Question 1:
(a) Explain in brief the characteristics of land with respect to its supply and use. [2]
(b) Briefly explain the percentage method of calculating elasticity of demand. [2]
(c) State two differences between labour services provided by a surgeon and a farmer. [2]
(d) State two reasons for consumer exploitation in India. [2]
(e) How does use of money solve, the problem of‘lack of double coincidence of wants’ that existed under the barter system? [2]

(d) The two reasons for consumers, exploitation in India are:

(e) Suppose a person possess rice and wants to exchange it for wheat. Under the barter system he had to find out a person who not only had wheat but also wants rice. But such a double coincidence was a rare-possibility. But With the use of money all the commodities can be easily exchanged and you do not need double coincidence of wants.

Question 2:
(a) Distinguish between stock of capital goods and capital formation using a suitable example. [2]
(b) State two circumstances under which the demand curve slopes upward to the right. [2]
(c) How does the central bank act as a fiscal agent to the Government? [2]
(d) A mild inflation is beneficial for economic growth. Justify the statement. [2]
(e) How can taxes be used for promoting economic growth? [2]

(b) The two circumstances are:

(c) As a fiscal agent to the government, it advises the govt, in matters relating to the fiscal, monetary and banking policies such as deficit financing devaluation, trade policy, foreign exchange policy, reduction in public expenditures, increase in taxes, public borrowings, policy of surplus budget etc.

(d) A mild inflation occurs when there is sustained rise in prices over time at a mild rate, say around 2% to 3% per year which helps in increasing the public revenue and thus helps the govt, to incur public expenditure for welfare of the people. Thus, it is beneficial for economic growth.

(e) Taxes are used to interact in the market, so as to induce a greater output of goods and services, resulting in the higher growth of economy.

Question 3:
(a) Classify the following into Fixed capital and Circulating capital: [2]

(b) State two examples of direct tax imposed by Central Government in India. [2]
(c) What is meant by CRR? Briefly examine its role in credit control. [2]
(d) Using hypothetical data show a market demand schedule. [2]
(e) How does money act as a store of value? [2]

(e) Money acts as a store of value. It means people can store their wealth in the form of money. Money is the most liquid form of wealth and it can foe stored without loss in value. Money enables people to save a part of their current income and store it for future use.

Question 4:
(a) State the difference between redeemable debt and irredeemable debt. [2]
(b) State two ways through which an entrepreneur contributes towards economic development. [2]
(c) How does proportional tax differs from progressive tax. [2]
(d) Distinguish between a tax and a subsidy. [2]
(e) Explain two methods of accepting deposits by commercial banks. [2]

Question 5:
(a) Discuss five characteristics of capital as a factor of production. [5]
(b) State the Law of Demand. Briefly explain any three determinants for the negative slope of the demand curve? [5]

Answer:
(a) Five characteristics of capital as a factor of production are as follows:

(b) The law of demand states that other things being equal, “A rise in the price of a commodity is followed by a fall in demand and a fall in price is followed by rise in demand. In other words, it states that there is an inverse relationship between the price of a commodity and its demand.
The three determinants for the negative slope of the demand curve are:

Question 6:
(a) Define Inflation. Explain any two fiscal measures and two monetary measures to control it. [5]
(b) Distinguish between the following:
(i) Extension and Increase in demand.
(ii) Normal goods and Inferior goods. [5]

Answer:
(a) Inflation is defined as “A sustained rising trend in general price level or a rate of expansion of money : income greater than the rate of growth of real output.” Under such circumstances, the general prices increases, and in turn the value of money decreases. Although, the circulation of money increases, the availability of goods is limited and this results in price rise.
Two fiscal and two monetary measures to control inflation are: 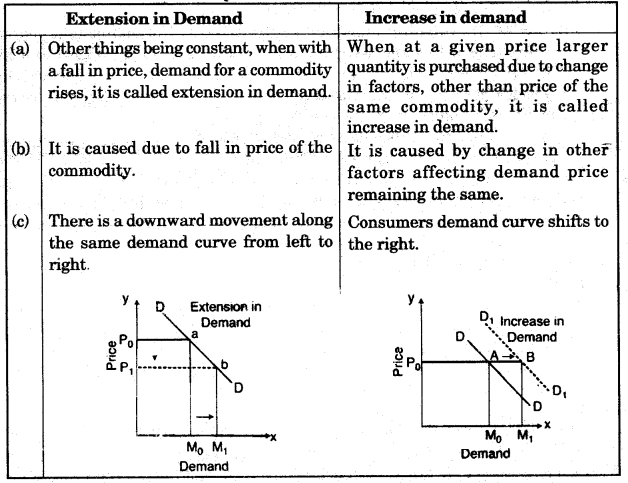 Question 7:
(a) With respect to division of labour state the following:

(b) Discuss five causes of the low rate of capital formation in India. [5]

(b) The five causes of the low rate of capital formation in India are as follows:

Question 8:
(a) Discuss the functions of the central hank as a ‘Banker to Banks’ and ‘Banker to the Government’. [5]
(b) Differentiate between the following:

Question 9:
(a) Using graphs distinguish between change in supply and change in quantity supplied. [5]
(b) Briefly explain any five rights stated in the Consumer Protection Act.
Answer:
(a) 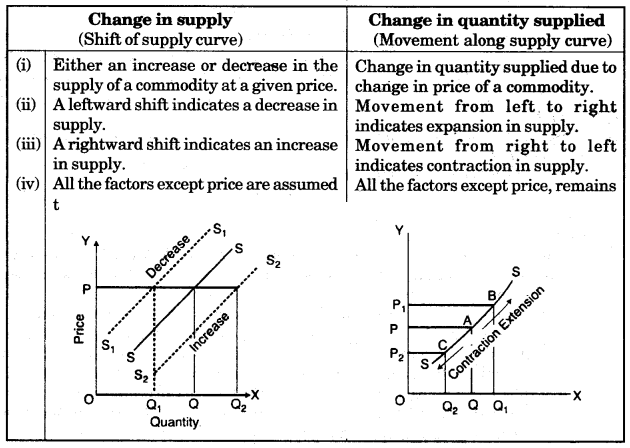 Right to safely: It implies the right to be protected against the marketing of such goods and services which are hazardous to our health and property. The goods and services purchased by any consumer should be safe. The producers should also strictly follow the safety rules and regulations while producing any goods or services. The consumer should preferably purchase branded products with ISI mark or Agmark or Hallmark.(b) The rights stated in the Consumer Protection Act are as follows:

Question 10:
(a) Discuss the reasons for the growth of public expenditure in India? [5]
(b) Explain three merits and two demerits of indirect taxes. [5]

Answer:
(a) Reasons for the growth of public expenditure in India:

(b) Three merits of indirect taxes: