Hindi Diwas is celebrated on the 14th of September to mark the adoption of Hindi as one of the official languages of India. It is usually celebrated in North India as it is the primary language of the north.

We have provided in this article an extended essay and a short essay along with ten lines on the topic, for helping students to write essays and give speeches on Hindi Diwas.

We have given below an extended essay composed of 500 words and a brief piece consisting of 100-150 words.

Hindi Diwas is celebrated as the onset of Hindi in the Devanagiri script as one of the 2 official languages of India. Besides, marking the pride of Hindi-speaking people, it also marks the freedom to speak Hindi.

On the 14th of September, Hindi was officially adopted by the constituent Assembly of India as one of its official languages. This meant that any reports or bills, written in Hindi would be acceptable in the parliament. Hindi is the language of almost 250 million people in India.

Since ancient times, Hindi has steadily developed with the help of Sanskrit and Pali. Modern-day Hindi has a significant influence on Sanskrit, and many Hindi words are borrowed from the Sanskrit scriptures. Hindi Diwas is celebrated with great pride and vigor. This is the day when everyone acknowledges the enriched language and its contribution.

Hindi is indeed a language that is very rich and has made major contributions to the field of literature. It is one of the sweetest languages and is regarded as one of the most popular ones.

Many well-known scholars have acknowledged Hindi because of its sheer simplicity and beauty. It can convey grave messages in simple words for ordinary people to understand and internalize. Hindi Diwas is celebrated with great pomp as people salute the contributions of the language.

Various events are held to acknowledge the language. Works of literature produced by Hindi authors, including Harivansh Rai Bacchan, Tulsidas, Kabirdas, and Munshi Premchand, are read out in public.

There can be no doubt about the fact Hindi is one of the most widely-known languages in India, and people take pride in speaking this language. Great men like Kaka Kalekar, Beohar Rajendra Simha, and Hazari Prasad Dwivedi led a robust campaign in favor of Hindi to be considered as an official language in India.

The 14th of September, 1949 also marks the 50th birthday of Beoar Rajendra Simha. Hindi Diwas is celebrated to recognize his efforts and hard work in the process of giving Hindi official recognition.

Most educational institutions organize events on this day and encourage students to take part. They acknowledge the importance of the language. Hindi acts as the primary medium of communication for tourists.

In educational institutions, students recite the poem, sing songs, and take part in essay writing competitions. The presentation of an exceptional award also marks this day. The President of India presents one distinguished individual with the Rajbhasha Award for his/her contribution towards the language. The award ceremony is held in Delhi.

Hindi was chosen as the official language of India to avoid linguistic conflicts. Since over 40% of the population speak Hindi, it was assumed to be the right choice.

Hindi is a much-regarded language close to our hearts. We must always remember the sacrifices our ancestors made to earn the liberty of speaking their language. 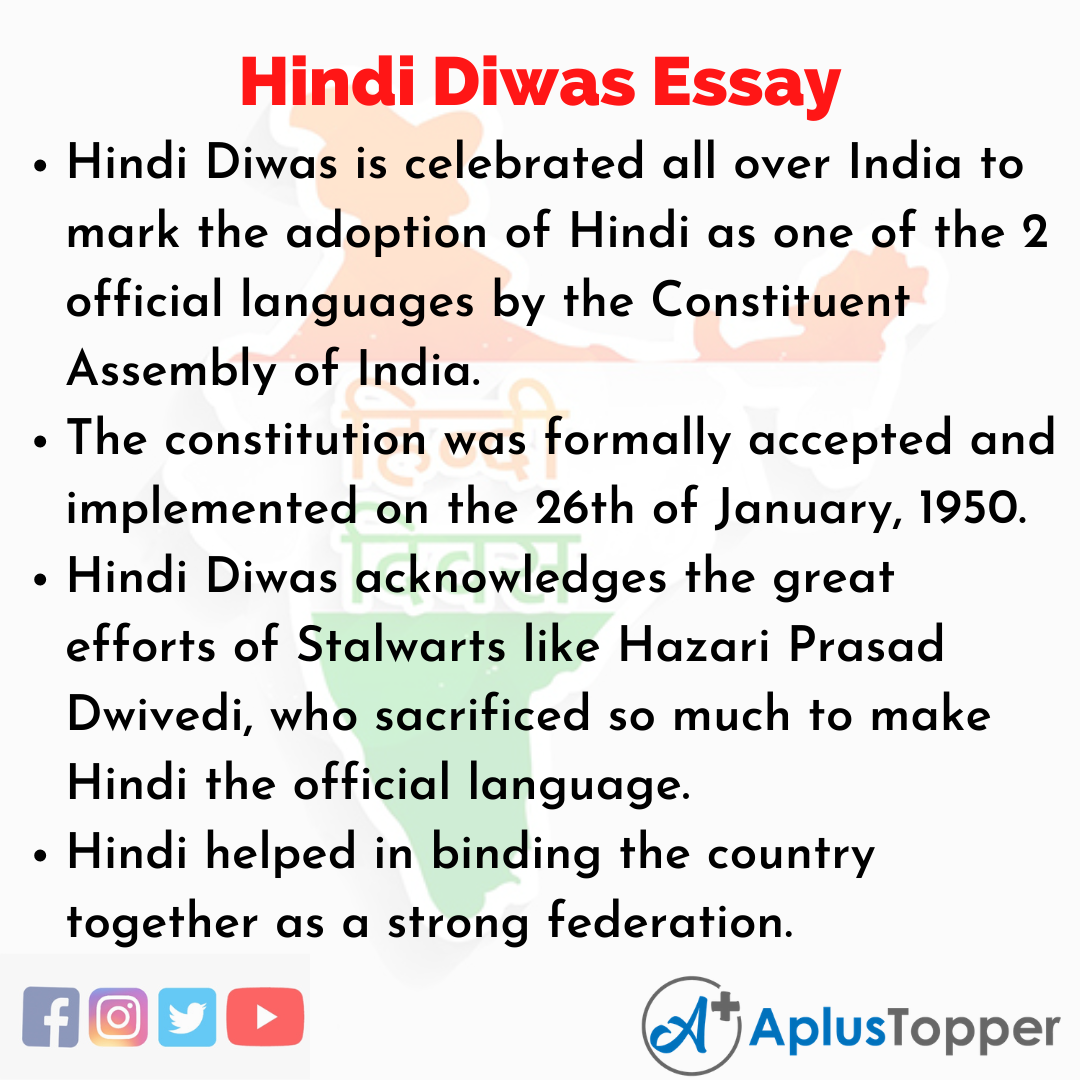 Short Essay on Importance of Hindi Diwas in English 200 words

The significance of Hindi Diwas lies in the long and extensive campaign lead by brave men like Kaka Kalekar, who sacrificed so much to earn this liberty. India faced intra-state conflicts after Independence.

The National adhesion that was present during the struggle for Independence was under significant risk as people from different linguistic communities started to fight for their languages. At this hour, Hindi was chosen to be one of the 22 national words to honor the diversity of India.

Thus, Hindi was, therefore, the string that held India together as a united nation. It proved to be the perfect solution to maintain India’s integrity and unity. 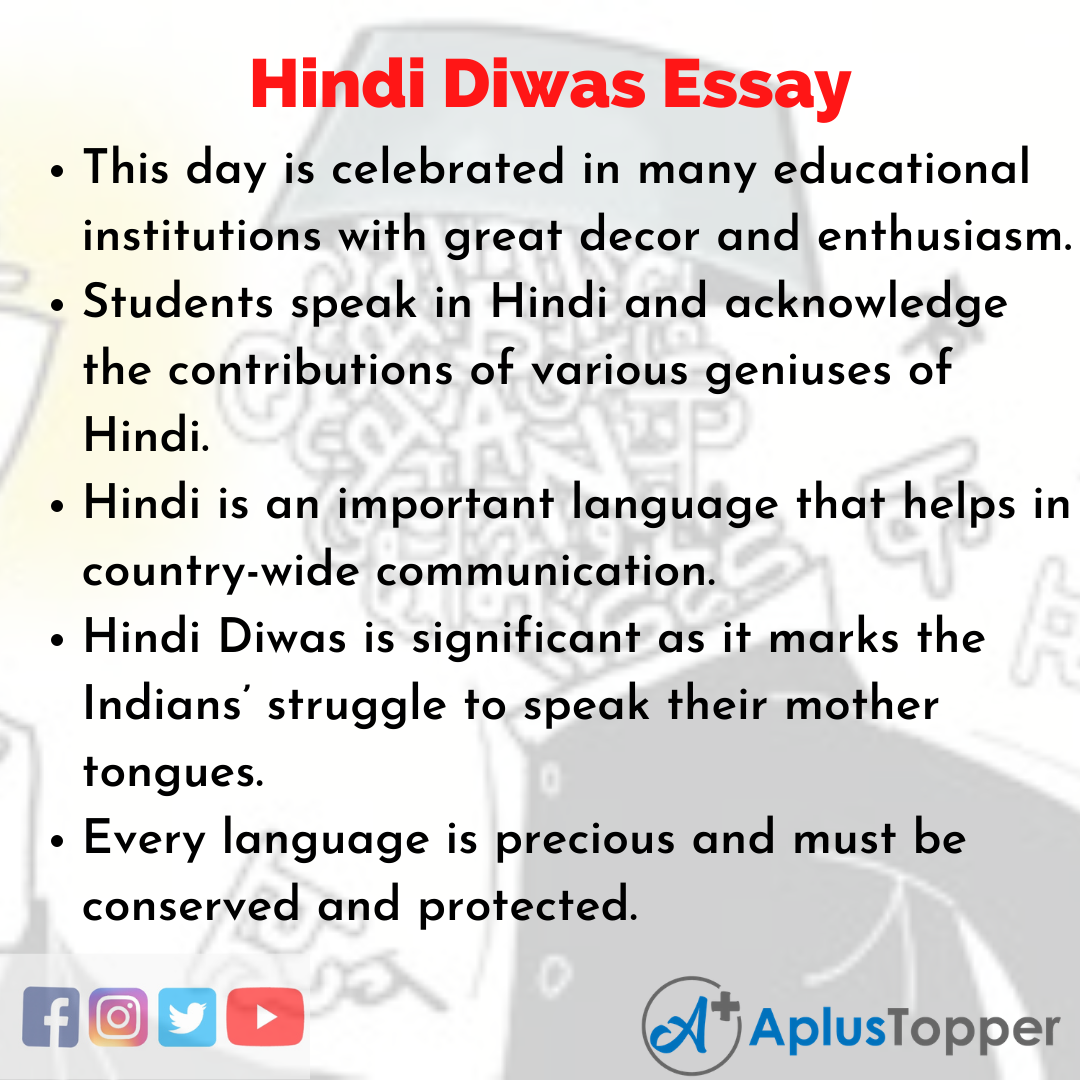 Question 1.
Who was Kaka Kalekar?

Answer:
Kaka Kalekar was an activist who led the rigorous campaign for the adoption of Hindi as an official language and also worked towards uplifting depressed castes.

Question 2.
Why is Hindi famous?

Answer:
Hindi is spoken by about 40% of our population and is the primary medium of communication in different states.

Question 3.
Who are some famous Hindi writers?

Question 4.
What is the Rajbhasha Award?

Answer:
The Rajbhasha Award is given every year, on the 14th of September, to an individual who contributes significantly to the field of Hindi.