Global Warming History Essay: The hottest topic that is doing the rounds is ‘Global Warming’.  It is easy for anyone to understand the term ‘global warming’.  It is a situation where the earth becomes warmer than it is supposed to be.  However, scientists define global warming as a situation where there is a gradual rise in the overall temperature of the earth’s atmosphere.

Several scientific logics explain the reason for the increasing temperature of the earth’s atmosphere. One such reason goes back to 1896, when Svante Arrhenius, a Swedish scientist, predicted that global warming could occur due to fossil fuel combustion. Global warming did not come into existence over-night.  It is the product of a series of events that led to the current state of affairs.

Given below are two essays in English for students and children about the topic of ‘History of Global Warming’ in both long and short form. The first essay of 400 to 500 words is on ‘History of Global Warming’ for students of class 7, 8, 9, and 10.  Moreover, it is helpful for the aspirants of competitive exams. Furthermore, 150 – 200 word’s essays will help students and children studying in class 6 or below.

Long Essay on History of Global Warming 500 Words in English

Global warming is a phenomenon where there is a sustained rise in the average temperature of the world.  The accumulation of greenhouse gases, carbon dioxide, and other pollutants in the air, blanket the earth’s atmosphere.  They absorb the heat from the sun.  Generally, when the heat of the sun reaches the earth’s surface, it bounces back into space.  However, due to the greenhouse effect and other contributors to global warming, the heat cannot escape the earth’s atmosphere, thereby increasing the world’s temperature.

Global warming is a gradual process over several decades.  Both natural and human activities stimulate the rise in the earth’s temperature. The natural factors, the solar cycle, volcanic eruptions, and the El Nino effect, influence the warming up of the planet.  Human activities are the chief contributor to the increased concentration of nitrous oxides, methane gas, and carbon dioxide.  Furthermore, deforestation, industrialization, livestock production, usage of aerosols, etc. are some of the human-created causes of global warming.

Gradually, the significant portion of the earth’s ice started melting. Indication of the early signs of global warming was in the 19th century.  The first industrial revolution was instrumental in increasing the level of greenhouse gases.  It drove up the average temperature of the earth by 1-degree Celsius.  Between 1850 to 1890, the average global temperature was approximately 13.7 degrees Celsius.  This is also the period when the arctic region and the tropical oceans began warming up.  After two decades, Asia, North America, and Europe also showed signs of climate change.

In 1896, Svante Arrhenius, a Swedish scientist, calculated that global warming could occur due to fossil fuel combustion.  The Second Industrial Revolution 1870 – 1910, and World War I 1914 – 1918 damaged the earth’s atmosphere.  Though World War II ended in 1945, it left a dent in the ozone layer.  In 1956, Gilbert Plass evaluated how infrared radiation and the rising CO2 is warming the planet earth by 3.6 degree Celsius.  Furthermore, Prof. Revelle established that the ocean could not absorb all the  CO2 emissions produced by humans.

In 1969, the Nimbus III satellite recorded the shift in the global atmospheric temperature. The growing concern inclined people to celebrate the first Earth Day in 1970 to preserve  Mother Nature. In 1975, scientists investigated the traces of gases in the stratosphere obstructed airplane flight.  In 1979, the concern about the earth’s changing climate led to the first World Climate Conference to discuss the remedies of global warming and climate change.

Though humans have aggravated the situation of global warming, they gradually understand their consequences.  They have begun to take responsibility for changing the climatic conditions around the world.  It is too late to prevent the occurrence of global warming. However, our efforts can delay it. 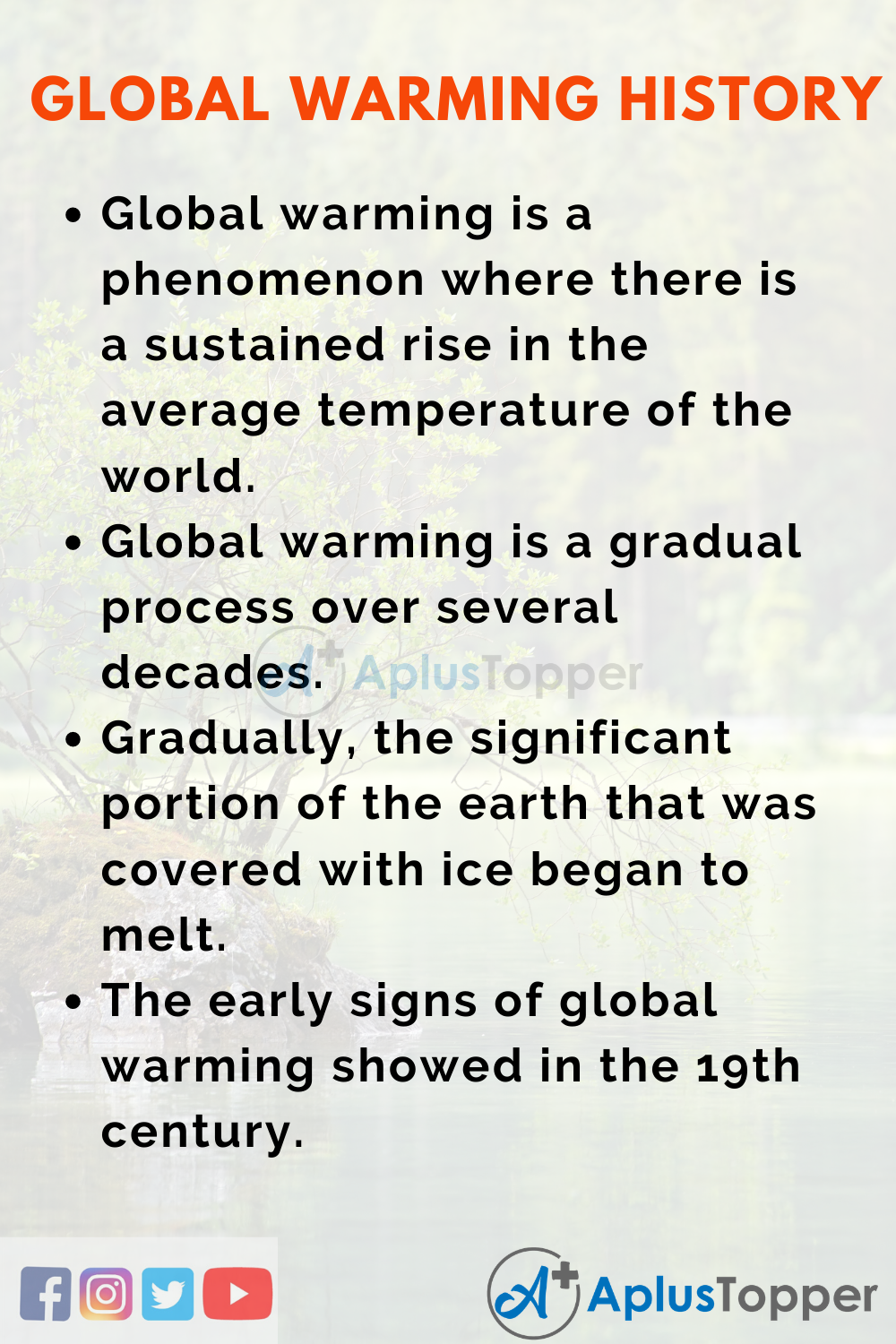 Global warming is a crisis condition where the ozone layer traps toxic gases, such as greenhouse gases, carbon dioxide, nitrous oxides, methane, etc. These trapped gases on the earth’s surface are causing the earth’s temperature to rise.

Initially, the earth was covered with ice. The tilt of the earth towards the sun began to melt the frozen land.  With the invasion of humans, the emission of greenhouse gases began to increase. The industrial revolution was instrumental in giving thrust to the level of CO2 radiation. In 1896, Svante Arrhenius warned that fossil fuel combustion would lead to global warming.

Furthermore, World War I in 1914, and World War II in 1945 created a dent in the ozone layer. In 1969, the Nimbus III satellite recorded the shift in the global atmospheric temperature. In 1979, the first World Climate Conference was held to find solutions to the growing concern of global warming.

The pre-industrialized level of 290 ppm (parts per million) carbon dioxide gas infused in the atmosphere has reached 410 ppm of CO2 today.

We should begin to count our carbon footprints to slow down the pace of warming of the earth.

10 Lines About the History of Global Warming

Students who are preparing for competitive examinations or entrance examinations can use this piece for reference.  Moreover, children can take note of these points to help them deliver a speech on the stage. Children who are planning to participate in literary work or debate competition can also find it very useful. 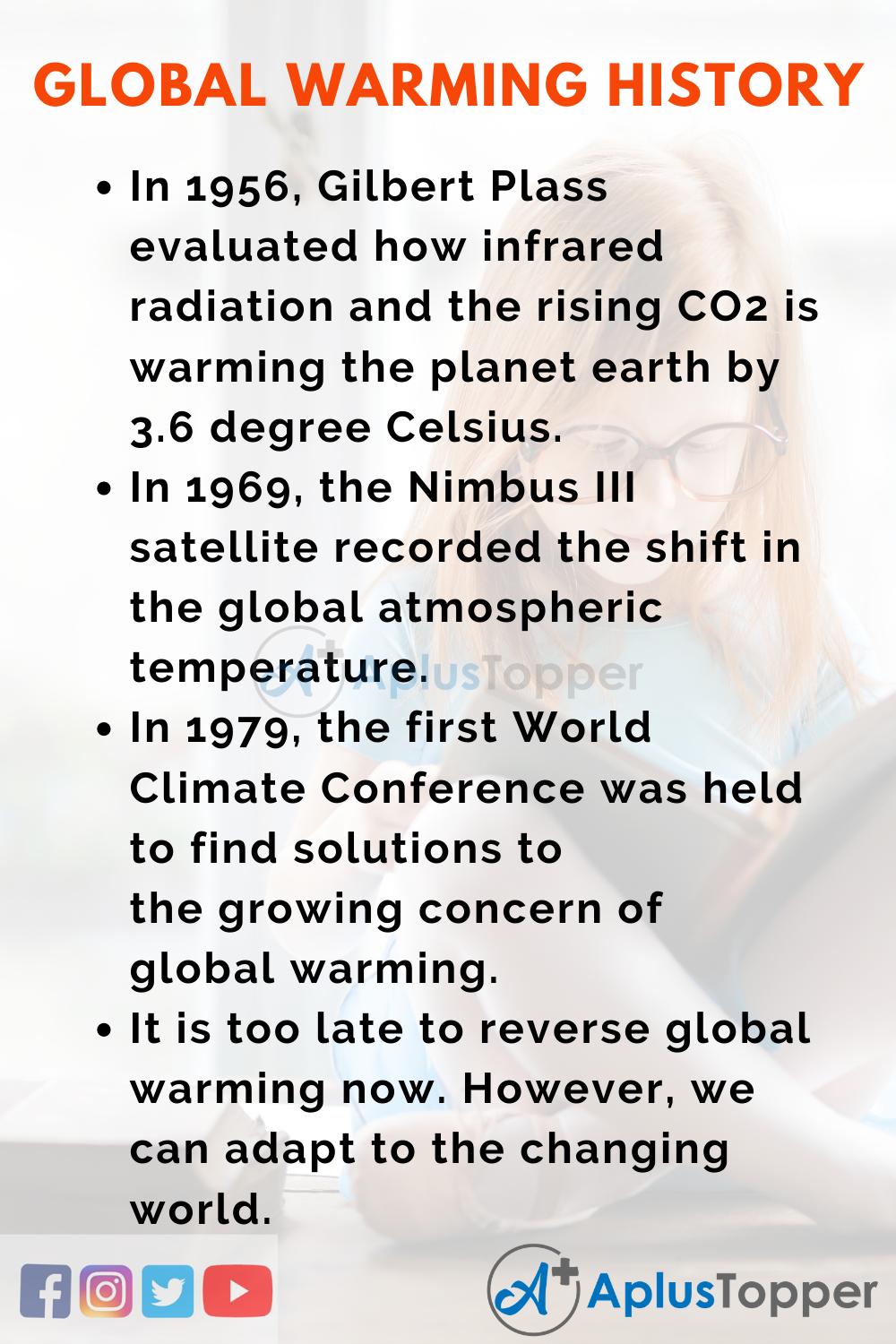 Question 1.
What is the effect of global warming on climate change?

Question 2.
What purpose does the burning of fossil fuel serve?

Question 3.
How fast is the average global temperature increasing?

Answer:
The current rate of increase in average global temperature is 6 degrees Celsius.

Question 4.
How did we first come to know about global warming?

Answer:
The first sign of global warming was evident when extreme temperature fluctuation was recorded in the tropics.