Cricket Slogans: Cricket is by far the most commercial and one of the most celebrated games in India. Although it is not the national game of the country, it is played in every nook and corner of the country. From kids to the elderly, there is not a single person who has never watched a match.

The Indian National Cricket team has the most respectable players of the country. The current cricket men’s team is captained by ViratKohli, while MithaliDorai Raj captains the women’s cricket team. The game is treated as nothing less than one’s religion here.

Slogans on Cricket in English

The earliest games of cricket began in the 16th century, somewhere in south-east England. The evolution of the game on a global scale took place during the 19th and the 20th centuries. In the 21st century, there are test matches, one day and Twenty20 international matches.

Slogans help in catching the eye of a set of people, to generate awareness and to appreciate a belief. Cricket is something that deserves praise and public attention. 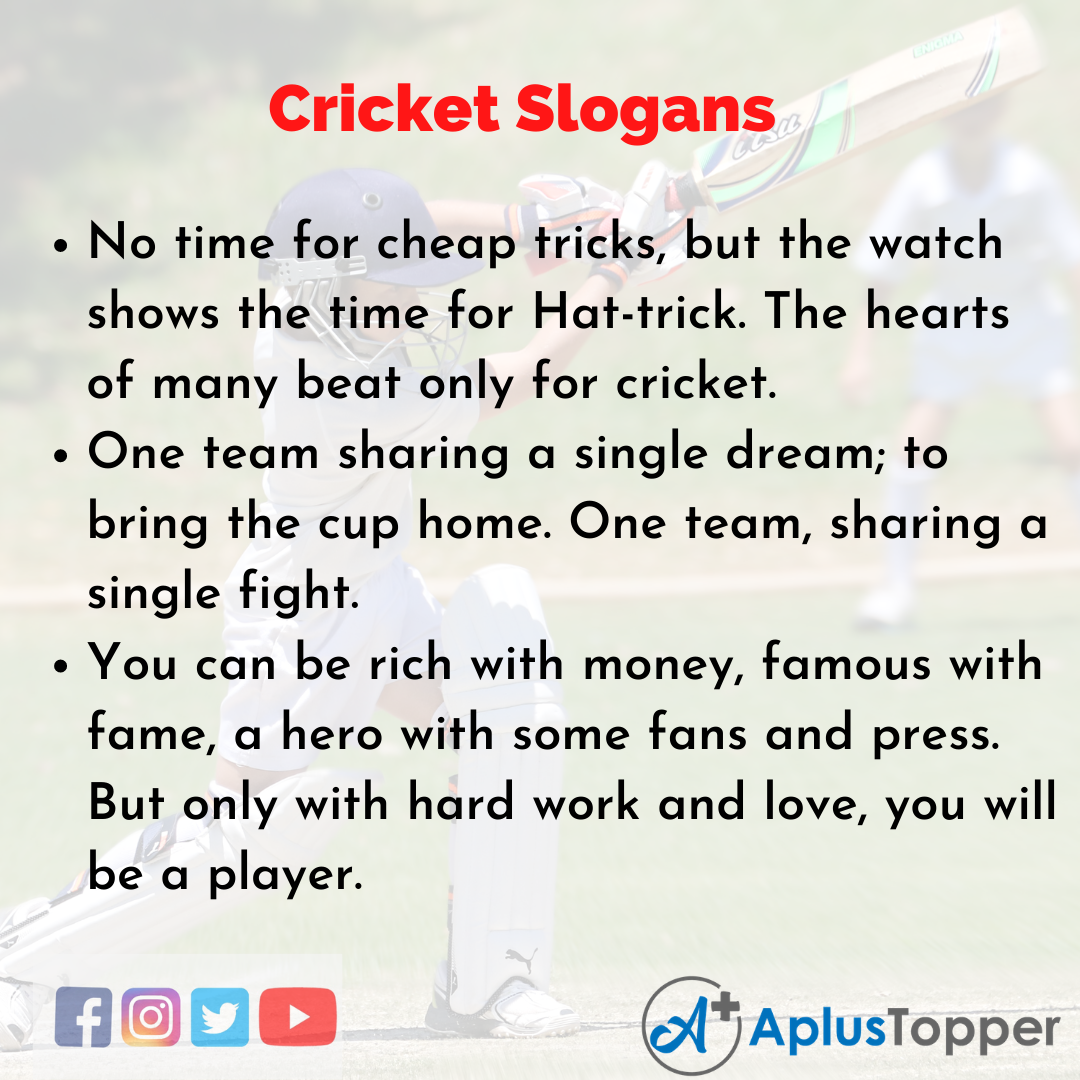 15 Unique and Catchy Slogans on Cricket

1. No time for cheap tricks, but the watch shows the time for Hat-trick. The hearts of many beat only for cricket.
2. One team sharing a single dream; to bring the cup home. One team, sharing a single fight.
3. Either hit a wicket or give a free hit. The excitement is equal for both. The hearts will beat for both.
4. You can be rich with money, famous with fame, a hero with some fans and press. But only with hard work and love, you will be a player.
5. Cricket is never simply a game; it is an array of emotions; it is a basket of love. The passion for it is very much contagious.
6. In this country, people love cricket, dream cricket, speak cricket and breathe it too.
7. Cricket has a place next to religion in this country, and the players have a place next to god.
8. You will never know you is more tensed, a player or the fans, during a nail-biting cricket match. The stumps can cut the tension.
9. Annoy a cricket fan with something about the game, and you may as well call the devil upon you.
10. In cricket, you cannot be born as a hero, but you can be made one. The only secret weapon is hard work.
11. Your coach can never speak as loud as your game can. Let your game do the talking.
12. You can make all the difference between an ordinary match and an extraordinary one with a bit of fire in your game.
13. To play the best game of cricket, the most important thing is to be united.
14. By constant practice of your game, you can make it up a little, but by never giving up your game, you can make sure to stay for the long haul.
15. A game of cricket is much similar to our life; highly unpredictable, with an unexpected turn of events, and not knowing who’s in for a duck or a century. Question 1.
What are some famous cricket video games?

Answer:
For a game which has such a high status, cricket also comes in the form of video games. Several franchises have brought enjoyable video cricket, like Don Bradman Cricket, either 17 or 14, EA Sports Cricket 2005, or 07, Ashes Cricket 2009, Cricket 19, International Cricket Captain.

Question 2.
The ICC Cricket World Cup titles have been won by which teams?

Question 3.
Is it legal to play online cricket?

Answer:
Online cricket is more commonly known as fantasy cricket. Since such platforms also give the scope for betting and gambling, so it a general query if it is legal. The Indian law does not state anything about any online betting, nor anything is stated against skill-based games. So it is a grey area, whether it is legal or not.

Question 4.
Where can we play fantasy cricket?

Answer:
There are numerous websites and platforms where you can easily enjoy fantasy cricket. Websites like Dream11, 22Bet, Parimatch India, Betchips provide you with good gaming options. The interface is excellent.