Conservation of Biodiversity Essay: Mother earth is the home for various species and a place where they can coexist.  The term biodiversity is a combination of two words – biological and diversity.   It means diverse living organisms simultaneously sustain themselves in an ecosystem.  The ecosystem encompasses various communities of creatures, including forests, coral reefs, wildlife, microbes, etc.  A surprising number of 8.7 million species inhabit the planet earth.

The existence of biodiversity is an essential element of the planet earth.  Every organism is interdependent and interconnected with one another.  Everything on this planet is in an intricate web.  However, human’s exploitation of the resources is threatening the ecological balance of biodiversity.  Thus, it becomes essential to conserve and support all the species.

Biodiversity is an amalgamation of two words – biological and diversity.  Therefore, the definition of the term ‘biodiversity’ encompasses a large variety of living organisms coexisting in an ecosystem.  Biodiversity ranges from the tiniest microbes to the largest mammal.  It also includes several species of bacteria, plants, animals, and humans.  The recent study discovered 8.7 million different species worldwide, out of which a normal man recognizes only 1.2 million species.

However, the existing biodiversity is at risk.  Both natural and human-activities are contributing to degrading the ecosystem. The changing climate and infestation of alien species are threatening the current biodiversity. Furthermore, in the pursuit of modernization, urbanization, and aggressive ambitions, humans are exploiting the natural habitat.  Several factors, such as habitat fragmentation, atmospheric pollution, over-consumption of the natural resources by the humans, etc. are putting additional pressure on the planet.

Over one million species are on the verge of extinction. Humans have altered the environment in the quest to dominate the planet.  Thus, the vast wealth of the earth is gradually vanishing.  There are such thirty or more spots on the planet where several species are under the threat of extinction.  Scientists have termed these regions as biodiversity hotspots.   These biodiversity hotspots are home to 60% of different kinds of species.

The need of the hour is to participate in conserving biodiversity.  Another word for conservation is caring for the environment.  The first step to prevent dwindling biodiversity is to protect the plants and animals in their natural habitat.

It would be possible to create a safe habitat for various species by putting an end to the fragmentation of land for selfish purposes.  Several species are sensitive to pollution.  For instance, salmons can only thrive in freshwater.  The concentration of toxic chemicals in the stream may lead to a declining population of salmons.  Furthermore, the burning of fossil fuels gives rise to carbon dioxide emission, which is harmful to some species.   A large number of species become homeless as a result of deforestation.  Moreover, deforestation also leads to climate change. It harms migrating species.

Native plants and animals survive when they interact with the environment freely.  It would be best not to disturb them in their natural habitat.  Thus, humans need to take responsibility for their actions, and consciously stop polluting the environment. 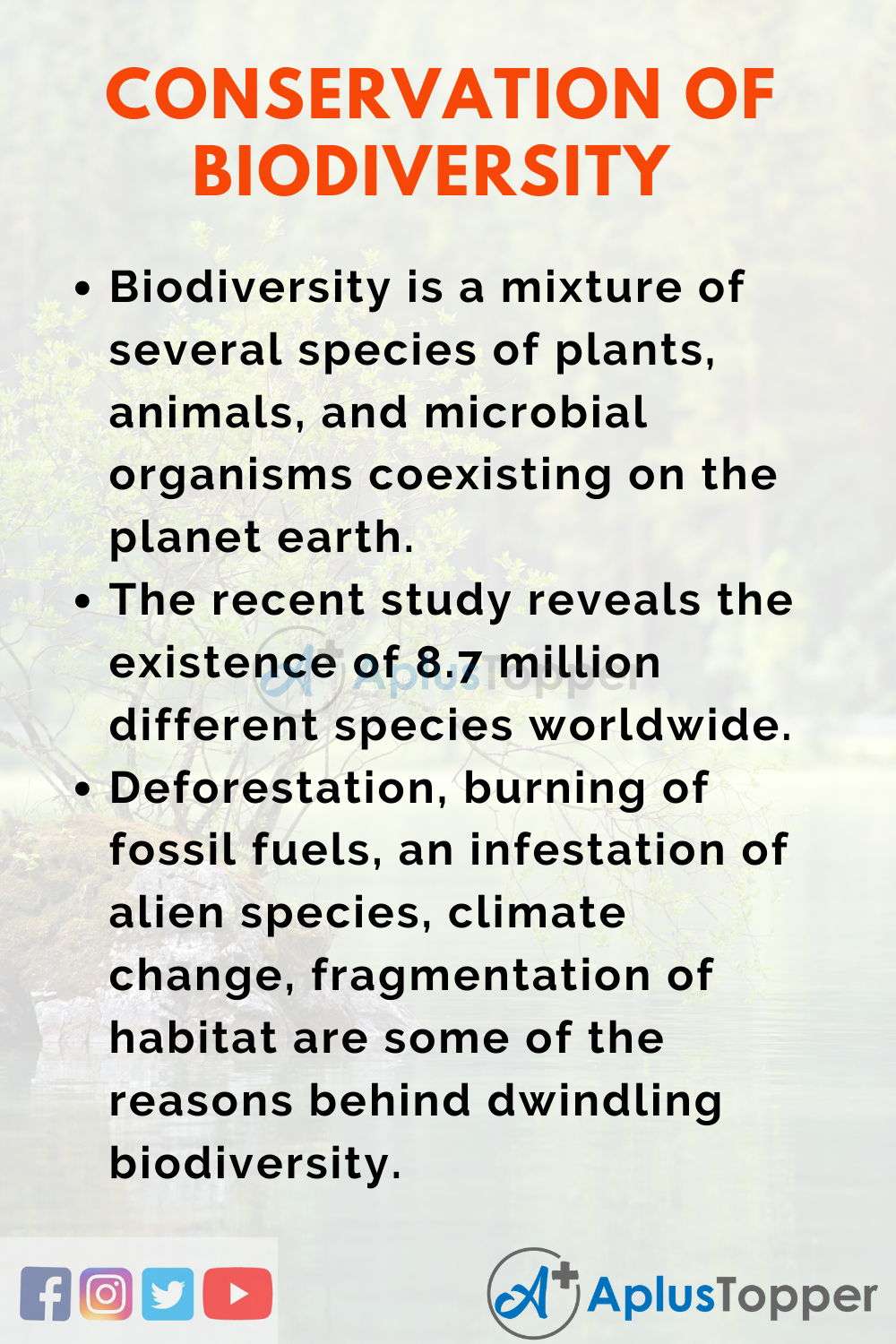 Short Essay on Conservation of Biodiversity 200 words in English

Below we have given a short essay on ‘Conservation of Biodiversity’ of 150 to 200 words. This short piece on the topic ‘Conservation of Biodiversity’ is perfect for all students of grade 6 and below. Biodiversity consists of all living organisms on the earth.  It includes a variety of life forms, from plants, animals, bacteria, to fungi.  However, in today’s time, the earth is losing  flora and fauna as well as genetic diversity.

Owing to the dominating human species, several other species of plants and animals are becoming extinct at an alarming rate.  Pollution, deforestation, global warming, over-exploitation of the ecosystem, and impulsive hunting of animals diminish the earth’s natural biodiversity.

Human beings are the greatest threat to biodiversity.  Scientists have identified more than thirty regions in the world as global biodiversity hotspots.  On the one hand, these areas have abundant resources.  On the other hand, these are high-risk areas of endangered species. In ecosystems, every creature is interdependent and interconnected.  Elimination of a single species can disrupt the entire food chain.

In the quest to conserve biodiversity, it is compelling to reduce carbon footprints.  Afforestation, reusing, recycling, and reducing waste can contribute to protecting biodiversity from further harm.  The creation of wildlife sanctuary and biodiversity reserves can aid in the natural restoration of biodiversity. Thus, for the survival of every species, including humans, we must conserve biodiversity.  We should set an example to inspire the next generation to follow the same path.

10 lines on Conservation of Biodiversity Essay in English

Students who are preparing for competitive examinations or entrance examinations can use this piece on ‘Conservation of Biodiversity’ for reference.  Moreover, children can take note of these points to help them deliver a speech on the stage.   Children who are planning to participate in literary work or debate competition can also find it very useful. 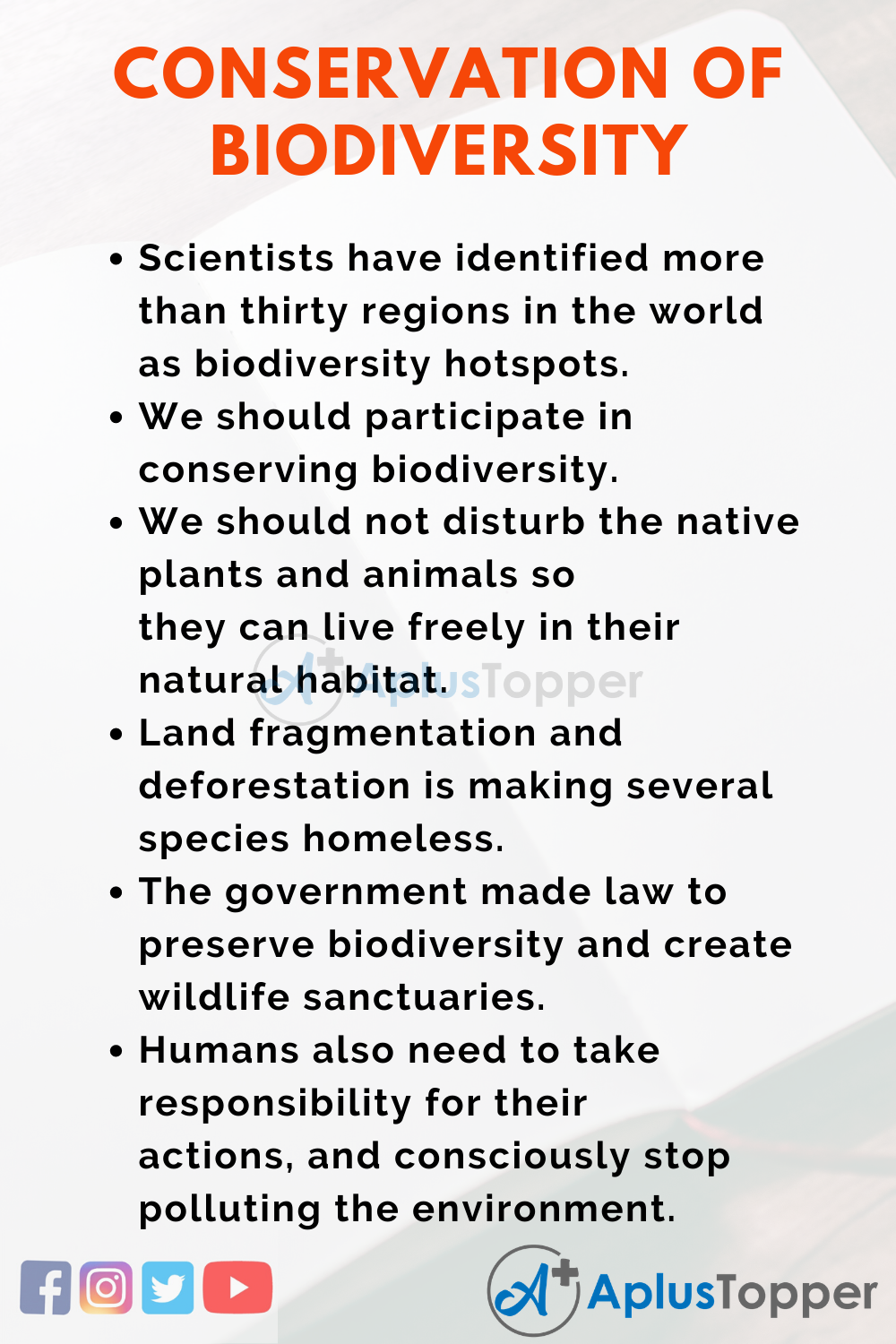 FAQ’s on Conservation of Biodiversity Essay

Question 1.
Which factor is responsible for dwindling biodiversity?

Question 2.
What is the figure of different species that inhabit the planet earth?

Question 3.
What do you mean by biodiversity hotspots, and how many are there currently?

Question 4.
How can an ordinary person conserve biodiversity?

Answer:
It is essential to cut down on exploiting the earth’s resources.  Humans should restrict their activities that are harming the natural environment.  We should make a collective effort to stabilize various species around the world.