Biodiversity Essay: Biodiversity refers to all the wildlife and plant life that is around us, all over the world. It refers to the plentitude of flora and fauna around the planet earth, microorganisms included. Biodiversity is incredibly essential to the planet, as it is what maintains the balance of ecological systems on the earth. As the name suggests, ‘biological diversity’ or ‘biodiversity’ refers to the enormous and diverse range of biological creatures and living beings on the planet. Many different kinds of organisms are classified under the broad topic of biodiversity. These range from the largest Blue Whales to the minuscule bacteria living on our fingertips, and the tallest trees to the smallest plants which are the mere size of mustard seeds.

Below we have given a long essay on biodiversity of 500 words is helpful for classes 7, 8, 9 and 10 and Competitive Exam Aspirants. This long essay on the topic is suitable for students of class 7 to class 10, and also for competitive exam aspirants.

Biodiversity is all around us, in the potted plants and mosquitoes in our homes, to the millions of species of animals and plants that exist in the deepest forests and jungles in the world. In simple words, biodiversity refers to the plentitude of flora and fauna around us in the world, on planet earth. It plays an incredibly necessary role in the world around us, as each organism, whether plant or animal, has a relevant role to play in its ecological system.

So why is biodiversity important in the first place? The answer to this question is much more simple than you’d think it to be – biodiversity is important because it is what our planet earth is made of. Whether we are talking about the hydrosphere or all of the earth’s land, it is filled with all kinds of animals, plants, and microorganisms. Thus, if these organisms, also known as the biodiversity of planet earth, keep constantly depleting, there will be nothing left of our planet.

There are thousands of species today that are endemic to specific regions in the world, which means that if the ecosystems in those regions cease to exist, these species of flora and fauna will, too. For example, the lemurs of Madagascar are endemic to Madagascar. Due to human-made circumstances, ecosystems are being destroyed, resulting in endemic species being put under the category of endangered. Endangered species are those on the verge of extinction, more often than not, due to unnecessary human activities. The Bengal tiger is endangered, and dodo birds have been extinct for centuries now. Another word for Conservation of Biodiversity is caring for the environment.

In today’s world of new advancements in infrastructure technology everyday, world leaders find it necessary to cut down a lot of trees in forests. This process is also called deforestation and is extremely harmful to the environment. The harm to the environment is due to the loss of trees which provide us oxygen and the multitude of organisms that depend on the ecosystem that these forests provide for them. Kilometers worth of forests are cut down in the name of development, reducing the biodiversity on our planet by tens of thousands with every ecosystem destroyed.

Even though biodiversity is decreasing, there are ways to restore it, even if not completely to its full extent. The best way to do this is reforestation, which refers to replanting trees to allow the forest to grow its trees back. Another solution to battle the loss of biodiversity is to spread awareness about the repercussions of the same. Governments have gone to the extent of setting up forest reserves and conservatories to protect the wildlife and flora of specific forest regions. This shows concern and responsibility on the part of these governments.

It is essential to restore biodiversity in the world. For this to happen, humans must take control of our questionable actions against ecosystems around the world. It is time to take care of and protect the earth’s flora and fauna much better than we have been in the past. 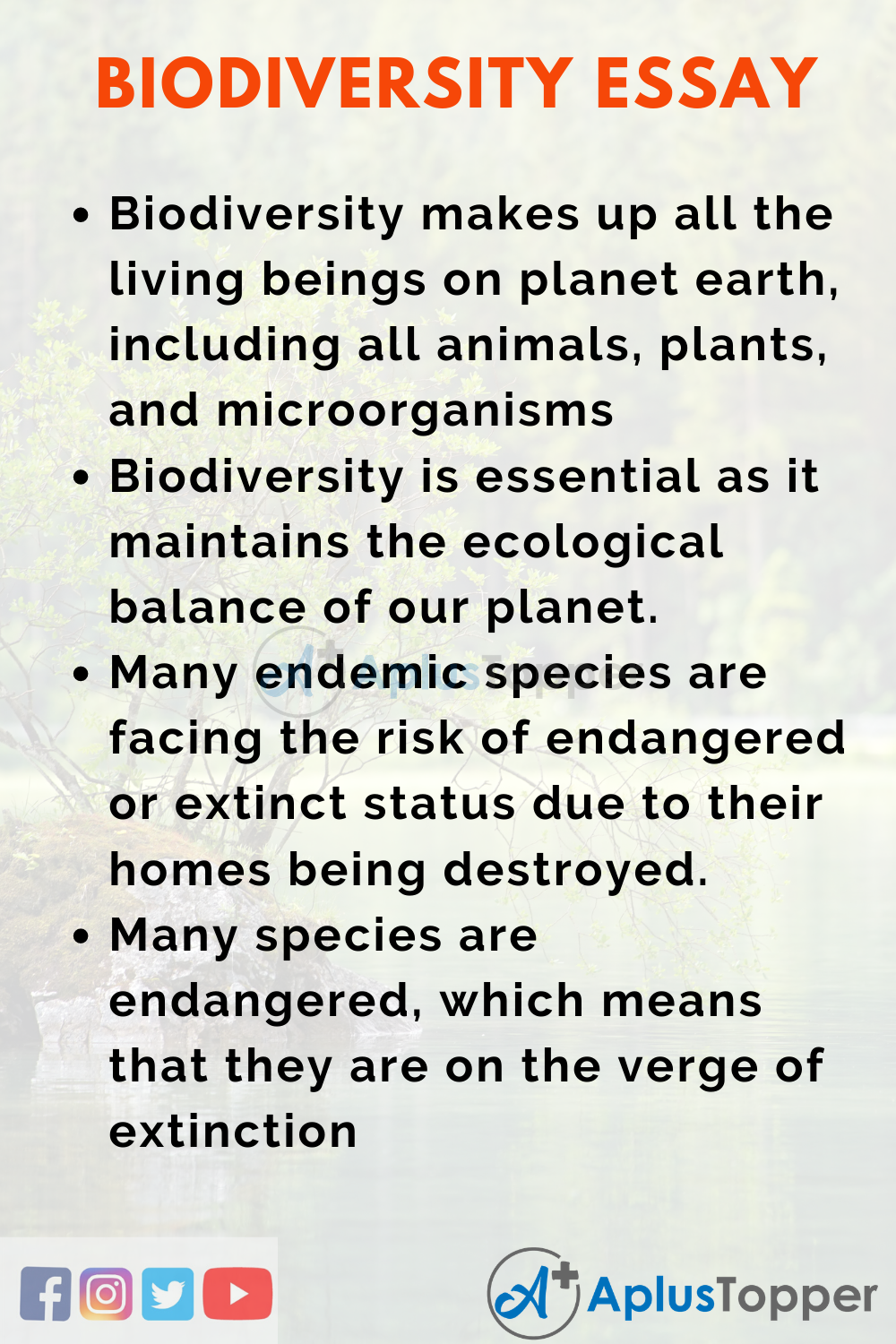 Below we have given a short essay on biodiversity is for Classes 1,2,3,4,5 and 6. This short essay on the topic is suitable for students of class 6 and below.

Biodiversity refers to the collection of all the plants and animals on the entire planet earth. All the plants that we grow in our house, the trees in forests, the animals in the water, and even the spiders that make webs on our house walls sometimes, are all part of biodiversity. Even the tiny creatures that we cannot see without using a microscope are part of the biodiversity of our planet.

There are millions of species of plants and animals across the earth. There are different types that we find on land, in water, in snow, in the rain, etc. Different types of climate such as hot, cold, humid, dry, etc. all have different kinds of biodiversity that live in such weather.

Some of the human activities can sometimes be really terrible for the environment, such as cutting down trees to build a structure there instead. Trees are important because they provide us with oxygen which we breathe, and they are also home to many different species of animals, microorganisms, and external plants. For example, the monkeys will have no place to go if all the trees get cut down.

Biodiversity is what makes earth what it is. Because of all of this, it is crucial to conserve the biodiversity of the planet. 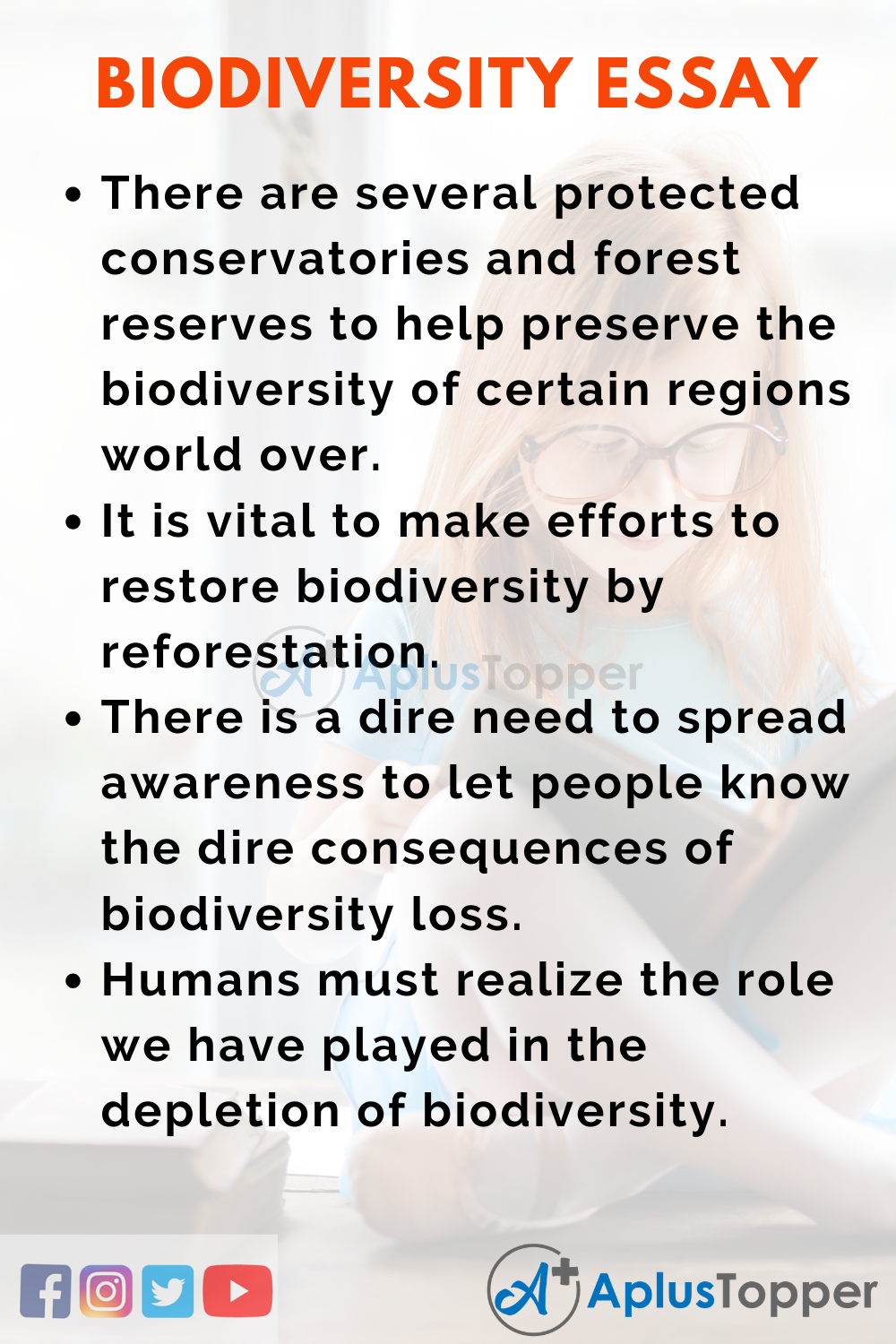 Question 1.
What does biodiversity mean?

Answer:
Biodiversity refers to the collection of every species of plants, animals, and microorganisms all over the planet.

Question 2.
Why are forests important?

Answer:
Forests house millions of trees, which are the living beings that provide us with the oxygen that we breathe. Forests also house millions of different flora and fauna species that are essentially dependent on each other for survival of themselves and the earth.

Question 3.
Why do we need to conserve the biodiversity on earth?

Question 4.
What can I do to help the earth?

Answer:
You can help to spread awareness about why saving the earth’s biodiversity is vital, and you can participate in ecological events like tree plantation drives. You can donate money to charities that work towards conservation practices and protest development that requires the destruction of forests and biodiversity.