What is a salt?

A salt is formed in a neutralisation reaction between an acid and a base. Salt is a general term used for the substances that are formed when an acid and a base react with each other.
This reaction is called a neutralization reaction.
Acid + base → salt + water
A salt is an ionic compound consisting of a cation such as a metal ion or an ammonium ion from a base and an anion from an acid.

Hence, a salt can be defined as follows.
A salt is a compound formed when the hydrogen ion in an acid is replaced by a metal ion or an ammonium ion. 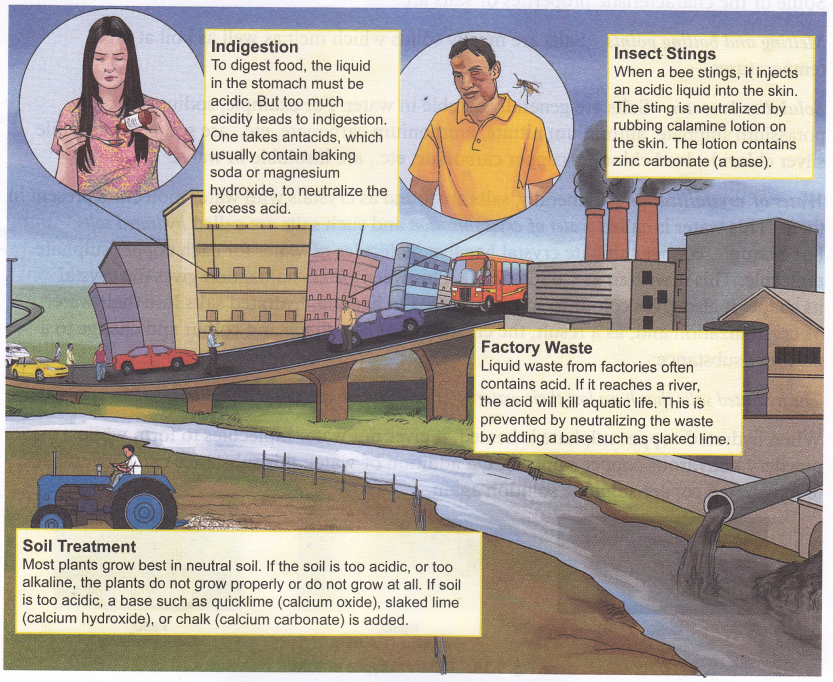 1. Normal salt : A salt that does not contain any replaceable hydrogen atoms or hydroxyl groups is called normal salt.
Examples :
Na2SO4 obtained in the reaction between H2SO4 and NaOH is a normal salt because it is formed by the complete replacement of both the H atoms of H2SO4,
Similarly, calcium su1phate (CaSO4), sodium phosphate (Na3PO4) and potassium phosphate (K3PO4) are also normal salts.

2. Acid salt : When a polybasic acid is not completely neutralized by a base, the salt produced will contain replaceable hydrogen atoms. Hence, it may further take part in the reaction with the base as an acid. Such a salt is called an acid salt. For example, the salt NaHSO4 produced in the reaction between NaOH and H2SO4 is an acid salt because it is capable of further reaction with the base NaOH to produce the normal salt Na2SO4.

Thus, an acid salt may be defined as follows.
A salt that contains replaceable hydrogen atoms is called an acid salt.
Examples :
NaHSO4, NaH2PO4 and Na2HPO4 are examples of acid salts.

3. Basic salt : When a polyacidic base reacts with lesser amount of acid than is necessary for complete neutralization, the salt produced contain hydroxyl group(s) (OH) also. Such a salt is called a basic salt.
Examples :
1 mole of Pb(OH)2 requires 2 moles of HCl for complete neutralization. But when 1 mole of Pb(OH)2 is made to react with 1 mole of HCl, some Pb(OH)2 is left unreacted. The salt produced is not PbCl2, but Pb(OH)Cl.

Similarly, when one mole of Bi(OH)3 is reacted with 1 mole of HNO3, the salt Bi(OH)2NO3 is formed.

Salts like Pb(OH)Cl and Bi(OH)2NO3 contain the OH group. These salts are called basic salts, because they can further react with the acids to form H2O and the corresponding normal salts.

Thus, a basic salt is formed when a poly acidic base reacts with a lesser amount of an acid than is necessary for the formation of a normal salt.

Solubility of salts in water

Table: Solubility of salts in water