Nehru Ji had a glorious love for children and considered that children are the upcoming future creators of the nation. If we need to preserve our future, then it is the duty of all of us to build the future of these children in a better direction. In a glimpse of his love for children, our land began to remember his birthday as Children’s Day. The main purpose of this celebration was to make all the citizens of India aware of giving rights to children to get the education. It is their right to grow in the right direction and hence a well-organized and wealthy nation can be developed, depending on the future of the children.

Since Jawaharlal Nehru used to say that the property of any nation is not in its repository but in their schools, hence we should recognize our children as the wealth of the country and protect them and develop their future

Children’s day is commemorated with great joy in our nation. On this special day Pt. Jawaharlal Nehru is given tribute. The folios of the life of Pt. Nehru are turned on this day and the offering arranged by him for the betterment of the kids is told.

“If You Carry Your Childhood With You, You Never Become Older – Happy Children’s Day” 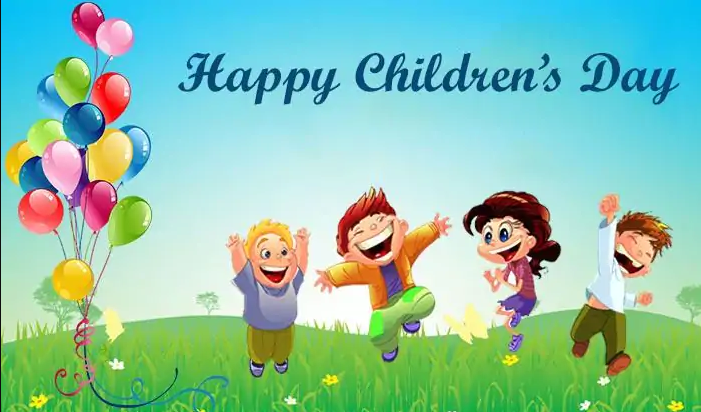 Children’s Day is celebrated in many ways. Especially in schools, events are arranged to rejoice children’s day and several kinds of competitions are conducted. At this festival, children are made knowledgeable of their rights and responsibilities. Picnics and various sports activities are arranged to host small children. Many kinds of programs are also conducted on radios and television which guide the children. This essay is also a helpful essay on children’s day for class 4, Class 6.

Children’s Day has party organizations in our life. In India, it is rejoiced by arranging some cultural events and celebrations. But we do not even comprehend its primary purpose. Children’s Day is dedicated to the care of children, but there is still a lot of consideration needed in India.

Children have been freed from child labor based on the Force labor Act law, but still, we have failed to give an identification to their development. It is just not the government’s responsibility but the moral duty of all of us to save the fate of the children. Many non-government voluntary organizations are also working for the development of Children. The youths of today are the eternity of India. If we need to make our country great, then we must pay attention to these innocent souls. Only then our nation will become prominent.

We should know the feeling of children and not let the children’s Day be confined to cultural events and ceremonies, but to put effort into something for the children who are going through the darkness of life. We require a children’s Day where not only schools but each child living in the society can recognize that they too have a presence in this nation. They also hold equity to live a virtuous life in this land. It is necessary because they are deemed to be the future of the realm and if they are conscious of their rights and liabilities from childhood, they can raise their voices against the wickedness and exploitation experienced by them

Therefore, we should take an oath to not only serve children on Children’s Day but each Day for their well being and benefit and help them to accomplish their dreams securely.

Points to Help Children of Our Country

Conclusion About Children’s Day in English

Children’s Day is not a common day, it is an exceptional day recorded to give awareness of the rights of the coming generations of our nation. In a developing nation like India, its value increases indeed more because of the emerging prosperity, there is regularly an event of child labor and child benefits exploitation. Therefore, not only the children but also their parents must give full information about the basic rights of children and try to make them more and more aware of this subject.

Question 1.
What is the importance of Children’s Day?

Answer:
Children’s day is celebrated on 14th November every year to commemorate the birth anniversary of Jawaharlal Nehru, who was also called Chacha Nehru, due to his love for children. The day highlights the significance of giving love, attention, and affection to children.

Question 2.
How do we celebrate Children’s Day?

Answer:
Every year on November 14th Children’s Day is celebrated in India in memory of Jawaharlal Nehru on his birth anniversary. Every school rejoices this day with many events like quizzes competition, debates, cultural shows like dance, music, and drama. Teachers plan and perform many cultural functions for the students. Chocolates and other sweet items are distributed in the classroom to children. Schools are embellished with frills, colored papers and good photographs to make the place look beautiful.

Question 3.
Why we celebrate Children’s Day in India?

Answer:
Children’s Day is celebrated every year on 14th November in India as a tribute to the nation’s first Prime Minister Pandit Jawaharlal Nehru. But after Nehru Ji’s death in 1964, it was unanimously chosen to celebrate his anniversary as ‘Bal Diwas’ in India as a sign for his love and affection towards children.

Question 4.
What is the history behind Children’s Day?

Answer:
Jawaharlal Nehru was very affectionate to children and he strongly thought that children are the future of the country. He once said “The children of today will make the India of tomorrow. The way we bring them up will determine the future of the country.” The idea of celebrating children’s day came up after Nehru’s death in 1964. Hence, every year on his birth anniversary we celebrate Children’s Day on 14th November.