Caste System India Essay: India is one of the richest and oldest civilizations in the world. India is a country with a vast diversity of people living in it. The caste system in India is prevalent since ancient times. It is a social evil but still holds a prominent place in Indian culture. There is mention of the caste system in scriptures as well. It is based on tribe, religion, caste, and creed of people. Although, the concept has changed a lot still path is long.

Given below is a long essay composed of about 500 words and a short composition comprising 100-150 words on the caste system in English.

According to Rig Veda, the human was formed by, “Purush” by destroying himself. The head was made Brahmans, hands were transformed to Kshatriyas, Vaishyas from thighs, and Shudras from feet. But apart from these four there was one more caste. The brief about them is as follows:

The caste system had a lot of negative impacts. It deprived the citizens of their rights. It hindered their choice of job and education. There were cases of forced conversion of caste and even killings. It divided and distributed the harmony and unity of society. It leads to an inferiority complex among the people of the lower caste. It is a social evil that exploited growth. It has been a cause of constant distress in society.

Even after consistent efforts from the government and even citizens, there still is a caste system prevailing in Indian society. The effect is more visible in urban areas as compared to rural areas. The thing to understand here is, until the people understand that this caste system is beneficial for only a few opportunists but not for all, it is hard to end it. Once this is realized, it will welcome true freedom. 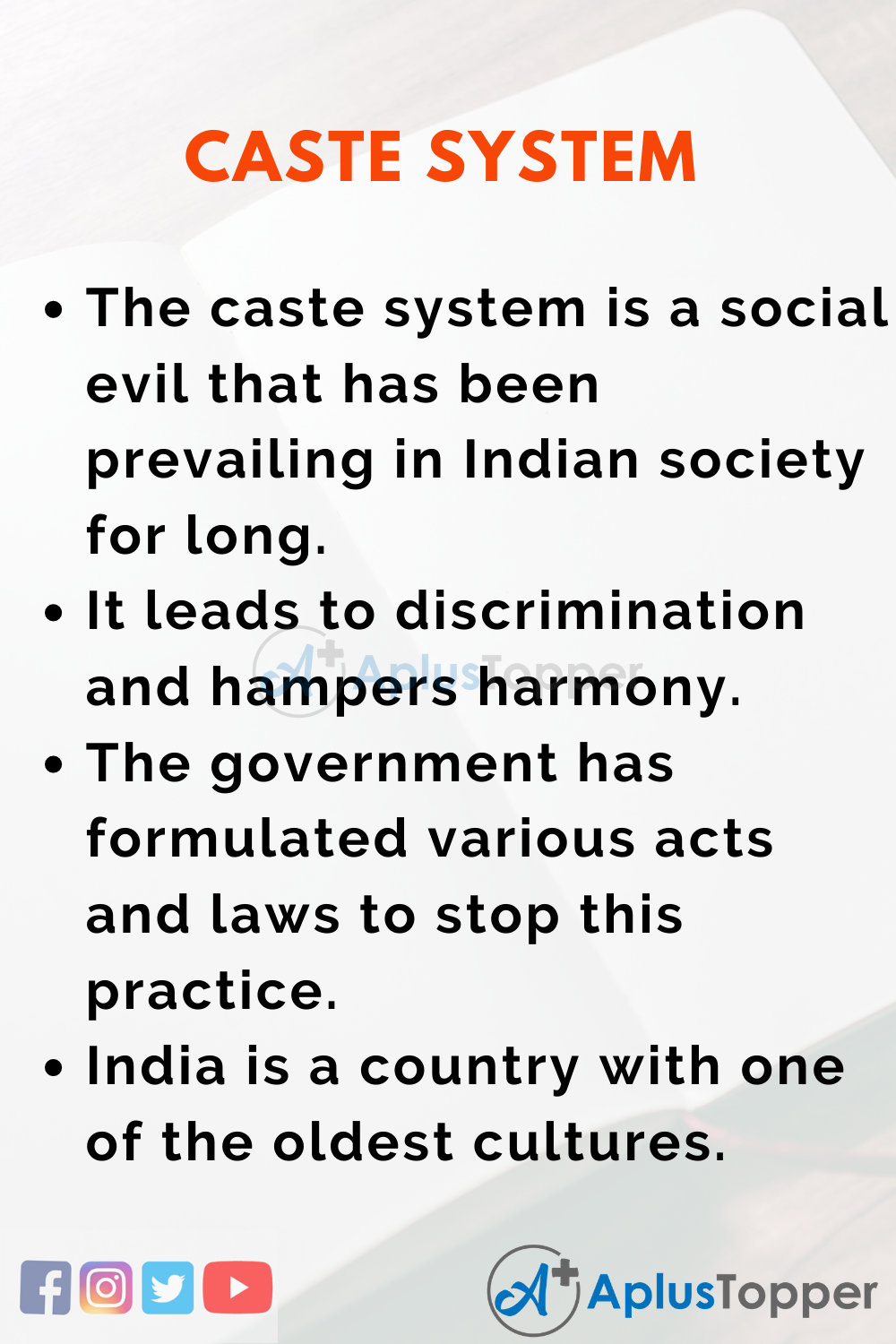 Short Essay on Caste System in India 500 Words in English

The caste system has many negative impacts on the growth of society. It stopped people from availing of their rights. It leads to widespread discrimination and the feeling of inferiority complex among people of the lower caste. They were even deprived of their basic rights of food, cloth, and even to follow a god. It infuses false pride in the people of the upper class as well. This leads to the growth of the silent feeling of hatred among the communities.

The government is trying hard by forming acts and laws to ban the caste system. With the advent of modernization and education, it has reduced. The caste system needs to be eliminated to enjoy equality and peace. The true fragrance of democracy can be experienced only when there is equality and no discrimination. Question 1.
What is caste system?

Answer:
The caste system in India is prevailing since ancient times. It is the classification of the people based on the jobs performed by them.

Question 2.
What are the different castes under the caste system?

Answer:
There are mainly four castes under the caste system. Additionally, one more caste was added. They are:

Question 3.
Discuss any one problem of the caste system.

Answer:
The most common problem of the caste system is inequality. It leads to a feeling of hatred among different communities.

Answer:
The caste system is a social evil that has negatively impacted society. To enjoy the true benefit of democracy, the caste system needs to be abolished from society.