Article on Child Labour: Child Labour occurs when children are forced to take up work at an age they need to study and enjoy the phase of innocence. Child Labour leads to the loss of childhood and escalates the exploitation of children in various forms.

India faces situations where children are forced to work under adverse conditions. Despite Laws against Child Labour, many children remain exploited as cheap Labour as the authorities are unable to implement strict laws and actions to protect children. Society and law-makers must eradicate child Labour in India. 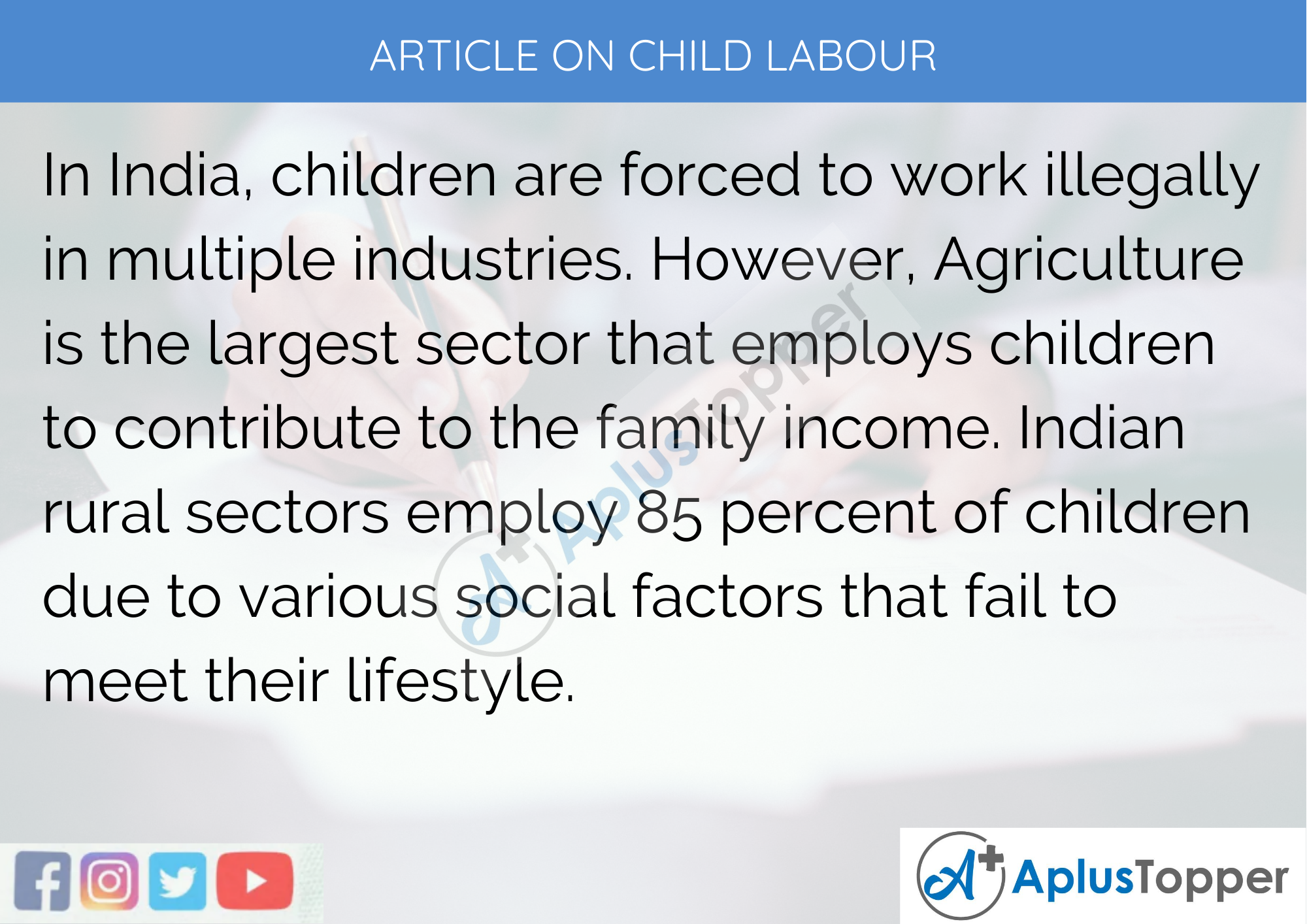 In India, children are forced to work illegally in multiple industries. However, Agriculture is the largest sector that employs children to contribute to the family income. Indian rural sectors employ 85 percent of children due to various social factors that fail to meet their lifestyle.

Despite constitutional provisions to abolish Child Labour, many children remain exploited under hazardous work conditions. Due to paid Labour, children abandon their studies to support their families. They are made to forego all the wonders of childhood by the ruthless world.

The leading causes of Child Labour in India are social inequality, lack of education, and poverty. According to UNICEF’s report, children from the impoverished and rural parts of the world have no available alternatives such as teachers and schools.

Other factors of child Labour include the size of the informal economy, the inability of most Indian industries to scale up, lack of modern technologies, and the structure and inflexibility of the Indian market.

Children are employed due to social obligation, or loans and debts made by the families. Usually, children are forced to employ their families in brick kilns, stone and quarries, and agricultural sectors.

The children of the migrant workers and those that belong to the marginalized sections and Dalits in the society are pledged to work in small production houses and factories in the urban areas. Child Labourers on the bond are usually subjected to physical, emotional, mental, and sexual abuse, even leading to death.

In Orissa, the people of the lower section of the society sell their daughters belonging to eight to 10 years of age, as maidservants to the clear their debts.

Lack of implementation of Laws

Various other Laws and the Indian Penal Code, such as The Factories Act,1948, The Mines Act,1952, the Juvenile Justice (Care and Protection) of Children Act-2000, and the Child Labour (Prohibition and Abolition) Act-1986 seek to prevent the practice of child Labour in India.

Unfortunately, these laws and regulations lack active and proper implementation and enforcement.

The 200 words short Article on child labour mentioned below is suitable for kids and children of classes 1,2,3,4,5 and 6. The article is written to guide the children with their school works-assignments and comprehension exercises.

Child Labour means that children or teens are forced to work like adults—child Labour rips children of their childhood and school—child Labour results in the physical, social, and moral harm to a child.

In India, the numbers of child Labourers go undetected. Many children are forced to work in unregulated conditions without adequate wages, food, or even rest. Many become victims of physical, sexual, and emotional abuse.

The widespread problem of Child Labour:

As per the 2011 census report, the total population of the age group between 5-14 years is 259.6 million in India. Almost 3.9 percent of the total child population that is 10.1 million children in the country work either as the primary worker or as a marginal worker.

Reports state that almost 40 percent of child Labour occurs in the field of precious stone cutting. Child Labour exists in industries such as zari and embroidery, mining, dhabas, restaurants, tea stalls, and even at homes as domestic Labour.

The civil authorities and organizations need to work in unison to free child Labour under extreme conditions. 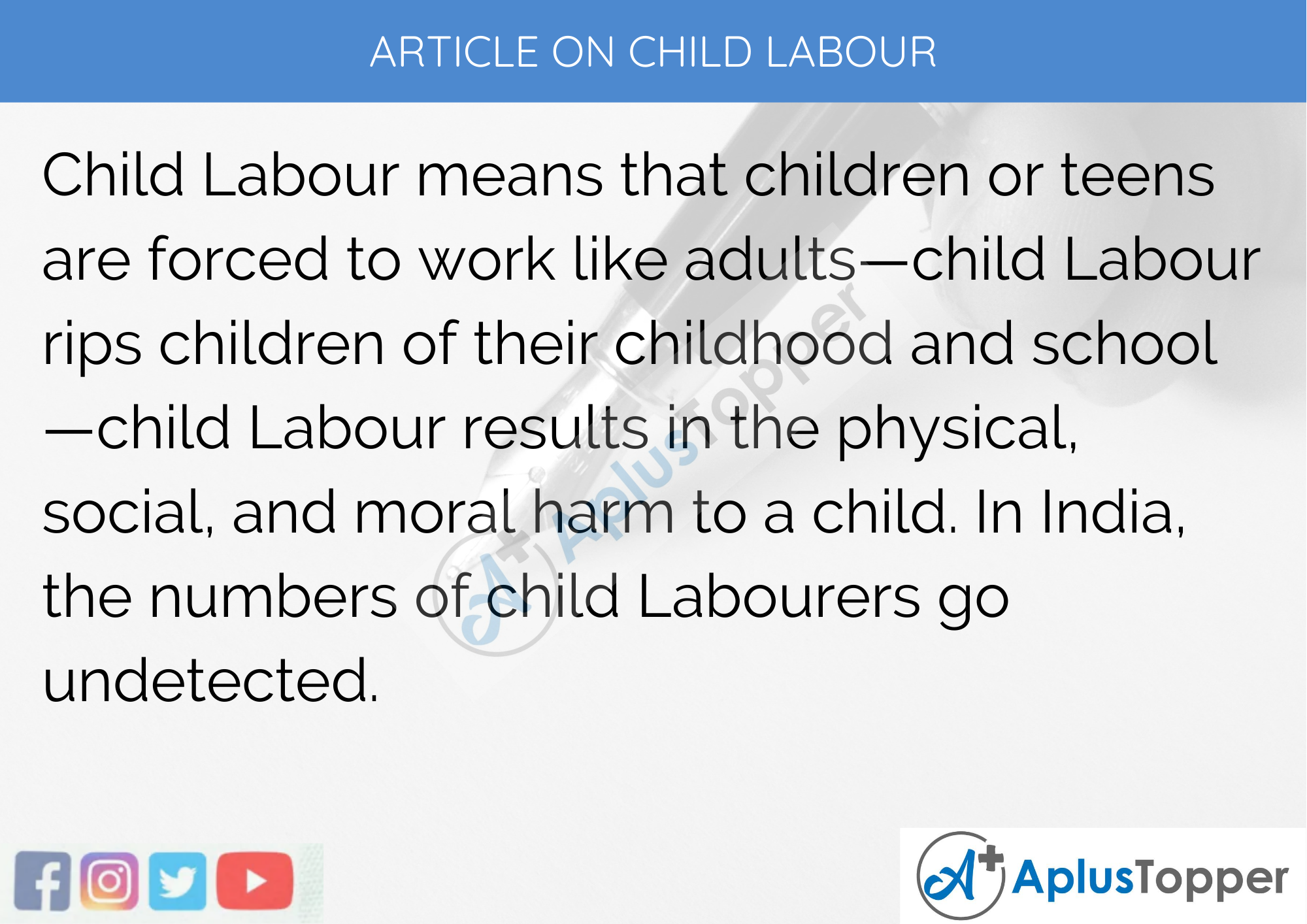 10 Lines About Article on Child Labour

FAQ’s on Article on Child Labour

Question 1.
What is Child Labour?

Answer:
Child Labour means that children or teens are forced to work like adults—child Labour rips children of their childhood and school.

Question 2.
Which Law is implemented by the Indian Government to stop Child Labour?

Answer:
The Child Labour (Prohibition and Regulation) Act, 1986, states that children’s employment in any work is a criminal offense.

Question 3.
What is the child Labour rate in India?

Answer:
According to the 2011 Census report of India, almost 10.1 million children between 5 years to 14 years are employed as Labourers.

Question 4.
What is the reason behind the prevalence of Child Labour in India?

Answer:
The leading cause of child Labour is extreme poverty in India. To supplement their parents’ income or being the only wage earners in the family, children end up as Labourers in various industries.