Article On Arrival of Mahatma Gandhi in India 1915: Gandhiji was a national treasure. He was revered by all country people equally. His participation in the freedom struggle by staying away from India profoundly influenced several other political leaders to follow in his footsteps.

When he arrived on 9th January 1915, there were tremendous celebrations in India. It was befitting welcome for a hero. Jahangir Petit welcomed him to his home, and a grand reception was held for that purpose. Gandhiji arrived in India, along with his wife, Kasturba Gandhi. After arriving in India, he was added to the “Kaiser-e-hind” list of honorable people. He was awarded a medal for his idea about peaceful protest. 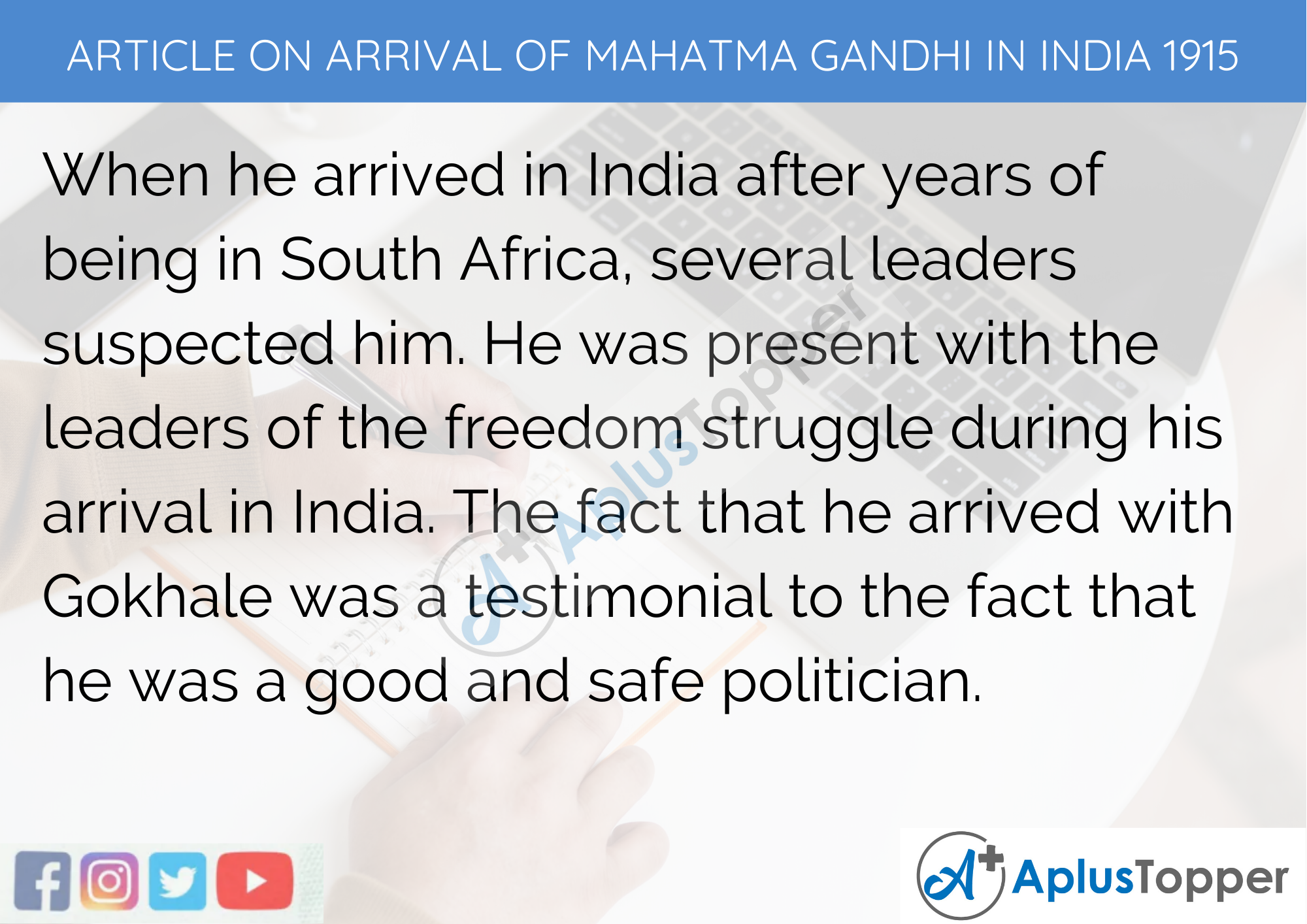 When he arrived in India after years of being in South Africa, several leaders suspected him. He was present with the leaders of the freedom struggle during his arrival in India.

The fact that he arrived with Gokhale was a testimonial to the fact that he was a good and safe politician. Gandhiji has enough expertise in matters of the state. He has already led several civil rights movements in South Africa, where he had to face tremendous discrimination because of his race and skin color.

This completely changed his perspective of the world after the discrimination and embracement faced by Gandhi due to his race and color, and he vowed to fight and cause a rebellion in the country against racial discrimination. Gandhiji came back to India to practice law.

However, he was not feeling at home in the country because it rejected his beliefs. He could not establish himself as a good lawyer. The system of justice was still pretty unknown to him. He tried to match up to the standard of legality in the country was after many attempts failed at it. This made him move to South Africa, where he pursued law and practiced law for the next ten years. He founded the Natal Indian Congress in the year 1894. He fought for several civil rights movements in South Africa too.

Gokhale was Gandhiji’s mentor. He assisted Gandhiji throughout his arrival in India and also beyond those initial days. The first step towards being a good political leader is to observe. Gokhale taught Gandhiji just that. He asked Gandhiji not to appear in any of the political gatherings that would take part in the following years. Gandhiji was to remain quiet. He was to be a silent spectator of all the havoc that was ensuing in the country. Poona (now Pune) was home to an essential organization during the freedom struggle.

Gandhiji wanted to be a part of this organization. It was called the Servants of India Society. However, the people who made up the society were skeptical about Gndhii’s methods. His peaceful ways of protest were highly uncalled for during such radical times.

As the organization dated over Gandhi’s admission into the society, Gandhiji visited his hometown. He went to Porbandar and spent a few weeks there. Then he traveled to Shantiniketan. There he met the Nobel Laureate Rabindranath Tagore.

From here, we can understand that Gandhiji was under no hurry to become a political leader. All he wanted to do for the first year of his arrival was enjoy the essence that India had to offer to him even during such torn times. He wanted to understand the Indian audience to a greater extent and work with them in the future.

Gandhiji arrived in India with great courage. However, there was a lot of skepticism regarding his methods. This made Gandhiji reluctant. He did not join the Servants of India Society. He nullified this application. During the trip that he took to Shantiniketan, Gandhiji was made aware of Gokhale’s sad demise. This left him heartbroken. To respect the wishes of his mentor, Gandhiji applied again to society but was rejected. He withdrew surge to be a part of the society and set on his own path of revolution.

During the year 1915, when Gandhiji was traveling across India and trying to assess the country’s landscape and political fervor, He did not try to meddle in the problems of the dominant political groups. He knew about his ways, and Gokhale had taught him well during that one year. The self-imposed silence helped Gandhiji much. He gained experience and patience during that year.

He was among the first Indians to use words like Swadeshi and Purna Swaraj. He continuously and throughout his life as a political leader, opposed casteism and differentiation. He did not believe in entitlement with regards to caste or higher strata in society. Not only did he begin the Quit India Movement but also the Satyagraha Movement. Gandhiji opposed the practice of untouchability, and he made it a point to abolish it.

Although Gandhiji was still uninformed and had very little knowledge about the political scenario prevailing in India, he tried to settle disputes. He began with settling a small fall out that happened between his relatives in the year. Not only did he settle the matter but also set up an Ashram in there, in the small village of Kochrab. The ashram was home to various people from all sections of society. They were busy with soul reviving activities all day round. 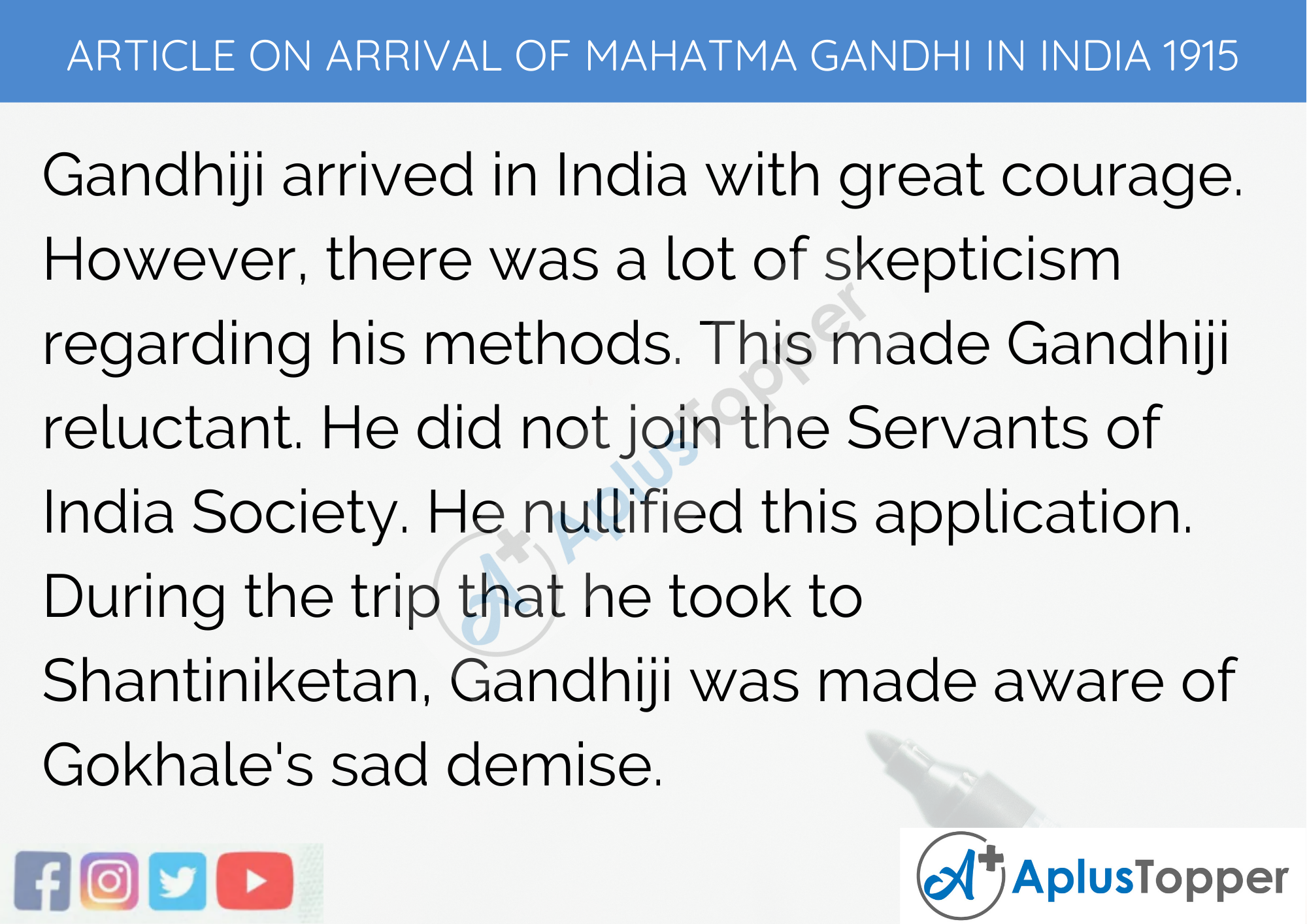 10 Lines On The Arrival Of Mahatma Gandhi In India 1915

Question 1.
What can be called Gandhiji’s accomplishments?

Answer:
Various social injustices were uprooted by Mahatma Gandhi. He was known to be the herald of the movement called Satyagraha. In this movement, Gandhiji made pure salt out of seawater and catered to the millions in the country who were being taxed for having salt. He also started Civil movements like the Civil Disobedience movement.

Question 2.
Where was Gandhiji before he arrived in India?

Answer:
He was living in South Africa with his wife, Kasturba Gandhi.

Question 3.
How was life in The Ashram?

Question 4.
When did Gandhiji arrive in the country?