Anti-Tobacco Slogans: The term tobacco can be defined as the common name of several plants in the Nicotiana genus and Solanaceae family. Also used as a general term for any product that is prepared from cured leaves of the tobacco plants.

Tobacco becomes highly addictive as it contains stimulants such as alkaloid nicotine as well as harmala alkaloids. More than seventy species of tobacco are known to the world, but the chief commercial crop is N. tabacum. Dried tobacco leaves are not only mainly used for smoking in cigarettes and cigars but also used in shishas and pipes.

Slogans on Anti-Tobacco in English

Slogans are one-liners intending to have a positive effect on its readers by providing them with valid information. Tobacco is intended to be used for recreational purpose, but due to the presence of addictive alkaloids, people get highly addicted to tobacco and its products.

Here we are providing fifteen anti-tobacco slogans to raise awareness among people about the adverse effects of the product and how it destroys people’s lives. These slogans are adequate in educating its readers on the topic. 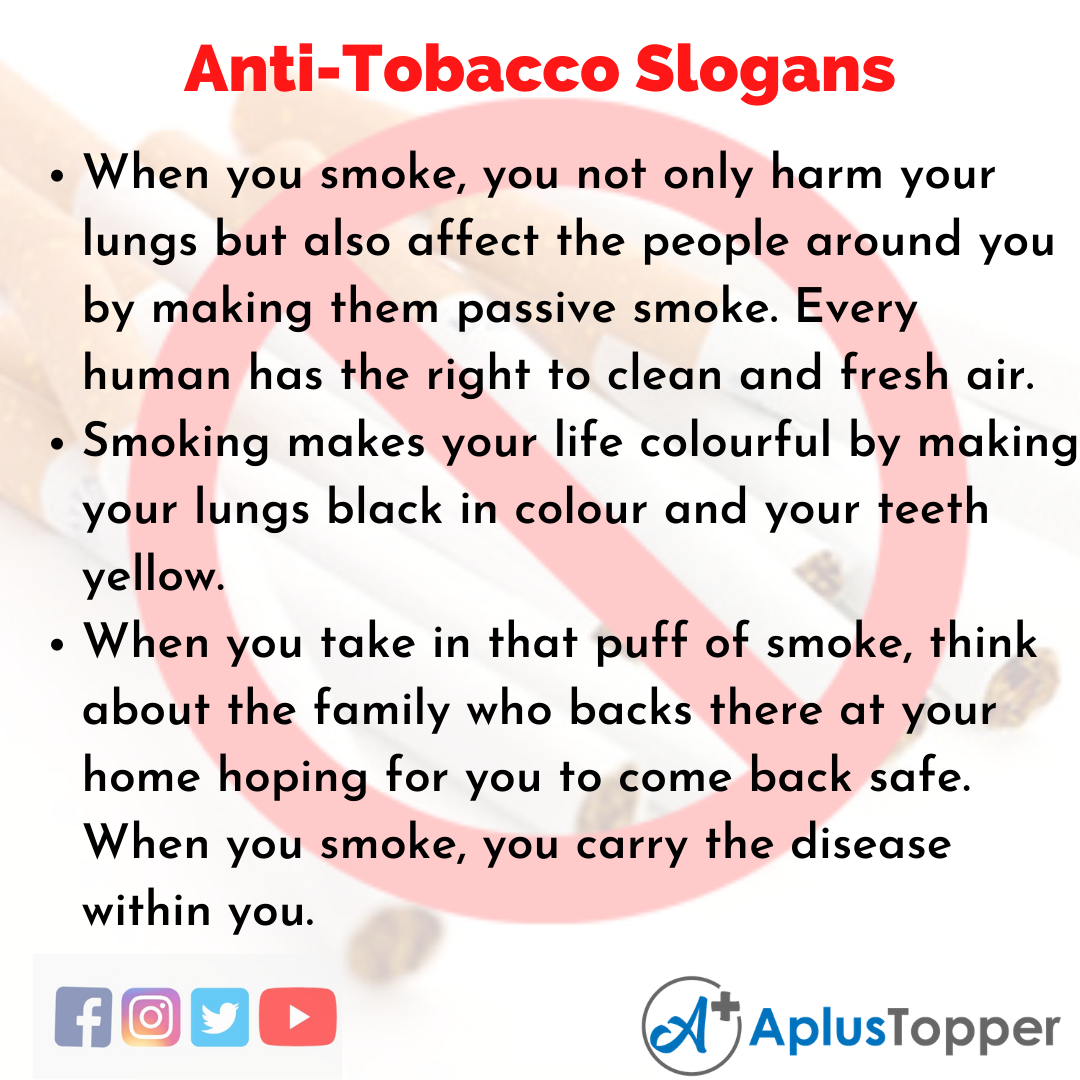 15 Unique and Catchy Slogans on Anti-Tobacco

1. When you smoke, you not only harm your lungs but also affect the people around you by making them passive smoke. Every human has the right to clean and fresh air.
2. Put out the ash in the trash. Say no to smoking today for a better tomorrow.
3. Smoking makes your life colourful by making your lungs black in colour and your teeth yellow.
4. When you take in that puff of smoke, think about the family who backs there at your home hoping for you to come back safe. When you smoke, you carry the disease within you.
5. Smoking is the legal crime that you are committing. Kill those bad habits; don’t give them a chance to kill you.
6. Each year numerous people all over the globe stop smoking, not by putting an end to the habit but by dying.
7. If you can’t stop smoking, your body will stop working.
8. Say yes to life and no to cigarettes. Become a fighter, put out the fire. That cigarette might calm your wounds temporarily but will harm you permanently.
9. The ash that you are smoking today won’t take long to turn you into smoke. Choose wisely, choose life.
10. Smoking is wrong and will turn your life into misery. Stop smoking cigarettes and start jogging instead.
11. Smoking is becoming friends with death.
12. Quit smoking and become the hero of your own life. Smoking is not cold. Instead, it makes you look like a fool.
13. You can’t have both choose either health or smoking. Be wise and when given a choice always choose health.
14. Smoking doesn’t give you a fairytale life. Instead is spoiled the life that you already have.
15. Your fitness is in your hands, save yourself from a painful and slow death. 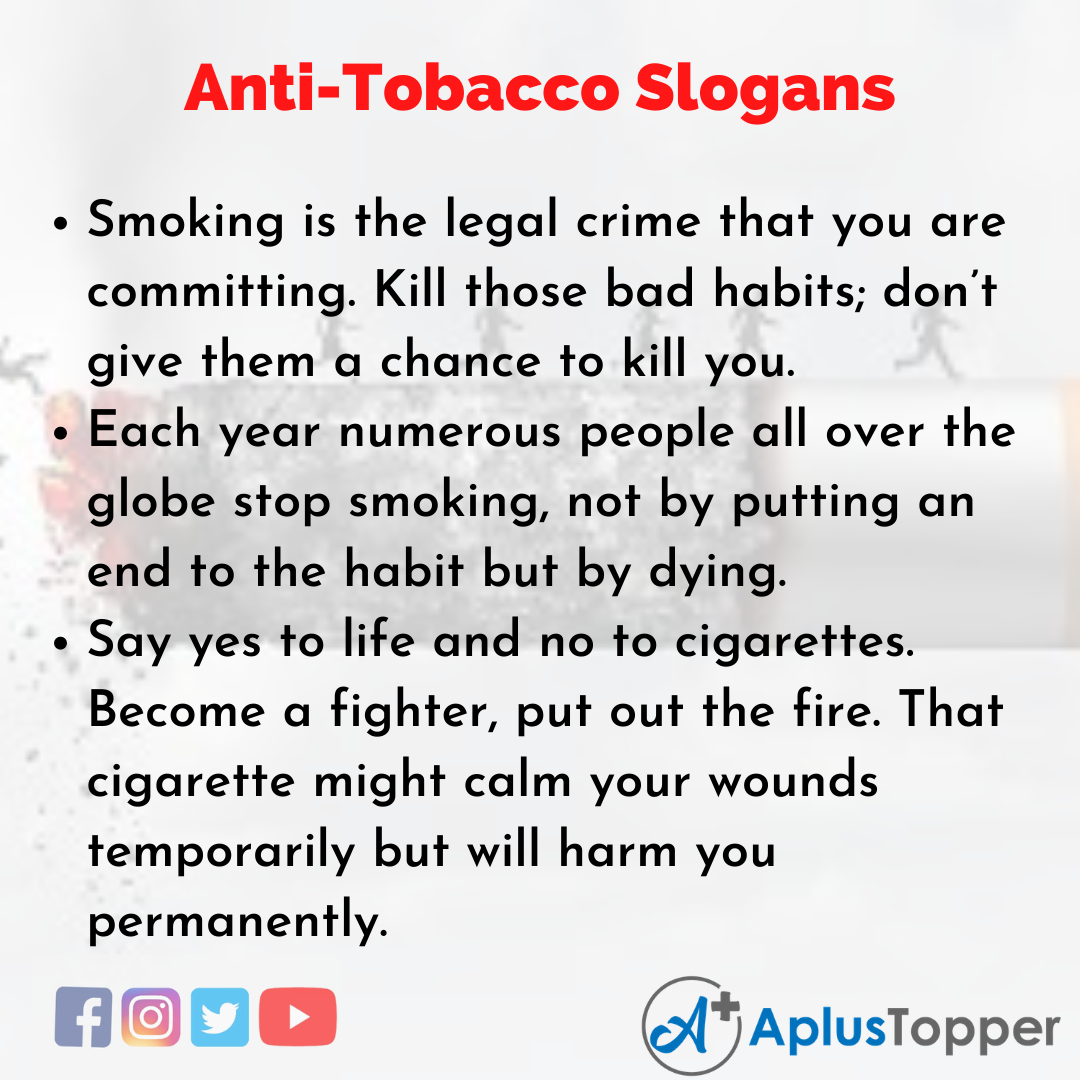 Question 1.
Does smoking have any benefits for health?

Answer:
Smoking does have several downsides which are very harmful to health. However, there are also some benefits that a person gets from smoking.

Question 2.
What are the harmful side effects of tobacco?

Answer:
When smoking becomes an addiction and people start doing it regularly in their lives, it has significant health hazards which are sometimes even fatal. Smoking causes cancer, heart diseases, diabetes, stroke, lung diseases and Chronic Obstructive Pulmonary Diseases (COPD) – including chronic bronchitis and emphysema.

Smoking also increases the risk for diseases like tuberculosis, certain eye diseases, and problems of the immune system – including rheumatoid arthritis.

Question 3.
How does tobacco kill?

Answer:
Smoking tobacco kills slowly, damaging the heart and the blood vessels, which in turn increase the risk of heart diseases and stroke. It is a significant reason for coronary heart diseases, which can potentially lead to a heart attack. Smoking lowers the ability to exercise, causing high blood pressure, and makes the blood more likely a clot.