Abortion Essay: Abortion is considered as one of the most controversial issues. It is an argument between life and death. The uncertainty of its complications makes the issue more challenging to deal with. Abortion refers to the termination of pregnancy by removing the fetus or the embryo from the uterus before it is ready to take birth.

Abortions are one of the most common methods to end a pregnancy. It is one of the safest procedures to terminate a pregnancy through medicine. An abortion that occurs without clinical intervention is known as miscarriage and occurs in almost 30% to 50% of pregnancies. Unsafe abortion can lead to maternal death; hence it is always safe to go for clinical procedures.

We are providing students with essay samples on a long essay of 500 words and a short essay of 150 words on the topic Abortion Essay for reference.

The term abortion is derived from the Latin word “abortio” which means to abort. It is the clinical process of removing the fetus or embryo from the uterus to end the pregnancy. It takes place in the first six months of pregnancy. There are two significant forms of abortion they are spontaneous abortion which refers to a miscarriage and the induced abortion, which is performed purposefully.

There have been laws that have allowed it as well as banned it during different periods. The medical abortions are carried out in two ways, which involve drugs and the second way is the surgical operation that involves an invasive procedure. It has been estimated that one out of three women are tending to undergo an abortion by the time they reach 45 years of age.

Some end up having multiple abortions. Significant numbers of abortions are due to unintended pregnancies and are used as a form of birth control. It has been calculated that 88.6% of abortions are done in the first trimester of pregnancy, 10.2% in the second trimester and 1.1% in the third trimester.

There are different positions based on the issue of abortion. The first extreme position belongs to the supporters who believe in preserving life and would ban abortion in all circumstances. They think that the government does not encourage the destruction of the embryo or the fetus.

On the other extreme are the advocates of free-choice, where they believe that it should be the mother who should have the absolute right to decide between keeping the baby or aborting it. All pregnant women have the right to request an abortion.

The intermediate position is held by those people who believe that abortion is permissible only in certain circumstances, like only when the pregnancy is dangerous for the mother who would result in maternal death or pregnancy caused by rape.

A vast controversy lies between the ideas of abortion and anti-abortion. It has also indulged political and religious views in it. People with different customs, beliefs, and cultures have their own ideas and own takes on abortion. Thoughts against abortions can lead to violent impacts and riots outside abortion clinics.

Abortion tends to discuss with one’s interaction where ethics, emotions, medical, and law comes into place together. The end of an embryo, before it can live in the outside world, the killing of human life is a contradiction to the norms of the society according to many.

You can now access more Essay Writing on Abortion and many more topics.

However, abortion is badly affecting our society today. People are killing their unborn child for no reason. Many think that abortion is the deliberate termination of human pregnancy. It is taking away life from something that deserves a chance to live. Most people have abortions because they are financially unstable or unwillingness to be a single mother or problems in relationships.

One should think twice before giving up their child because killing a fetus is taking away its chance to survive and causing the mother to undergo physical problems. Abortion is the expulsion of the embryo by which pregnancy is ended, and the chances of a fetus to take birth in the living world are taken away. Modern methods of abortion involve medication or surgery.

Mifepristone is a drug that appears to be safe and effective as surgery during the first and second trimester of pregnancy. Several birth control methods like the pills and the intrauterine devices are used to carry out abortions.

If the abortion is performed legally and safely on a woman who desires the abortion, then induced abortions do not increase the risk of long-term physical or mental problems in women. The World Health Organizations have recommended safe and legal abortions to be made available to all the women. Many support abortion, while some attach religious and politic views to it and create chaos out of the issue. It is the mother who should be given the sole authority to decide on abortion.

10 Lines on Abortion Essay in English

1. Around 58 million abortions are performed throughout the year in the entire world.
2. 45% of abortions are done unsafely.
3. Countries that allow abortions have different limits on the time of the abortion.
4. Abortion law permits prohibit, restricts or regulates the availability of abortion.
5. According to WHO the abortion rates are increasing worldwide due to increased rate of contraception.
6. The most common technique of surgical abortion is dilating the cervix and using a suction device.
7. Unsafe abortions with hazardous equipments lead to almost 47000 deaths every year with 5 million hospitalized.
8. Since 2018, 38% of women around the world have access to legal abortions.
9. In ancient times, abortions were performed using herbs and sharp tools.
10. Spontaneous miscarriage is the removal of the fetus before the 24th week of gestation. 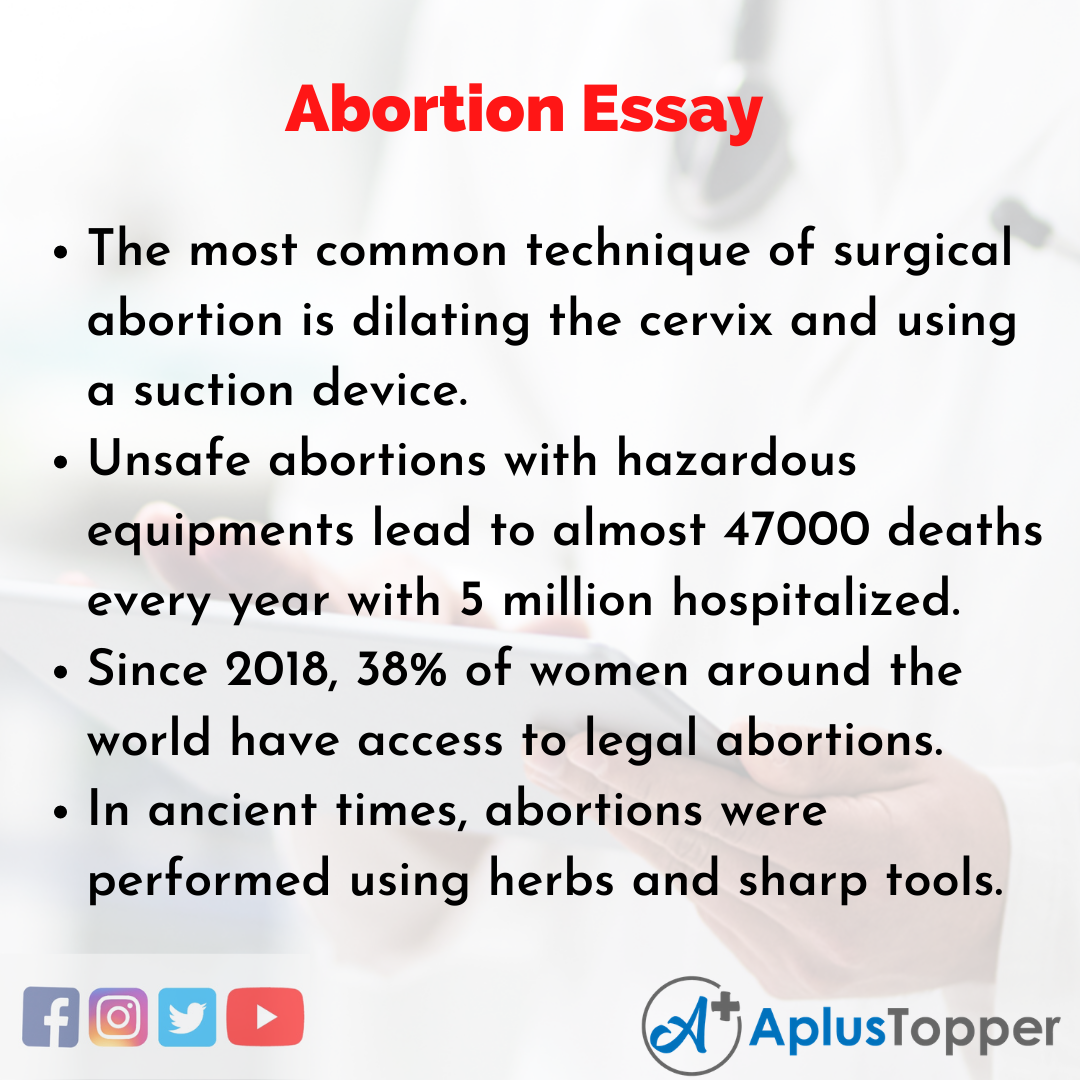 Answer:
Many describe the pain of abortion, similar to menstrual cramps. Many are back on their foot the very next day since every individual is different.

Answer:
Yes, it is safe, only if medicinal processes carry it out.

Question 3.
How confidential is the service of abortion?

Answer:
It is a very protected and confidential process keeping all the information safe and secure.

Question 4.
Are appointments required for abortion?

Answer:
Appointments are always recommended to undergo an organized procedure with maximum safety.