Youth Violence Essay: Youth Violence is escalating quickly and is becoming one of the major concerns all over the world nowadays. At home, outside, schoolyard, and everywhere in the community, frequent youth violence can be found.

One of the major questions that should arise in every individual’s mind is that what is the major cause that youth nowadays is becoming so violent and is there any way to stop this uprising trend. Youth violence should not be taken lightly as it is a very serious issue, and many aspects donate to youth violence such as negative media, domestic violence and gangs.

We are providing students with essay samples on a long essay of 500 words and a short essay of 150 words on the topic Youth Violence for reference.

Youth is something that should have no association with the term violence. Yet, in this era, youth violence is becoming very ordinary. The third leading cause of deaths in teens and children is youth violence.

Moreover, those individuals who have faced youth violence often face resulting in sensitive struggles. If a child or teen have faced violence before, or have bad grades or if they are under the influence of alcohol or drugs, they might have a risk of showing violence. ‘Violence’ is mostly seen as physical harm rather than the harm caused by words.

Many of the schools have yet to take any actions against the growing epidemic of violence in youths. Due to negative home lives, negativity in school and also due to violent video games teen bullying in school is increasing day by day and as a result teen suicide is also increasing. The strongest or meanest youth in the school is the most influential according to the youths due to which they are afraid to cross path with that particular student.

If preventive measures against these sorts of violence are not established in schools as soon as possible youths learn that acting negatively will give them positive outcomes and more cases of youth violence will start to take place. Nowadays, youth are constantly surrounded by acts of violence in movies and series, which generates two common effects in them, which are imitation and fear.

You can now access Essay Writing on this topic and many more topics.

Psychological experts believe that children are acting out what they see, which is due to the constant exposure of violent acts from their primary role models, video games. Unless parents and teachers take both responsibility and time to teach youths respectful values, they will only learn coping skills, problem-solving and conflicting resolutions from video role models.

Another major problem due to which youth violence arises is gangs as many youths are parts gangs which comes with bad influences. The teens want others to see them as someone to be feared due to which they join a gang. To join a cool gang, they either have fought and are always prepared to do things which are very dangerous for them without even thinking about the results. Some teens seek comfort, thinking they are alone in this world except for the gang members.

The list of contributing factors for youth violence keeps going on and is never-ending. So the only thing any community can do to prevent youth violence is enlarged, not just one individual, but the whole society has to shoulder the responsibility together. The society can limit the video games and games that have many violent scenes and parents should always have a lookout for their kids so that they do not depend on such violent method to cope up with any situation. There should be more awareness programs broadcasted on television that can teach children and teens the hazards of violence and can gain their attention without the requirement of violence and other objectional materials. 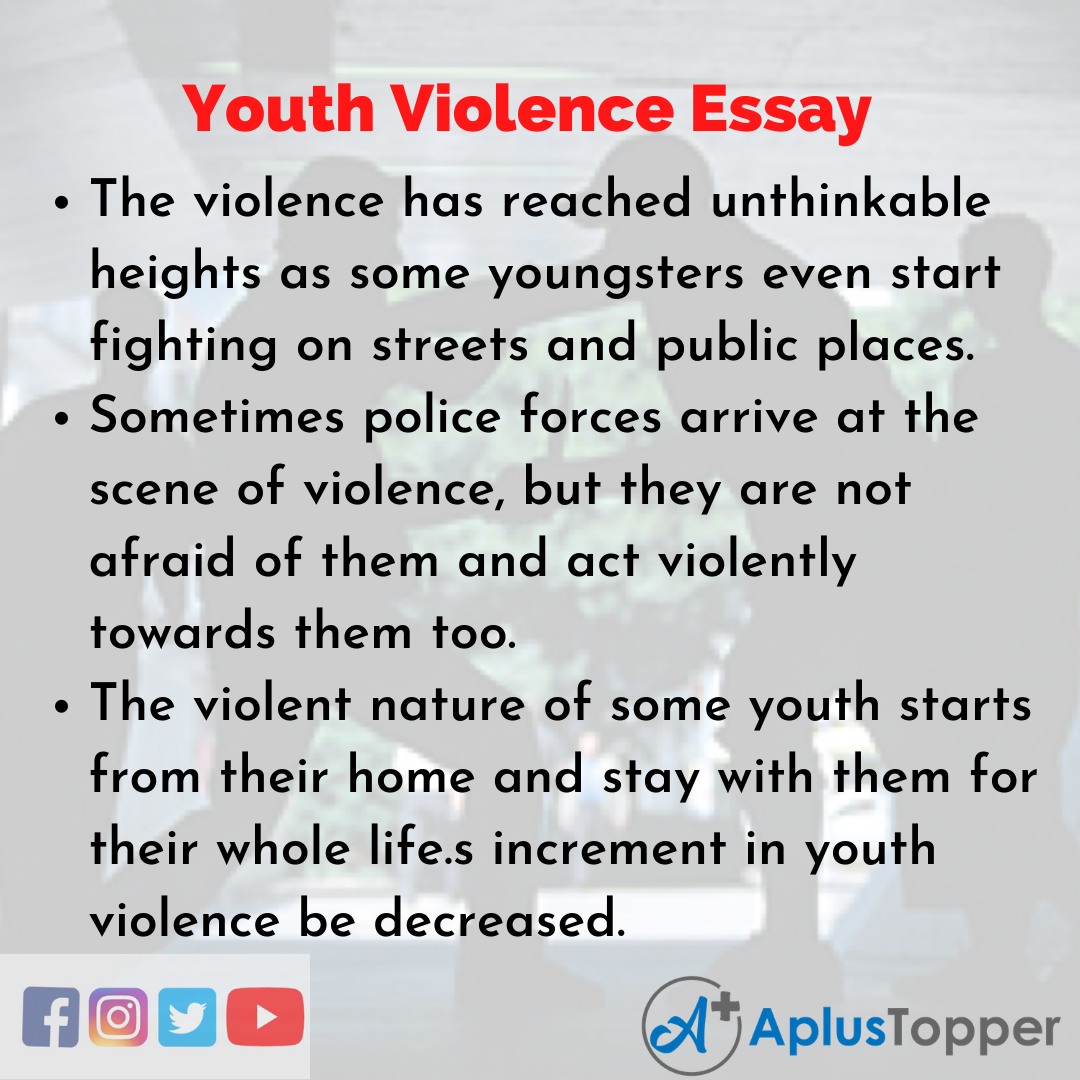 If a youth, including child or teen, grows up with an unhealthy family, he or she may grow into a violent person. Many children watch their parents being violent in their own home due to which their young minds learn to imitate it and do the same to those who are weaker than them.

Families should keep their children away from such an unhealthy environment and teach them about how to behave and love other individuals. Suppose the youths don’t learn these lessons from their parents.

In that case, they will never understand the value of a healthy environment, and they will think that all relationships are always full of violence due to which they also will try to communicate with people violently which will lead up to crimes.

1. A matter of concern for this generation and worries for parents and government is the growth of youth violence.
2. Youth violence has increased so much that nowadays, youths are ready to kill someone at the spur of the moment.
3. The reason for such impulsive killing can be either jealousy directed towards someone or maybe hatred towards someone who spoke ill of them.
4. The youth violence is growing slowly and reaching to such levels where the youths don’t even blink and even attack their teachers.
5. The influencers for youth violence can be identified as violent movies and television series or in some cases, unhealthy home life.
6. The violence has reached unthinkable heights as some youngsters even start fighting on streets and public places.
7. Sometimes police forces arrive at the scene of violence, but they are not afraid of them and act violently towards them too.
8. The violent nature of some youth starts from their home and stay with them for their whole life.
9. Only by their parents and teachers guidance can this increment in youth violence be decreased.
10. Government laws, teenager awareness programs and psychological counselling should be introduced to prevent this type of violence in youths. 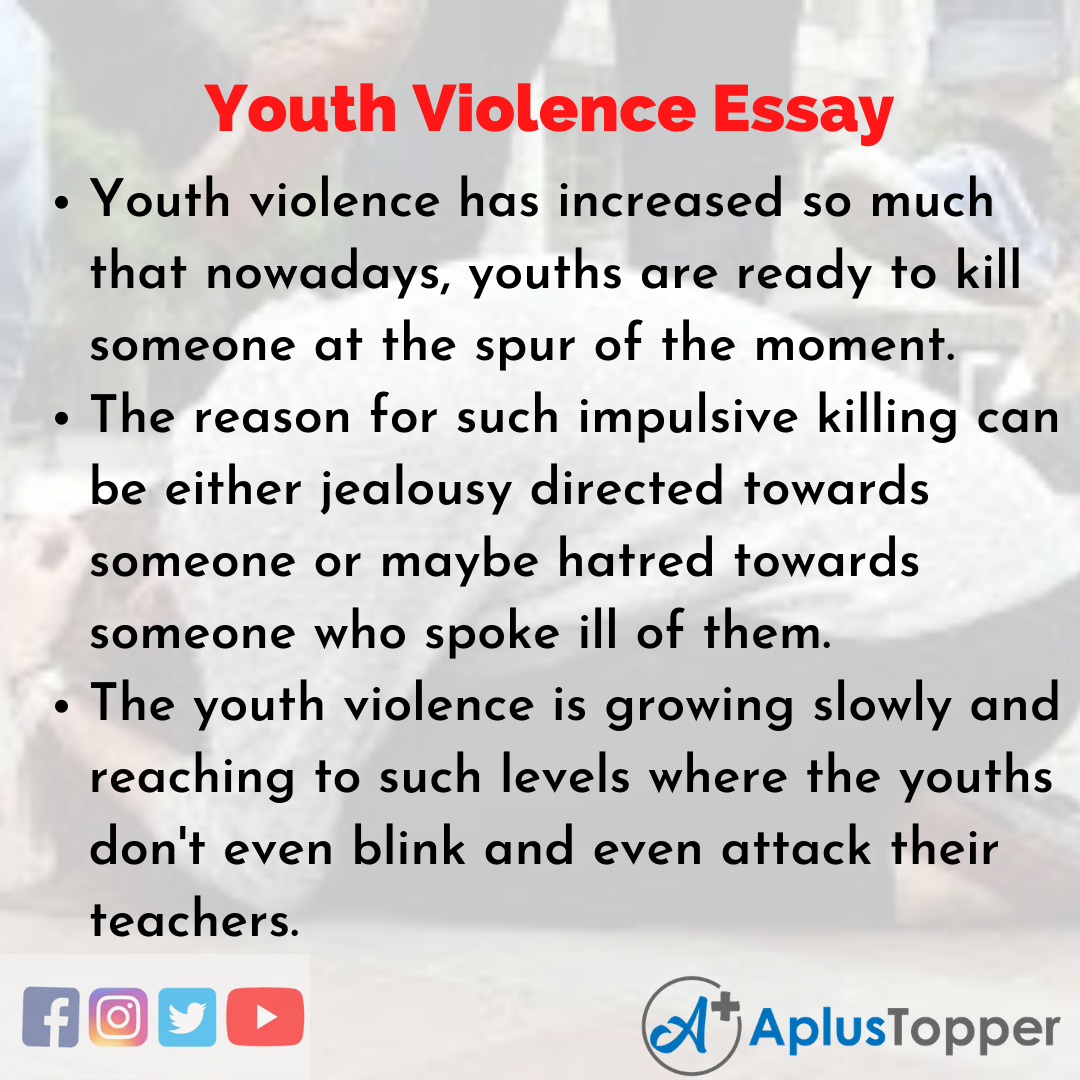 Question 1.
What are some examples of youth violence?

Question 2.
Can youth violence affect your life? How?

Answer:
The risk of mental and behavioural health difficulties which includes violent delegacy and victimization in future, substance use, depression, academic difficulties, smoking, dropping out of school, obesity, high-risk sexual behaviour and suicide.

Question 3.
What are the age group that is considered the most violent?

Answer:
Although most violent crimes are committed by adults aged 25 years and older, a huge population of young adults or youths ageing 18 to 24 years faces a higher risk of victimization or crime arrest.

Answer:
Any offence of weapon enabled crime or serious violence, where the victim’s age is 1-19 years including crimes like manslaughter, rape, wounding with the intent of serious bodily harm or murder is defined as Serious Youth Violence.