There are feminists worldwide who argue that men get more privileges than women. Today it is right to say that the gender roles have somewhat become equal than what it was in the past, yet there is still a long way to go.

We are providing students with samples of essay on an extended piece of 500 words and short writing of 150 words on the topic “Women’s Rights Essay” for reference.

Feminism is a movement that has always stood up for women’s rights. It recognises the idea that individuals are treated differently based on their biological identities, and they still exist a dominance of the male gender. No matter what the environment is, be it a school or work, women are treated in a subordinate manner.

Across time and culture, women rights movement have changed in form and perspective. Many argue for the notion that women’s rights are in the domain of workplace equality. Still, many say that even domestic equality is in the niche of women’s rights.

There are exceptional circumstances like in case of maternity leave that women require unique treatments. In the USA the concept of maternity leave came up long back, and nowadays the idea has reached to the developing countries. Women of many countries are subjected to social ills, but if there are special provisions for the safeguard of women, then there can be women equality ensured.

The history of women rights movements could be traced back to the 1700s and the 1800s. The first-ever convention to take place in favour of women’s rights was in Seneca Falls, situated in New York. Later, the marriage protest of 1855 by Lucy Stone and Henry Blackwell advocated the rights of women. They protested against the laws that bound women in their husband’s control and supported that women should have their own identity and should exist outside the control of their husbands.

The National Organization for Women or more commonly known as NOW was another step forward in women rights movements. It took place in 1966 and were entirely based on the idea of equality. This organisation wanted to provide equal opportunity to women so that as humans, their full potentials could develop.

In 1979, a United Nations Convention took place for discussing women’s rights. The main focus of this convention was to take suitable measures for removing all discrimination against women, which was a significant step forward in the women’s right movement. This convention made it clear that gender equality should exist in all sphere, no matter if it is economical, political, civil, social, or cultural. This convention looked forward to reducing all the prejudices against women, the abolition of sex trafficking or child marriages.

Ever since the historical times, women have actively participated in building the society. Several women took place in the first and the second world wars, and their works received not much recognition. The several waves of feminism that took place throughout the timeline reflected the contribution of women, and therefore we must realise their importance. We should build a society of equality and harmony where women are not in the suffering end. 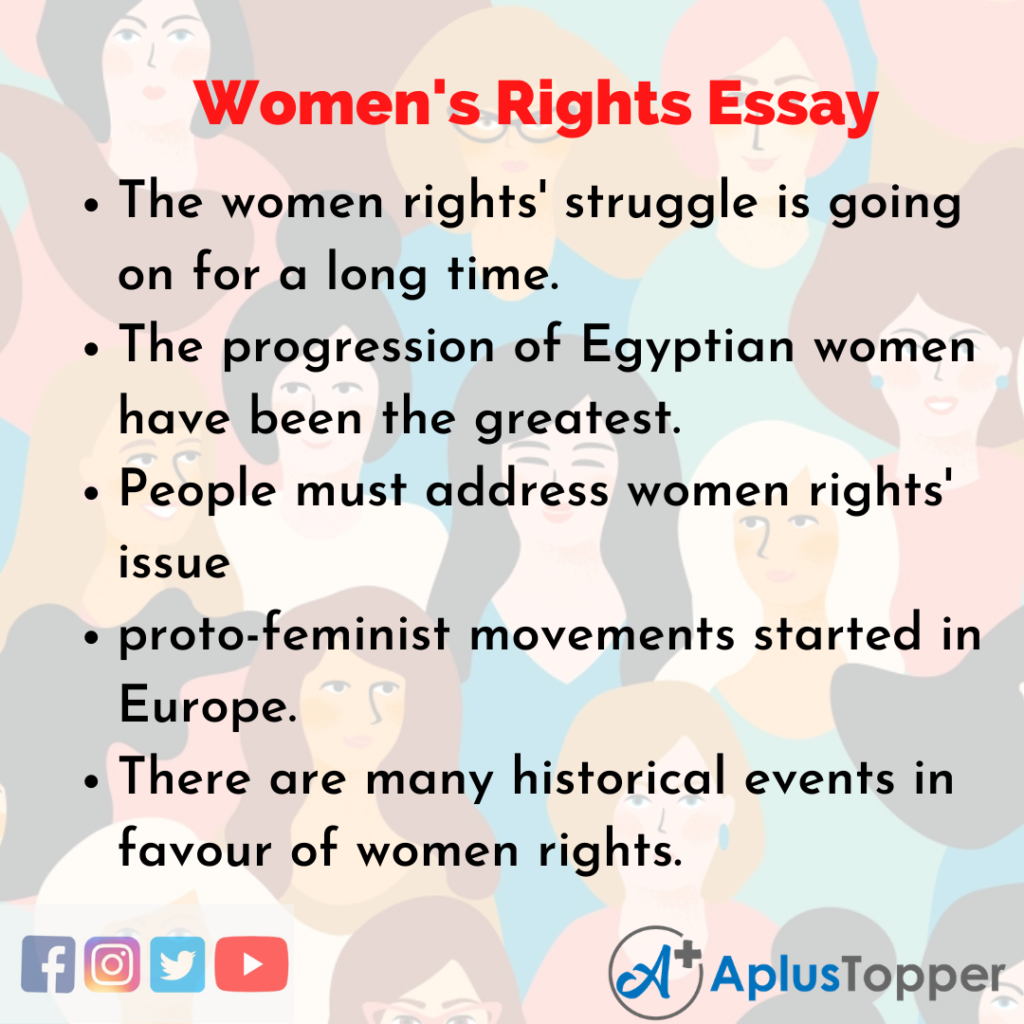 The issue of women rights is not something new and have been a source of constant struggle since time immemorial. The concepts of feminism, gender equality and women’s rights are intertwined, and one cannot address either topic disregarding another.

The first wave of feminism took place as early as the 1800s and raised numerous challenges that later contributed to the women rights movement. The first and second waves raised questions on racial discrimination and inequality in society. Other than the feminist movements, there have been numerous conventions and organisations that have taken up this issue on their hands. There are multiple well-known feminists, like Alice Walker, who have stated that social activism is a step forward in promoting women equality and feminist ideals.

Numerous pieces of evidence can prove in favour of the argument that women are the essential contributors in historical development. It is time to acknowledge such a contribution and change our goals to make a better society.

1. The women rights’ struggle is going on for a long time.
2. The progression of Egyptian women have been the greatest.
3. People must address women rights’ issue
4. proto-feminist movements started in Europe.
5. There are many historical events in favour of women rights.
6. Women took essential roles during the first world war.
7. The first feminist wave came in the late 1800s.
8. The 1960s saw the second feminist wave.
9. Women right movements led to social reconstruction.
10. Women rights issue can create chaos worldwide. 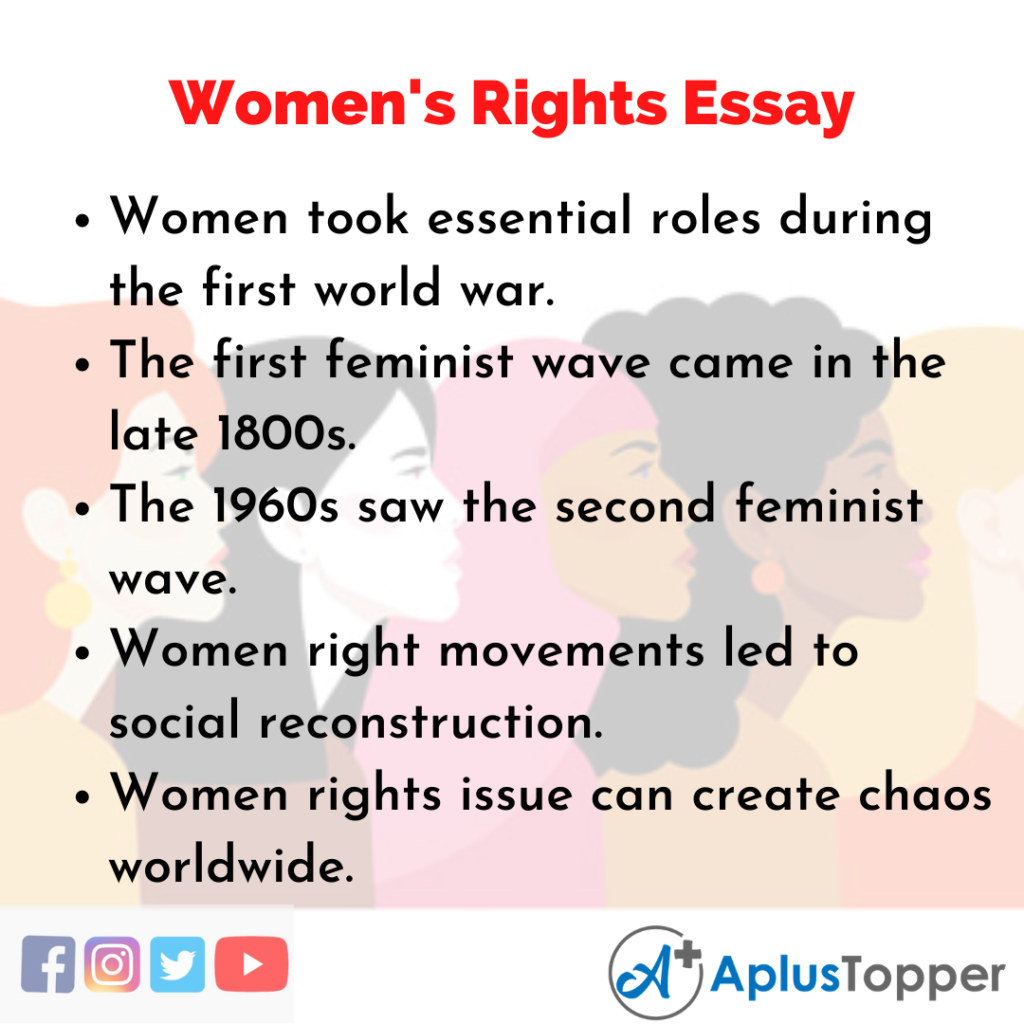 Question 1.
How can women achieve their rights?

Answer:
There are numerous ways to achieve this, the first and the essential being raising one’s voice against injustice. By sharing the workload, and by supporting each other, we can reach women rights too.

Question 2.
When did movements start for women rights?

Question 3.
What is the need for gender equality?

Answer:
We can achieve a peaceful and better society with gender equality, as well as full human potential and overall development.

Question 4.
Who are some eminent leaders of women rights?

Answer:
There is Thelma Bate, Eva Cox in Australia, Cai Chang in China, B. R. Ambedkar, Manasi Pradhan in India, Jane Addams, Antoinette Brown Blackwell, Lucy Stone in the USA. These are only a few names from the long list of eminent leaders.