Women in the Family Vocabulary: There are so many women members in a family. All of these women play an essential role in every family, and it is imperative to understand the relations they hold with you.

We have prepared a comprehensive list of women in the family vocabulary words for you.

It would be best if you learned these words because these words will help you to understand your relationship with the women members of the household.

List of Women In The Family Vocabulary words in English

Name of Women In The Family Vocabulary words

For the non-native speakers of English, they must build a compact vocabulary. This vocabulary will be incomplete if you do not understand the various women members in your family.

Important women members of the family range from your mother to your sister and many more. In this article, you might come across numerous terms which you might find new. 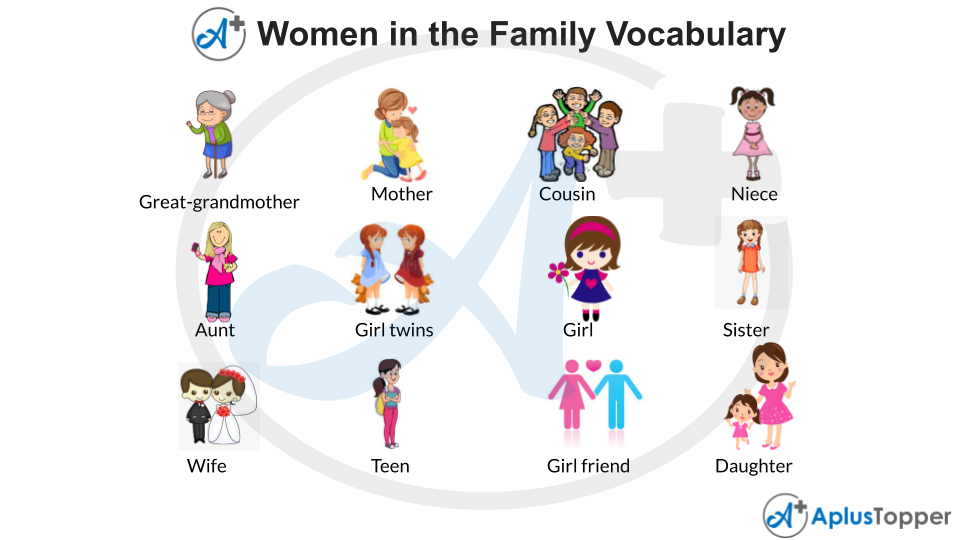 Description of the Women In The Family Vocabulary words.

There are various cultures where the cousins of your parents are also called aunts. In other languages, an aunt can be known as a Khaleh or Ammeh (in Persian) or Moster or Faster (in Swedish). Your aunt’s male counterpart will be your uncle.

A cousin in your family is those people who share one or more common ancestors with you. These shared ancestors must be two generations away, at the very least. These ancestors can be your grandparent or great-grandaunt and so on. You and your brother or sister will not be called cousins.

Your uncle or aunt’s child will be your first cousin. The granddaughter of your granduncle or grandaunt will be your second cousin, and so on. The first cousins in your family share a common grandparent and are two generations away from each other. Similarly, second cousins in a family will share a common great-grandparent and are three generations apart.

A daughter-in-law is a person who has come to the family after marriage to one’s son. There is a legal affinity of a daughter-in-law with the family, and they are related to the parents in a family through a marital union of their son.

For the daughter-in-law, the parents of her husband will be the father-in-law and mother-in-law. There are numerous duties and responsibilities of a daughter-in-law in the house as well as outside in the work field.

Foster parents are composed of a foster mother and foster father. A Foster mother is a woman who officially takes a child and welcomes the child into her family. This arrangement is done for a specified period of time and is not permanent.

A foster mother does not become the legal parent of the child she takes in. This child who is being taken care of is called her foster child. A foster mother will bring up the child of another woman as her own and will take all the responsibilities of the child. She takes place the role of a natural mother as (also an adoptive mother).

Godmother is a concept in Christianity specifically. When a female acts as a witness to the christening of another’s child, and also as the spiritual formation of the child all lifelong, then that female is the godmother of the child. Historically, this role always had some legal and religious obligations.

Godmothers are very fond of their godchildren, and it is usually the parents of the child who makes the choice of the individual for the godmother. Godmothers play an essential role in the upbringing of the child and act as the child’s mentor. They help in the kid’s personal development and is the legal guardian in case of any mishap of the child’s parents.

These terms are used very fondly and show the love and affection of a grandchild towards her grandmothers.

The male counterpart of your grandmother will be your grandfather. A grandmother plays a critical role in the family, as she showers all the love and affection and nurtures the entire family.

These children than have children of their own, and the grandparent then becomes a great-grandparent.

A mother is a women member of the family who is the female parent of a child. They are women who can inhabit or execute the role of having a relation to their offspring or children. This child or children may or may not be a mother’s biological offspring.

Blood relations do not solely determine motherhood, but any woman can be considered as a mother if she has given birth to a child or if she is raising a child or any children.

A niece in the family is the child of one of your siblings. She can also be a child of your sibling-in-law. If you have an auntie or an uncle, then you will be called their niece if you are a female. There are some cultures where the status of a niece is equal to that of a daughter in the family.

When any girl or a woman shares the same set of parents or at least one of the parents, then she will be called a sister. The male counterpart of a sister is called a brother. Sister is a term that often refers to a familial relationship. However, it can also refer to certain non-familial relationships too. A sister is usually considered to be a first-degree relationship.

If you have an elder sister, she might play the role of a second mother to you at times, and sisters are usually very protective about their siblings. A person can become your sister-in-law if she marries your brother, both elder and younger.

Within a marital relationship, the female is called the wife. Her male counterpart is called the husband. Even if the woman takes separation from her husband, she continues the status of a wife. In many customs, wives take the surname of the husband, and they are given the honorific title of ‘Mrs..’

The term wife defines a person in terms of her counterpart, and the law sanctions the union with her husband. The status of a wife ceases to be so in specific circumstances, like if the husband passes away or if the woman seeks divorce from her husband. In the case of annulment, the term wife is no longer used to denote the woman.