Water Scarcity Essay: Water scarcity is a fundamental issue faced by almost half of the population across the world. Like global warming and climate change, water scarcity affects human lives in different ways.

In some places, it disrupts smooth living. In other parts of the world, it makes the existence of human life difficult. At this point, it is beyond any argument that water is one of the essential requirements for humankind to survive on Earth. But, as it seems these days, probably humankind itself is responsible for its destruction. The scarcity of water across the globe cannot be wholly attributed to the rise in population. Irresponsible use of water is one of the significant reasons behind water scarcity.

We are providing students with essay samples on a long essay of 500 words and a short essay of 150 words on the topic Water Scarcity for reference.

The developed nations of the world lead the rest in terms of scientific discoveries. And even in those countries which are supposedly first-world nations, the water crisis is a terrible issue. In such countries, not everyone is equally affected by the scarcity of water.

Countries like Australia have two different segments of people living in their land. Some are abysmally poor and cannot afford the scarcity of water in their everyday life. On the other hand, some people are so rich that they seem to be undisturbed by the scarcity. This difference exists because the distribution of income in such high-income countries is skewed towards those who can earn more and spend more.

Since they earn about ten or fifteen times more than the average individual in their country, buying bottled water to drink at home is not much of an issue. For that matter, such people can even afford to buy water to fill their tanks and swimming pools when they are avoidable in times of a crisis. Because of such actions of people with a lot of money in their hands, water scarcity has become a glaring issue these days. The measures that Governments across countries are adopting often fall short of implementation tactics.

Measures like rainwater harvesting, reuse of water for domestic purposes, and creating financial schemes for saving water have to date been discussed and deliberated by various administrative bodies.

But the problem lies in implementation. Often it becomes difficult to put these things across the larger sections of society that are unaware of the dangers. It is not that such people do not face hardships because of the scarcity of water. Such people are myopic in terms of understanding how their hardships would increase in the days to come.

In countries like India, water has still not reached the stage of becoming a commercial commodity. It is mostly free, apart from the taxes that are levied on its distribution in different states. People in India do not have to buy drinking water. In such a scenario, most of them do not understand what water scarcity means.

Few realize the extent to which their irrational use of water can damage the existence of future generations. Since India is geographically surrounded by seas and an ocean on its three sides, much of the country has not suffered like those living elsewhere. The uninterrupted supply of water most of the time has been a boon and a bane. It is, however, not just the people of India who feel this way. Countries that are bordered by seas tend to be indifferent towards water scarcity as a global issue. 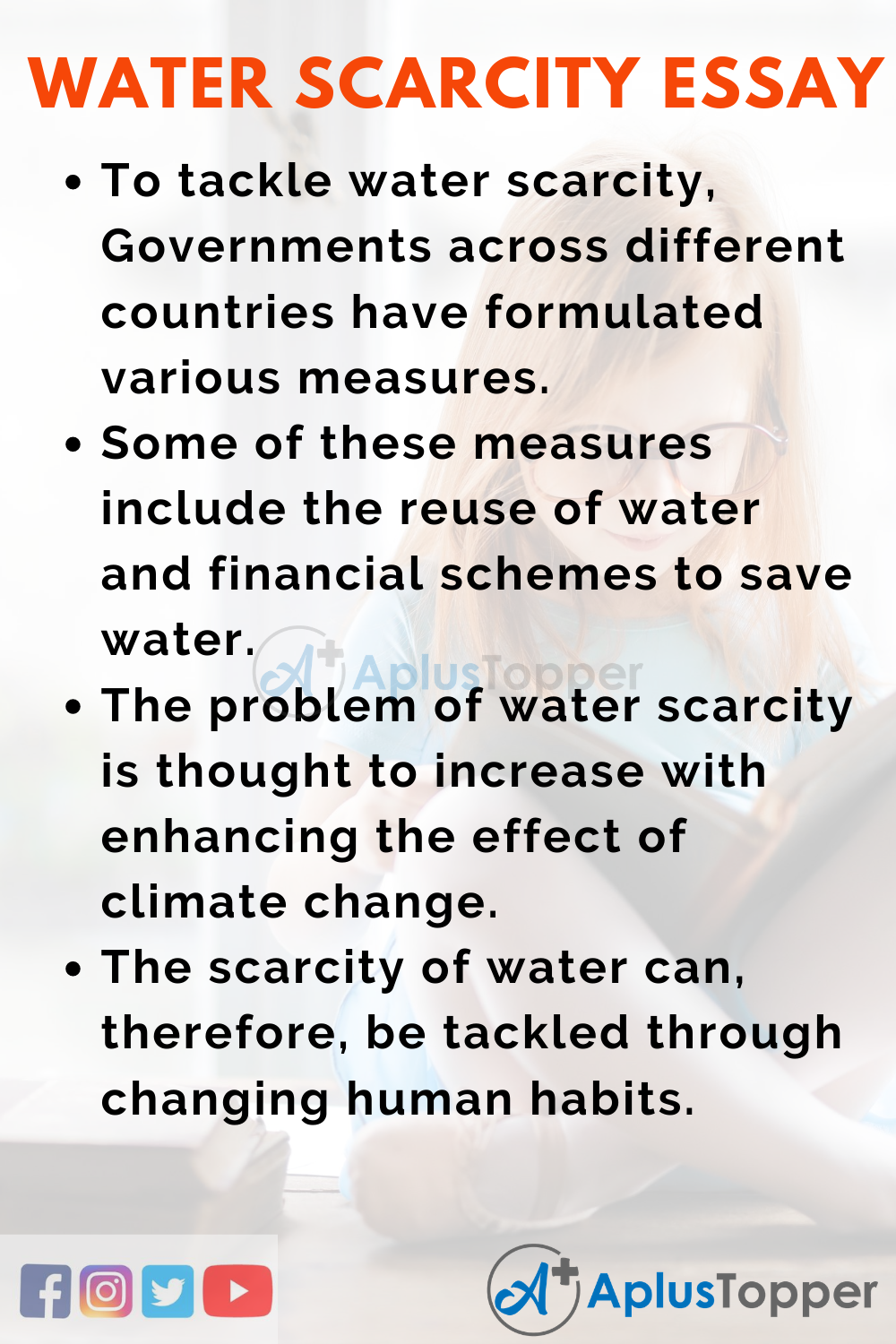 Water scarcity happens when people do not save water or even lack the willingness to save it. In some countries of the world, water is abundant. People in such countries do not reuse water. For instance, water which is used for washing cars can be used for gardening too. And the water which is used to clean floors can be put to use for other domestic purposes.

But in countries where water is abundant, people use fresh water for each activity. This leads to indiscriminate use of water. In countries where water is scarce, people save it in a lot of ways. Some Governments make use of financial incentives to save water. The scarcity of water affects people in a lot of ways. Some have to pay for water, while others have to bear the hardships of bringing them from nearby ponds and lakes. Often, there are cases of water poisoning. This happens mainly when people do not pay for water and tend to use it without filtration. 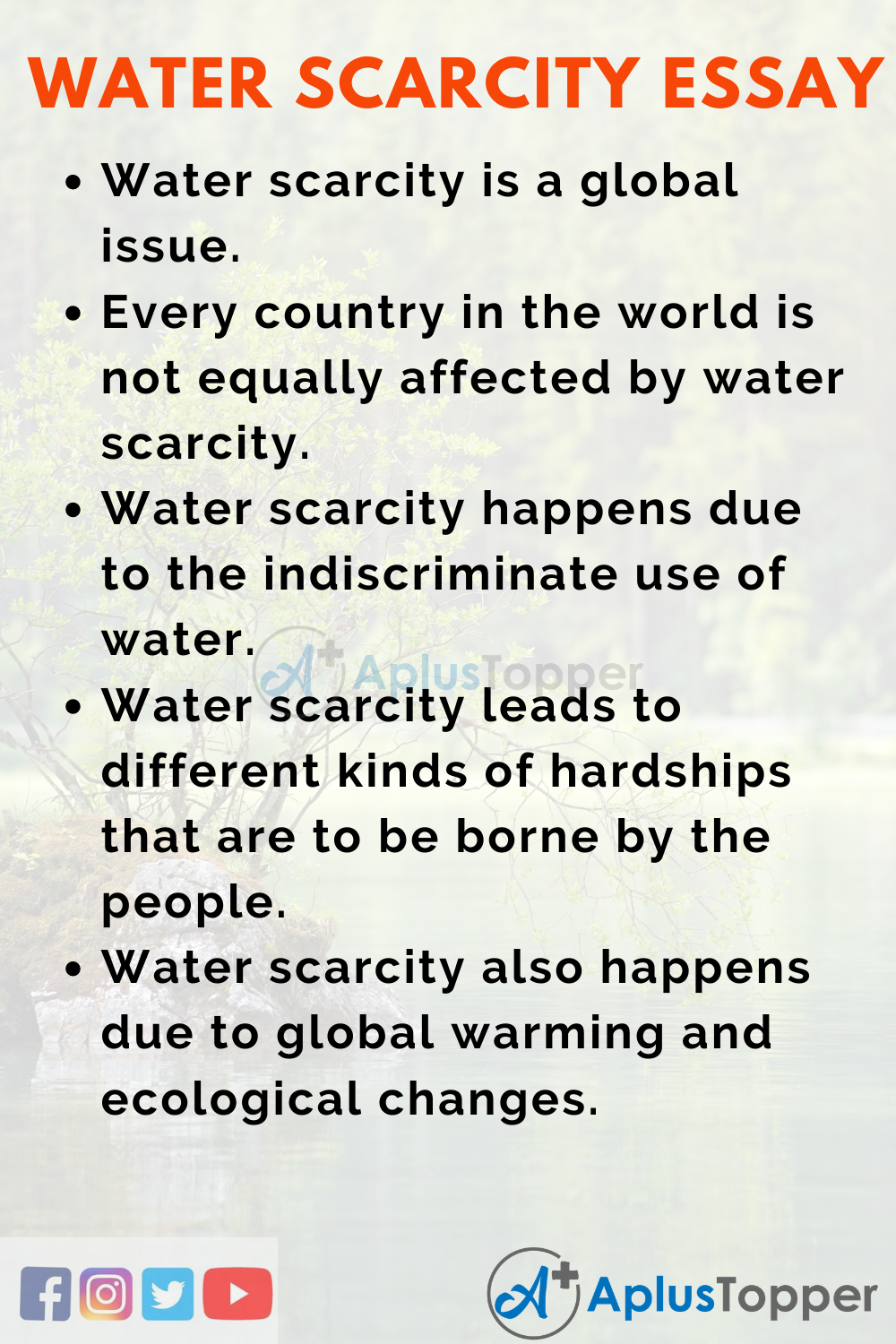 Question 1.
Why is water scarcity a glaring issue these days?

Answer:
Apart from global warming and climate change, water scarcity seems to be one of the primary reasons for the reduction of human efficiency, which affects a country’s economic growth. Hence, water scarcity is a glaring issue these days.

Question 2.
How can the problem of water scarcity be tackled?

Answer:
The problem of water scarcity can be tackled with efficient water-saving measures.

Question 3.
What are the countries which do not face water scarcity as such?

Answer:
Countries with an abundant supply of water from seas and oceans do not face water scarcity.

Answer:
Given the number of countries suffering from water scarcity, it is a global issue.