These online games can cause potential psychological damage to a growing child. Violence in video games may range from unknown people making hurtful comments to receiving death threats.

We provide children and students with essays and an extended essay of 500 words and short writing of 150 words on the topic “Violence In Video Games” for reference.

Long Essay on Violence in Video Games 500 Words in English

Video games are extremely addictive. Children and teenagers are drawn towards video games like a moth toward the flame. These games are exciting, thrilling, and adventurous. Each game takes the players through a vivid journey and gives them a false sense of achievement.

Online games and video games are a few of the many internet parts that psychologists and parents widely debate. These encourage violence, criminal activities, use of drugs, sexual activities, and can potentially impair cognitive growth, judgment and make its users violent.

Spending hours and hours in the thrilling fantasy world makes them socially withdrawn and promotes isolation. The decision making of the users is impaired due to extreme indulgence in such games. It makes them feel attracted to the fantasy world more than the real.

Many refuse to believe that playing violent games in front of a 19 inch TV can make them or their children or themselves violent. Video games are the source of adrenalin that makes them so desirable. They provide all the fictional pleasures unattainable in the real world.

Though people have not yet been able to prove with certainty that video games cause violent behavior in children, it might be proven soon. In the meantime, parents need to understand the symptoms of video game addiction and notice any changes in them, if any. It is crucial to remove them from these games if worse comes to worst.

The players themselves need to acknowledge the changes they see in themselves. Most of them remain in denial about the harmful effects it may have on them. They can be guided into the real world again with some counseling. Using violence to prohibit them from playing these games will make them hate their caregivers. Parents need to be careful about what content their children are exposed to online.

Many games have age restrictions. Parents should be cautious about their children maintaining the age limit. Such measures are not easy to implement if they are not habituated with the internet world, but it is a necessary step. Parents can also introduce children to physical games that are much more rewarding. Slowly and steadily, children will adapt to staying away from the digital world and become aware of what content they view with counseling. 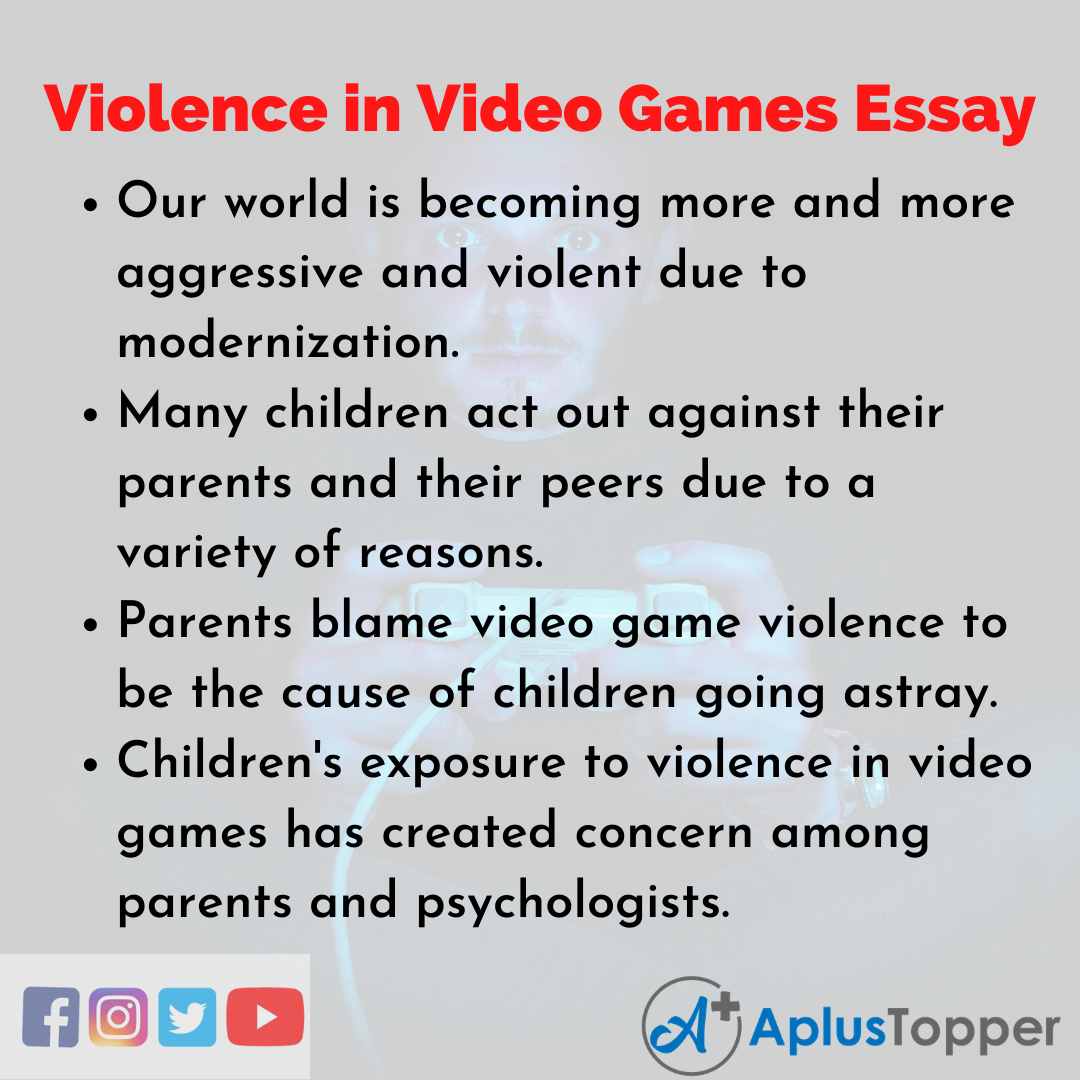 Short Essay on Violence in Video Games 150 Words in English

Video games are portals through which ordinary players are transformed into people of immense importance, such as a warrior, an assassin, a racer, etc. Video games require children to play in violent situations where they have to slaughter other players, shoot and kill them. Teenagers become reckless when they are addicted to playing video games.

They may act out against their parents, frequently use slangs they learned online, etc. These negative effects have given rise to a lot of controversies about video game violence.

Playing video games makes children socially withdrawn, isolated, and even temperamental. They become lazy and obese. It becomes difficult to monitor their activities. Playing video games for long hours every day can impair their cognitive judgment and make them apathetic to other people. Hence, parents need to monitor their children’s online activities and the video games they play. Many games have age restrictions, and the parents must maintain it not to be exposed to adult content.

10 Lines on Violence in Video Games in English 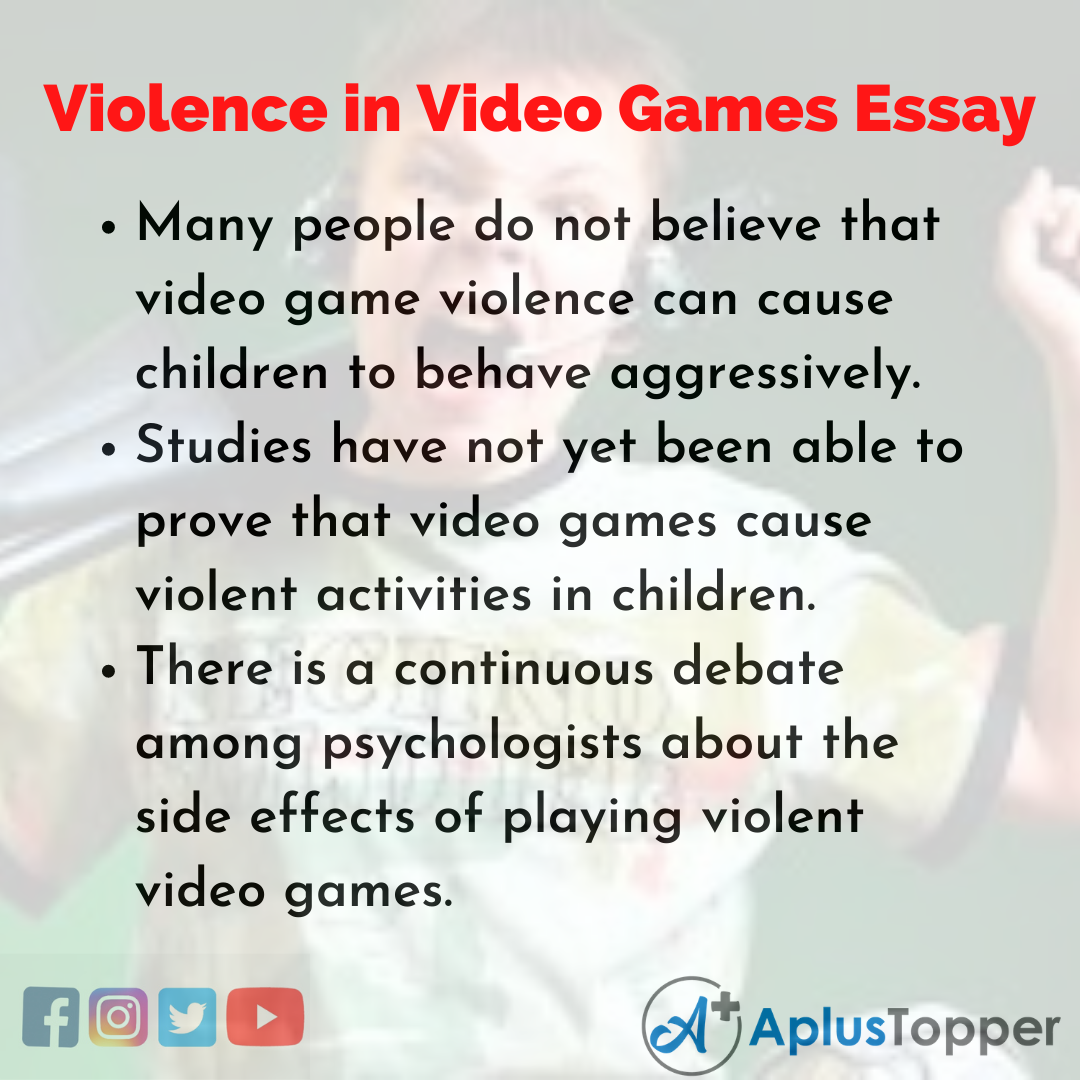 Answer:
Video games promote criminal activities like killing, shooting, drug use, use of slangs, etc. Hence, they can feel drawn towards such illegal activities in real life too.

Question 2.
What are the side effects of playing video games?

Answer:
Video games make children want to spend their day on the couch playing video games. They tend to get obese, socially awkward, and isolated.

Question 3.
How can parents monitor their child’s video gaming activity?

Answer:
Parents can check on their children from time to time. They can check the search history and take them for counseling if they are addicted to video games.