Violence Against Women in India Essay: Though comparatively much lesser than other countries, the amount of violence committed against women in India is still high. The force committed against women, mostly by men, takes various forms – sexual assault, molestation, marital abuse, or naturally, household abuse. Whatever be the shape and extent, it is a punishable crime. However, owing to the country’s crooked and lagging judiciary system, often, such crimes go unaddressed. The rates of violence against women keep on increasing.

In this segment, we have grouped essays on the topic of Violence against Women in India. It is a common topic for composition among school students, who can get it for their assignments and examinations.

Long Essay on Violence against Women 500 Words in English

The crimes against women in India take several forms. Mostly, these crimes result in lifelong trauma or death. Dowry deaths are one such example of a crime committed against Indian women. According to the age-old Indian tradition, the bride’s family is supposed to reward the groom with a considerable sum of money; this is the concept of dowry.

In rural areas, the bride, usually belonging to a poor household, is unable to meet the groom’s high demand for the dowry money. They fail to fulfill and pay the amount the groom asks for. In such cases, often, the bride falls victim to verbal and physical abuse of the groom. The woman is beaten, abused, and regularly molested, for her family’s incapability to fulfill the dowry. Dowry deaths are mostly seen in the rural parts of India and form an accountable part of the crimes committed against women.

Rapes and nonconsensual sexual activities form a large portion of the violence committed against Indian women. Statistics reveal that women are the most prone to rare in the Indian subcontinent; it is the most dangerous country as far as the number of rape cases is concerned. Rape is typically the sexual intercourse carried on with the woman without her consent. As of 2016, 10.9% of the crimes committed against women were for rape. It is indeed true that women are now becoming more aware and open about the topic of rape; they are opening up about their own stories of sexual assault etc. However, the numbers in India keep rising. The perpetrators often go unpunished.

Marital rape is yet another prominent example of violence against women. Marital rape is the nonconsensual sexual intercourse carried on between a married couple. Husbands often impose and force themselves upon their wives without their consent. This leads to a great deal of abuse and physical molestation committed upon the female body. Women trafficking and forced prostitution are two other kinds of violence to which Indian women victims. Other forms of violence committed against Indian women include child marriage, domestic abuse, sex trafficking, and abduction.

Men perpetrate nine out of every ten crimes committed against women; this proves how the origin of crimes against women stems from the deep-rooted patriarchal ideology in the minds of the Indian men. Their belief that the male is physically superior to the female leads them to force themselves on their female counterparts and inflict pain on the female community. As per the National Crime Records Bureau, 12.7% of the female population in West Bengal reported having been victims of violence, and 11.5% of the same in the state of Andhra Pradesh. 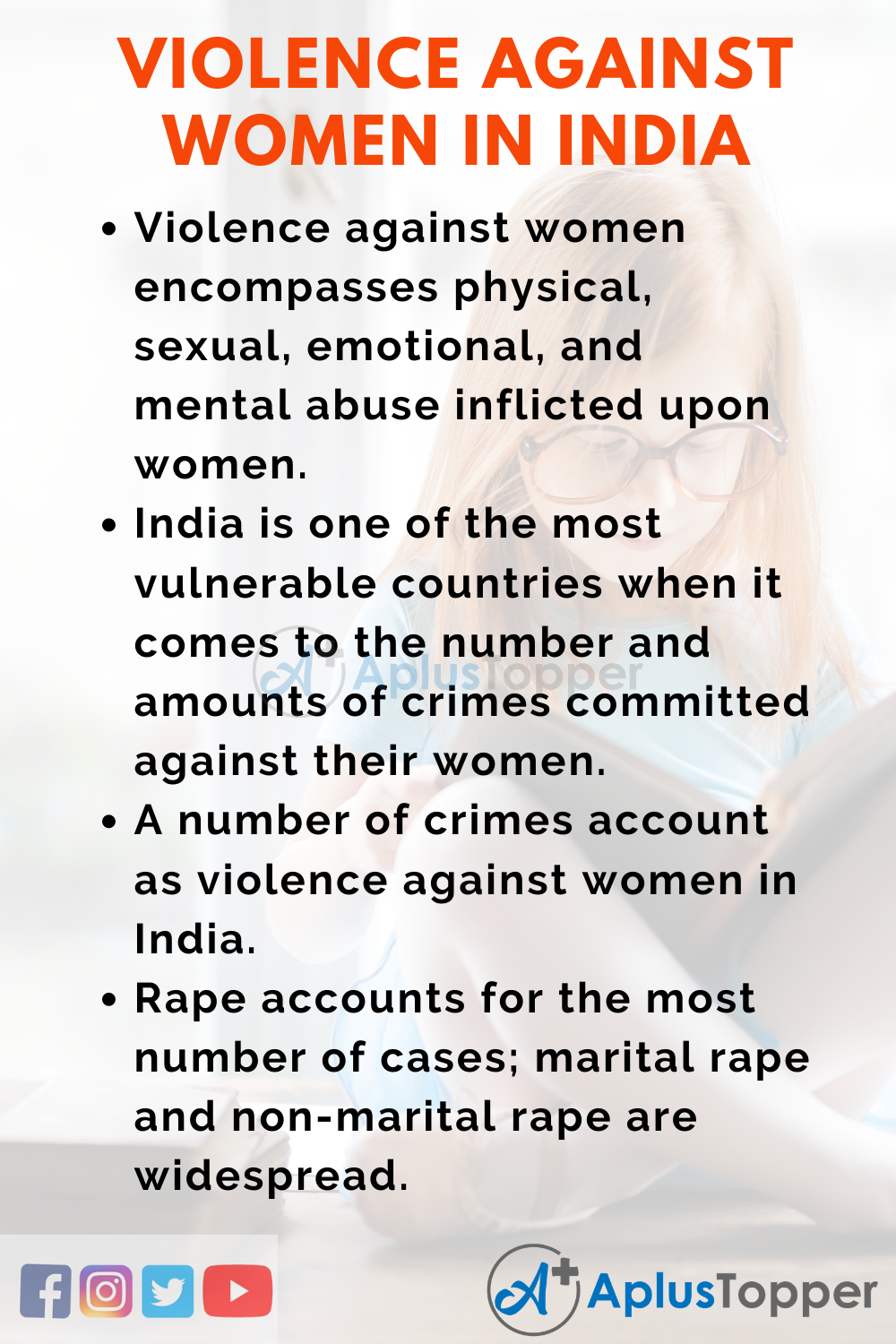 The matter of violence committed against women in India is massive and widespread. It requires more attention and adherence than what it already deserves. A decade back, the concern was discussed in elitist groups and beyond the ordinary people’s grasp. However, in recent years, the matter is being addressed more openly due to the advent of technology and widespread education. India is not safe at all for women. Delhi accounts for the highest number of cases of violence against women in India. Although policies and schemes are being carried out to mitigate the matter, the concern seems to grow and double itself with every passing year.

10 Lines on Violence against Women in India in English 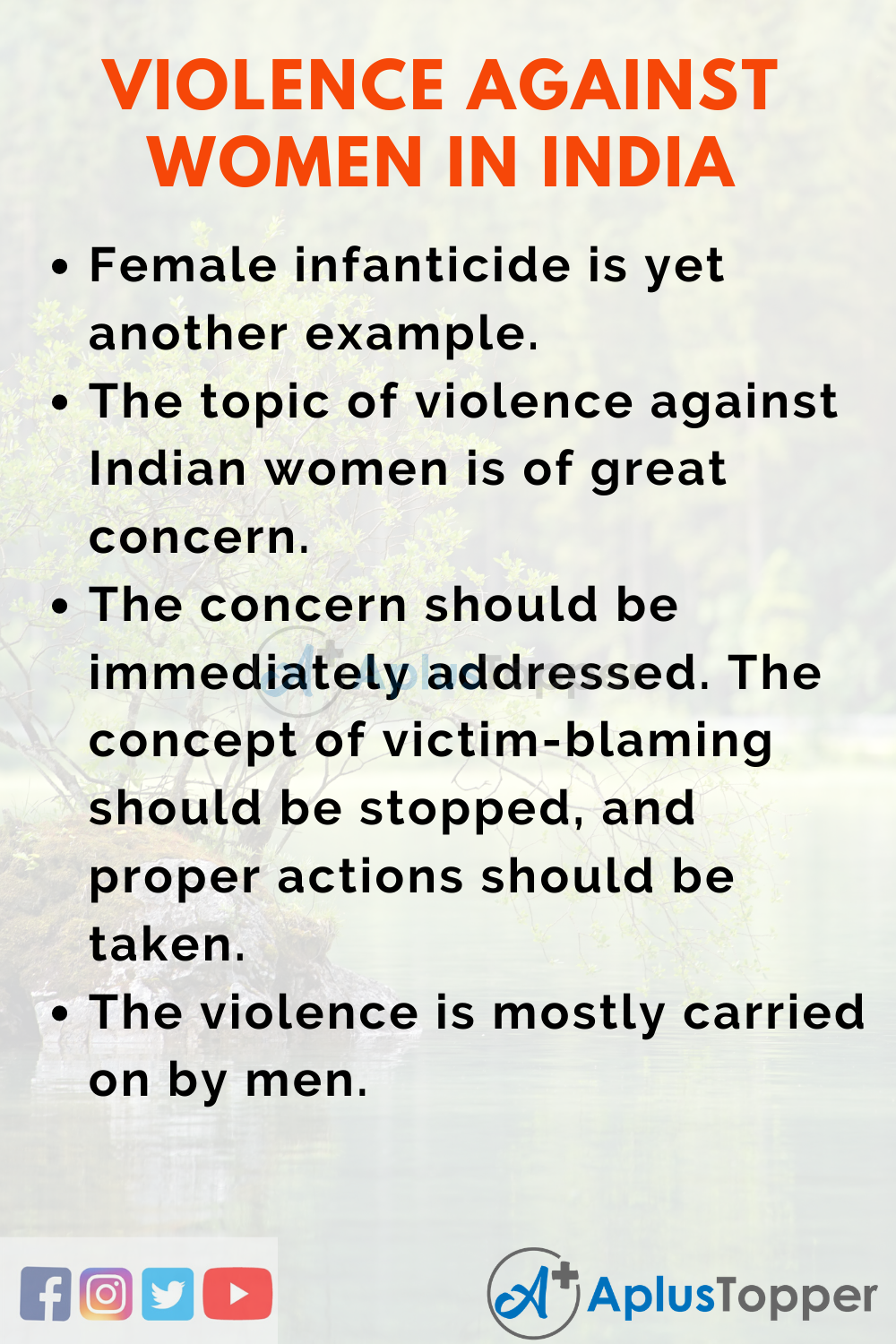 FAQ’s on Violence against Women in India Essay

Question 1.
Is domestic violence a form of crime against women?

Question 2.
Is India safe for women?

Answer:
It is hard to say. India has been identified as the most dangerous country in the world for women. Delhi is considered to be the least safe place for women to live in. Keeping these facts in mind, India is not much favorable for the female community.

Question 3.
What should be done to mitigate the crimes committed against women?

Answer:
Violence against women can be prevented via the strict implementation of the laws. The judicial system needs to become more active and effective in bringing justice to the sufferers and victims.