Vietnam War Essay: The Vietnam War is considered to be one of the most memorable and long-standing conflicts that involved the U.S., with a major role to play in it. The Vietnam War was primarily the consequences of the U.S. anti-communist foreign policy in the year 1960.

It was the military conflict between communist North Vietnam and their allies, against South Vietnam and other countries including America, Australia, Britain, France and New Zealand. Australia’s alliance with the USA was the main reason for the commencement of the Vietnam War. The USA had been a part of the war since 1959 and needed Australia’s assistance. It was a long, costly and divisive conflict. The conflict was intensified by the ongoing cold war between the United States and the Soviet Union.

We are providing essay samples to students on a long essay of 500 words and a short essay of 150 words on the topic Vietnam War Essay for reference.

The Vietnam War is also known as the Second Indo-China War and in Vietnam as the Resistance War Against America. It was the second of the Indo-China Wars that was fought between North Vietnam and South Vietnam. North Vietnam was supported by the Soviet Union, China and other communist allies.

On the other hand, South Vietnam was supported by the United States, South Korea, the Philippines, Australia, Thailand, and the other anti-communist allies were also there for support. The war lasted 19 years and was also called the Cold War by many. The war had direct U.S. involvement, and it ended in 1973.

During World War II, Japanese forces had invaded Vietnam. To fight it off, both Japanese occupiers and French Colonial administration, the political leader Ho Chi Minh formed the Viet Minh, being inspired by the Chinese and Soviet Communism. The Viet Minh was also known as the League for the Independence of Vietnam.

Following its 1945 defeat in World War II, Japan withdrew its forces from Vietnam leaving the French-educated Emperor, Bao Dai in total control. Seeing this opportunity to seize control, Ho’s Viet Minh forces immediately rose to take complete control over the Northern city of Hanoi and declaring it as the Democratic Republic of Vietnam with Ho as the president.

After Ho’s communist forces took control over the North, armed conflicts between the northern and the southern armies continued until a decisive victory of Viet Minh took place in the Battle of Dien Bien Phu in May 1954. The French loss at the battle and almost ended the French rule in Indo-China.

Vietnam was split along the latitude known as the 17th parallel based on a treaty signed in July in the year 1954, with Ho in control in the North and Bao in the South. The Vietnam War with active U.S. involvement in 1954 was due to the ongoing conflicts that dated back several decades.

You can now access more Essay Writing on Vietnam War and many more topics.

The Vietnam War led to outcomes like economic downturn and political isolation for Vietnam, which was only supported by the Soviet Union and its allies located in Eastern Europe. It also led to the fall of the South Vietnamese government in 1975 that resulted in a unified communist government in the country. The war also led to the death of almost 2 million Vietnamese civilians, 1.2 million Northern soldiers and many service members. Emigration of Vietnam soldiers took place around the late 1970s from Vietnam.

South Vietnamese troops waded through the water to flush out communist rebels in 1962. The cost and casualties of the war were too much for America to face; thus, the U.S. combat units were withdrawn by 1973, and in 1975 South Vietnam was fully invaded by the North. 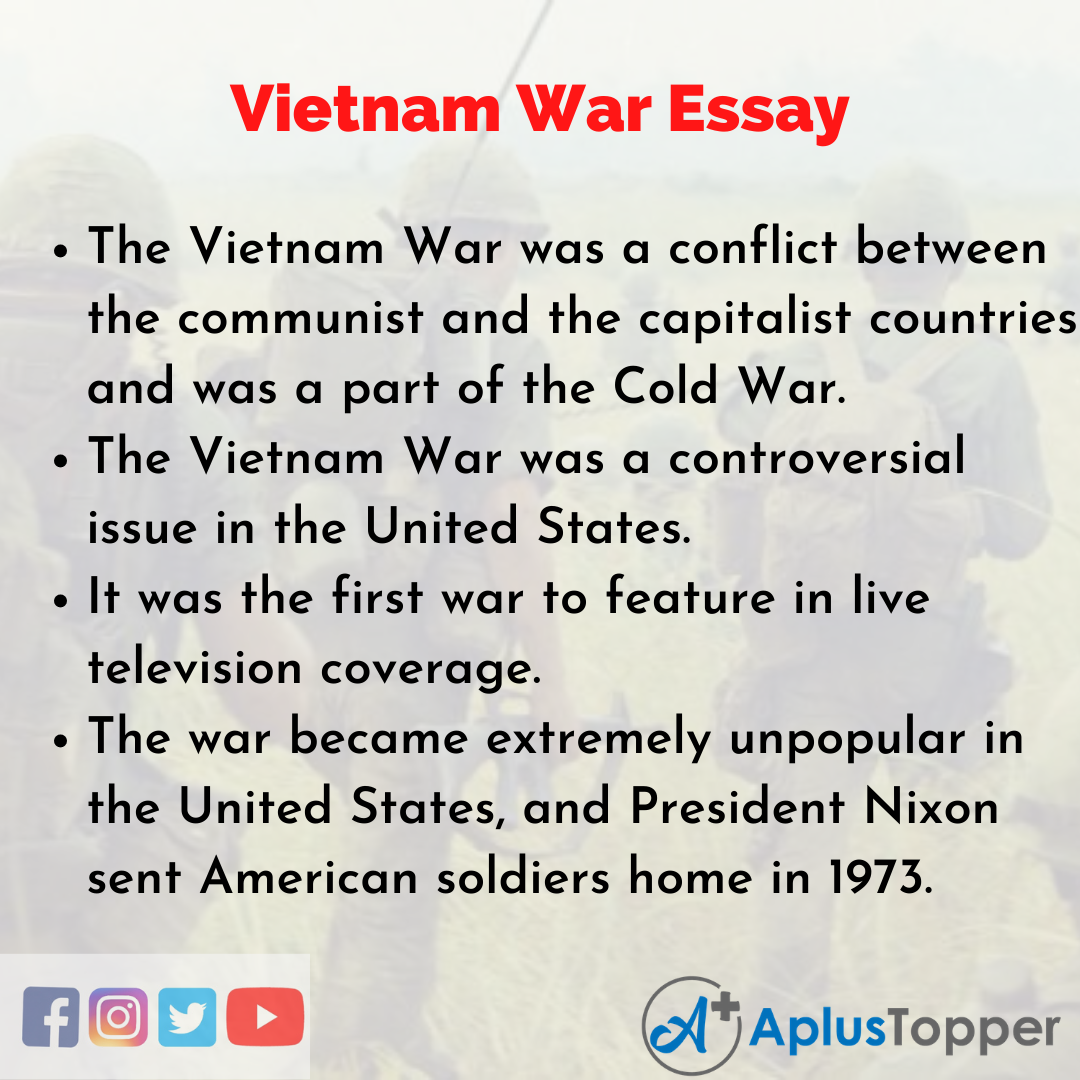 The Vietnam War (1954-1975) is referred to the period when the United States and other members of the South East Asian Treaty Organization (SEATO) joined forces with the Republic of South Vietnam to contest communist forces that were comprised of South Vietnamese guerrillas and the regular force units called the Viet Cong.

The United States possessed the largest foreign military presence and had directed the war from 1965 to 1968. Thus, for this reason, Vietnam today is known as the American War. It was considered as the direct result of the First Indochina War between France that claimed Vietnam as a colony and the communist forces which were then known as Viet Minh.

The Vietnam War was one of the longest wars in the history of the United States and was extremely divisive U.S., Europe, Australia and elsewhere. The U.S. suffered a casualty of 47000 being killed in action with the addition of 11000 non-combat deaths. Over 150000 were wounded, and 10000 were missing.

1. The Vietnam War was a conflict between the communist and the capitalist countries and was a part of the Cold War.
2. The Vietnam War was a controversial issue in the United States.
3. It was the first war to feature in live television coverage.
4. The war became extremely unpopular in the United States, and President Nixon sent American soldiers home in 1973.
5. Viet Minh waved their flag at Dien Bien Phu in 1954.
6. The French defeat at the Battle of Dien Bien Phu led to the Geneva conference.
7. France began to colonize Vietnam between 1959 and 1962.
8. France also took control over Saigon.
9. Laos was added after the war with Thailand.
10. In 1940 the French Indochina was controlled by Vichy French Government. 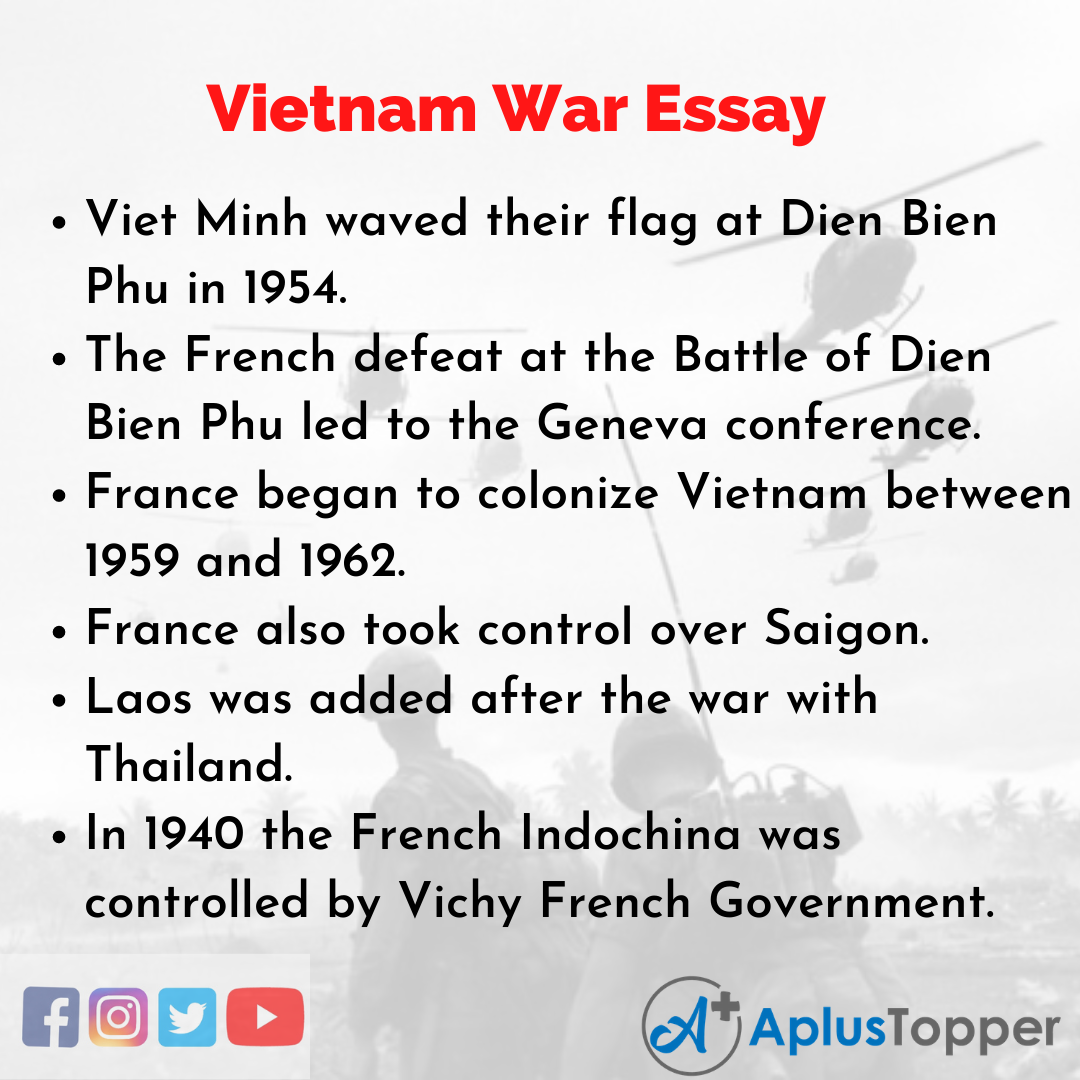 Question 1.
What is the main cause of the Vietnam War?

Answer:
Spread of communism during the cold war along with American containment was the main cause of the war.

Question 2.
What was the effect of the Vietnam War?

Answer:
The most immediate effect was the staggering death toll of almost 3 million people.

Question 3.
Why was the Vietnam War fought?

Answer:
The USA feared the spread of communism, which led the war to be fought.

Question 4.
When did the military fight occur in the war?