Video Games Essay: Video games are electronic games that requires a user interface, input device (it can be joysticks, controllers, motion-sensing devices, keyboard, etc.) that generates visual feedback for the player or players, an output device that is either a two or three-dimensional display device (like TV monitor, touchscreen, VR headset, etc.).

Video games also are augmented with audio feedback using either headphones or speakers. Other types of augmented feedback systems of video games include haptic technology.

Video games have undeniably become an imperative part of most of our life, either as a form of entertainment and even hobby. Video games came into existence through the invention of the Cathode Ray Tube Amusement Device by Thomas T Goldsmith Jr. and Estle Ray Mann in 1947. And in 1948 they got the patent for their invented device with knobs and buttons used for stimulating airborne enemies. It was not until the 1970s, and 1980s those video games reached the mainstream popularity.

One of the biggest technological evolution examples is that of what is seen in video games. Over the years there had been massive changes and several creations since the first released video game. Before the age of Playstation, Xbox, or even computer games, people used to be engrossed in playing video arcade games and later the 8-bit video games using consoles, joysticks, and other controllers. Now we have video games with much higher graphics, better storyline, and even more options. This makes the gaming experience more thrilling and enjoyable; however, it does not change the fact that video games have turned almost an entire generation into couch potatoes.

It is no news that video games are fascinating and because of the graphics along with sound effects gives the player a real-like experience. The video game industry has also started experimenting with virtual reality resulting in even more realistic games which give the player the sensation of truly witnessing the activities of the game. Bur we all know that technology is both a good and a bad effect. The condition is not much different when it comes to video games as well. There are several benefits of playing video games; similarly, there are also adverse effects of the same.

The positive effects of video games include developing one’s skills, like strategic thinking, quick learning, cooperation, creativity, etc. Simulations which are based on the similar technology behind video games are used for training purposes (like shooting, golfing, driving, etc.). Simulations have helped in reducing the risk of accidents occurring during training by allowing the user to practice longer without the requirement of frequent maintenance.

However, there are also some very destructive negative effects of video games. Firstly, children and young adults often get very addicted to playing video games and end up wasting a lot of time and becoming socially isolated. Another aspect of video games which has affected the players immensely is the increase in the violence and aggressiveness in them while trying to imitate the competitive traits of the game.

As intelligent beings, we must use our wisdom and self-control to spend our time wisely and efficiently while avoiding things that have the potential of causing us harm. The gaming industry should monitor the type of games being manufactured and restricting the game for the age for only which it is suitable. Players too should understand the negative impacts of excessive video game playing and addiction. Hence, it can be concluded that the effect of video games depends a lot on the player. 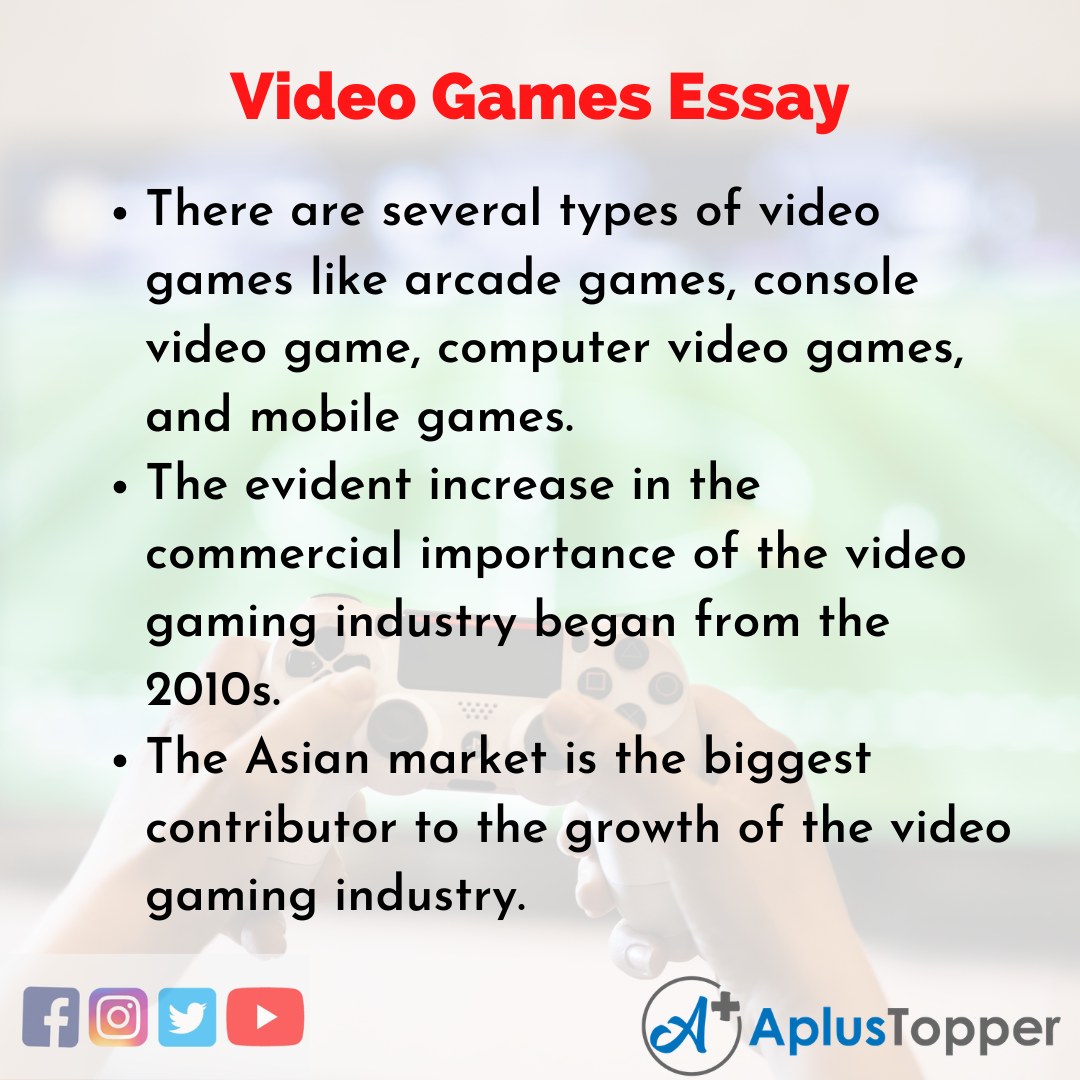 The electronic games that involve the user interface interacting with a human that results in generating feedback onto the video device are called video games. The platforms are the electronic devices used for playing various video games. The size of platforms or gaming units can range from large mainframe computers to even small handheld devices. The trend of playing video games became prominent from the late 1970s and has only increased over time with the advancement of technology. At present, the global value of the video game industry is stated to be USD 152 billion approximately.

The large scale engagement of youth and people of other age groups as well has turned video games into a trend factor. However, there has been a lot of debate on the matter of the positive and negative impact of games on people. Thus, both the industry and the user need to monitor the content of the games being made, and the amount of time being spent on it, respectively.

10 Lines on Video Games in English 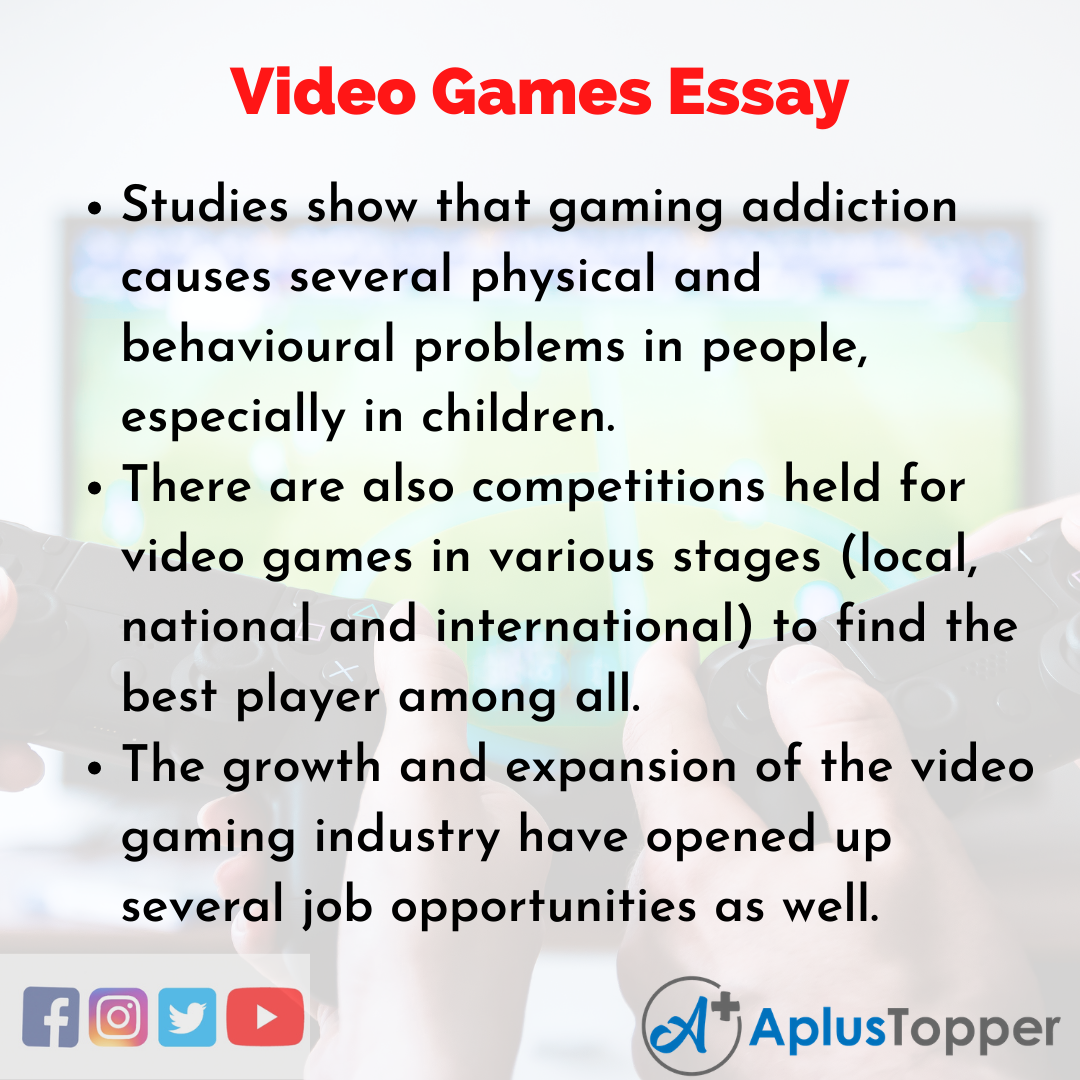 Question 2.
Which is the most iconic video game character of all time?

Question 3.
What is the first invented video game?

Answer:
Tennis for Two is the first video game, and it was created in 1958.