Universal Basic Income Essay: A program where each citizen, regardless of whether they are working and earning an income or not, receives a flat monthly payment. A negative income tax was proposed by economist Milton Friedman.

The low income fell below a minimum level. They would receive a tax credit. The tax payment would be equivalent to for the families earning above the minimum level. An unconditional basic income can improve the marketability by going back to school and would enable workers to wait for a negotiate better wages or better job.

We provide students with essay samples on a long essay of 500 words and a short essay of 150 words on the topic Universal Basic Income for reference.

Long Essay on Universal Basic Income is usually given to classes 7, 8, 9, and 10.

Universal basic income is a program where each citizen, regardless of whether they are working and earning an income or not, receives a flat monthly payment. Different programs outline who exactly receives the income— may only give it to those who fall below the poverty line while other programs provide all citizens from some state would get it regardless of what they make.

A guaranteed income would abolish poverty, which means reducing income, as well as inequality, was said by Martin Luther King Jr in 1967. A negative income tax was proposed by economist Milton Friedman. The low income fell below a minimum level. They would receive a tax credit. The tax payment would be equivalent to for the families earning above the minimum level.

Hughes would work through a modernization of the earned income tax credit and guaranteed plan of income, which is financed by taxes on the top 1%. Hughes said that the employment market got destroyed by automation and globalization. Globalization created a lot of contracts, part-time, and jobs that are temporary. Such job positions cannot provide a decent standard of living. That isn’t enough. A guaranteed income is inevitable was consider by Sir Richard Branson.

The fundamental structure of the U.S. economy got changed by automation. Elon Musk said robotics would take away most people’s jobs, so a universal income is the only solution. An unconditional basic income can improve the marketability by going back to school and would enable workers to wait for a negotiate better wages or better job.

The problem with existing welfare programs would be removed, especially for the people living below the poverty line. Welfare recipients will lose food stamps, housing vouchers, and medical care if they make too much. The poor are prevented from building their wealth to better their lives due to the form of inequality in the structure.

Administrators and Recipients get complicated by Current welfare programs. Other programs like housing vouchers, food stamps would be replaced by a universal income.

Some countries are concerned about the falling rate of birth and population, and young couples will be provided with the confidence to start a family if they are provided with a guaranteed income. It would also provide workers with the confidence to bid up wages. From a macro viewpoint, it would give society a much-needed ballast during a recession.

There are certain disadvantages, too, like it would create inflation if everyone suddenly received a basic income. The demand drives up as most people would spend the extra cash immediately. Manufacturers would try to produce more as the retailers would order more. But they would raise prices if they couldn’t increase the supply.

Eventually, the basics will be unaffordable to people from the bottom of the income pyramid due to higher prices. A guaranteed income would not successfully do a raise in people’s standard of living in the long run. Work skills or a good resume would not be acquired by them. The Universal Basic Income can prevent them from ever getting a good job in a competitive environment and can also reduce an already-falling labour force participation rate. 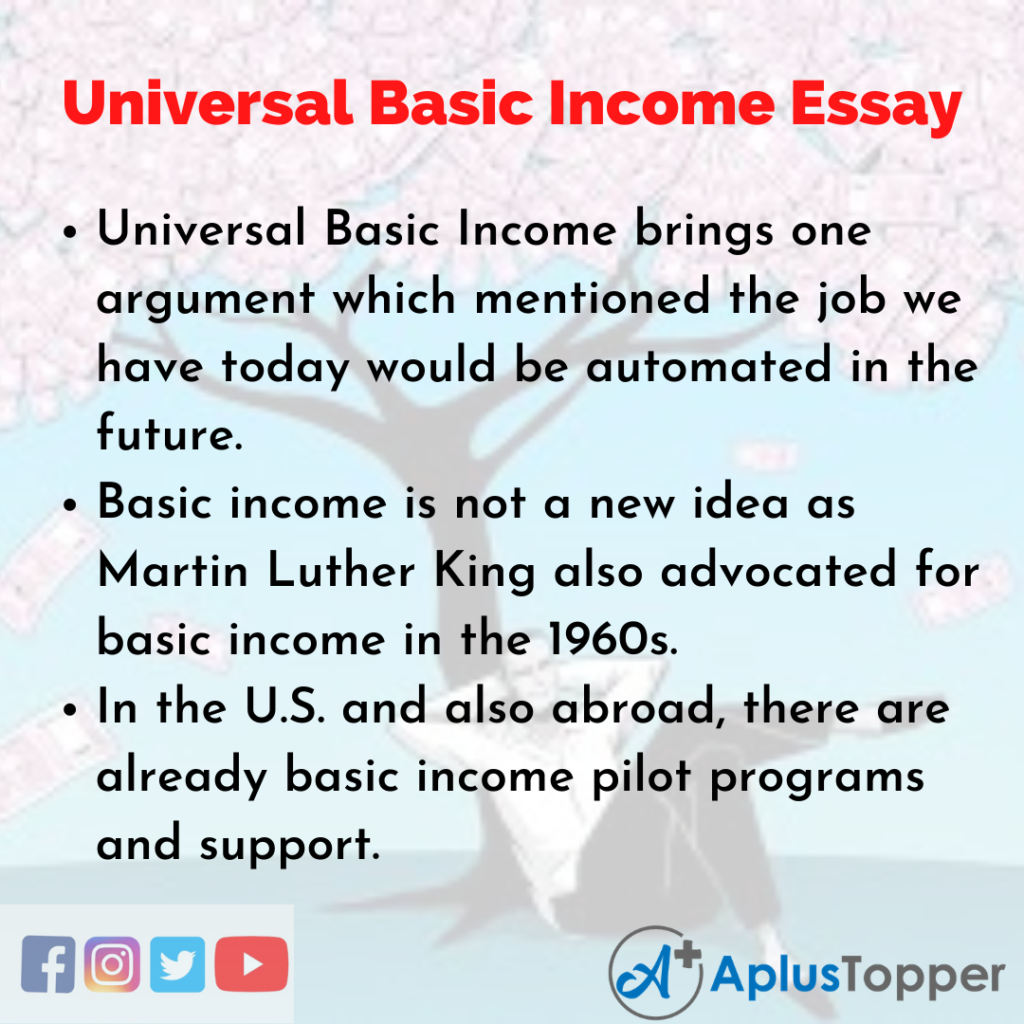 Universal Basic Income (UBI) is a program by the government under which every adult citizen will be receiving a set amount of money from the government regularly.

As an increase in automation replacing workers in manufacturing and other sectors of the economy, in the U.S., the idea of universal basic income gained momentum. The idea of providing a guaranteed, regular payment to citizens, regardless of their need, has been around for centuries now.

A universal basic income was made a key pillar and helped shine a national spotlight on the issue by Democratic presidential candidate Andrew Yang when addressed in his campaign in the year 2020.

Yang plans to provide every American adult $1,000 per month from the federal government, although UBI proposals varied in size. Some plans representing more than half the entire federal budget become one of the core criticisms of basic income.

The goals of a proposed basic income system should be to alleviate poverty and replace other need-based social programs that potentially require greater bureaucratic involvement.

1. Universal Basic Income brings one argument which mentioned the job we have today would be automated in the future.
2. Basic income is not a new idea as Martin Luther King also advocated for basic income in the 1960s.
3. In the U.S. and also abroad, there are already basic income pilot programs and support.
4. Universal basic income does not require a necessary payment for a daily living wage.
5. The Permanent Fund Dividend program in Alaska may currently be the closest the world has come to basic income.
6. The world’s leading start-up accelerator, is running its basic income pilot with one hundred families in Oakland, California.
7. Currently, we are in a situation when technological progress and globalization seem to break the connection between productivity, growth, and human well-being.
8. Basic income is not an application to save the industrial society, but it could be the start of a new operating system for the post-industrial society.
9. A desperate need of a forward-looking and unifying vision to save us from the tyranny of what “majority politics” has suddenly turned into.
10. UBI concept is not new to India. We had our own named schemes like NOAPS, IGNWPS, IGNDPS, RythuBandhu scheme, DBT scheme, etc. 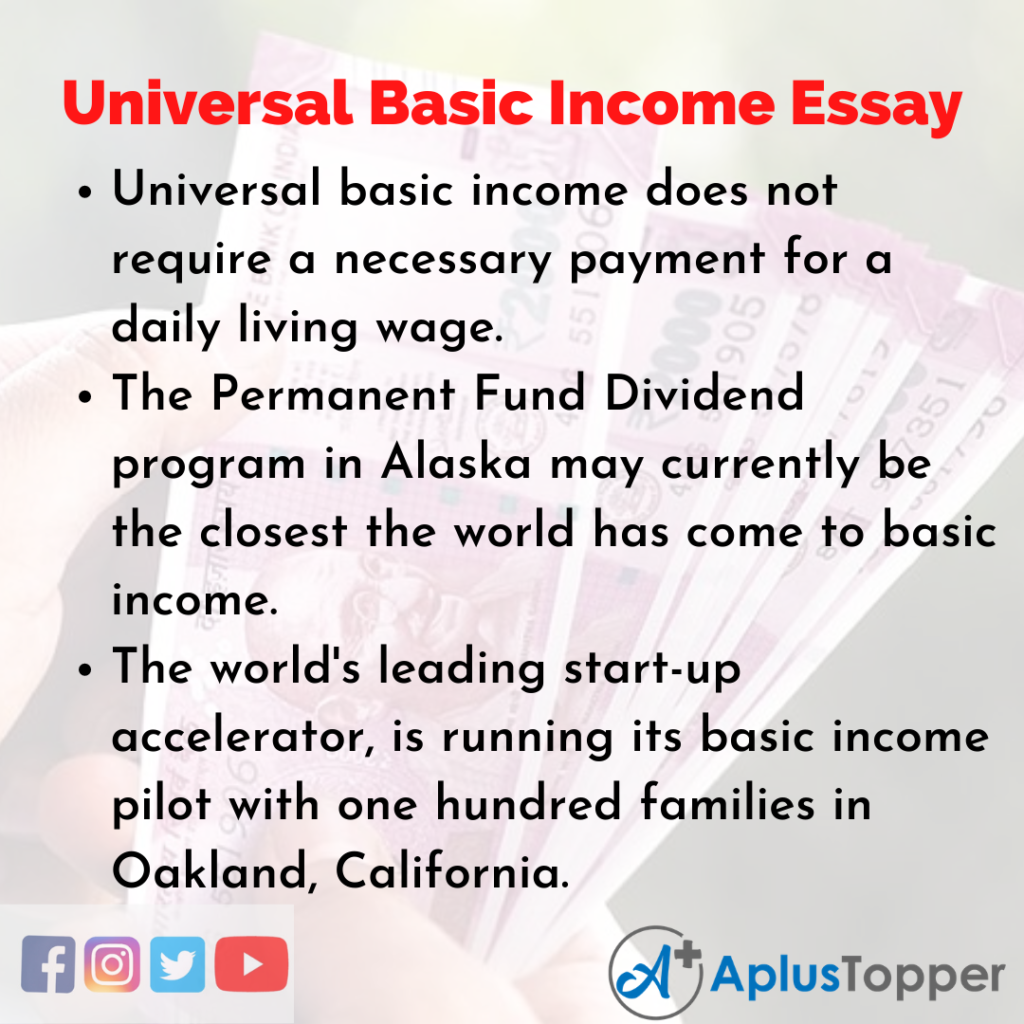 Question 1.
Do any countries have a universal basic income?

Answer:
Currently, no country has a universal basic income in place. Mongolia and the Islamic Republic of Iran had a national UBI for a short period.

Question 2.
Does Sweden have a universal basic income?

Answer:
UBI has been debated in the country Nordic since the 1970s. However, Finland conducted a basic income pilot who got international attention.

Question 3.
How much is the minimum wage in Finland?

Question 4.
Does Norway have a universal basic income?

Answer:
Norway is the country closest to universal basic income as the country has access to certain fundamental goods, including access to education, health care, and income in the form of social security or benefits.