Uniform Civil Code Essay: Uniform Civil Code marks the state of equality in the country, meaning that every section of the society is treated alike, concerning the national civil code, without any discrepancy for any religion.

Many societal aspects are covered in this broad umbrella. They include areas like marriage, maintenance, adoption, divorce, inheritance, property succession and many others. The provision of a uniform civil code is one among the many promises made by the current ruling party of India, which is the Bharatiya Janata Party.

We are providing students with essay samples on a long essay of 500 words and a short essay of 150 words on the topic “Uniform Civil Code” for reference.

The term Uniform Civil Code, originating from the Sanskrit term Samāna Nāgrika Saṃhitā, is a promise of secularism in India by the Preamble. It is also a source of dispute for many minority communities, including the Muslims, and various other conservative groups of the Indian society. The conflict arises due to demands of personal law from these groups owing to some personal religious beliefs and rituals.

There is a provision in Article 44 of the Indian Constitution, within chapter IV named Directive Principles of State Policy that makes way for a condition for a uniform civil code in the entire geographical territory of India.

The historical perspective of this code dates back to the debates in the colonial period in the country. In October 1840, the Lex Locireport drew attention to the urgency of making a uniform law concerning crimes, pieces of evidence and so on.

The condition of women in the colonial period was inadequate. There were several social reformers like Raja Ram Mohan Roy, Ishwar Chandra Vidyasagar, who took essential steps for minimizing the plight of women. The struggle for uniform civil code had already begun then.

In the post-colonial era, this code became more prominent in the hands of eminent Indian leaders, like Dr B.R Ambedkar and Jawaharlal Nehru. This code also received the support of many women members of the then parliament. Irrespective of the severe criticisms that Dr B.R Ambedkar faced for his apparent dislike of upper castes, he pushed forward in his demand for a uniform civil code.

This code underwent several reforms in the time immemorial. Some of the significant reforms include the Hindu Code Bill that made divorces legal and made objections to polygamy, the succession act of1956 that made the daughters in the family an equal heir to ancestral property. Hindu marriage act, adoptions and maintenance act were some other reforms.

A case that is very intricately connected with uniform civil code is the Shah Bano case, in the year 1985. Shah Bano, a woman with 73years of age was a divorcee. Her husband used the triple talaq method. Apart from the divorce at such an age, she was also denied maintenance. When she moved to court, all the judgements came in her favour, and the demand for a uniform civil code strengthened.

You can now access more Essay Writing on Uniform Civil Code and many more topics.

As the Directive Principles of State Policy are not enforceable by courts, there has always been a lot of debate around the provision of uniform civil code. There exists a dualism in the constitution itself, as although it makes uniform civil code essential there is no way that this could be made mandatory.

There have been several arguments that are given in favour of this idea. With a uniform civil code, the country will make sure that the women receive more rights, the concept of secularism will cease to be a mere idea. Constitution will be able to implement it for each individual residing in the country. 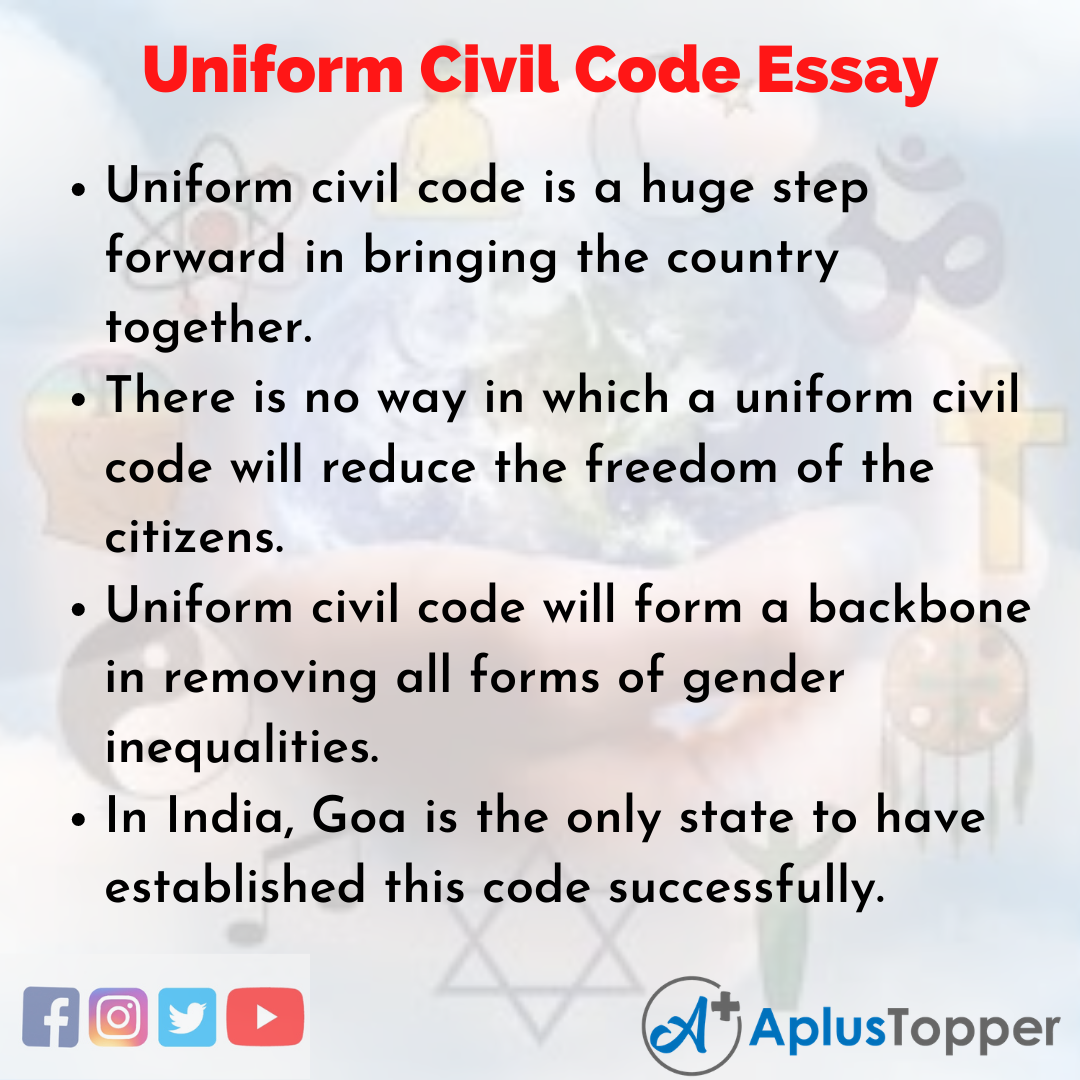 To have a more progressive and broadminded outlook in society, the requirement of a uniform law is essential. This idea of a unified direction for the country is the uniform civil code. It is a much-debated topic, and the task of actually establishing it in the society is not an easy one.

Numerous communities have raised the demand for a set of personal laws. But these laws are a loophole, which encourages age-old orthodox values. Since our constitution makes it essential that each citizen must receive equal treatment, it will only be possible if there are public laws only.

There are numerous challenges in the way of its implementation, like lack of political will, misinformation, etc. India is a country with innumerable communities and huge population. It is not possible to prioritize a particular community. So the establishment of a uniform civil code is crucial for the proper functioning of the society. Question 1.
What are some reforms to uniform civil code?

Answer:
Many cases and reforms have taken place for implementing this code: the Hindu code bill, the minority and guardianship act, special marriage act, succession act.

Question 2.
What is the Sarla Mudgal case?

Answer:
This case was crucial to the formulation of a uniform civil code. This case raised the question if a Hindu husband could practice polygamy if he embraced Islam.

Answer:
Since this code looks forward to providing a unified law for the country, so it will be one crucial step to make the society modern.

Question 4.
Will this code limit freedom?

Answer:
This code means every person is treated equally, so in no way it will limit freedom of the people.