Types of Bread Vocabulary: Bread is a typical dish that people from the whole world love. Every country has a bread that is unique to them. It is a staple food item paired with a dish that is rich in taste to balance out the meal. Countries with English as their native language are no different. It would be better if you know all the bread-related vocabulary.

Knowing the bread vocabulary would be great the next time you are at a bakery or a restaurant placing your order. Let’s have a look at some of the most common types of bread.

Different Types Of Loaves Of Bread

Bread is a dish made with different types of flour by combining it with water and yeast to form a dough. The dough is then shaped and baked into the oven. The shape and color of the bread is the determining factor in which type of bread it is. Any added flavoring agent also defines the bread type. Let’s have a look at some of the most common bread types.

Bagel is a type of bread that originated from Jewish families in central Europe. It consists of essential bread ingredients like flour, yeast, water, sugar, and salt. The dough is allowed to rise and then divided into more petite balls shaped as a ring with a hole in the middle and first boiled for some time and then baked. This bread is popular for breakfast or as a snack by adding some toppings like smoked salmon or cream cheese.

Breadsticks are often paired with soups or dips of some kind. You can have them as a snack by topping them with butter, cheese, and garlic. Topping them with sugar and cinnamon makes them a great dessert.

Croissant is a flaky, buttery kind of bread that gets its name from its unique crescent shape. The flakes in the bread are a result of the layering of dough multiple times.

The dough is flattened using a roller and then layered with butter, folded, and rolled again. These steps are repeated several times before baking, and that is what gives the croissant a flaky texture which is like the texture of puff pastry.

Croissants originated from Austria in the 13th century, and the most common way to have a croissant is by pairing it with coffee or tea. You can also put different toppings like chocolate or cheese on a croissant by slicing it in half.

A doughnut or donut is a type of bread that is fried instead of baked. It is a type of dessert made from leavened dough. The most popular shape of donuts is rings and holes.

The ring-shaped donuts are made by attaching the ends of a long piece of dough or by removing a circular piece from the middle of a dough ball by using a donut cutter. The small piece remover from the center is the donut hole, which is another most common form of a donut.

Once shaped, the donuts are then deep-fried in oil and, after removing from the oil, topped and flavored with different types of sweeteners. The most common form of donut is sugar-glazed or sprinkled with powdered sugar and cinnamon. Other toppings include sprinkles, chocolate, or maple glazing.

You can also have donuts with fillings. In these types of donuts, the center parts are filled with cream, fruits, or jellies.

A Baguette or french bread is a long and thin loaf of bread. This type of bread has a distinct long shape and a crisp crust.

Baguette recipes consist of essential bread ingredients like flour, yeast, water, sugar, and salt. The dough is shaped into long thin rolls, and then slits are cut into the top portion, which provides a beautiful appearance to the bread when baked and allows the bread to expand.

One of the most common ways to eat a baguette is by cutting thick and slanted pieces of the loaf and adding different toppings like cream cheese and basil. Another way to pair it with a side dish is by topping it with butter and toasting it.

A hamburger bun is a type of bread used for making burgers. The term hamburger originates from Hamburg, a city in Germany.

The bun recipe includes flour, oil, yeast, sugar, salt, and water. The dough is then shaped into small balls and allowed to rise for a few hours before baking. The baked bread is known as buns, and aside from making hamburgers by topping it with meat and veggies, you can have it as a dessert by adding jams and jellies as toppings.

A hot dog bun is a bread specifically designed to be suitable to hold a hot dog or any other sausage. It is a soft bread made using essential bread ingredients like flour, oil, yeast, sugar, salt, and water. The dough is allowed to rest before shaping them in short, thin rolls and then brushing them with egg wash on top before baking.

For serving hot dogs using this bread, you have to cut the bread into the middle making sure that one side remains joined. Layer mustard and ketchup and put any of your favorite sausages in the middle, and you are done. 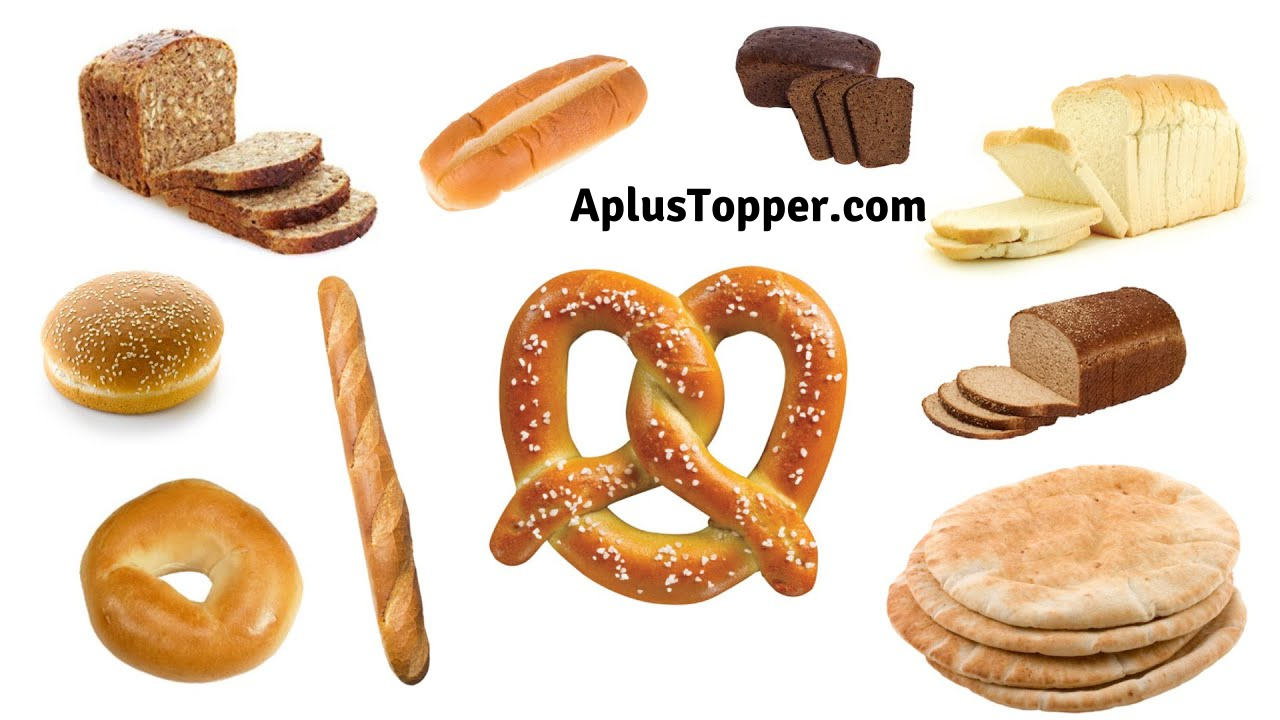 A jelly roll is a type of bread that is eaten as a dessert. It consists of a thin layer of cake topped with jam, jelly, or buttercream and then rolled. The rolled cake is then cut into 1 inch thick pieces. The cake layer can be of any flavor of your choice.

A pretzel is a type of bread that is shaped into a form of knot. It has a distinctive shape made using a long thin piece of dough by intertwining and then twisted onto itself in a specific way. You can top the baked pretzel with sugar, chocolate, nuts, seeds, and cinnamon.

The pretzels can be either soft that you have to eat shortly after baking and hard pretzels that you can store for long.

A roll is a type of bread that has a round or oblong shape. The ingredient list is standard as other bread recipes. It consists of flour, water, yeast, sugar, and salt. The dough is divided into small round or oblong balls and baked.

You can eat it as a whole by applying butter or plain with your main course. You can also cut it into pieces and top it with different toppings. One other common way to eat a bread roll is by making a sandwich using two cut pieces.

Rye bread is a type of bread that uses flour made using rye grain. The rest of the process of making rye bread is similar to other breeds. You combine flour, sugar, salt, water, and yeast and then form a dough. Then you shape the dough and bake it.

This flour is then combined with other common ingredients like water, yeast, oil, salt, and sugar, and a dough is formed. You then let the dough rise and then shape it into a loaf and then bake it. You can use this bread for sandwiches.

White bread is the most common type of bread used for sandwiches. It is made using wheat flour made by grinding wheat from which the bran and germ layer had been removed. This type of flour is commonly known as all-purpose flour.

The white bread recipe is the most common form of bread. It uses all-purpose flour, water, sugar, salt, and yeast, and then the dough formed is baked.

The whole grain bread is a type of bread made using flours containing entire wheat kernels complete with bran and germ layer. Other than that, whole grain bread also includes other whole grains like brown rice, oats, and barley. This is the healthiest form of bread that has many health benefits.

A slice of whole-grain bread is often used by people watching their weight.

Conclusion on Types of Bread Vocabulary

While the bread types are vast and this list doesn’t even cover the tip of it. These bread types should be more than enough for you to get by. Now you can easily place an order at a restaurant without hesitation on which kind of bread you want with your main course.