Tsunami Essay: The term Tsunami comes from the Japanese language and means harbour wave. Tsunamis are seismic waves that are caused by earthquakes which travel through water. An earthquake that is too small to create a tsunami by itself may trigger an undersea landslide quite capable of generating a tsunami.

Below we have given a long essay on Tsunami of 500 words is helpful for classes 7, 8, 9 and 10 and Competitive Exam Aspirants. This long essay on the topic is suitable for students of class 7 to class 10, and also for competitive exam aspirants.

Tsunami can be generated when the sea floor abruptly deforms and vertically displaces the overlying water. Such large vertical movements of the earth’s crust can occur at plate boundaries. Although often referred to as ‘tidal waves’, a tsunami does not look like the popular impression of ‘a normal wave only much bigger’. Instead, it looks rather like an endlessly onrushing tide which forces its way around and through any obstacle. Most of the damage is caused by the huge mass of water behind the initial wave front, as the height of the sea keeps rising fast and floods powerfully into the coastal areas. The sheer weight of water is enough to pulverise objects in its path, often reducing buildings to their foundations and scouring exposed ground to the bedrock. Large objects such as ships and boulders can be carried several miles inland before, a Tsunami subsides.

Recently, it has been discovered that larger Tsunamis than previously believed possible could be caused by landslides, explosive volcanic actions and Earth-scouring impact events. These phenomena rapidly displace large volumes of water, as energy from falling debris or expansion is transferred to the water into which the debris fall. Tsunamis caused by these mechanisms, unlike the ocean-wide tsunamis caused by some earthquakes, generally dissipate quickly and rarely affect coastlines distant from the source due to the small area of the sea affected.

Tsunamis move the entire depth of the ocean (often several kilometres deep) rather than just the surface, so they contain immense energy, propagate at high speeds and can travel great trans-oceanic distances with little overall energy loss. A Tsunami can cause damage thousands of kilometres from its origin, so there may be several hours between its creation and its impact on a coast, arriving long after the seismic wave generated by the originating event arrives.

In open water, Tsunamis have extremely long periods from minutes to hours, and long wavelengths of up to several hundred kilometres. This is very different from typical wind-generated swells on the ocean, which might have a period of about 10 seconds and a wavelength of 150 metres.

A few signs may be triggered by nature to warn a huge tsunami wave. An earthquake may be felt. Large quantities of gas may bubble to the water surface and make the sea look as if it is boiling. The water in the waves may be unusually hot. The water may sometimes smell of rotten eggs due to the presence of hydrogen sulphide or of petrol or oil. The water may sting the skin.

A thunderous boom may be heard followed by a roaring noise as of a jet plane, a helicopter, or a whistling sound. The sea may recede to a considerable distance.

A flash of red light might be seen near the horizon and as the wave approaches, the top of the wave may glow red. These signals have been recorded from time to time over the ages before every Tsunami tragedy. Oceanographers, scientists, geologists and environmentalists are working on making some kind of systems which can if not prevent atleast signal the impending Tsunami.

The Lisbon quake is the first documented case of such a phenomenon in Europe back in 1 755 which had generated an almost 12 metre high sea wave and had destroyed most part of the city killing around 60000 people. This phenomenon was also seen in Sri Lanka in the 2004 Indian Ocean earthquake. In 2011, the powerful 8.9 magnitude earthquake sent Japan into chaos as it triggered a giant tsunami in the Pacific Ocean, sweeping away boats, cars, homes and people, and led to the loss of more than 15000 lives in Japan.

In some particularly Tsunami-prone countries, measures have been taken to reduce the damage caused on the shores. Japan has implemented an extensive programme of building Tsunami walls of up to 4.5m (13.5 ft) high in front of populated coastal areas. Other localities have built floodgates and channels to redirect the water from incoming tsunamis. However, their effectiveness has been questioned, as Tsunamis are often higher than the barriers.

For instance, the Tsunami which hit the island of Hokkaido on 12 July, 1993 created waves as much as 30 m (100 ft) tall – as high as a 10-storey building. The port town of Aonae was completely surrounded by a Tsunami wall but the waves washed right over the wall and destroyed all the wood-framed structures in the area.

The wall may have succeeded in slowing down and moderating the height of the Tsunami but it did not prevent major destruction and loss of life.

Yet the effects of a Tsunami can be mitigated by natural factors such as tree cover on the shoreline. Some locations in the path of the 2004 Indian Ocean Tsunami escaped almost unscathed as a result of the tsunami’s energy being sapped by a belt of trees such as coconut, palms and mangroves. In one striking example, the village of Naluvedapathy in India’s Tamil Nadu region suffered minimal damages and few deaths as the wave broke up on a forest of 80244 trees planted along the stretches of seacoasts that are prone to Tsunami risks.

While it would take some years for the trees to grow to a useful size, such plantations could offer a much cheaper and longer-lasting means of Tsunami mitigation than the costly and environmentally destructive method of erecting artificial barriers. 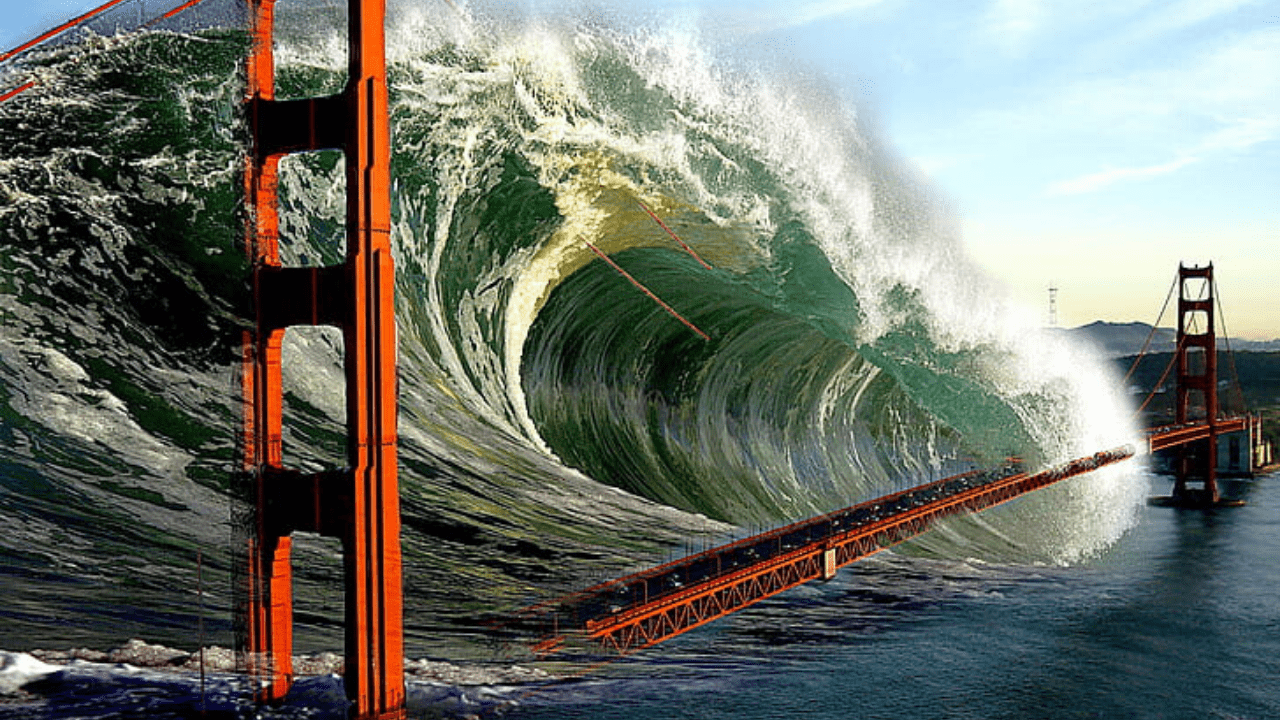 Below we have given a short essay on Tsunami is for Classes 1, 2, 3, 4, 5 and 6. This short essay on the topic is suitable for students of class 6 and below.

Regions with a high risk of Tsunamis may use Tsunami warning systems now available to detect Tsunamis and warn the general populace before the waves reach the coasts. In some communities on the West coast of the United States, which is prone to Pacific Ocean Tsunamis, warning signs advise people where to run in the event of an incoming Tsunami. Computer models can roughly predict Tsunami arrival and impact based on information about the event that triggered it and the shape of the sea floor and the coastal landmass. One of the early warnings comes from nearby animals. Many animals sense danger and flee to higher ground before the water arrives. Monitoring their behaviour closely could provide advance warnings of earthquakes, Tsunamis etc.

In 2011, Earthquake Research Committee of Japanese Government announced that Tsunami forecasts would be started to alert the public in advance about the approaching Tsunamis in near future. This would comprise Tsunamic height, attack area and probability of occurrence within 100 years. Such forecasts should be soon activated in the Indian sub-continent also. The Intergovernmental Oceanographic Commission, UNESCO is working out strategies for this area.

Coastal areas of India are sitting on a ‘Tsunami-bomb’. Awareness and robust measures are the needs of the hour.