Transportation Vocabulary: Your thought to learn Transportation Vocabulary is very good because it is very important for a person to know the names and means of transport to travel from one place to another place. There are about 60 names of transportation vocabulary in English. Some of them may know the pictures of the vehicle but don’t know what they are called it is quite common. So, we are planning to show the pictures of all the vehicles along with the word list. This will be a huge advantage to all of them to know means of transport, transport vocabulary list here. Some of the English Names of Transport Vocabulary are bus, car, airplane, train, chopper, bike, and so on.

Vehicles and Transport Vocabulary – Common Names to Learn in English

Check out the list of vehicles and transportation vocabulary English words from here. 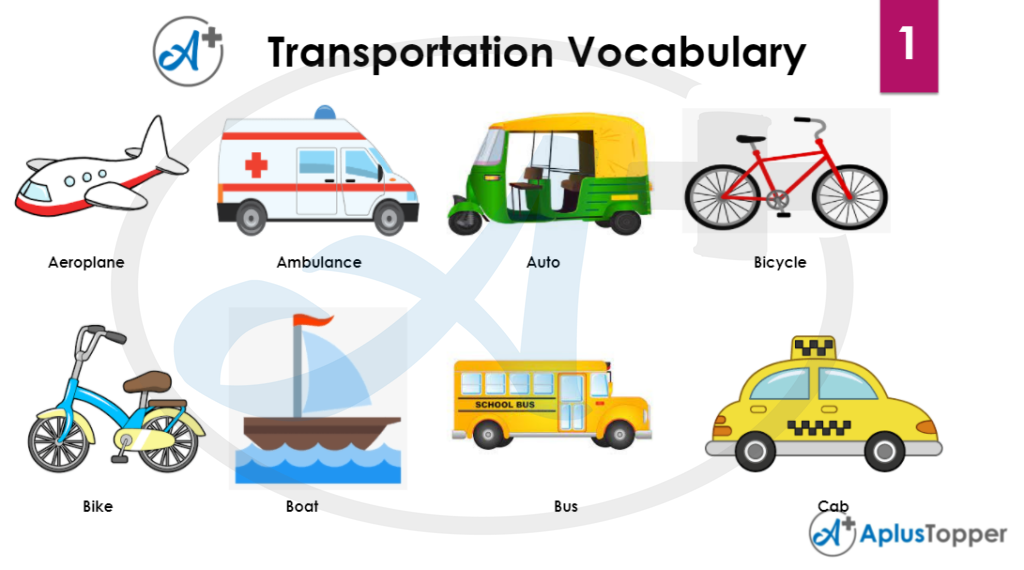 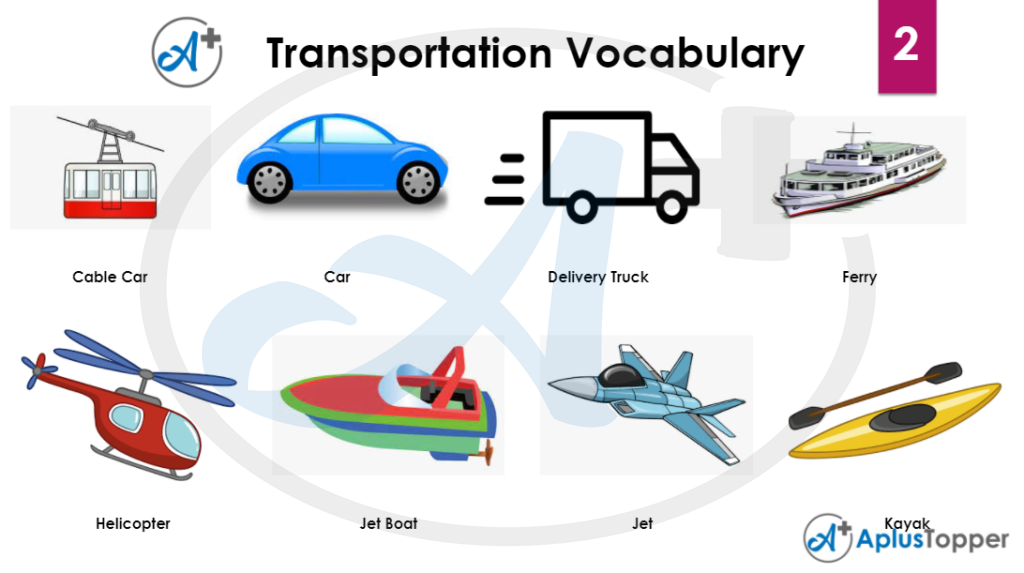 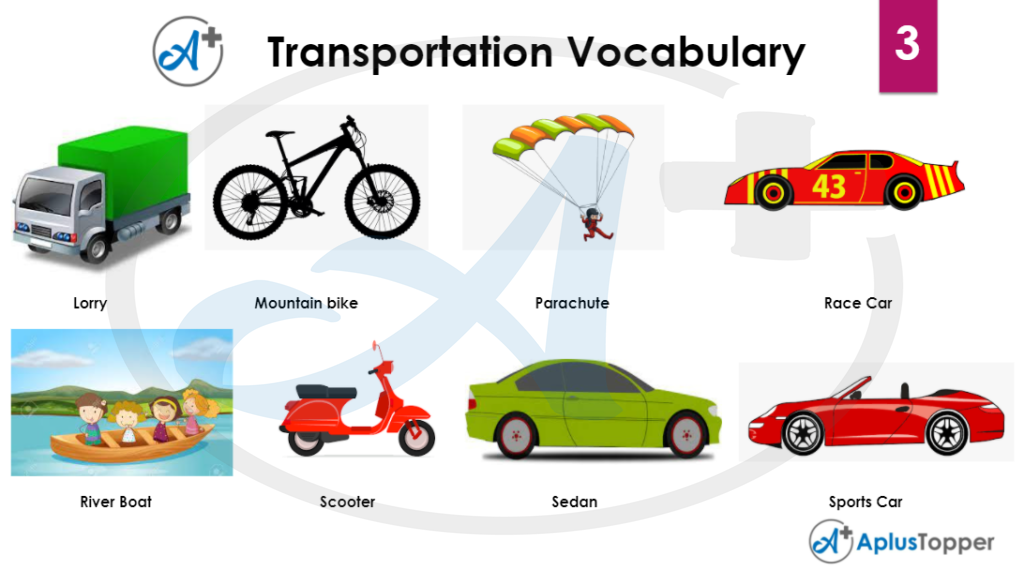 The common names to learn transport vocabulary are shown below with images.

An ambulance is a medically equipped vehicle used for transports a patient to treatment to hospitals used in the emergency are either trucks with space or cargo Rana with raised roofs.

Auto is a 3 wheeled passenger vehicle it carries its own motor it is designed to run primarily on roads it has a sitting capacity of one to six people maximum.

Aeroplane is a flying vehicle that has two fixed wings and engines the aeroplanes are collected by the pilot. The Wright brothers had invented the first successful aeroplane.

The bus is a large motor vehicle carrying passengers from one place to another place by road. It is used for servicing the public on the fixed routes. The bus has a driver and conductor and it has 6 wheels.

A bicycle is a human-powered vehicle having two wheels attached to a frame one behind the other and pedal-driven. It is also called a cycle. A bicycle rider is called a bicyclist.

A bike is a two-wheeler vehicle used to travel long distances. It has a capacity of two numbers to travel and it works with petrol. 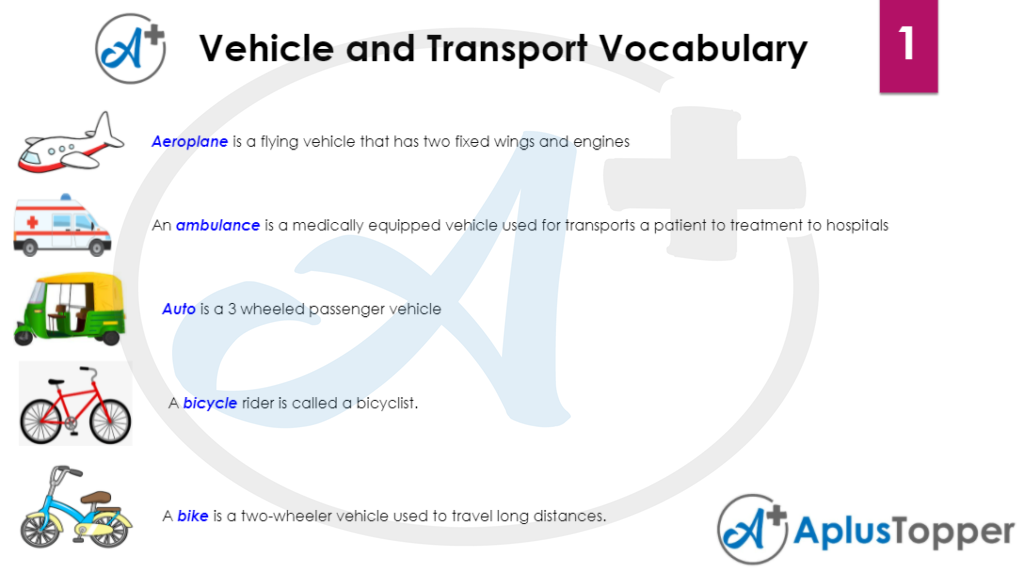 A boat is a watercraft that has different shapes and sizes. It is generally smaller than a ship. The boats are found in waterways such as rivers and lakes.

A car is a road vehicle. It has four wheels, it is powered by an engine and it is able to transport a small number of people.

The cab is a type of vehicle for a hit with a driver used for a single passenger or small group of passengers for the nonshared ride it is also known as taxi or taxicab it is licensed for pre-booking only.

Cable cars are permanently attached to the cables, it is a continuously moving cable running at a constant speed. The cable is itself powered by a stationary engine or motor situated in a cable house or powerhouse.

Chopper is a type of rotorcraft. It travels in a car, the chopper takes off and lands vertically, it flies forward and backward laterally, it has fixed wings to fly. It is used for transportation, military, news and media coverage, medical transport, etc.

A delivery truck is a large heavy vehicle for delivering goods or services to customers; the other names of the delivery trucks are delivery van and Pavel truck.

A ferry is a type of ship used to carry persons or things across the water; it is especially used for a short distance and regular service.

A helicopter is a type of aircraft without wings. It has one or two sets of large blades on top it can land or take off vertically and can stay in one place in the air.

Jet is an aircraft with fixed wings moved by jet engines. It has a maximum efficiency of low-speed jets that are used for military purposes. 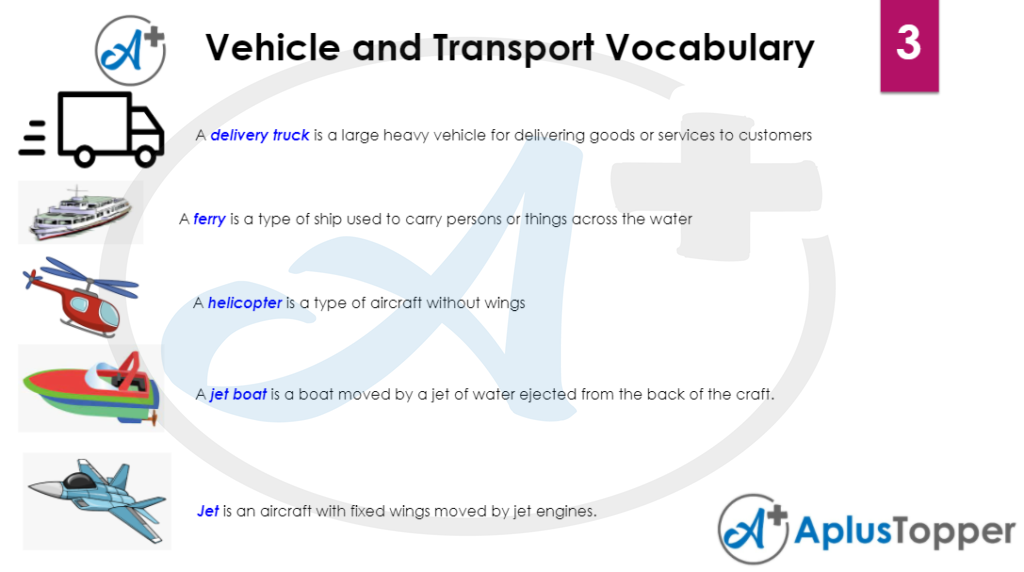 A jet boat is a boat moved by a jet of water ejected from the back of the craft. The jet engines work with gasoline, jet boats can be used in both freshwater and saltwater.

Kayak means a hunter boat or man’s boat. It is made up of a light frame with a watertight covering having a small opening in the top; it is used for hunting the sea animals and for transport also.

Mountain bikes are designed for off-road cycling. Mountain biking has some similarities with other bicycles; it is generally specialized for mountain trails, single track, fire roads, etc.

A parachute is a device used to slow the motion of objects through the atmosphere. It is usually made up of light, strong fabric whose shape is dome-shaped with rectangles, inverted domes.

A riverboat is a watercraft designed for inland navigation on lakes, rivers it carries trades and people transport.

A race car is a car used for car racing, motor racing is a motorsport involving the race of automobiles for competition. 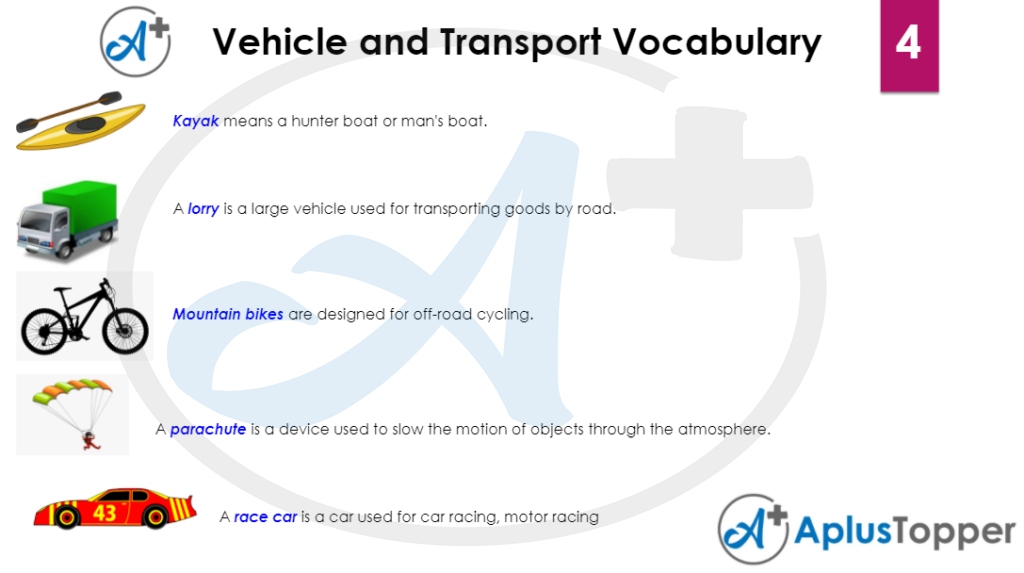 A sports car is a car designed with handling acceleration, top speed, or the thrill of driving.

The sedan is a passenger car with four doors and a separate truck having three bodies. The first box is a home engine, the second is for passengers and the third is for trucks.

A school bus is a vehicle used for transporting children from home to school and school to home or activities connected to the school. The school buses are mostly in yellow color because yellow is the safest color for moving vehicles.

Scooter is a two-wheeled open motor vehicle it is popular for personal transportation it is more convenient to store and park. To drive a scooter we must have a license.

The ship is a large watercraft that travels on the oceans and sea. Who drives the ship is called a caption; it is used for fishing purposes also.

A sailboat is a small boat that uses wind power to move forward. The larger water vessels are moved using sails. It has different names for sailing, sailing yachts etc.

Tram is a train that runs on a tramway track or public Streets the lines or networks operated by tramcars or public transport are called tramways or simply streetcars.

A train is a form of rail transport consisting of a series of connected vehicles that run along the railroad to transport passengers or cargo. 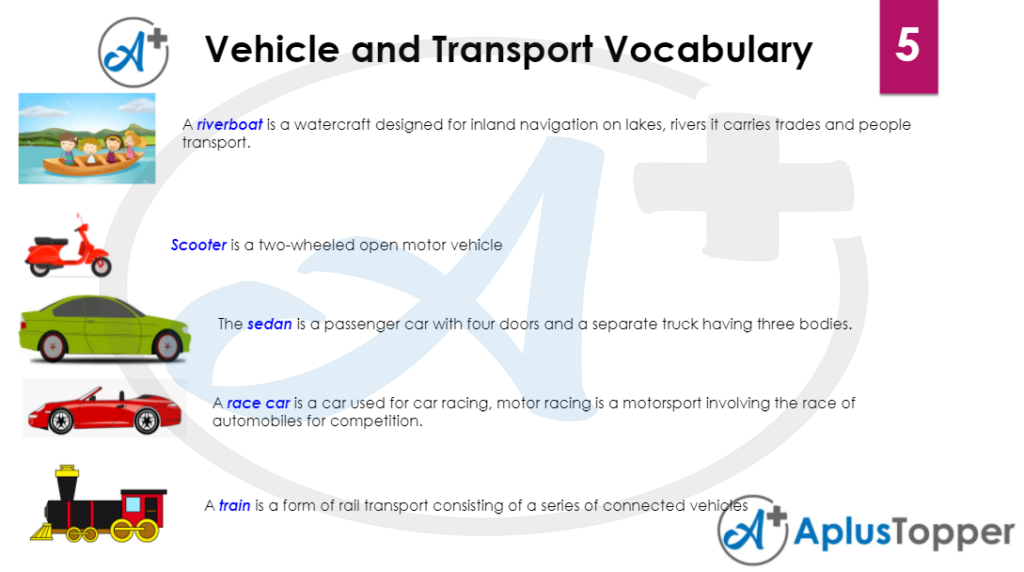 A tugboat is a marine vessel that cannot move at all. It moves with the support of other vessels or tow lines, some are stem engines and some are diesel engines.

The unicycle is a vehicle that touches the ground with one wheel. The well-connected pedal-driven to direct drive unicycling is used professionally in circuses, street performances.

A vessel is a ship or a large boat with a hollow container especially used to hold the liquids and minerals.

Vespa is an Italian luxury brand of scooter manufactured by Piaggio it has 2 wheels and it works with petrol.

Zeppelin is a large German airship that is long and cylindrical in shape. Zeppelins were used in the first world war for bombing and also used for surveillance. 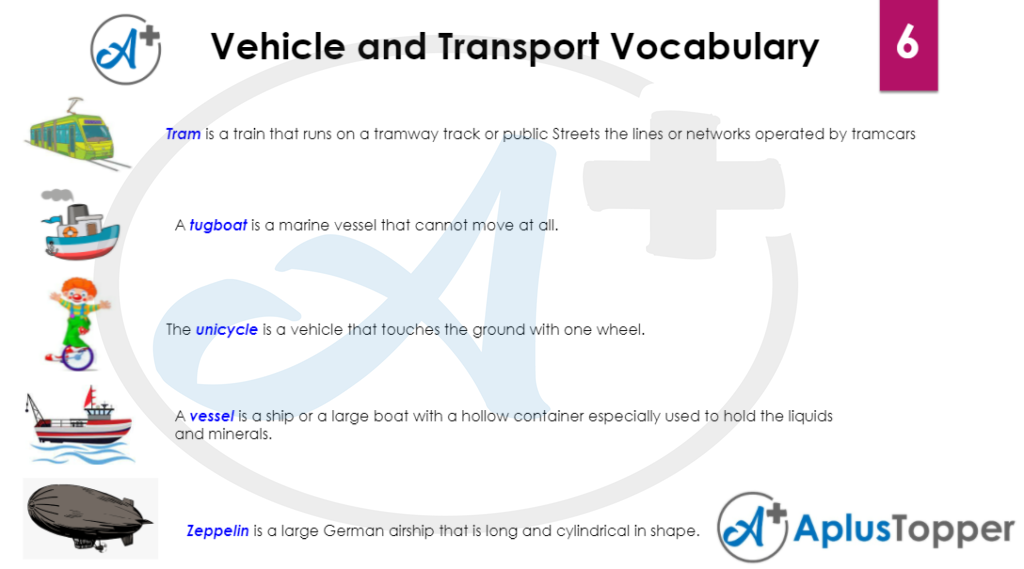 Types of Trucks with Images

The list of trucks with pictures is shown below. 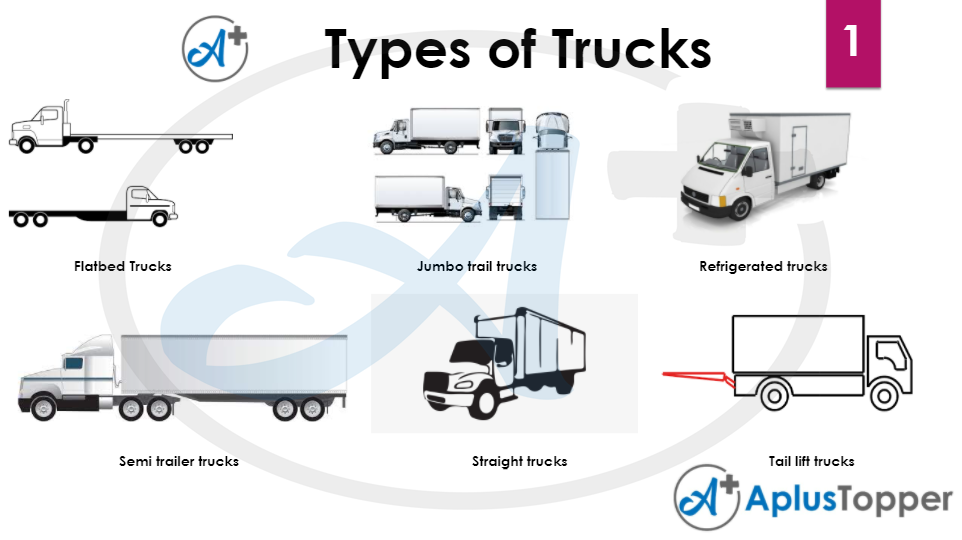 Flatbed trucks have open cargo bed trailers along with drivers’ cabins. They don’t have roofs or sides. Thus it is easy to load or unload the goods or objects.

Refrigerated trucks are used to transport the goods like agricultural, pharmaceuticals, or food products.

Semi-trailer trucks have their own capabilities. These can load around 24,000 kilograms.

Straight trucks are used in logistics that means to travel the goods such as home goods, furniture, appliances, etc. 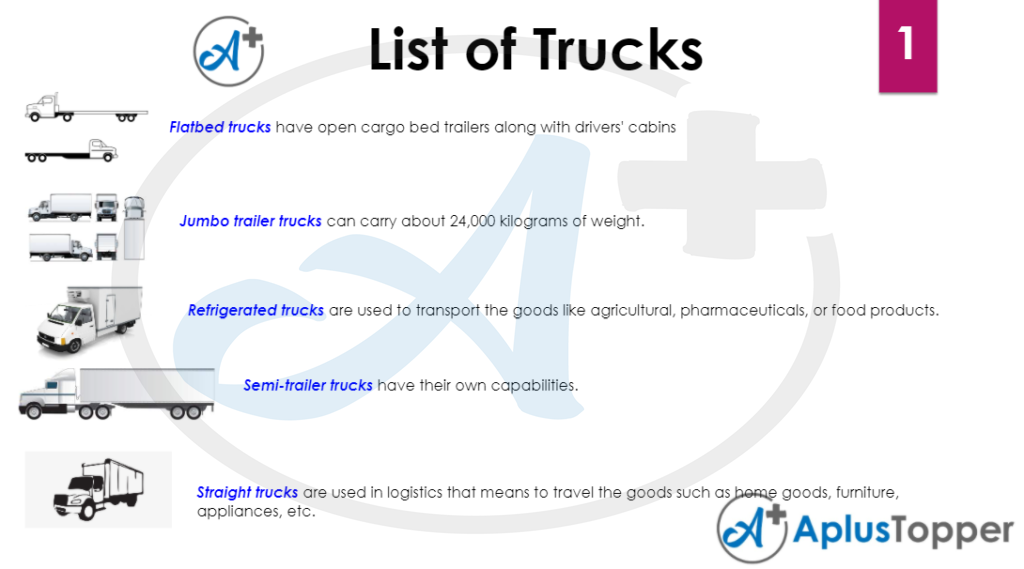 Tail-lift trucks have a lifting mechanism to load goods onto the truck. They carry about 2000 kilograms of weight.

Types of Ships and Boats with Image 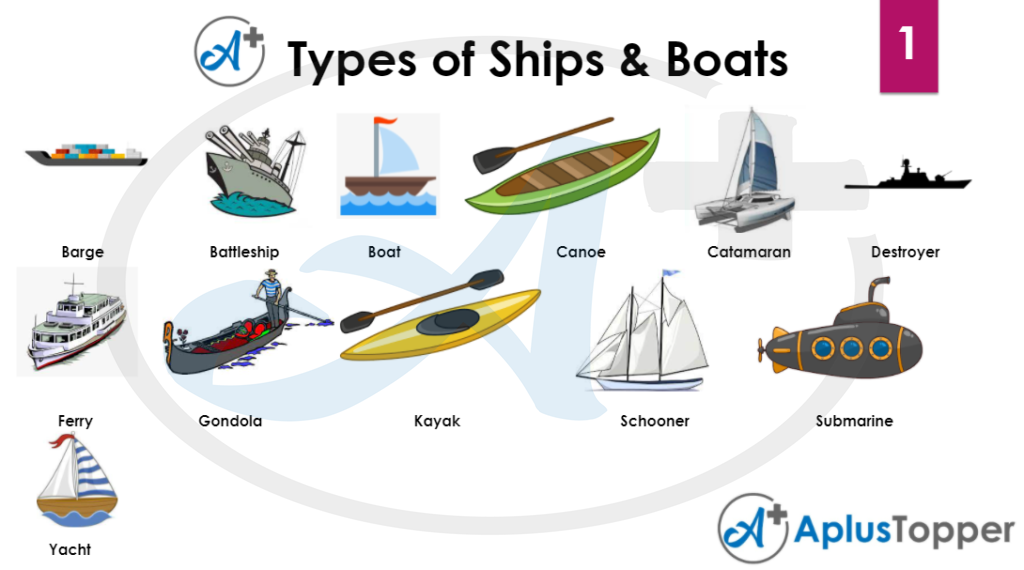 The barge is a long flat bottomed boat for carrying heavy goods on river and canal.

A battleship is a large warship with a main battery consisting of large guns it is used in the naval welfare.

The boats are found in waterways such as rivers and lakes.

A canoe is a lightweight narrow Water vessel with both ends open on top there is a space for one or more seated single-bladed paddles used to move the canoe.

A catamaran is a multi-hulled watercraft having two parallel hulls of equal size it is used for day sailing, world cruising and fishing.

A destroyer is a fast, maneuverable, long-endurance warship intended to escort larger vessels in a fleet.

A ferry is a type of ship used to carry persons or things across the water; it is especially used for a short distance and regular service.

A gondola is a type of boat with long flat bottoms. It is used for transporting purposes on the canals. It carries one to six passengers maximum.

Hovercraft is a vehicle capable of traveling on land, water, mud, ice, and other surfaces.

A schooner is a type of sailing boat that has at least two masts. The schooner is mostly used for blockade running and offshore fishing.

The submarine is a watercraft that operates underwater. They are used in militaries to attack enemy ships during wartime.

A trawler is a different type of powerboat. It is designed for traveling long distances and it is used for catching fish with a long net.

A yacht is a sailing or power vessel boat used for racing, pleasure, this boat has accommodation for stay.

Parts of a Car Vocabulary 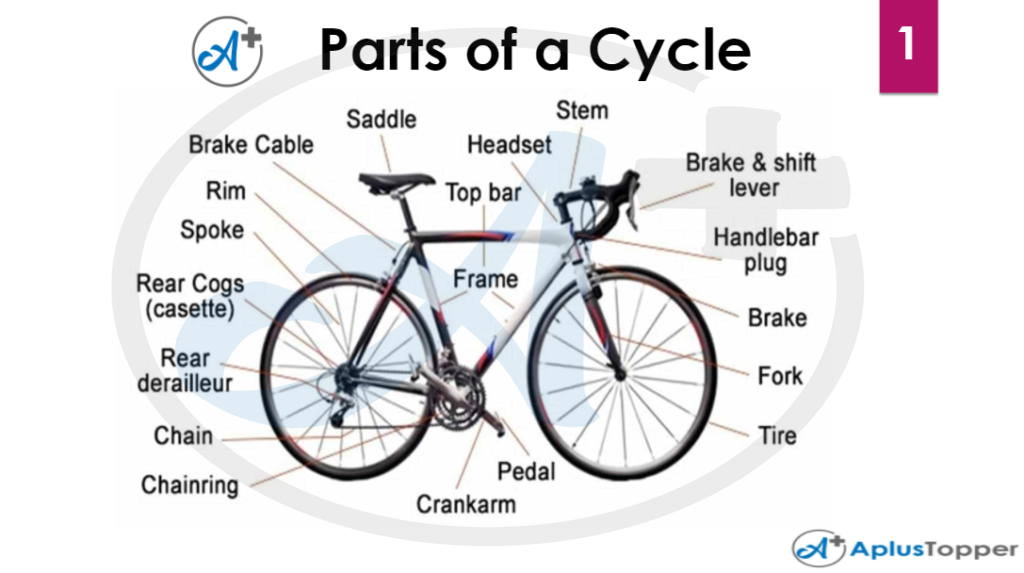 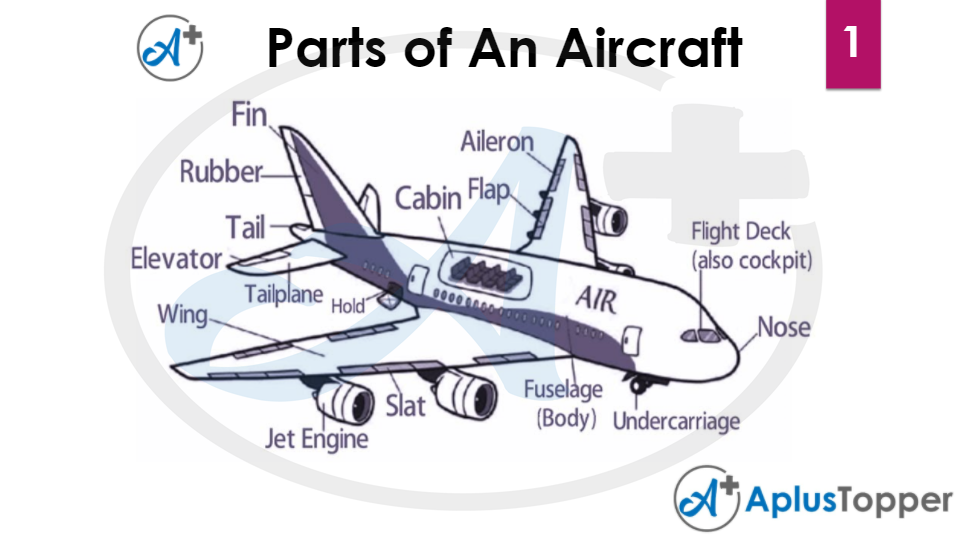 A don’t stop sign is a road sign that is designed to notify drivers not to stop it is safe.

The height limit sign indicates the width of the vehicle, which is allowed to enter the zone beyond its installation.

Length limit sign on road indicates the length of the vehicle, which can be maneuvered through that passage. It limits the load of the vehicle.

A narrow bridge is a diamond shape with line icons in the middle; it is located before a bridge. When drivers are crossing a narrow bridge they should slow down and watch out for oncoming traffic.

No entrance is a sign that indicates you are not allowed to go into a particular area or through a particular door or gate.

No parking sign is used to indicate that no Vehicles are allowed to park on either side of the roads and pedestrians.

No smoking sign is used to indicate that people can prohibit smoking in the area and can be used to enforce no-smoking laws.

No straight ahead is a road sign that is not permitted to continue straight.

One-way traffic or unidirectional traffic is the traffic that moves in a single direction.

Speed limits are used in most countries to set the maximum speed that vehicles may travel on a road.

Traffic lights are three colors they are red, green, yellow. The red indicates to shop the vehicles, yellow is ready to start vehicles and green is to go Vehicles.

Traffic signals ahead sign indicates that the vehicle has to be slowed down and be prepared to come to a complete stop on a red signal.

Turn left is a traffic sign that is marked on the roads. You are only allowed to travel in the direction the arrow is pointing to the left.

Turn right is a traffic sign that is marked on the roads. You are only allowed to travel in the direction the arrow is pointing to the right.

A U-turn sign is a turn in the road to go in the opposite direction. The sign is white with a black arrow that crosses out in red.

Uneven road signs are used to alert the drivers from the damaged roads. The sign can only be used temporarily for the construction of roads.

Weight limit prevents the deterioration of your roads by clearly establishing and marking maximum weight limits.