Transport In India Essay: Transportation systems are indispensable to any country’s progress. Without proper means of transport, the raw materials can’t be transported to industries, agricultural harvest cannot reach city godowns and finished goods can’t be deposited in markets. People also can’t commute to their place of work or study.

“Transportation system is the lifeline of any country.”

Long Essay on Transport In India 500 Words in English

Below we have given a long essay on Transport In India of 500 words is helpful for classes 7, 8, 9 and 10 and Competitive Exam Aspirants. This long essay on the topic is suitable for students of class 7 to class 10, and also for competitive exam aspirants.

The earliest means of transport in history were simply walking and swimming. After animals were domesticated, human beings used them for riding and carrying load. Invention of wheel laid the foundation of the modern transport systems. The steam engine revolutionised rail transport, while the first aircraft designed by Wright Brothers in 1903 gave an impetus to air transport.

In India, a number of transport systems, both obsolete and new, co-exist simultaneously. In Kolkata, hand driven carriages are still prevalent, despite attempts to ban them. Animal transport includejfnse of animals such as donkey, horse, mule, buffalo etc. These are more common in villages. In hilly areas, mule and yak are used to climb to higher altitudes. Road vehicle transport includes bus, auto-rickshaws, taxis, cars, scooters, bikes and bicycles. Well-developed bus services are known to operate only in few Indian cities. Over 80% of road traffic is occupied by personal instead of public transport.

However, with the advent of air-conditioned and low floor buses in most cities, people are preferring to use them, over their personal vehicles. Bengaluru was the first city in India to introduce Volvo buses in 2006 and it is also the first to establish an air-conditioned bus stop. Chennai house is one of Asia’s biggest bus terminus. The oldest Indian state transport system is that of North Bengal State Transport Corporation and is still in operation.

Taxis also run in a number of cities. The older ones used, were the Padmini or Ambassador taxis. In Bengaluru, Hyderabad and Ahmedabad, they are hired through phone, while in Kolkata and Mumbai, they can be rented on the roads. Since 2006, radiotaxis have become quite popular owing to the safety they confer.

Auto-rickshaws or three-wheelers are also common in several cities, like Mumbai, Delhi and Ahmedabad. They may be colour-coded as black or green depending on whether they use petrol or CNG, respectively. Metro rail network is one of the latest introductions in several Indian cities. Kolkata Metro is the oldest metro, followed by the Delhi Metro, which started in 2002. The Namma Metro in Bengaluru is India’s third metro system, which began in 2011.

These metro rails have been highly successful, carrying lakhs of passengers per day. They have not only eased road traffic, but have made travel cheaper, safer and convenient. Directorate General of Civil Aviation (DGCA) is the national body that regulates the aviation industry. Air India plays a major role in connecting India with the world. IGI Airport, Delhi is the busiest airport of India in terms of passenger traffic. 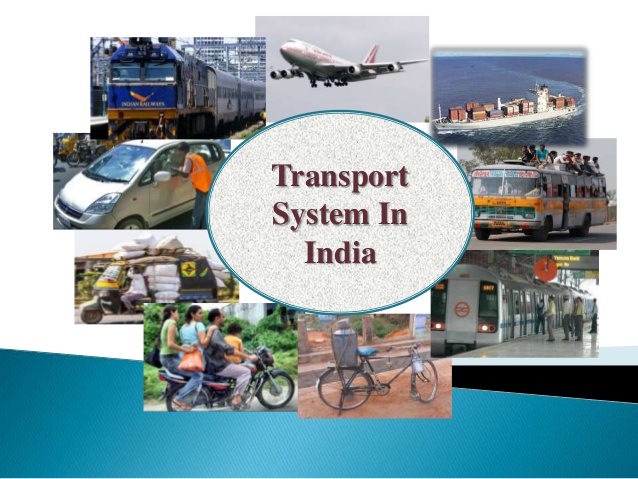 Short Essay on Transport In India 200 Words in English

Below we have given a short essay on Transport In India is for Classes 1, 2, 3, 4, 5, and 6. This short essay on the topic is suitable for students of class 6 and below.

India also has an extensive network of inland waterways in the form of rivers, canals, backwaters and creeks. There are 12 major ports in India. Vishakhapatnam Port is one of the busiest ports on the East Coast of India. Many changes brought about in India’s transport systems of late, guarantee safety for women. These include all women taxis, autos, metro rails, buses and trains. Also, more number of RPF personnel should be deployed at station premises.

Transportation is certainly becoming fuel-efficient with the use of CNG. Delhi was one of the first cities of the world to introduce CNG buses. One area that needs amends is in the friendliness towards the disabled. More vehicles should cater to the needs of handicapped, paralysed and blind people, as they are an integral part of our society.

Pedestrian safety should be ensured. Recently, the ‘Rahgiri’ initiative was launched in Delhi to encourage the habit of walking. Walking and cycling would go a long way in reducing air and noise pollution, and conserve petrol and CNG fuels too. The rail transport was facilitated greatly in Lalu Prasad’s regime as Railway Minister, with the introduction of trains such as Garib Rath for the economically weaker sections of society. Under PM Modi’s leadership, Asia’s highest rail bridge has been constructed between Jammu and Katra. A proposal is also underway for bullet trains between major cities of India.