The Yellow Wallpaper Essay: Written by Charlotte Perkins Gilman, The Yellow Wallpaper is the story of a woman and how she was driven to insanity in the name of a cure or treatment. She was prescribed isolation after the birth of her child in a dilapidated mansion, in a room with bars on the window.

She would only see the torturous yellow wallpaper in her room, thus the name of the story. This wallpaper creeps to her mind slowly, driving her to insanity.

We are providing students with essay samples on a long essay of 500 words and a short essay of 150 words on the topic “The Yellow Wallpaper” for reference.

Long Essay on The Yellow Wallpaper Essay 500 Words in English

Long Essay on The Yellow Wallpaper Essay is usually given to classes 7, 8, 9, and 10.

The yellow wallpaper is a short story depicted on a first-person narrative basis. The story is based on a woman who locks her experiences in journal entries. Her husband, John, is a physician who has decided to rent an ancient mansion.

The unnamed narrator has prescribed isolation; she is not supposed to work or even write. Her only encouragement is to eat well and breathe lungful air. The doctor names her condition as temporary nervous depression, and she also has slight hysterical tendencies.

The initial pages of the journal depict the grandeur of the house. The tone in these sentences is almost romantic, but she also feels that something is off about the entire situation in the house. Her husband belittles her illness and also considers such feelings as her imagination.

Her husband, who is also her doctor, advised her to do nothing, but since she feels that only with diligent work, she might be able to overcome her illness, she begins her journal. It is a secret journal that helps her to provide some relief to her mind. She feels particularly disturbed by the monotonous nature of the yellow wallpaper in her room. Due to her husband’s presence, she starts hiding her journal.

The narrator complains about her control-freak husband and thinks back on her childhood in many occasions. She does not get better over time and gets more fixated on the wallpaper, almost convinced that she can smell the wretched thing all over the house. She is aware of the bizarre pattern and something about the missing patches, the way the colour is smeared all over the skin, rubs her in a wrong way.

Within the main pattern, the narrator realises that she feels the presence of another woman, who is trying with all her might to get out. She feels that the woman creeps around all day. She notices the shaking window bars, and along with the woman, the narrator feels like she is creeping throughout the house too.

Many a time, she feels that her husband is well aware of her obsession. One fine day she decides to tear off all the wallpaper and does half of it during the night. The next day when she is alone, she goes into a state of frenzy and starts to believe that there are a lot of women who are trapped in the walls, and she also believes that she too has come out of the wallpaper. When her husband finally returns, he faints at the horrific sight.

This tale has undergone many interpretations, the feminist one being the most popular. Many critiques believed that the author has tried to portray the male dominance in the society, and the insanity of the narrator is an escape from such bondage. The author has tried to portray that isolation can never be a treatment for mental illness, and many years after the publication of this story, this horrific process came to an end. 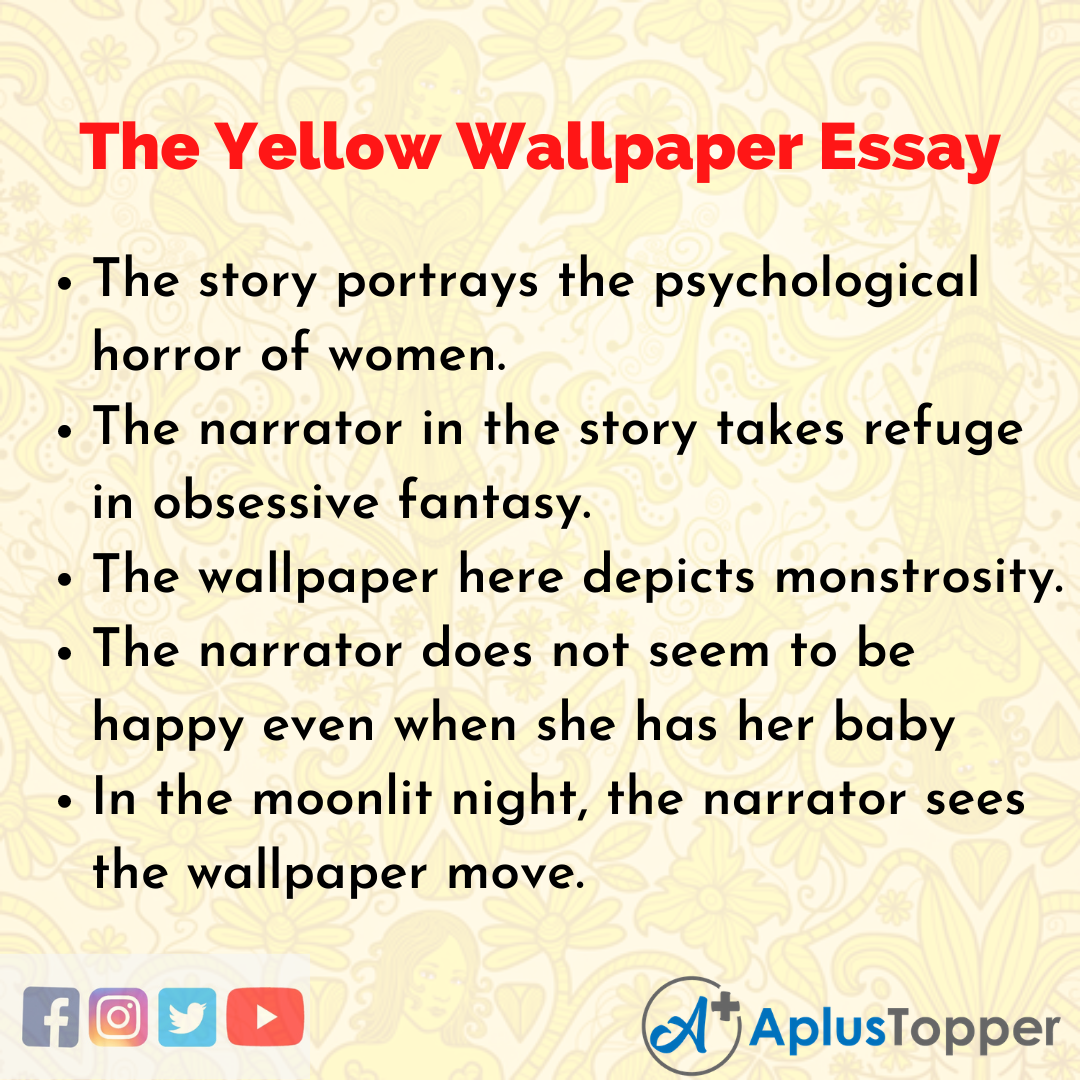 Short Essay on The Yellow Wallpaper Essay 150 Words in English

The short story written by Charlotte Perkins Gilman was published in the year 1892 and has been adapted to a movie of the same name in the year 2011. The main characters in the book are the author herself, who is the narrator, and her husband, John.

John is also the doctor of the narrator, who has prescribed isolation for her. This remedy makes her stick to her room, and by each passing day, she gets more fixated on the yellow wallpaper in her room. Gradually, when she becomes more obsessed with the wallpaper, she thinks that a woman is trapped within it, and she tried to free her. Her obsession reaches to the maximum when she thinks of herself as the trapped woman in the wallpaper.

The main idea of this book is the dominance of men in a marital bond and the evils hidden beneath the idea of ‘resting cure’. She portrays how isolation can lead to insanity.

10 Lines on The Yellow Wallpaper Essay in English

1. The story portrays the psychological horror of women.
2. The narrator in the story takes refuge in obsessive fantasy.
3. The wallpaper here depicts monstrosity.
4. The narrator does not seem to be happy even when she has her baby
5. In the moonlit night, the narrator sees the wallpaper move.
6. The story has a take on male dominance in society.
7. The yellow wallpaper has a more feminist viewpoint.
8. The story was published in the New England Magazine.
9. The author drew attention to the mental health of women.
10. The narrator could smell the colour from the walls. 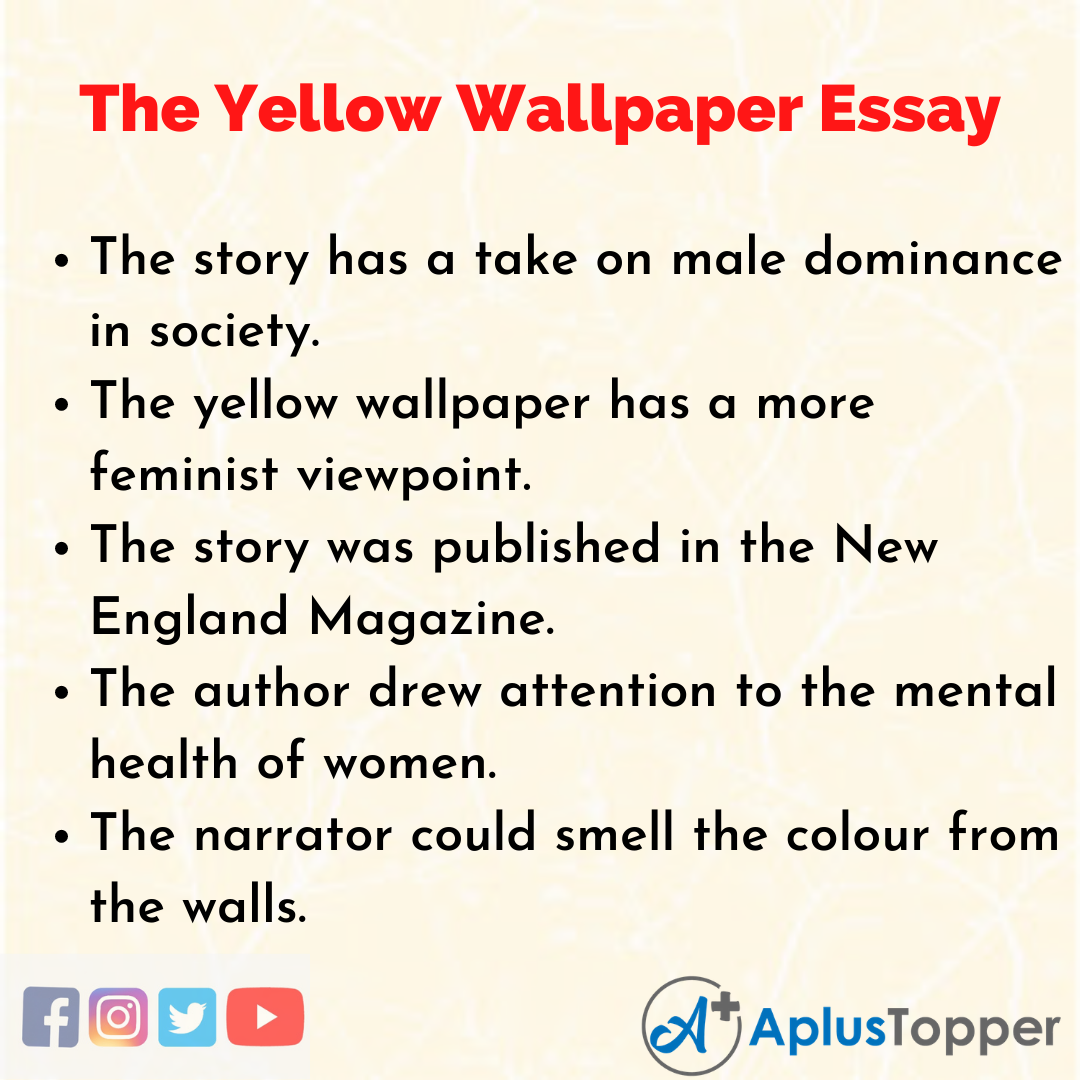 FAQ’s on The Yellow Wallpaper Essay

Question 1.
When was the story published?

Answer:
The yellow wallpaper is a short story that was published in the year 1892. Charlotte Perkins Gilman wrote it

Question 2.
Who is John in the yellow wallpaper?

Answer:
John is the husband of the narrator of the story. He is also a mental health expert who treats the narrator.

Question 3.
What is the genre of the yellow wallpaper?

Answer:
The story is based on a genre of gothic horror, along with some social and political elements.

Question 4.
Where does the story ‘The Yellow Wallpaper’ take place?

Answer:
The backdrop of the story is in America. It takes place in a house, which, in all probability, is an asylum.