The Term Dalit literature English literature Essay: Dalit literature is the literary form that Dalits wrote about their lives for spreading detailed descriptions and information about them. It emerged first in the 1960s in Marathi language and then started reflecting in other Indian languages like Hindi, Telugu, Tamil, Bangla, Kannada, and Punjabi. These appeared in various literary forms like the poems, shorter stories, autobiographies, and others. They stood out, leaving an extraordinary impact as they managed to showcase the Dalits’ reality in Indian society and their stand and situations in the nation.

Dalits suffered from various religious and political discriminations in the Indian society, and the Dalit literature depicts all their sufferings and lives experiences of discrimination and tortures.

We provide children and students with essay samples on a long essay of 500 words and a short essay of 150 words on the topic “The Term Dalit literature English literature” for reference.

Short Essay on The Term Dalit literature English literature is usually given to classes 1, 2, 3, 4, 5, and 6.

Dalit literature is an essential group of literary sources that Indian Dalits created to share their conditions and sufferings with the World. The first and most ancient Dalit literature was Madara Chennaiah, written in the 18th century by a cobbler who lived in Western Chalukyas’s reign. The cobbler (and author of this Dalit literature) is often referred to as the “father of Vachana poetry”. He is also among the poets mentioned in the Dohara Kakkaiah, a Dalit by birth, and six of his confessional poems are still available.

A few experts often trace the origin of Dalit Literature to Buddhist literature, or mainly the Marathi Dalit Bhakti poets like the Karmamela, Chokha Mela, and Gora, and to the Tamil Siddhas or Chittars. Furthermore, the modern Dalit literature and writings emerged as a separate genre after the egalitarian and democratic thinkers like B. R. Ambedkar, Sree Narayana Guru, Jyotiba Phule others began to articulate the modes and sources of caste oppression.

Some prominent experts like Tharu also believed that even though a few Dalit writers are known to have existed in the ancient period, the real originality and force of Dalit literature can only be traced to decades after the late 1960s. During that period, Dalit Panthers (the Ambedkarite social organization) revisited and embraced Babasaheb Ambedkar’s ideas and elaborated their disagreement with the Gandhian mode of Indian Nationalism. Soon, the Dalit writings and literature turned into an all-India phenomenon.

Dalit Literature is known to reformulate the caste system and reassess the colonialism and its need. It also resisted the reduction of caste to class or the non-Brahminism and described the caste power, it’s contemporary working, and then analyzed. Stating the Dalit literature’s importance, Arundhati Roy observed that people in India practice apartheid that is left unnoticed by the other parts of the World. She also confirmed the importance of Dalit literature to share their stories. 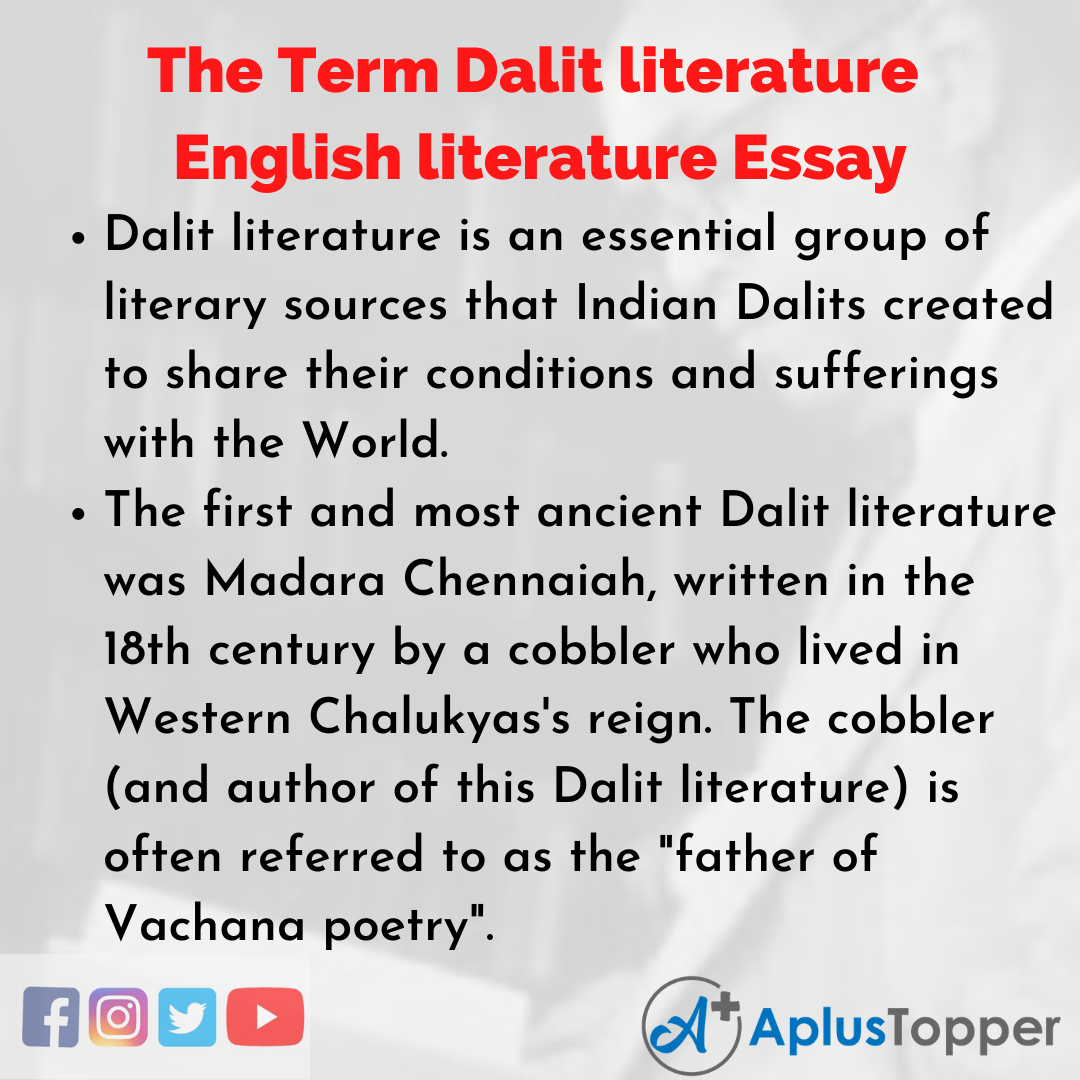 Long Essay on The Term Dalit literature English literature is usually given to classes 7, 8, 9, and 10.

Dalit literature is the literary form of the Dalits and by the Dalits to depict the story and experiences of the Dalits. Although not a new word, the term Dalit is known to be used first in the 1930s as Marathi and Hindi translation of ‘depressed classes’, a term that the British gave for the presently known scheduled castes. In the 1970s, the group Dalit Panthers, the social organisation of Ambedkarite group, revived the term again and expanded the reference to include the scheduled tribes, women, poor peasants, and the others being exploited both economically and politically and also in the name of religious affairs. Thus, Dalit is not the term for a caste. It is the symbol of change and revolution.

The emergence of Modern Dalit Literature began in 1958 when the Maharashtra Dalit Sahitya Sangha led the first conference. Dalit Literature is the mainstream of Indian writing in English or any other Indian regional language. This form of the literary source is about the oppressed classes and caste across India. The tradition of Dalit literature and writing can be traced to the 11th-century writer Cekkilar.

Modern Dalit literature and writings founded on the ideological sights and works of Ambedkar, the Indian constitution’s chief architect. The literature ties reparably to the Dalit liberation movements in various parts of the country. Dalit Literature marked its significant presence in the 1960s initially in Marathi literature and then in Hindi, Tamil and Malayalam. Further, it also emerged in the English language in poems, novels, autobiographies, and short stories from Dalit expression’s significant genres. The Dalit writings eventually emerged as a collective voice questioning through social reality’s articulation of various writing kinds that either made the groups of Indian society visible or distorted their identity.

Traditionally, Dalits were beyond the pale of the caste system or varna system, were initially considered Panchama (the fifth group) beyond the fourfold division of the Indian people. Dalits were earlier not privileged enough to let even their shadow fall on any non-Dalit caste, were considered untouchables, and had the job to sweep the grounds. Dalits were also prohibited from entering the temple or drawing from the same wells as used by other castes and lived in the segregated neighbourhood outside the majority of the societies.

However, not all the members of upper castes or the priests were similar, and a few of them also warmed and greeted the Dalits. A real-life example is of a Hindu Priest Dnyaneshwar who was demoted to the Dalit status in the 13th century and continued to compose the Dnyaneshwari, a commentary literature form the Bhagavad Gita. Another Brahim who was excommunicated was Eknath during the Bhakti period when he fought for the untouchable Dalits’ rights.

There are some examples of prominent Dalit priests, like Chokhamela of 14th century. He also became the first rewarded Dalit poet of India. Then came the earliest historical people who rejected the caste system, and they were Gautama Buddha and Mahavira. Their teachings then became the religions Buddhism and Jainism, respectively. The earliest reforms in the Hinduism happened in the medieval period when Bhakti movement encouraged the inclusion and participation of Dalits in the 19th century. The Arya Samaj, Brahma Samaj, and Ramakrishna mission participated actively in the emancipation of the Dalits.

Dalit literature artistically portrays the sorrows, slavery, tribulations, degradation, poverty, and ridicule endured by the Dalits of Indian society. The Dalit literature and writing were required to pass three phases of consideration from the mainstream literature part: erasure, containment, and assertion. In the introduction of Limbale’s concepts, Alok Mukherjee also stated that Dalit literature witnessed the same isolation from the mainstream literature and writing resources. The entire Hindu caste system of India tried eschewing it at the same time when they utilised it. Indian Dalits were previously not considered the part of the caste system and hold the nationality until the Hindus finally admitted them as the nationalist movement’s part.

Dalit literature also marks the wholesale rejection of tradition, aesthetics, language, and Brahminical literature concerns that used to carry the signs of caste-based cultural and social order for the Indian society. Even after all the isolation, Dalit literature established the tradition with anti-caste and untouchable believers and thinkers like Gautama Buddha, Kabir, Jyotiba Phule, and B. R. Ambedkar.

The main subject of Dalit literature’s content has been the untouchables and the authentic experience and sufferings of Dalits in the Indian society. The expertise in these literary sources is about a single identity, but it means the universality of the collective experience of the entire group. Neither the rasa (evocation if emotions) in the Indian literature nor the preoccupation with Western literary theory’s identity is considered adequate to explain the Dalits’ unalterable experience. Their experience is unalterable as unlike the poor, slaves, and the colonised clans, they cannot reverse their situations if provided with necessary assistance. As Dalits were considered the outcasts, they cannot do anything to change or undo it; they were born in that, and only their death can liberate them from it.

Dalit literature is moreover considered a mimetic one in nature. The authors and writers of Dalit literature and writings use mythic figures from Hindu religious texts like Ekalavya, Shambuka, Shurpanakha, and Ravana, for portraying the current atrocities. On doing so, they were able to spot the continuation of subordination tradition of their kind. Dalit literature is not meant for romanticising anything. They portray the realistic experiences of who the Dalits are. Thus, these literary sources are not pleasing for all types of readers.

Dalit literature is often described to have the purpose of a revolutionary, liberatory, and transformational form. Moreover, apart from the Bhakti poetry of the Dalit literature group, one cannot spot any other source with devotional content among the group. Thus, the Dalit literature does not entertain the more good sentiments and refined gestures; it only expresses the power struggle in a larger establishment. The Dalit movement of Ambedkar was the culmination of an only anti-caste campaign that started far ago in various parts of the Indian society. However, only the emergence of Buddhism and Jainism emerged as the individual religions end the caste system and consider everyone unanimous.

Buddhism emerged during a protest against Hinduism, and mainly its caste system, rituals, and the violence of Vedic sacrifices that it followed. Then appeared the Bhakti movement, and Buddhism’s anti-caste tendency started from the 18th century across South India. The Bhakti period’s prominent poets are Kabir, Chaitanya, Ramananda, Mahaprabhu, Guru Nanak, Meerabai and Kabir Das. They also tried reforming the Hinduism to get rid of the casteism and its stigma. Sikhism also emerged with the Bhakti movement. Buddhism, although died later with the ‘contain all’ move of Hinduism, Ambedkar and his group again went for it as a casteless religion.

Dalits were earlier not even allowed to enter the religious places of the other groups of Indian society. Even though they had their segregated places of worship, the first “upper-caste” temple opened to 1928 to welcome all Dalits. The temple to initiate was the Laxmi temple in Wardha. When it comes to the Hindu society, the status of Dalits associates mainly with their occupation as it was considered an impure one, like the leatherwork, butchering, animal carcasses and waste removal. Dalits also worked as the manual labourers and cleaned the streets, latrines, and sewers, which was considered impure, and due to that, they were deemed untouchable.

However, India enacted and implemented several laws and social activities, aiming to protect and improve the social and economic conditions of the Dalit population. India also elected K. R. Narayana, a Dalit leader as the nation’s president in a democratic manner. However, presently there is no such party and act like the UN touch ability, and even its observance is now considered a criminal offence. Still, even after all the advancement and the end of UN touch ability; there are fewer educational opportunities for Dalits in Kerela. 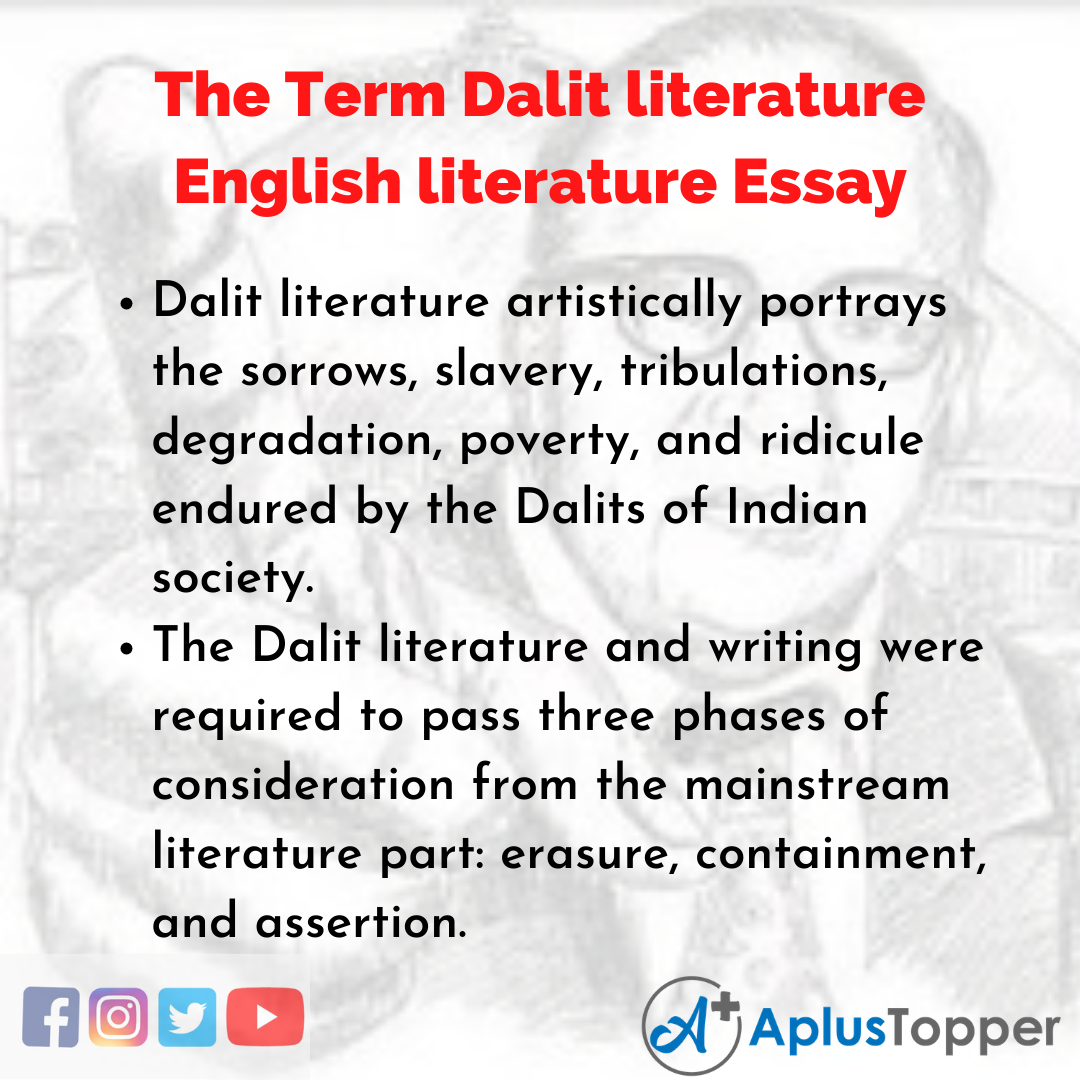