The Tell Tale Heart Essay: The Tell Tale Heart, a brief tale written by the famous Edgar Allen Poe is based on a murder committed by a man. The story is told on a first-person narrative; that is, the murderer himself is the storyteller.

The literature came in the year 1843. The narrator in the story tries his best to convince the audience of his sanity, all the time explaining the brutal murder, he has committed with intrinsic detail.

We are providing students with samples of the article on a long essay of 500 words and a short essay of 150 words on the topic “The Tell Tale Heart” for reference.

Long Essay on the Tell Tale Heart 500 Words in English

In the short story The Tell Tale Heart, the unnamed narrator lives with an older man. The narrator believes that the old man has eyes which are “vulture-like”, a fact that causes perplexity to the narrator. Owing to this tumult of the narrator with his roommate, he plans to murder him. The protagonist insists on being sane on the grounds that he has formulated a detailed and precise plan for murder.

For seven consecutive nights, the narrator tries to shine a light to what he calls the ”evil-eye”. But the older man’s eyes are always closed, which increases the distress of the narrator. On the eighth night, however, the narrator’s hand slips, and he makes a noise to which the older man wakes up. The narrator shines the lantern, and bright light falls into the eyes of the old man, revealing that his eyes are bright open.

The narrator also hears the sound of the beating heart of the elderly man, and his anxiety speeds up. The anxiety reaches such a point that the narrator strikes the poor older man, and dismembers his body, hiding every piece in the loose floorboards.

Even though the narrator tries to conceal all traces of his crime, the neighbours could hear the wails of the elderly man and call the police. On the arrival of the police, the narrator never loses his nerve and makes the policemen sit o chairs that are placed exactly on the spot where the body is hidden. He convinces the police that the scream that the neighbours heard were his own, resulting from a nightmare.

As the narrator is engaged in conversation with the police, he hears a continuous ringing sound that makes him uncomfortable, while the police are oblivious to it. The uneasiness of the narrator grows with the continued ringing, and the narrator grows terrified of it. He is convinced that the police are well aware of both the ringing and the crime he has committed, and are only pretending not to hear the sound. His paranoia grows to such a point that he finally confesses of the murder and reveals the location of the body himself.

Edgar Allan Poe’s works are influenced by the deaths of his closest family members. His works have clear signs of American society during his time. There is a continuous question on the morality and sanity of the narrator because there are no signs of remorse on his part for brutally killing an older man. He is only disturbed because he thinks that the police are aware of his crime and are simply toying with his mind.

The narrator is a calculated killer, as he plans to make as little noise as possible, and he also dismembers the body without spilling a single drop of blood. More than often, madness is the theme of Poe’s stories, and this tale is no exception. The specific motivation for the murder is a clear indication of the insanity of the protagonist, as he confesses that he has no prior feelings of hatred and resentment for the older man. 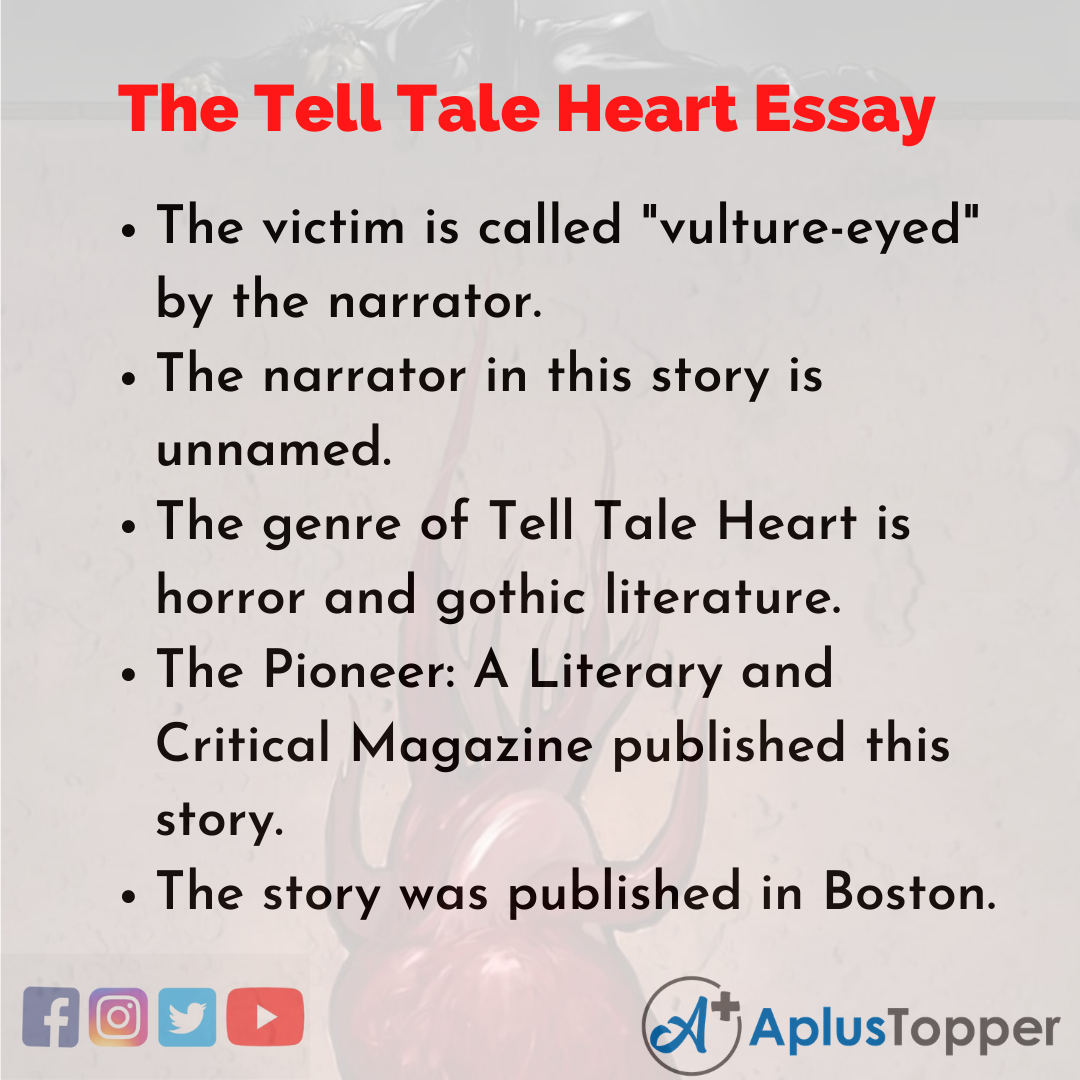 Short Essay on the Tell Tale Heart 150 Words in English

Edgar Allan Poe’s short story The Tell Tale Heart is told from the narrator’s point of view. The narrator puts his heart into convincing the audience that he has not lost his sanity, although he is confessing to a brutal murder. The motivation for the murder is the vexed eye of an old man, with whom the narrator is living.

After killing the poor chap, the narrator puts his body away into pieces to remove all traces of the crime. But finally, when the police arrive, and there is a ringing sound in the apartment, the narrator thinks of the beating heart of the older man. He confesses the crime and shows the body to the police.

The central themes that are covered in this story are confinement and mental health. It is clear that mental illness has the ability to drive a person to a vile act, while confinement leads to a breeding place of devilish ideas.

10 Lines on the Tell Tale Heart in English 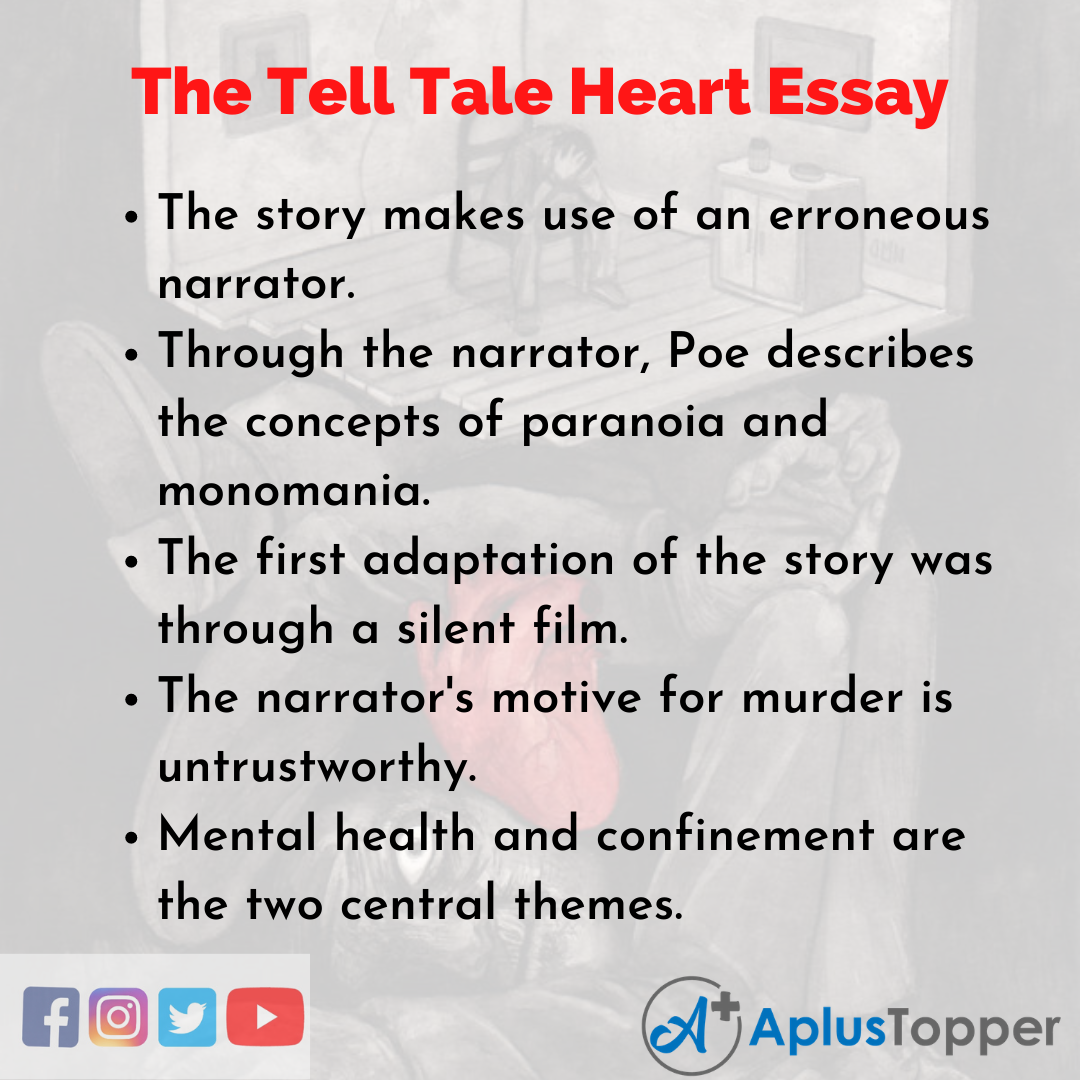 Question 1.
Is there any guilt depicted in the short story?

Answer:
There is no clear evidence of guilt in the story, but it can be assumed that slight guilty feelings led him to acknowledge the crime.

Question 2.
Is the narrator male?

Answer:
There is no clear indication given by Poe if the gender is male or female, and is mostly assumed that it is a male.

Question 3.
Is the narrator insane?

Answer:
There are clear signs of insanity from the narrator, although he tries his best to prove otherwise. The way he commits the murder and the impulse behind it are the indicators.