The Story of an Hour Essay: We will talk through “The Story of an Hour” by Kate Chopin. So the title The Story of an Hour story refers to the form of the text. It is a short story. It’s fictional. But it also relates to the Story that Mrs. Mallard tells herself that being her the Story about her life post her husband’s death is something to look forward to this new beginning, and what we learn is that it’s just a fantasy in the end.

She has a clear and exalted perception, which enables her to dismiss the suggestion as trivial. She realized that her happiness and freedom are much more important than conforming to societal expectations and drowning in grief. The important thing is she positively describes the husband. He’s described as kind, tender and he loved her.

The Story of an Hour that Mrs. Mallard tells herself of this wonderful free new life is incredible. In terms of the noun, Hour is related to the time that passes in this Short Story. Now it wouldn’t take you an hour to read the Story. But it is covering the events that would take an hour.

So what might that link represent the fast and joyful movements of escape that Mrs. Mallard experiences during her marriage? Well, it can be the moment of joy, and she’s ever felt free. Try and link it to Chopin’s message, which is really about marriage. It’s not about Mrs. Mallard and whether she’s a good person, and it’s certainly not about her husband and whether he’s a good person.

She’s trying to say that marriage in itself, regardless of who’s being married, is very difficult for those within it to enjoy life because it forces them to confirm certain expectations. So initially, a very fragile woman Mrs. Mallard has heart trouble. So she is physically weak. She is in poor health, and that foreshadows the end of the short Story, she dies.

But you could also further this interpretation by suggesting that this is a metaphor potentially for her unhappy marriage. And again, this is not specific to this marriage. Chopin tries to criticize marriage in general. So it’s not just Mrs. Mallard and her husband that are unhappy morally. Chopin is also indulged in arguing that many people would be.

Josephine, her sister, and Richard, her husband’s friend, speak to her with great care. They speak to her gently in broken sentences and veiled hints. So they’re very careful in breaking the news to her of her husband’s death. So they are very protected or protective of her. They’re very sensitive to the fact that she’s in poor health. But one can say Telly views the same way Mrs.Mallard views women. Women were seen at this point in the late 1800s as the weaker gender. And they expect that she won’t be able to handle this news and she’s about to surprise them and us.

She isn’t like the stereotypical woman who did not hear the Story as many women have heard the same, and in contrast to the typical woman who would be paralyzed and unable to accept that her husband had gone. She weeps at once. So what that does show at least is that she was upset.

She didn’t love her husband; instead hated him, and she felt quite happy about the situation. It’s not that simple; she does feel upset. Moreover, she weeps at once. Her grief is described as a storm, so this way, as a metaphor. It might suggest her grief is short-lived, just like a storm that will eventually end, and we will move past it. She will move past this grief and get over her husband’s death. She also insists on being alone, which is in contrast to the expectations of what a woman would be like if she was seen as weaker and, therefore, incredibly dependent on men. 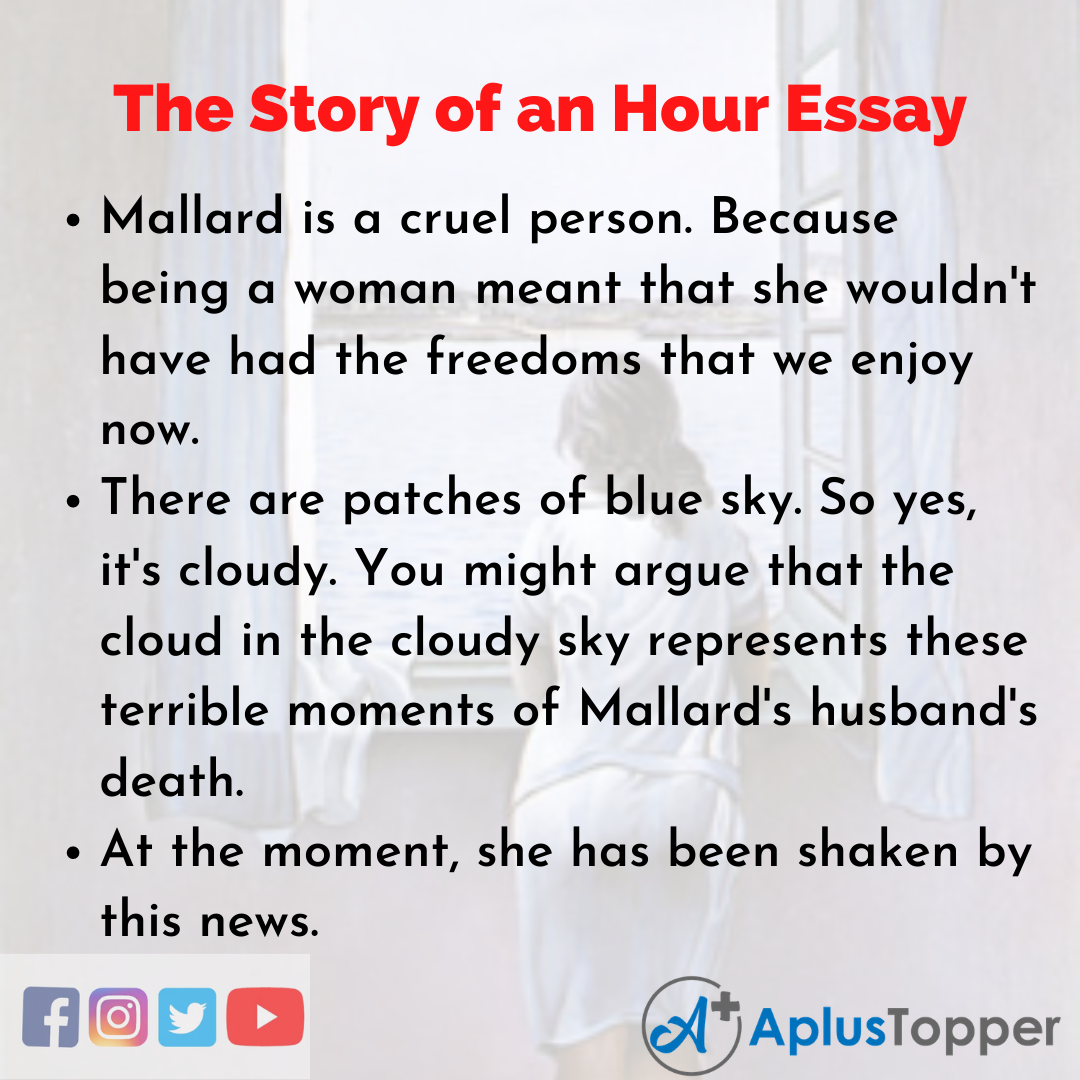 The Story of an hour resembles Mrs. Mallard, who has the freedom of her husband’s death and the way everything happens. A woman would only gain rights to her property through widowhood. So this is the only way that she would gain some autonomy in her life is through her husband’s death. She was happy because he was horrible to her and the fact that he wasn’t turning their attention to marriage itself rather than this particular relationship. And Chopin encourages questioning the nature of marriage.

How can it be oppressive for both men and women? Even though she thinks that she will weep again, and she thinks about how wonderful her husband was. She did love him. That’s very quickly contrasted with these monosyllables. This blunt tone is the fact that he’s going to be fixed and gray and dead. And there’s something quite blunt and harsh really about this, the kind of harsh truth of his death.

10 Lines on The Story of an Hour Essay in English

1. Mallard is a cruel person. Because being a woman meant that she wouldn’t have had the freedoms that we enjoy now.
2. There are patches of blue sky. So yes, it’s cloudy. You might argue that the cloud in the cloudy sky represents these terrible moments of Mallard’s husband’s death.
3. She also is facing the west. What happens in the west the sunsets. It’s the end of the day. So it represents or symbolizes the end of one life for her that being her married life.
4. She is upset, and her emotions take over her. Her crying is personified. She’s not in control of her emotions at the moment of her husband’s death.
5. At the moment, she has been shaken by this news.
6. What Chopin is trying to say, and that’s she has that bespoke repression. So again, does that link to this restrictive nature of marriage.
7. Women were expected to stay in the home, they didn’t have control over the property, and they could not earn their own money and were expected to be dependent on their husbands. But then she starts to sense some feeling.
8. She doesn’t quite know what it is.
9. She’s not really in control of this feeling of joy and excitement. She’s almost overwhelmed by it. She finally realizes and recognizes what she’s feeling and her reaction.
10. Mallard strives to beat it back with her will. So early a metaphor. FAQ’s on The Story of an Hour Essay

Question 1.
After her husband’s death, then she starts changing to sense some feeling. What is it?

Answer:
That feeling is a sense of joy and freedom

Question 2.
What does a husband’s death mean to her?

Answer:
It means that she is free. The repetition of free emphasizes the repressive nature of marriage.

Question 3.
What happens and how does it change after her husband’s death?

Answer:
Her pulse beat fast, and the coursing blood warmed her body, which is a real contrast to the fragile imaged woman at the beginning of the Short Story.

Question 4.
What is the disease she suffered from?