This novel is based on the author’s own experiences and retells one particular year of her own life. The span that is narrated belongs to her adolescence period as she starts to experience the complexities of life.

We are providing students with samples of essay on a long essay of 500 words and a short essay of 150 words on the topic “The House On The Mango Street” for reference.

The House On The Mango Street is a novel which depicts a tale that goes through a mixture of emotions from joy to heartbreak; this novel covers it all. It is the story of a Latina girl who has started experiencing the realities offered by life. She goes through a rollercoaster of events throughout this entire span of one year. There are several themes covered in this novel. Sensitive topics like sexual harassment, racism, and even domestic violence are expressed with utmost maturity.

Esperanza is the narrator of this story, who lives in the Mango street with her parents and three siblings. The opening of the story takes place with Esperanza retelling the story of how they arrived in the particular street to live. Their new home is small and run-down, but before settling there, they moved around a lot. The dream of the family is to have a house of their own, but although the house on the Mango street is their own, it is far from the house of their dreams. Although the parents could overcome their initial dejection of the house, Esperanza is not content and expresses her contempt with the house.

The novel depicts the journey of the little girl as she matures into a lady. Esperanza befriends Rachel and Lucy, and together they have many adventures. She grows conscious of the eyes of the men around her and more than often finds herself to be sexually vulnerable. She encounters her first experience with sexual assault when an older male kisses her.

Esperanza encounters the world of adulthood when she finds sexual maturity and the deaths of two of her family members. Esperanza also befriends Sally, who is far mature than her or Lucy or Rachel. Sally is a girl who is abused by her father and finds her escape in other boys and men. Her friendship with Esperanza is put to stake when she leaves her alone with an unknown group of men. This group assaults Esperanza, which leaves her traumatized to the extent that she decides to leave Mango Street for good.

Once she makes her decision she realizes that even though she can leave the neighbourhood physically, Esperanza will never be able to leave it mentally; this is only because of the connections she has with the other women of the street. She decides otherwise, and stays in the neighbourhood and finally finds her solace in writing.

The House On The Mango Street is a hard-hitting tale of gender inequality and sexual abuse. Each woman in the novel has undergone different forms of abuse; be is Sally or the narrator herself. Such abuses have proved to be the catalyst of their character development.

The character of Esperanza depicts the results of sexual abuse while the characters of Minerva, Esperanza’s mother and Sally depict domestic violence. Marin, on the one hand, defines the burden that is put on the young shoulders and how that proves to be shackled in one’s legs, and Rafaela is a victim of oppression. 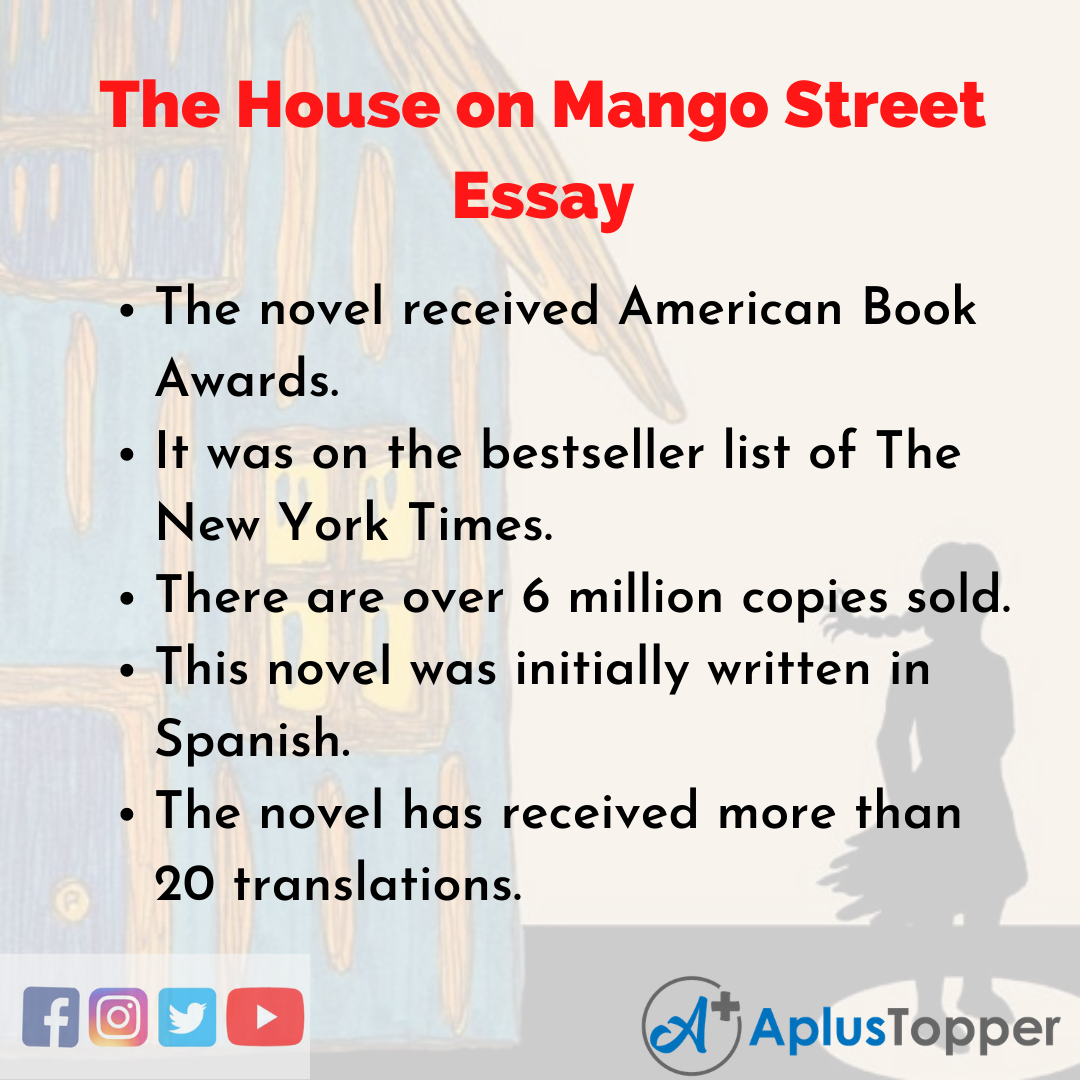 The novel, written by Sandra Cisneros tells the story of Esperanza and the women around her who live in Mango Street. The novel depicts the themes of domestic violence, sexual abuse, gender inequalities the burden that is put on the women from a very young age.

The narrator Esperanza’s journey is full of ups and downs, joy and sadness. The novel tells the story of her life as she grows from a girl to a lady and the friends she makes along this journey. The different women in this novel depict different forms of torment; Sally, Esperanza’s friend, and Minerva, her mother, are victims of domestic abuse. Esperanza herself goes through sexual abuses. This novel s a unique take on the life of women in the 1980s.

The novel went through several praises and harsh critics. The movie adaptation of it went through numerous censorships but has also received several renowned awards. It is indeed a definite read for many readers.

10 Lines on the House on Mango Street in English 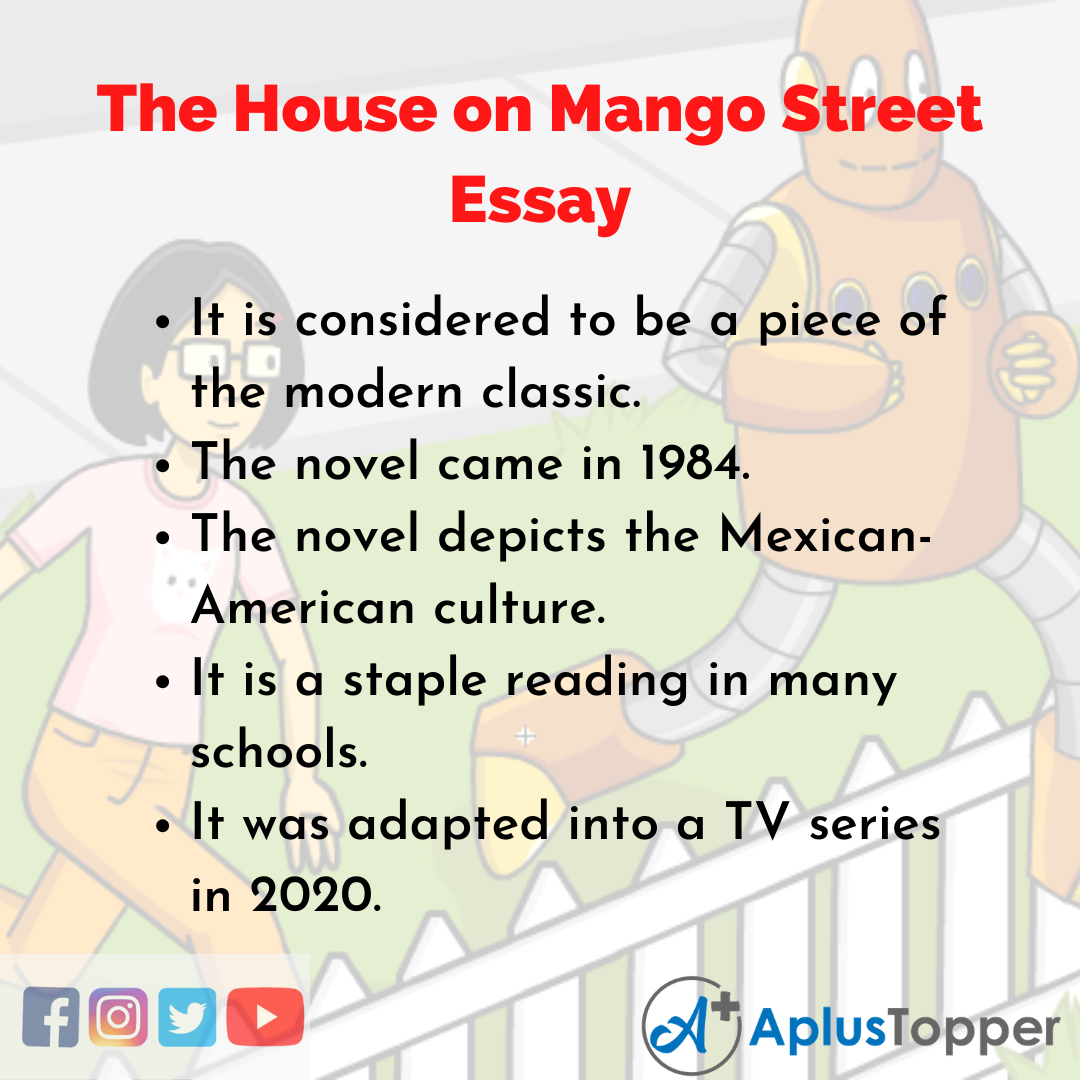 FAQ’s on the House on Mango Street Essay

Question 1.
What are the main themes in the novel by Sandra Cisneros?

Question 2.
Is the novel an autobiography?

Answer:
No, the novel of “The House on the Mango Street” is not an autobiography, but depicts one particular year of Cisneros’s life.

Question 3.
How old is Esperanza?

Answer:
Esperanza, who is the narrator, is almost twelve years of age when the story begins.

Question 4.
What are the names of Esperanza’s siblings?