F Scott Fitzgerald, through his most popular literary piece- The Great Gatsby, gives a vivid peek into the interrelations among the born rich, earned rich and the poor people of the society. The great American dream of the said time makes the readers question if materialism is power?

We are providing a long essay on The Great Gatsbyof 500 words and a short essay of 150 words on the same topic along with ten lines about the topic to help readers.

Long Essay on The Great Gatsby 500 Words in English

The Great Gatsby is a critically acclaimed classic American novel. The author of the book is F Scott Fitzgerald. This is the author’s most popular book that has the honour of many elite references in societal strata. The other works of F Scott Fitzgerald include the romantic egotist, this side of paradise, the beautiful and damned, tender is the night and the love of the last tycoon.

The Great Gatsby is set up in the 1920s. The ambience created by the story is set up in America of the post-war economic evolution. The story is in the form of a narration. The narrator is Nick Carraway, who has returned from his long stay in the East. He is a born, rich character who inherited wealth from his ancestors.

Jay Gatsby is Nick’s neighbour. Nick watches the lavish parities Jay Gatsby hosts every evening but attends one of the party after Jay invited him. The lavish parties at Mr Gatsby’s place depict how carefree the American lives were in the time that led them to attend strange parties with strange people. The fact that Mr Gatsby hosts parties every evening tells us the tale of an American Dream.

Mr Gatsby has an unforgettable past that decays his will to live irrespective of his wealth and luxuries. This character building by the author tells us how materialism can never dominate desire.

The other important characters of the story are Tom Buchanan and Daisy Buchanan. They are related to Nick Carraway and very mysteriously acquainted with Mr Gatsby. It is with the help of these characters that the author brings the vivid picture of the American society in the 1920s.

Many readers have critically acclaimed the Great Gatsby but absorbingly praised by more of them. It is called as the best American novel that showcases America in its raw and naked form. This is why the title of an American dream is synonymously is used as a theme for the story.

The reason for it being called an American dream is that it shows the perfect picture of the society of America where wealth was every soul only dreams and materialistic possesions attracted elite attention. The story is very simple if you might incept but highly impactful with the reason of true possessions of life.

The Great Gatsby has been adapted into cinema many times because of its extraordinary interpretation. The most recent adaptation was in 2013, with Baz Luhrmann and Leonardo Decaprio as the directors and screenplay writers. Leonardo was also the lead in the movie as the character of Jay Gatsby.

The book has an impactful ending where the readers can witness how the past curbs the future and how the future is nothing but a result of past aspirations. 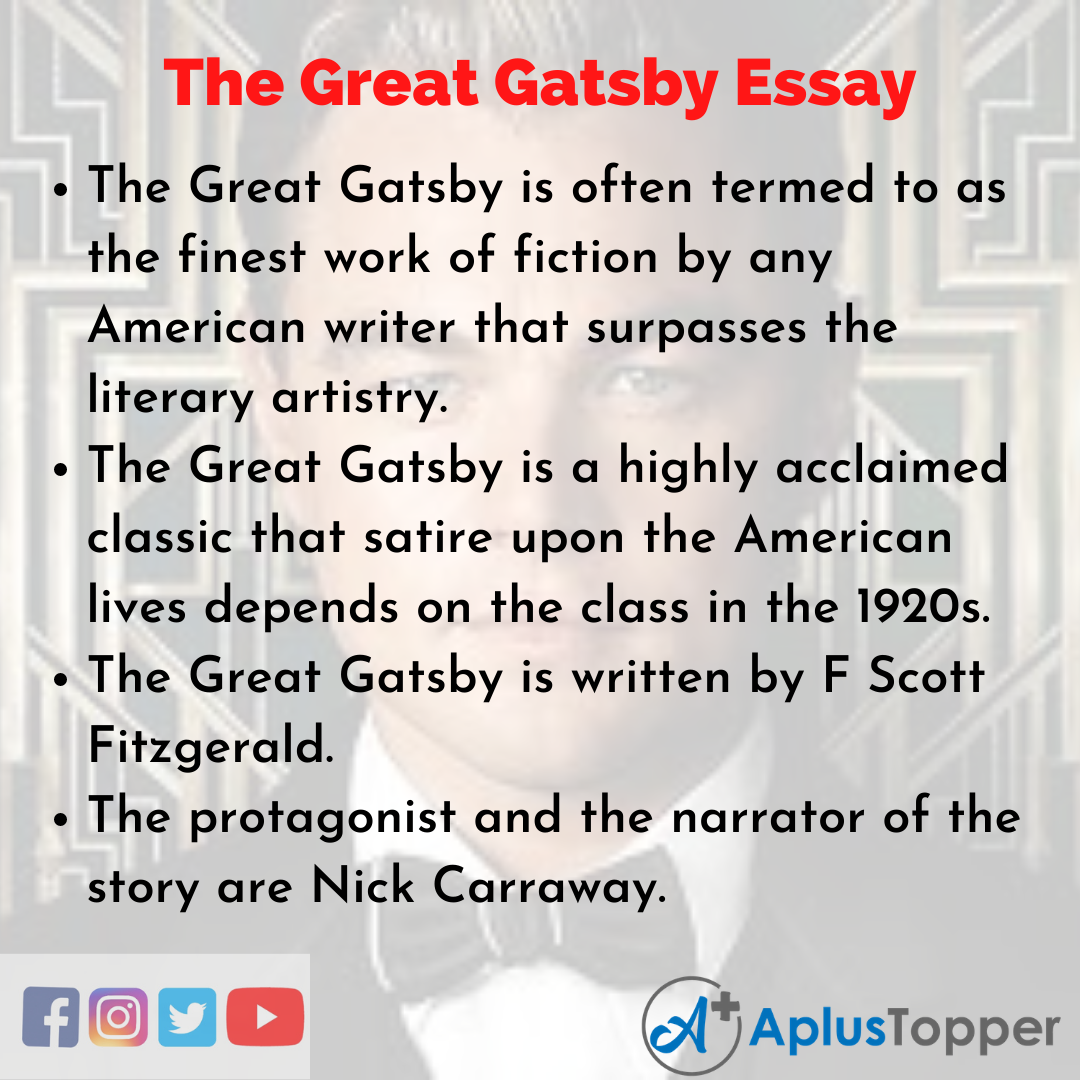 Short Essay on The Great Gatsby 150 Words in English

The Great Gatsby is a highly acclaimed, sometimes referred to as the Best American novel of all times. The story is a vivid peek into the agreeable society of America in the 1920s. The magic of power, wealth, desire, betrayal and discontentment, all teams up to present the ideals of materialism that rules the society but fails to bestow gratification. This clear depiction of the societal stratification is anticipated by the three classes of American society- the rich, the poor and the earned rich.

The three classes, in the novel, have interrelated themselves by contentious association. The get-together events among the classes and within the classes are an interpretation of the things that make up the nonchalant American life in the early 20th Century.

The story has Jay Gatsby as the protagonist, and Nick Carraway, Daisy Buchanan as the other important characters who shape up the story and their actions proceed to the pithy climax of the story.

10 Lines on The Great Gatsby Essay in English

1. The Great Gatsby is often termed to as the finest work of fiction by any American writer that surpasses the literary artistry.
2. The Great Gatsby is a highly acclaimed classic that satire upon the American lives depends on the class in the 1920s.
3. The Great Gatsby is written by F Scott Fitzgerald.
4. The protagonist and the narrator of the story are Nick Carraway.
5. Nick caraway’s proportional evolution from the initiation to the end turns out to be worthwhile in the context of the story.
6. The story mostly revolves around Jay Gatsby.
7. Jay Gatsby is a self-made man who has earned enough money to host lavish parties every night.
8. The other important characters are Tom Buchanan and Daisy Buchanan.
9. The societal stratification of the said time is perhaps the central theme of the story.
10. The other themes include the conflict between power, wealth, betrayal, desire, carelessness and discontentment, that pack up the complete meaning of The Great Gatsby. 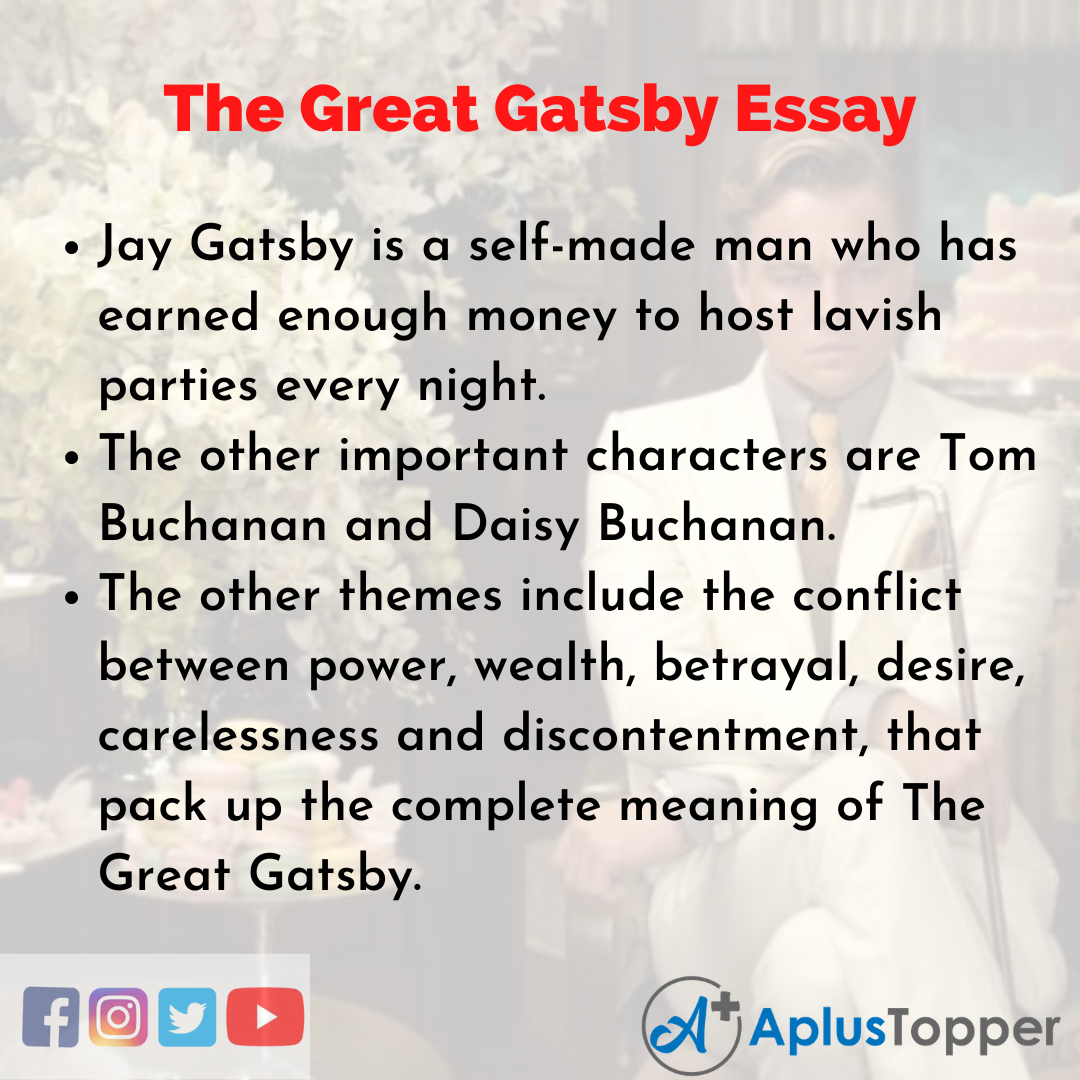 FAQ’s on The Great Gatsby Essay

Question 1.
When is the story of The Great Gatsby set up?

Answer:
The Great Gatsby is set up in the early 1920s, post-war economic growth era. The venue of the story is a nonchalant American society.

Question 2.
Does The Great Gatsby have a prequel and a sequel?

Answer:
No. The Great Gatsby does not have any prequel or sequel. The story is limited to one volume and is certainly the most factiously impactful American story.

Question 3.
What happens to Jay Gatsby in the end?

Answer:
The story revolves around Jay Gatsby and his lavish guff parties. The story proceeds to give us a vivid picture of what jay Gatsby is and what he wants. His character leads to an abrupt end of Gatsby but a very meaning end of the story.

Question 4.
What should be the literary level for me to read The Great Gatsby?

Answer:
You do not need to have a literary standard to read The Great Gatsby. It’s a fine novel in easy words which can be read and understood by anyone.