The memoir received several awards and has been translated to over 20 languages. In 2017, the book was acclimated to a movie of the same name, where the Brie Larson played the young author.

We are providing students with essay samples on a long essay of 500 words and a short essay of 150 words on the topic “The Glass Castle” for reference.

Long Essay on the Glass Castle 500 Words in English

The memoir begins with the childhood of the author Jeannette Walls. She lives with her mother Rose Mary Wells, and father, Rex Walls. She also has an older sister Lori, Maureen, who is her younger sister and Brian, her younger brother.

The main thing that comes in the way of the family from gathering wealth is their alcoholic father. Whenever Rex gathers a good sum of money, he spends it on buying hard drinks. He also unleashes his frustration and anger towards the family and breaks the meagre things they possess.

Such behaviour might give hints to the readers that Rex does not love his family. But in reality, when the man has sobered enough, he showers all his love towards his wife and children. Rex greatly fails at meeting the requirements of the family due to his lack of responsibility sense. He is unjust towards his family most of the times. His irresponsibility shows when he loses his job in Nevada due to lack of punctuality.

The memoir shows the stubborn nature of the author’s parents and depicts how hard good parenting is. They survive like nomads. When the family, rather the siblings face problems from the local boys, it is Lori who picks up a pistol when they are attacked. Knowing that the kids might be snatched away from the family, Rex and Rose Mary decide to escape to Phoenix in Arizona with them.

They move to their big house, which Rose Mary inherited from her mother. She also inherited some money, which sadly, is quick to disappear. It is not that Rex never tried to overcome his drinking problem. When asked to quit drinking by Jeannette for her 10th birthday, he sincerely tries. When the money runs short again, they move to West Virginia, to a town called Welch.

Here the siblings are enrolled in school for the very first time, but they face molestation. The other kids continuously bully them. They move again to a run-down house when the family comes to know Rex’s dream of a glass castle. While Rex is addicted to drinking, Rose Mary is addicted to art. Art is surely something to fall for when you have food in your belly. Rose Mary is quick to quit her teaching job to follow her art dreams, which leaves the family with no stable source of income.

The siblings are greatly disappointed by this choice and take a courageous decision to move out from their parents’ shadow finally. After many hardships, they move to New York, where the Walls siblings go to college and receive a proper education. A few years later, their parents call them to explain that they want to be with their children. But no matter how hard they try, everything seems to be far away from help. Eventually, Rex and Rose Mary are banned by their children. When the family finally meets, years later, it is on the occasion of Thanksgiving, and they toast to Rex’s name who has recently passed away. 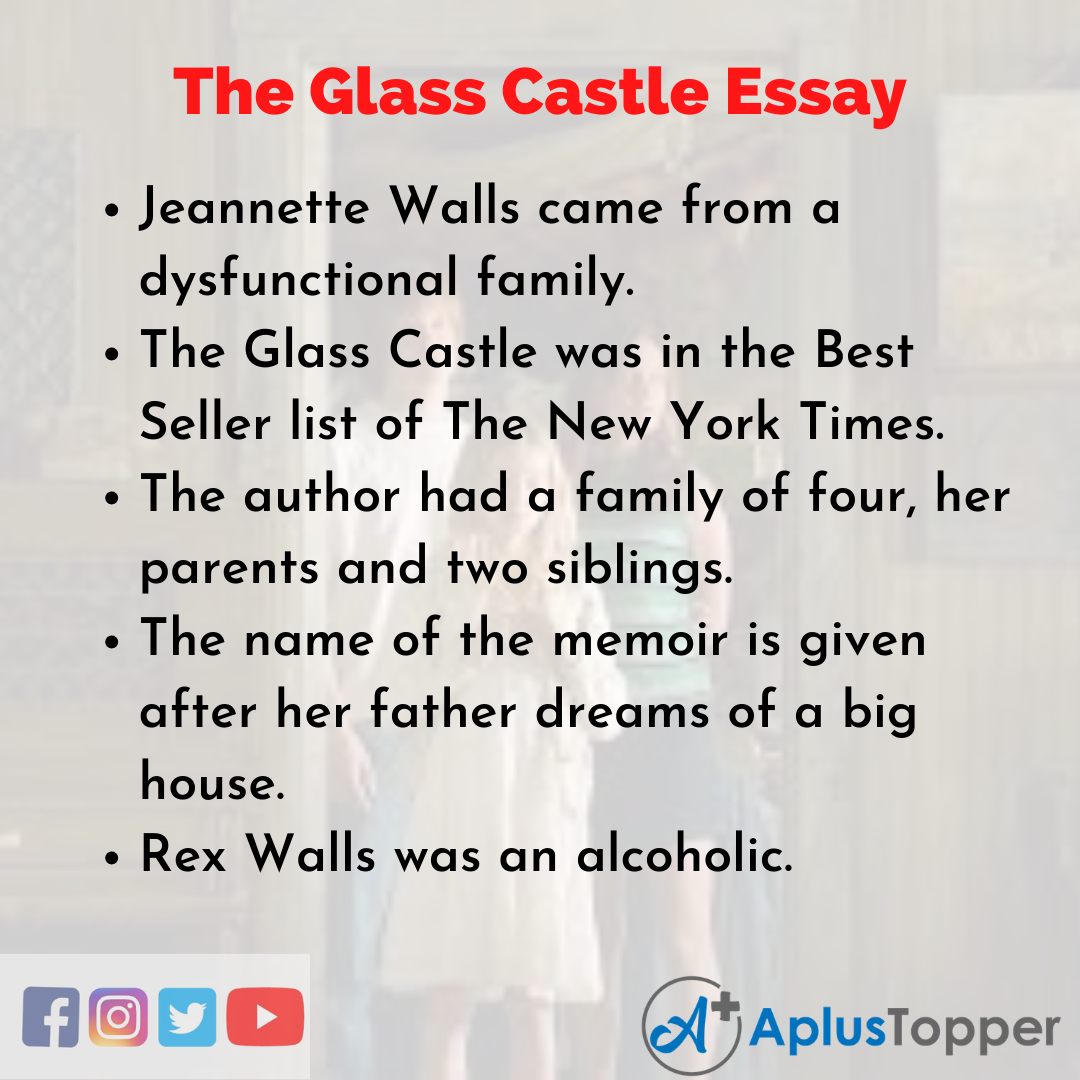 Short Essay on the Glass Castle 150 Words in English

The Glass Castle tells the story of Jeannette Walls’ family. It is a memoir, that shows the hardships and poverty that the author was undergone. Some hardships were life’s offerings, while some others were due to the addiction of their parents to alcohol and art.

But no matter how hard her parents made her life, Walls had always spoken about them with deep affection. While it is a general thought of many that poverty is always tragic and ruins life, the memoir shows poverty in a brighter light. It has depicted how poverty can bring positivity to one’s life too. Jeannette was so brave and resilient and had the guts to move away from their dysfunctional family because that is what poverty had taught them to be. The memoir had all elements of happiness and sadness. It shows how hard parenting can be. It shows the love of a father on one side, his alcoholism and his dreams on the other.

10 Lines on the Glass Castle in English 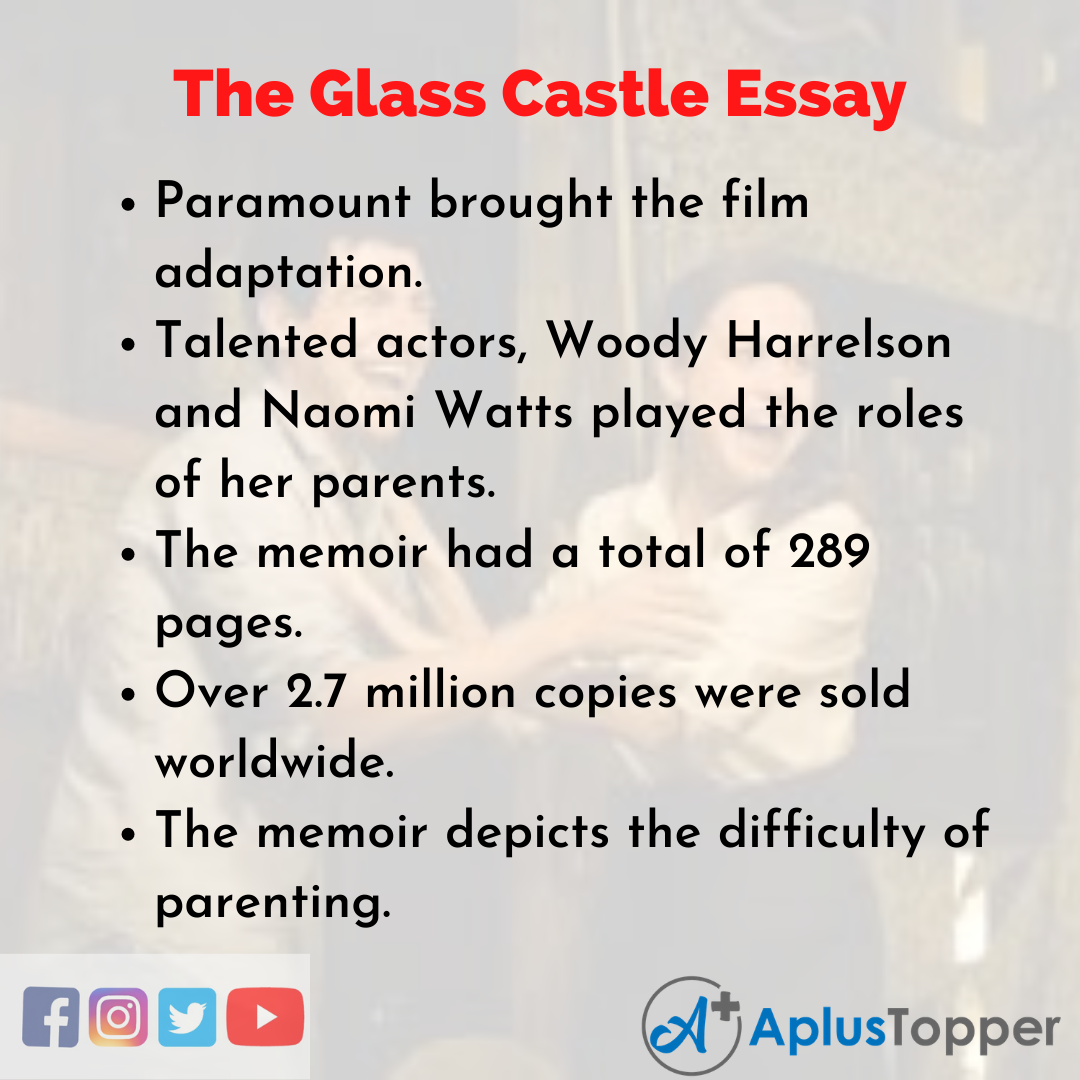 FAQ’s on the Glass Castle Essay

Question 1.
Can the book be remembered?

Answer:
There are so many moments in the book, which are unforgettable, especially the moment when the siblings decide to move away from their parents.

Question 2.
Who acted in the movie?

Question 3.
What are the parents of Jeannette Walls like?

Answer:
Her father is told to be an irresponsible alcoholic, and her mother is not much different. But it is also told that they love their children dearly.