The Crucible Essay: The Crucible is a play written by the American playwright Arthur Miller. It was written in the year 1953 and has since been adapted into films by eminent film directors and screenwriters. This play is a slightly dramatized and fictional rendition of the 1692-93 Salem witch trials of Massachusetts Bay Colony.

The Salem witch trials were a series of hearings which centred around the accusation of witchcraft on more than two hundred people. Miller, in his play “The Crucible” brings about an allegorical comparison between McCarthyism, the communist hunt in the US during the Red Scare and the witch hunt of Salem.

We are providing students with essay samples on a long essay of 500 words and a short essay of 150 words on the topic “The Crucible”.

Long Essay on The Crucible 500 Words in English

The play “The Crucible” is set in Salem, Massachusetts in the year 1692. The play begins in the setting of a house which belongs to Reverend Parris, where his daughter Betty lies unconscious and ill.

The previous night, Reverend Parris had seen his daughter Betty, niece Abigail and his black slave Tituba, dancing in the woods naked when suddenly Betty fainted. The physician cannot determine the cause of this illness. Soon the Putnams report a similar illness in their daughter Ruth. Reverend Parris, sure of some witchcraft at work calls Reverend John Hale to investigate the matter.

Abigail asks all the other girls involved in this act of trying to conjure a curse on Elizabeth Proctor to admit that they were only dancing in the woods and doing nothing more. Soon it is revealed that Abigail’s love for Elizabeth Proctor’s husband John proctor was the reason for her reassortment to witchcraft. A sudden scream from Betty makes the villagers assume that it was the psalm sung downstairs that made her uncomfortable.

Everyone started blaming witchcraft for these sudden unnatural incidents. On the investigation of Reverend Hale, Tituba is forced to falsely claim the work of the devil, and her along with Abigail and Betty go on accusing other girls of witchcraft.

Eight days later, John and Elizabeth are discussing the accusations in their home when Mary, their servant, brings the news that Elizabeth herself, has been accused of witchcraft. Reverend Hale arrives and admits his scepticism on the Proctor’s belief in Christianity since they do not go to church regularly and of their children is not baptized.

Soon Giles Corey and Francis Nurse enter the Proctor household informing them, and both their wives Martha and Corey and Rebecca Nurse have been imprisoned. Soon Elizabeth is also taken away by the authorities. Extremely angry John orders Mary to expose Abigail and others and agreed to disrupt his public image and speak about his relations with Abigail.

John takes Mary to court to testify Abigail as a fraud. Proctor admits his adultery with Abigail and claims that to be the reason for these faulty accusations. To testify Proctor’s claim, Danforth calls Elizabeth, but she denies her husband’s relations to save his honour. Seizing the opportunity Abigail and the other girls claim Mary to be attacking them with evil spirits. Coming under pressure Mary sides with Abigail and calls out Proctor as the devil’s companion. Proctor is arrested and scheduled to hang.

Meanwhile, riots furnish in nearby towns, and Abigail runs away. Parris and Hale are aware of Proctor’s innocence and asks him to confess to save himself from the punishment. Elizabeth is pardoned for being pregnant with a child. John writes a confession but refuses to sign it for his name is all that he has left. He refuses to sacrifice his dignity and tears up the confession. John Proctor meets his horrific end despite being innocent. However, his wife Elizabeth says he has gotten his “goodness” back. 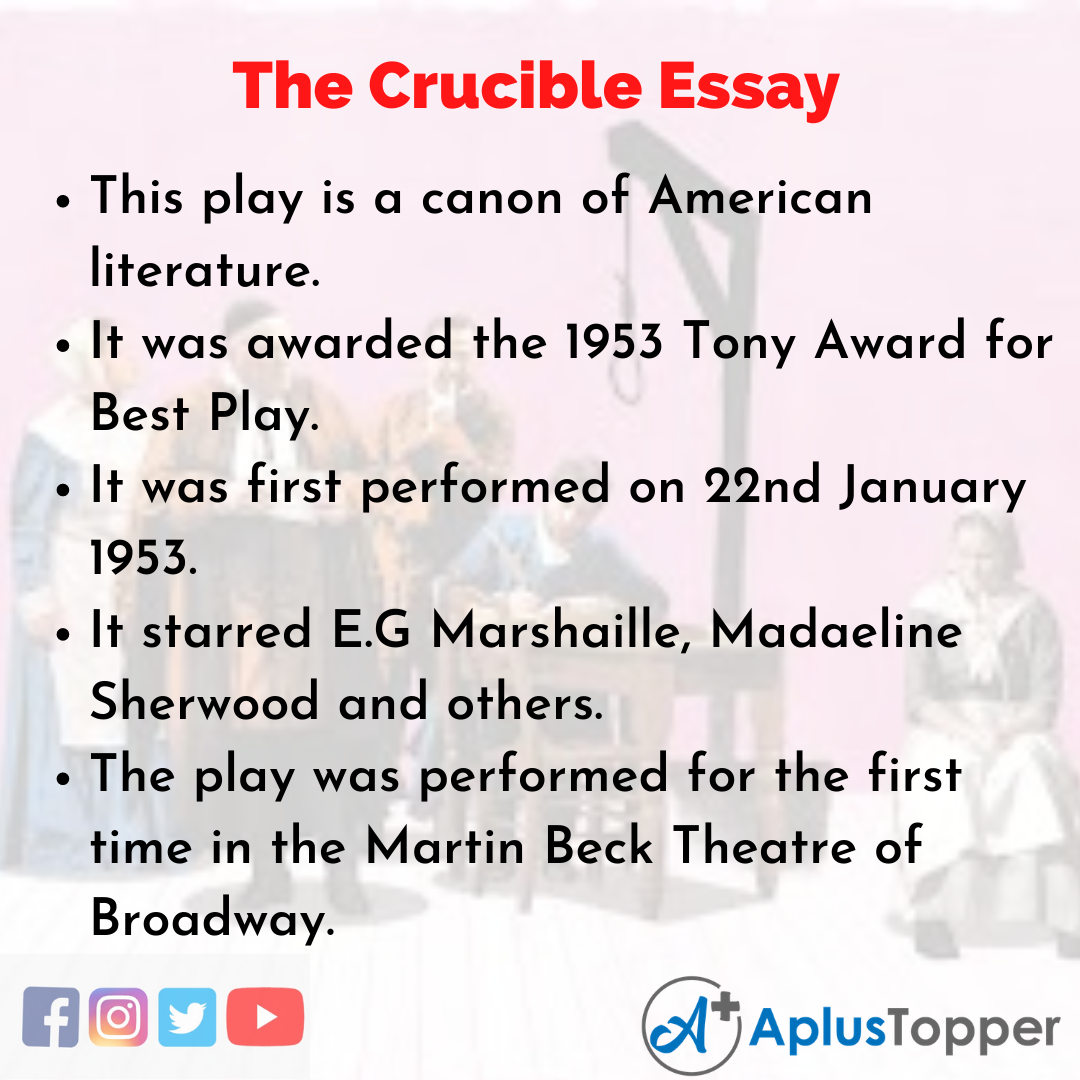 Short Essay on The Crucible 150 Words in English

The play is set in Salem, Massachusetts in 1692. It begins with Reverend Parris discovering his daughter Betty, niece Abigail and black slave Tituba dancing naked in the woods when Betty passes out.

The causes are unknown. Abigail asks all the girls involved with them not to admit their act of cursing Elizabeth Proctor. Soon it is revealed that Abigail had an affair with John Proctor and hence wanted to curse Elizabeth.

Reverend Hale starts investigating, and Tituba breaks down, claiming the work of a devil behind them. Abigail, Tituba and Betty accuse other girls of witchcraft including Elizabeth. John tries exposing Abigail by mentioning his relationship with her but fails.

Lastly, Mary, the Proctor’s servant, also testifies against him and leaves him to be arrested and hanged. The investigator Hale believes John to be innocent. John does not ask for a confession since he finds it against his dignity. A pregnant Elizabeth is pardoned while John meets his horrific end.

10 Lines on The Crucible Essay in English

1. This play is a canon of American literature.
2. It was awarded the 1953 Tony Award for Best Play.
3. It was first performed on 22nd January 1953.
4. It starred E.G Marshaille, Madaeline Sherwood and others.
5. The play was performed for the first time in the Martin Beck Theatre of Broadway.
6. It is divided into four acts.
7. The title of the play, the word crucible, is used as a pun here.
8. The play was adapted into two films, one by Miller and the other by Jean-Paul Sartre.
9. Miller was himself accused of “contempt of congress”.
10. The play was heavily influenced by the US senate McCarthy’s claim of communist infiltration in the country. 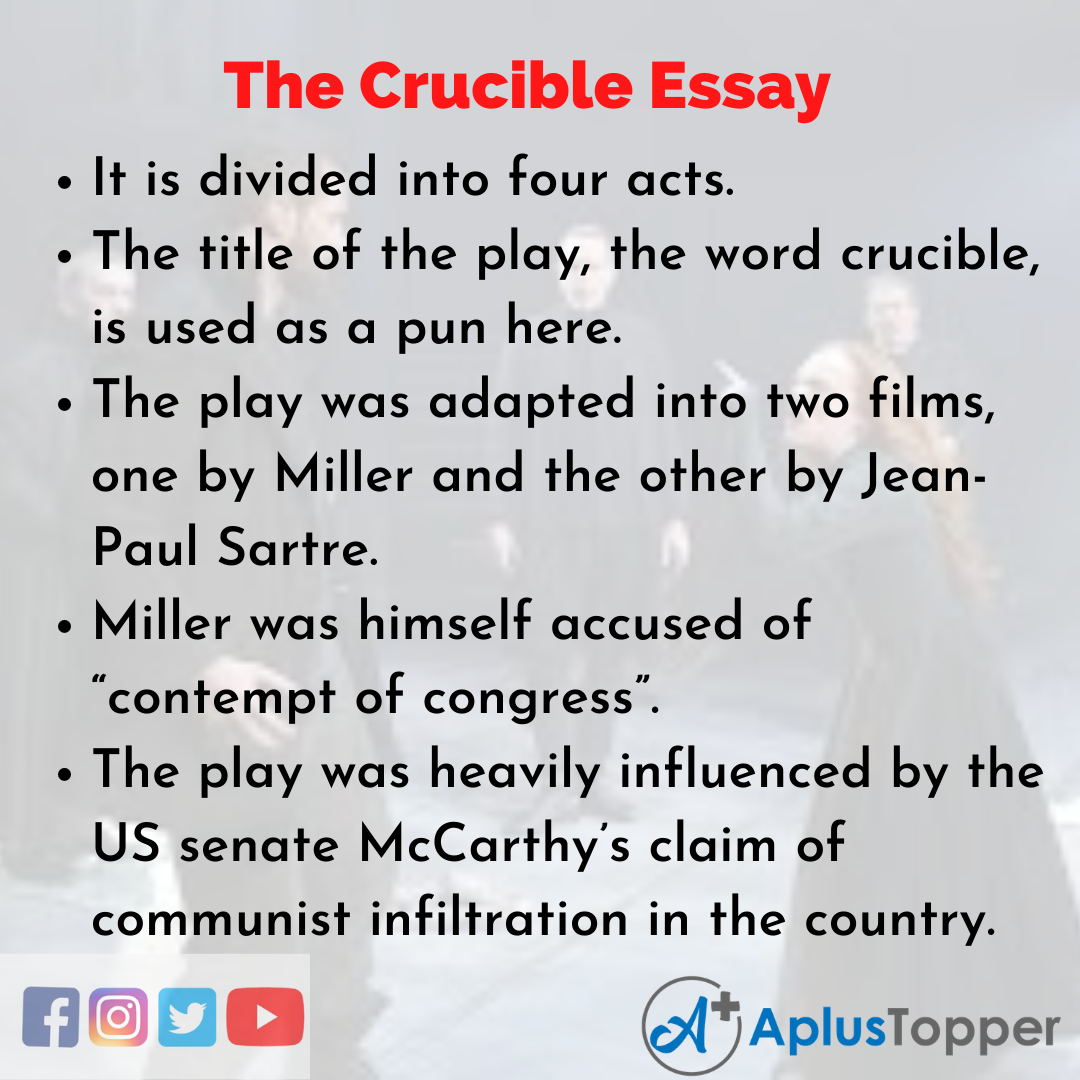 FAQ’s on The Crucible Essay

Question 1.
When did the Salem witch trial take place?

Question 2.
What does the word Crucible mean?

Answer:
It means a series of trials or a metal container in which metals are melted.

Question 3.
Who was McCarthy?

Answer:
McCarthy was a US senate who claimed a communist infiltration in the country and put many people on trial.

Question 4.
What is the main message of the play?

Answer:
It mainly tries to reflect the mob mentality of people and the false accusations leading to the punishment of an innocent.