The Cask of Amontillado Essay: The short fiction by Edgar Allan Poe, The Cask Of Amontillado, is a masterpiece in the genre of horror stories. The theme of this story, revolving around revenge, has received several acclamations.

The story came in 1846, conveying the story from the point of view of the murderer. All the names and the characters in the story represent some form of irony, and the amontillado itself forms a significant symbol.

We are providing students with samples of essay on a long essay of 500 words and a short essay of 150 words on the topic “The Cask Of Amontillado” for reference.

Long Essay on the Cask of Amontillado 500 Words in English

The story begins with the narration of Montresor, who narrates his story to an unnamed person. He tells the story of a particular day when he murdered a man, named Fortunato, who Montresor believed had insulted him. The paradox of the tale lies in the names of the characters and in the amontillado itself. The amontillado is iconic as it plays the role of a murder weapon and is used to lure a not-so-fortunate man. The man Fortunato, unlike his name, is unfortunate.

The protagonist never reveals clearly as to what the motives of the murder are. He indicates the true motivation being “thousands of injuries”. Montresor’s forms the plan to murder Fortunato by luring him to a private wine-tasting exercise. He obtains a pipe of amontillado, which is a rare variety of Sherry wine. Fortunato is a mediocre man, a fact which is a continuous source of jealousy for the narrator. The chance to seek his vengeance is because Montresor knows that Fortunato will not be able to resist the urge to taste such a fine wine. The protagonist describes Fortunato as a proud man. Montresor tricks Fortunato to drink wine, and also into falling in the catacomb, which is his ‘walled-in casket’. As Fortunato is drunk, there is not a single resistance from his side initially. When he realises what he has fallen into, it is already too late.

Montresor entombs his ‘friend’ alive and builds the walls around the catacomb. Fortunato is, however quick to sober up and starts to shake the chains surrounding him. He is in denial and pretends; all of it is a joke. As a final move to seal the tomb, Montresor drops a burning torch and puts the final stone. Several clues in the story show Fortunato is superior to Montresor, and even Montresor is aware of that. Montresor is continuously surrounded by negative feelings, like wrath and hate towards Fortunato. Even though the narrator considered Fortunato as a friend at some point in time, yet he felt insulted by Fortunato.

His motivation for the murder comes from his pride and ego. Fortunato also shows a lack of respect for the narrator’s identity and family members, which is also a reason for his death. Montresor committed the murder unjustifiably, which is quite clear from his mixture of feelings after the murder.

He feels guilt and remorse, although he rejects the feeling quickly when he should be overjoyed to have finally eliminated his enemy. In conclusion, it is clear that the narrator is an envious individual who has no excuse for a crime and is now living a life of guilt, even though he might not accept it. 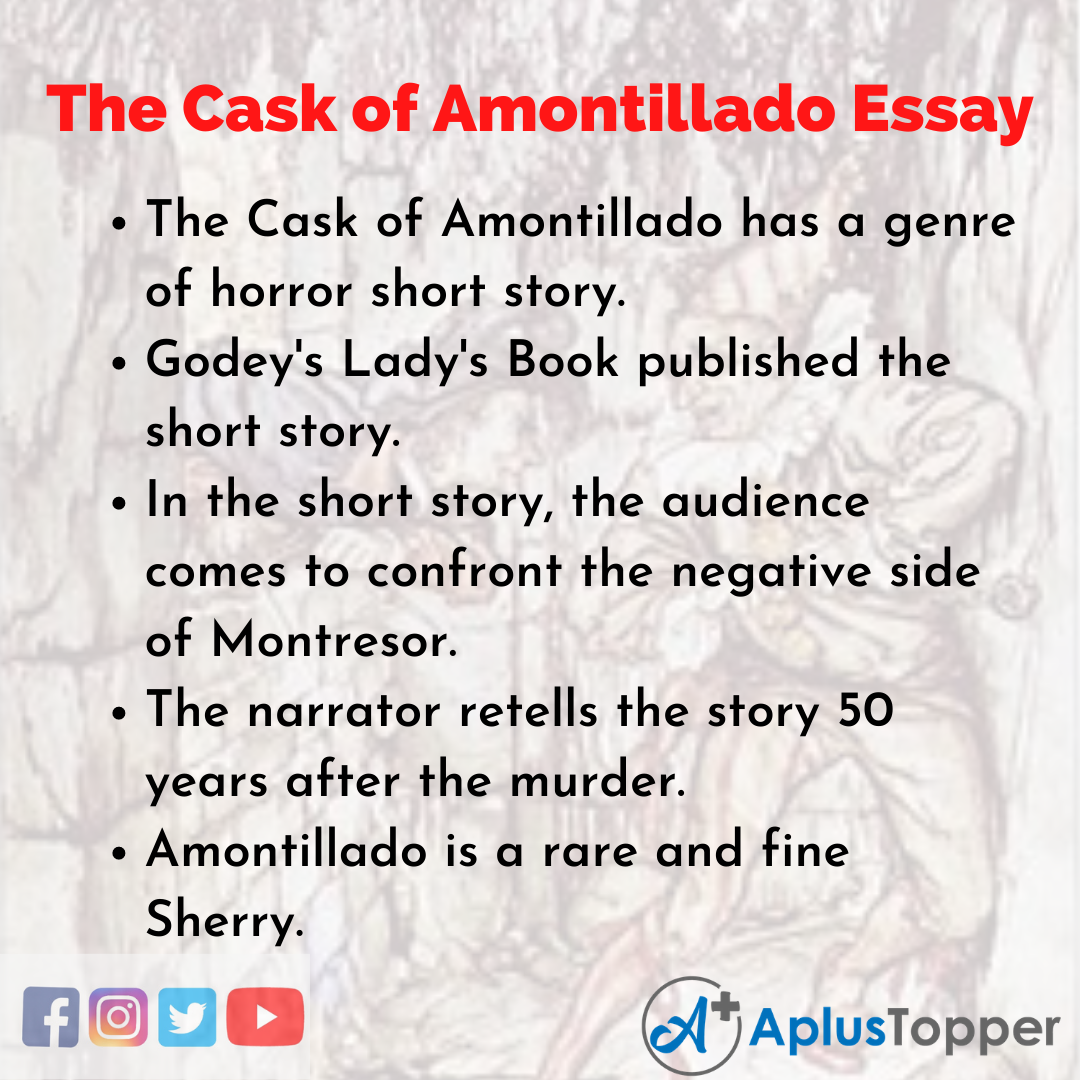 Short Essay on the Cask of Amontillado 150 Words in English

Edgar Allan Poe’s short story The Cask of Amontillado is a story of revenge. The narrator, Montresor, has a ‘friend’ Fortunato who has insulted him in some form. The narrator plans to murder Fortunato and uses his weakness for drinks as a weapon. Montresor gains a cask of a type of the finest Sherry, Amontillado and asks Fortunato for a private tasting.

Falling victim to Montresor’s traps, Fortunato digs his own grave. He is lured into a catacomb, where he is buried alive by the narrator. Although Fortunato turns sober at some time and tries to free himself, it is already too late. After the burial, Montresor is showed to be feeling remorse, but he is quick to reject the feeling. Montresor brags of the murder as a ‘perfect crime’. This attitude of Montresor is a clear depiction of his insanity. The event also possibly haunts the narrator himself, as he can perfectly depict something that has taken place 50 years back.

10 Lines on the Cask of Amontillado in English FAQ’s on the Cask of Amontillado Essay

Question 1.
Is it a good choice to read the cask of amontillado?

Answer:
Yes, this short story is one of the finest of its genres and is a classic. It is a good choice.

Question 2.
What is the terror in the cask of amontillado?

Answer:
The actual terror of the story lies in the lack of evidence. There is no proof whether Fortunato had insulted Montresor.

Question 3.
What are some other stories from the murderer’s perspective?

Answer:
The short stories “The Black Cat”, “The Tell-Tale Heart” are the ones that are narrated from the murderer’s perspective.