Texting While Driving Essay: Texting while driving consists of acts such as reading, composing, sending emails or messages or using the web on a mobile phone while operating a motor vehicle. Texting and driving is an extremely dangerous act, and authorities in some places have outlawed or restricted it.

A person, when driving and texting at the same time, is not only putting their own lives in danger but is also is posing a threat to the lives of the people surrounding him-texting while driving has been one of the major causes of road accidents.

We provide students with essay samples on a long essay of 500 words and a short essay of 150 words on the topic Texting While Driving for reference.

Long Essay on Texting While Driving 500 Words in English

Long Essay on Texting While Driving is usually given to classes 7, 8, 9, and 10.

One of the biggest achieves as a young adult is to be able to drive and get their legal driving license. In India, authorities have taken special care in implementing laws and orders to ensure a safe driving experience for everyone.

One of the main factors for a safe driving experience is for the driver to have full concentration and control over their stress. Stress and lack of concentration can inhibit one’s ability to drive safely on the road. Some aggressive drivers tend to be following no traffic rules; they are not alert when driving.

Accidents can be avoided by driving being aware and cautious of his surroundings. However, cell phones are one of the major causes of distractions during driving. People nowadays tend to be texting or browsing through the web when driving. This is a life-threatening act for not only the person driving the car but only to the people on the road.

If the driver is texting while driving, his full concentration is on his phone, and he hardly has any conscious about his surroundings. This can lead to major life-changing accidents which could have been dodged if only the driver had kept an eye on the road. Texting while driving is hard to stop as people nowadays with their hectic have their entire world stored in their phones. That is why even when they are driving, they find it hard to stop themselves from checking the phone.

With the drastic exponential advancement of technology, it has become a part of everyone’s lives. Many people cannot stay off their phones for a long amount of time. These people use text messages to deliver their thoughts, whether it is to a friend, family or work-related. However, texting while driving has become one of the leading reasons for road accidents, ultimately leading to death.

The age group most affected by this issue is between 18 to 30 years. There is no benefit from the issue of texting and driving. People need to value their lives and also the lives of the people around them more and realise that send the message an hour later when they are done with driving will not make the world come collapsing down.

There are a few ways in which one can avoid texting while driving. The driver should text before they start driving, and the phone should be kept away from their reach when they are behind the wheels. Not hearing the notification will make the driver is less tempted to check their phones. When a person is in a car, there is already a threat to their lives—texting while driving adds to the risks-texting while driving can be way more dangerous than drinking and driving. Even though there are serious consequences of the act, there are not many laws applied for a person texting and driving.

People need to be conscious of the threats of using the cell phone when driving. One needs to realise that no text message or notification is worth the risking the life of oneself and others. It is high times serious laws in this matter should be made, and penalties should be applied for the sake of survival. 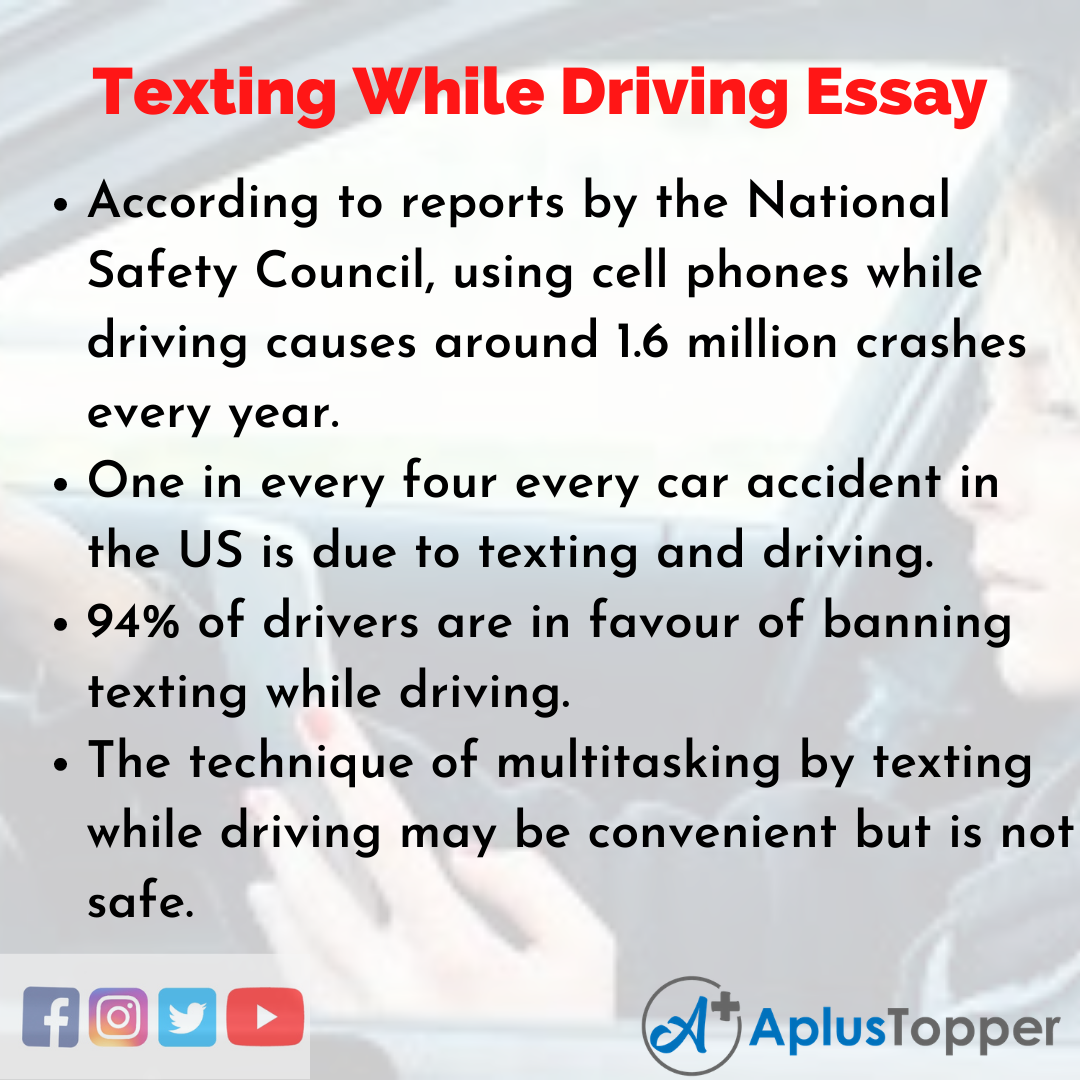 Short Essay on Texting While Driving 150 Words in English

Texting while driving increases the probability of accidents. A survey showed that one out of twenty drivers use the cell phone when driving. When texting and driving. A person who is driving the car is in great danger as his mind is neither on the road nor is his eyes. There are few laws enforcing texting and driving; however, unfortunately, these laws are not strict enough to completely forbid the practice of texting while driving. Many drivers don’t take these laws seriously fail to understand how serious it can get.

When texting and driving the driver’s whole concentration is on their phone while they hardly concentrate on what’s around them. It is one of the most threatening acts in the world today as people get so caught up in technology that they fail to realise what danger lies ahead of them.

10 Lines on Texting While Driving in English 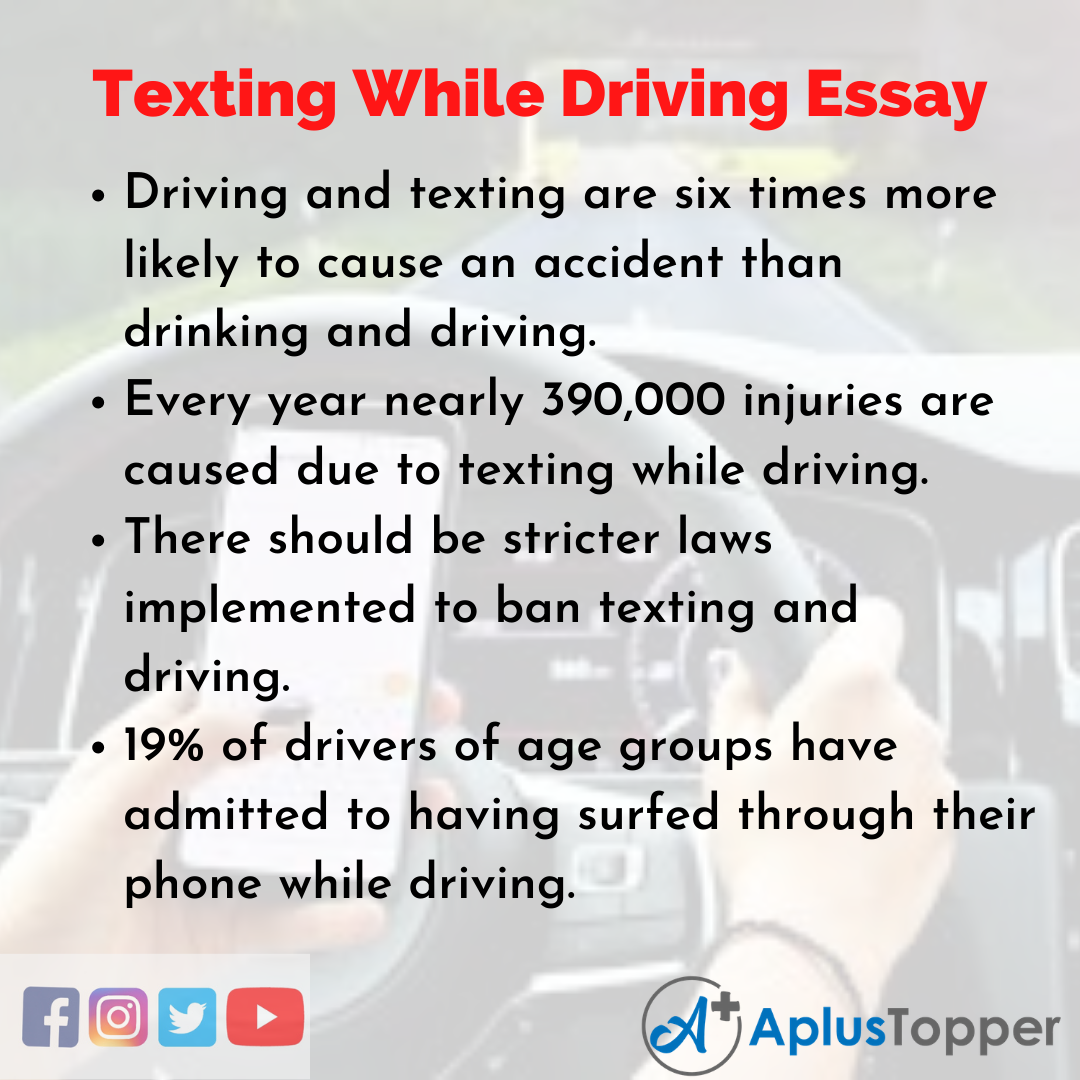 FAQ’s on Texting While Driving Essay

Question 1.
Which was the first state to have passed a law to ban texting and driving?

Question 2.
Is it okay to text while driving when it is an emergency?

Answer:
If it is an urgent message and needs immediate attention, it is always better to stop the car in a safe spot before texting.

Question 3.
Is it illegal to text when driving?

Answer:
Yes, it is illegal to text when driving.