Terrorism In India Essay: Terrorism in India has had many faces. There have been instances of insurgency in Kashmir and the North East. Similarly, there have been cases of blatant terrorist attacks from outside. Terrorism had once grasped India’s flight operations too. This happened when Indian Airlines 814 was hijacked in Kathmandu, and an Air India flight bound for Canada, nicknamed Kanishka, was blown in midair. Recently there have been instances of terrorist attacks at military facilities too. The attack on Pathankot Air Force Base and the Pulwama Disaster are examples of such attacks.

However, every time terrorism has struck India, India has responded with all her might and vigor. This includes the retaliation operations on the part of India that are undertaken to end global terrorism. We have written two such essays covering the topic, which might be beneficial for students during their exams. 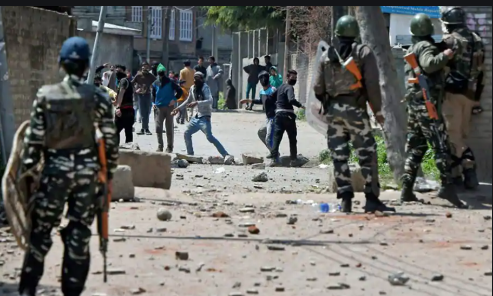 Long Essay on Terrorism in India 500 Words in English

Terrorism In India Essay is helpful for students of classes 7,8,9 and 10.

Terrorism knows no religion. Often this remark is heard in popular media. It means that no hard and fast rule can signify the reason behind terrorism. For India, the case has nevertheless been the same. However, the insurgencies in Kashmir and the North East are examples of not just terrorism but also political conflicts. The situation in Kashmir has persisted since Independence. It has been the reason for wars between India and Pakistan.

Terrorism in Kashmir mainly stems from the willingness of the people of Kashmir to be given their region and autonomy. While even a few days back, they were granted status as a special state by the Indian Constitution; nevertheless, the ordinary people over there have suffered more than any other state in this country. The constant infiltration from the borders, the abject poverty of most of the people, and an unfulfilled desire of freedom-together these three factors have to lead to the rampant propagation of terrorist activities.

The Armed Forces Special Powers Act has been in implementation in Kashmir for a long period of time. This has witnessed abuse of power by the members of the armed forces. This includes the cruel killing of young and innocent Kashmiri boys and the use of a human shield for battle. Such factors have often lead to the disruption of peace and terrorist operations. In the case of the Northeastern states, mainly Arunachal Pradesh, which shares its borders with China, there have been insurgencies and counter-insurgency operations. This has mostly happened due to the Chinese intervention into the political and social lives of the people living in that region.

The most grotesque terrorist attacks to have taken place in India were the Parliament attacks of 2001 and the Mumbai Attacks of 2011. There was a new mode of terrorism in these cases, which included terrorist coming into the countries surpassing security checks. The parliament attacks, however, could be controlled and did not cause many casualties. The attacks of 26/11, however, were far more significant in size and extent. The financial capital of India came under attacks from terrorists who entered India through the Arabian Sea. These terrorists massacred three different properties in Mumbai, including the Taj Mahal Hotel, Nariman Point, and the Oberoi Hotel. It created confusion, havoc, and fear among all the people living in Mumbai and across India. Many people lost their lives, including guests of these hotels, police officers, and a major of the national security guard. When the situation seemed uncontrollable, India’s NSG was deployed to tackle the terrorists in what they termed as Operation Black Tornado.

The NSG was successful in neutralizing the terrorists at all locations apart from one who tried to escape and was arrested. The only person to have lost his life in this ghastly attack was Major Sandeep Unnikrishnan. Major Sandeep worked to provide a shield to his injured soldier Gajendra Singh while he chased one of the terrorists. In this process, the terrorist opened fire on him, and he succumbed to his injuries. There have been instances of terrorism in India even to this day. The Pulwama incident is one such example. However, strong retaliation measures on the part of India in the form of airstrikes and surgical strikes have sent secure messages of India’s commitment towards dismantling terrorism. This essay is best suited for students of classes 7, 8,9,10.

Terrorism is an act of harm directed to an individual or a group of individuals with or without any purpose. Often terrorist activities in India have centered on political issues. For instance, the assassination of Rajiv Gandhi by members of the Sri Lankan rebel group LTTE happened because of the Indian peacekeeping mission in Sri Lanka. However, this was a single activity and did not cause many individuals’ deaths, unlike the 26/11 incident or the Parliament attacks. In the case of 26/11, India witnessed an extreme form of terrorism that threatened the nation’s peace and security. While in the end, it has been possible to neutralize terrorists through military operations; nevertheless, terrorist activities keep happening. This is because terrorist activities in India mostly stem from cross border movements, and borders cannot be sealed at any point in time.

We have often noticed India blaming its neighboring countries for giving safe shelters to terrorists. This is because most of the terrorist activities in India can be traced back to such countries. Despite growing terrorist movements, India has been keen on its commitment to end terrorism across the world through various means. This essay is best suited for students of classes 1, 2, 3,4,5,6.

10 Lines on Terrorism In India Essay 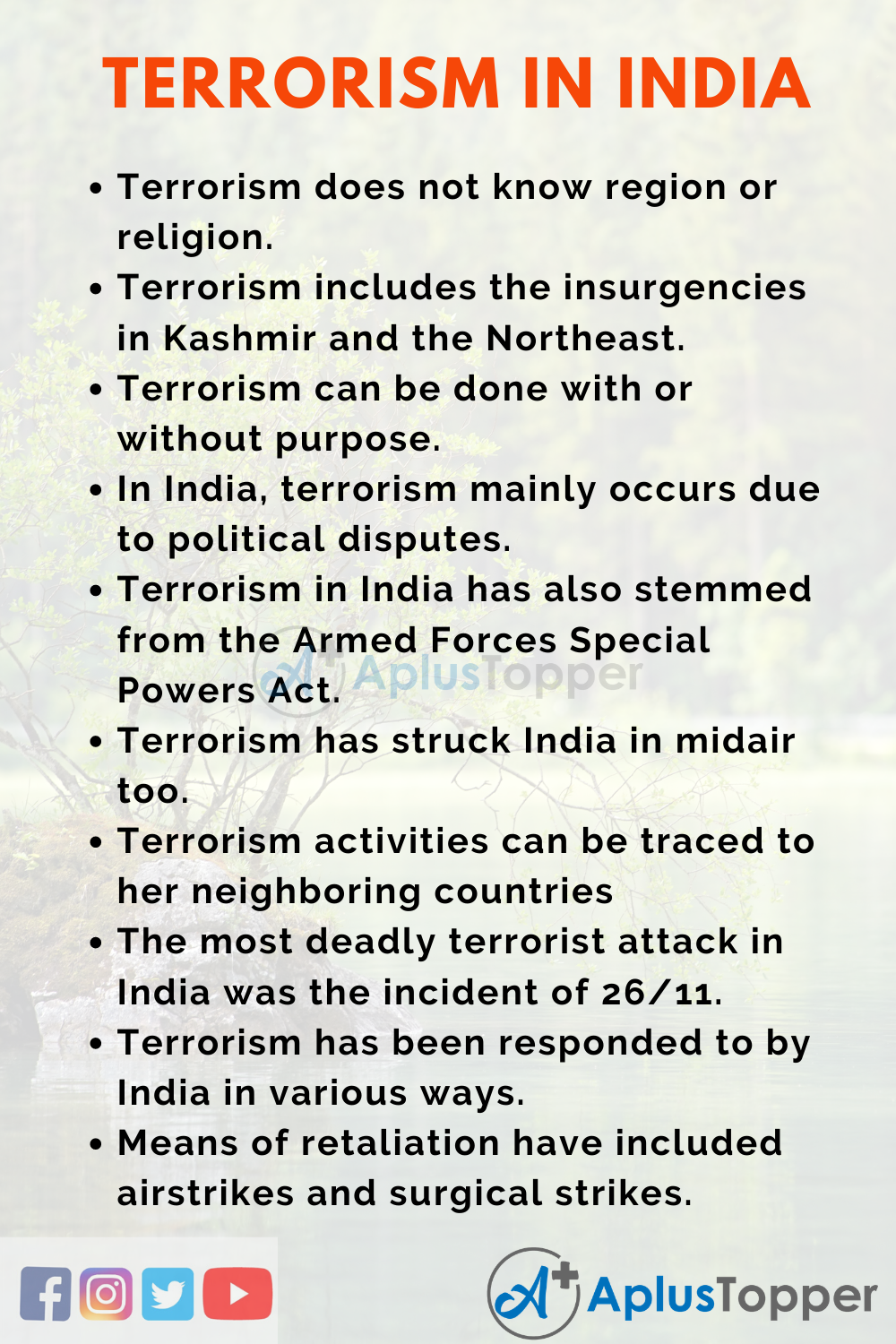 FAQ’s On Terrorism In India Essay

Question 1.
What is the nature of terrorism in India?

Answer:
Terrorism in India has included terrorist attacks and assassinations.

Question 2.
How does India respond to terrorist attacks?

Answer:
India responds to terrorist attacks in the form of military operations, airstrikes, and surgical strikes.

Question 3.
What are the recent cases of terrorism in India?

Answer:
The recent cases of terrorism in India are the Pathankot attacks and the Pulwama incident.