Teenage Pregnancy Essay: Teenage is a crucial growth phase in the life of any individual fraught with physiological changes and often, psychological conflicts. In this condition, finding oneself to be a pregnant teenager can come down as shocking and even traumatizing for the individual, as-well-as, for her family and friends.

Scientifically speaking, teenage pregnancy is the occurrence of pregnancy in females under the age of twenty. Sometimes, even pre-teen females can become pregnant, as reported in various instances. Teenage pregnancy is a matter of social stigma in most countries, and adolescent mothers are often met with socio-economic disadvantages and ostracization.

We are providing students with essay samples on an extended essay of 500 words and a short piece of 150 words on the topic of Teenage Pregnancy for reference.

Teenage pregnancy is the occurrence of pregnancy in females under the age of twenty. Teenagers belong to the age group of thirteen to twenty, and while teenagers are not practically children, they aren’t adults either, and this phase of confusion puts them at a greater risk. As sexual development sets in, teenagers are hounded by curiosity to explore their bodies. Due to a lack of awareness regarding sex, they often engage in unsafe sex, eventually becoming teenage parents.

Another reason is a discussion regarding sex being a taboo. Often conservative parents and even teachers in schools don’t engage in sexual conversations. As a result, teenagers lack basic knowledge about sex or safe sexual practices. The lack of resources on sexual awareness leads teenagers to seek help from their peers that eventually leads them to have wrong notions about sex. Teenagers barely understand the issues regarding sexual intercourse and the use of contraceptives. A study in the United States reveals that about 53% of teenagers lack information regarding sexual intercourse and contraceptives. The glorification of sex in mainstream media is another reason why most teenagers lack the moral outlook that prevents them from engaging in irresponsible sexual activities—engaging in underage alcohol consumption and drug abuse is another contributing factor in teenage pregnancies. Often teenagers seeking social validation from their peers engage in drinking resulting in them losing their senses and eventually engaging in unsafe sex.

In developing countries, sexual abuse of underage girls from lower backgrounds majorly contributes to rising rates of teenage pregnancies. Hailing from low-income backgrounds, these girls are pushed into sex trafficking to support their families and are exploited by older men. In most developing countries, girls are married off eighteen, and such teenage pregnancies are not met with social and moral stigmatization.

Whereas in developed countries, most teenage pregnancies occur out of wedlock while the teenagers are still in school, leading to social ostracization and alienation of such adolescent mothers. They often have to drop out of school, and without a formal degree, they have to do low-income jobs to support their child. Such children hailing from underprivileged homes, often without a father, engage in criminal activities and drug abuse, thus add to social evils and poverty. In a nutshell, teenage pregnancies create a domino effect in society at large. 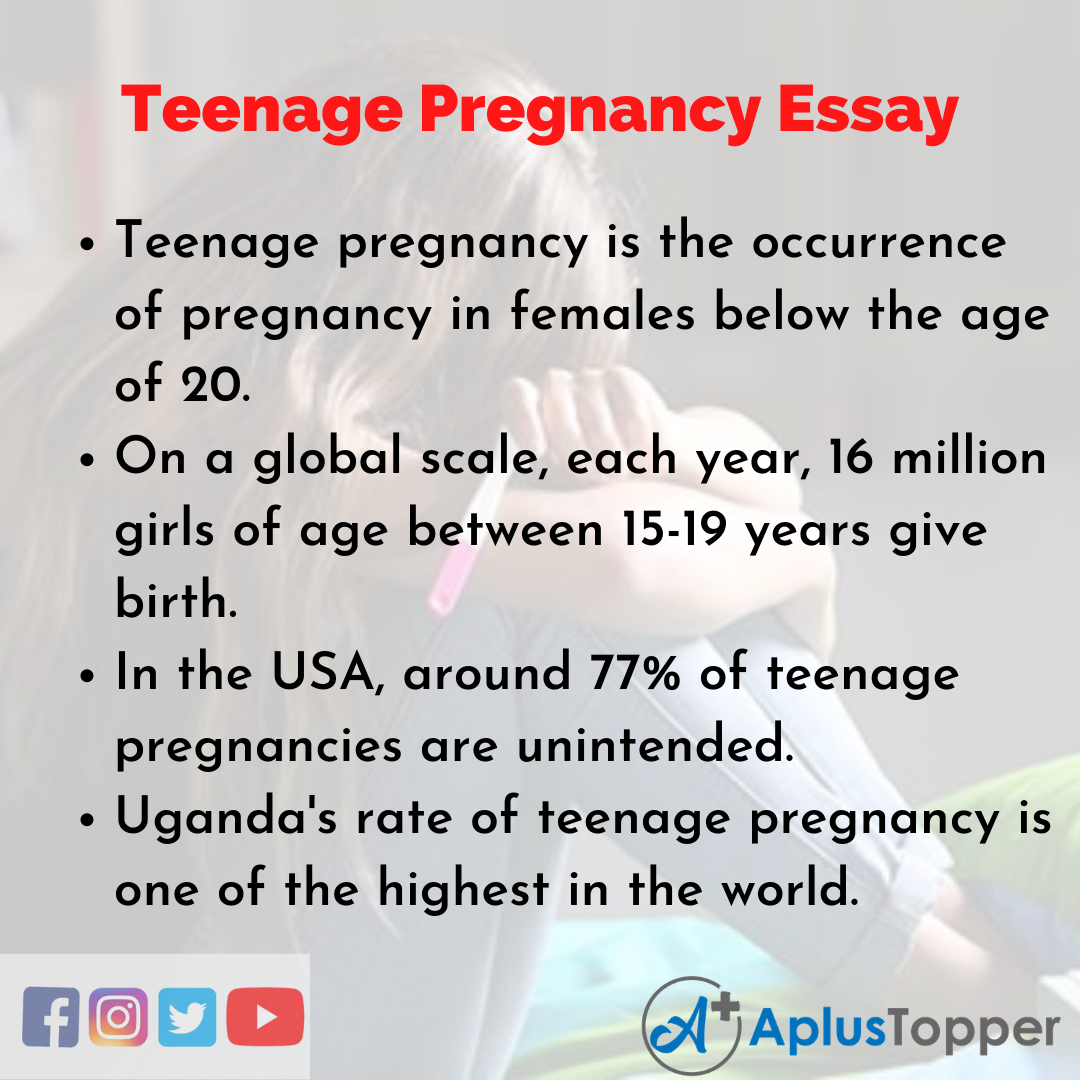 Teenage pregnancy occurs in females aged between thirteen to twenty years when they engage in unsafe sex with their partners leading to unwanted and unplanned pregnancies. Studies show that both teenage boys, as-well-as adult men, engage in unprotected sex with minor girls making them pregnant in the process. Most such men don’t end up marrying the girls. Teenage pregnancy is a widely prevalent social evil that arises due to a lack of communication between conservative parents and teenagers, leading to a lack of sex education.

The glorification of sex in media gives teenagers a distorted moral and ethical view, and they fail to understand the consequences of engaging in underage sex. Teenage mothers and children often end up in social alienation, and such mothers have to leave formal education midway to earn a living. A lack of education, low background, overall lack of awareness of sex education, and birth control methods leads to increased teenage pregnancies. 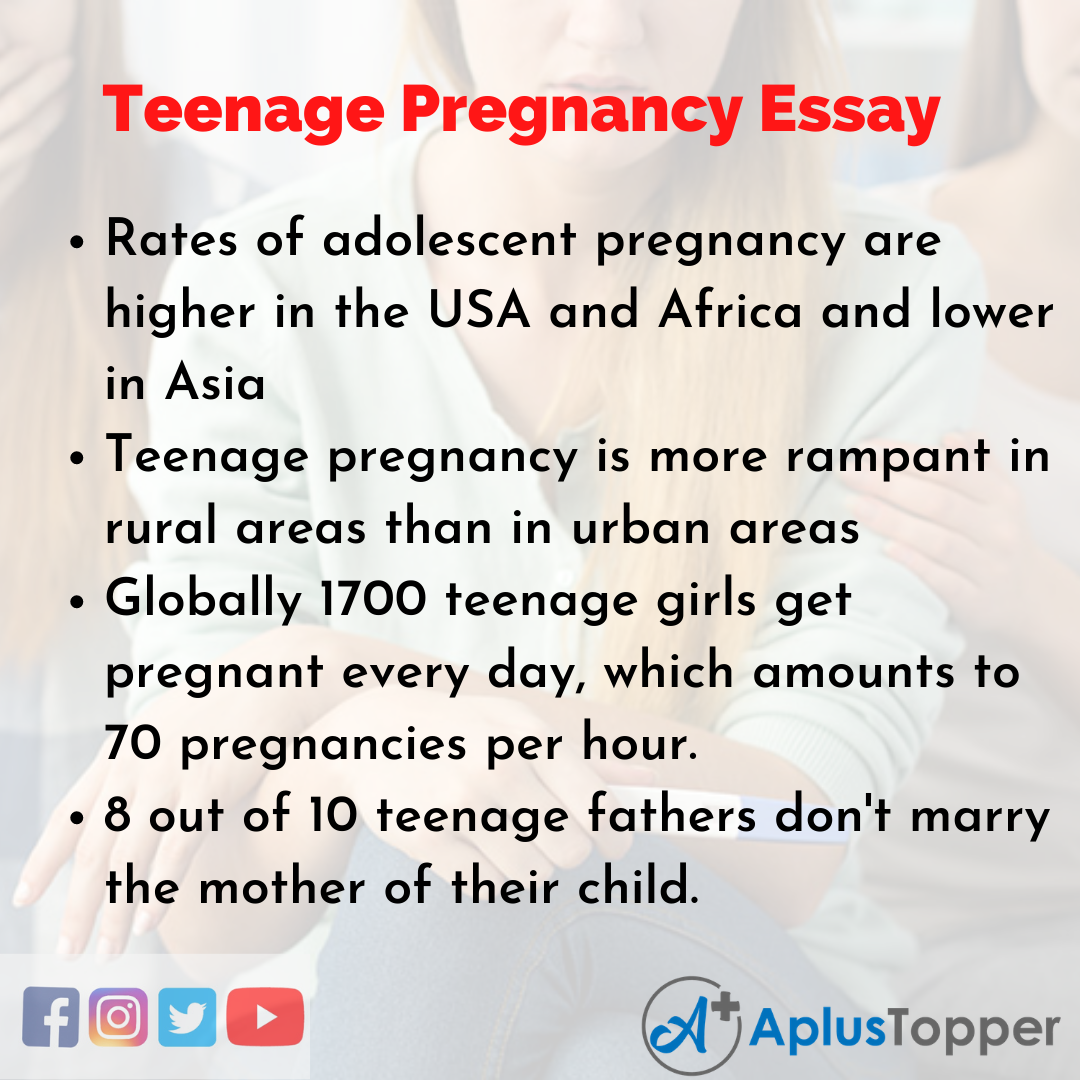 Answer:
Unprotected and unsafe sex by teenagers due to lack of awareness regarding sex primarily causes teenage pregnancy

Answer:
Ideally, teenage pregnancy is not safe as teenage mothers are underage, and their bodies are not physically and psychologically ready to bear a healthy child.

Question 4.
How to be safe from teenage pregnancy?