Technological Gadgets Vocabulary: Learning the names of Tech Gadgets is very important in our day-to-day life. It is the best place to know the Technological Gadgets Vocabulary in English here. A technology gadget is a mechanical or electronic device with practical use. The common technical gadgets in English are shown with the help of the pictures are shown in this article. It is beneficial for the learners in the time of conversation by knowing the technological gadgets name list. Nowadays people are addicted to using technological gadgets like cameras, phones, ebooks, laptops, smartboards, tablets, and so on. 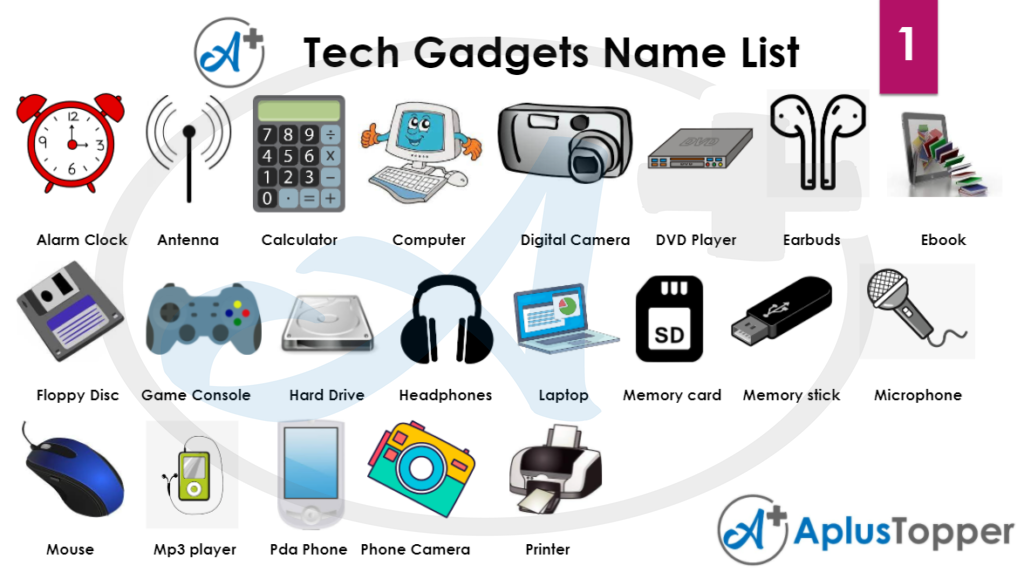 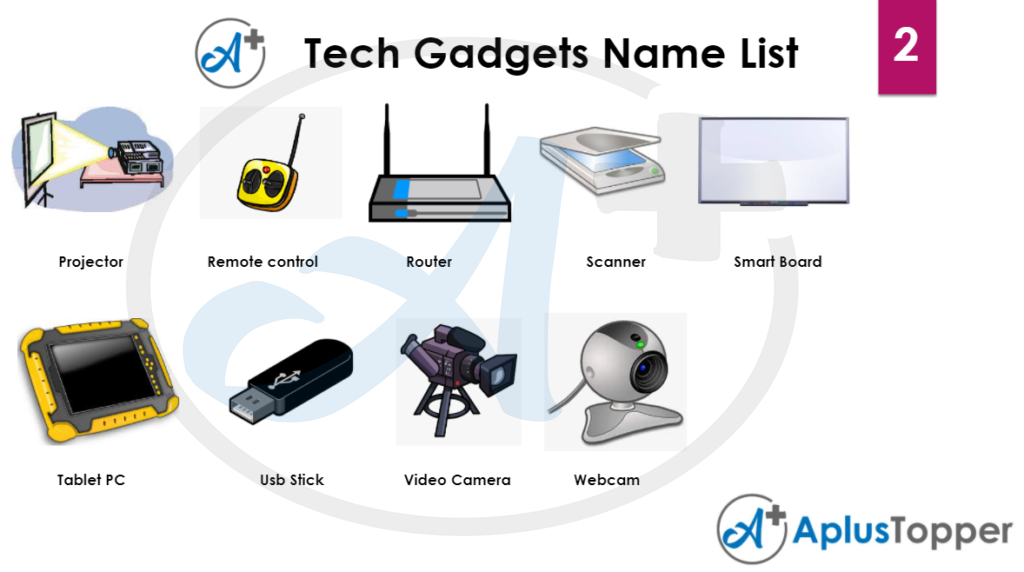 The list of technological gadgets in English with images is shown below.

The alarm is a device made to make a sound at the time setup. It is used to wake people up in the early morning and sometimes it is used as a reminder.

The antenna is a metallic structure that receives and transmits radio electromagnetic waves. It is in different sizes. The small size is used for TV signals and the large size is used for capturing the signals from satellites.

A calculator is a device with a keyboard and visual display that performs arithmetic operations like addition, subtraction, multiplication and division. It also handles the trigonometric functions and hyperbolic functions etc.

The computer is an electronic device for storing and processing data. It stores the data and processes the data in binary form. The full form of a computer is a common opening machine purposely used for technological and educational research.

A DVD player is a device that plays the DVD video and DVD audio technical standards. DVD is connected to the television to watch the DVD content. The full form of the DVD is a digital versatile Disc. 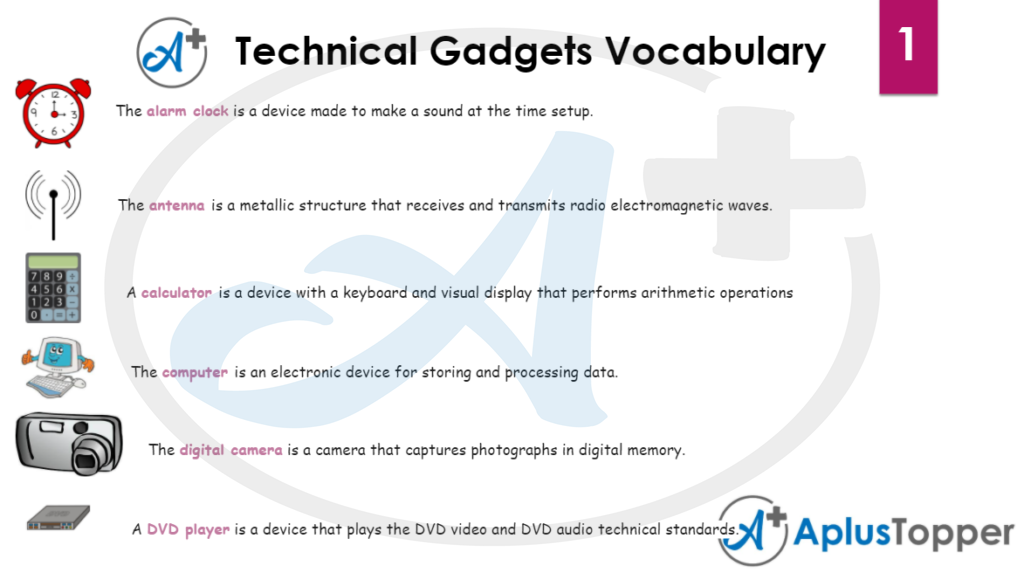 Earbuds are small earphones inserted into the ear. It is a wireless device that is connected to the phone by using Bluetooth. It is used for listening to music. It is expensive compared to earphones.

Ebook is a full electronic book that means the book is available in the digital form consisting of images and text. It is an electronic device. E-books can be published in different file formats like pdf and text format.

A Floppy disc is a type of disc. It is used to store files or carry files from one computer to another computer. The floppy drive reads the disk and then the user is able to open the files and save them on the disc.

A game console is a computer system specially made for playing video games by connecting it to a television or other display. Examples of a game console are Sony PlayStation, Nintendo GameCube.

The hard drive is a hard disk, it is an electromechanical data storage device. It is a secondary storage device used to store data permanently. It is non-volatile, which means data is retained when the computer is turned off.

Headphones are hardware devices. It is a plug-and-play device that can be plugged into a computer, laptop, and phone. It is a single-user device. It is also called ear speakers and earphones.

A laptop is a portable device and suitable to carry while traveling also. It has a screen and keyboard. They give the flexibility and freedom to do the work. 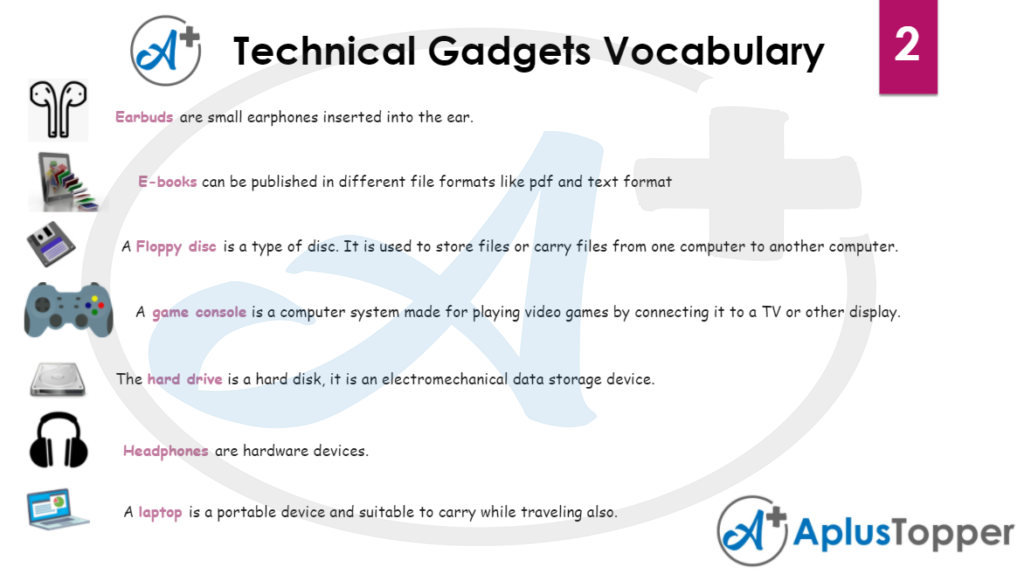 A memory card is an electronic data storage device used for storing data in digital form. It is in the form of flash memory. Used in electronic devices such as video games and digital cameras.

The memory stick is a removable flash memory card used to store data in digital cameras and other kinds of electronic devices. It has a greater maximum storage capacity and faster file transfer speeds.

A microphone is also known as Mic. It is used in many applications like telephones, hearing aids, sound recording, it is defined as something people talk into that makes their voice louder.

A mouse is a device that interfaces with the computer. It has two buttons, one is left and the second is right and it has one scroll wheel. It also works as a button.

Mp3 player is a device that stores and plays songs. They are smaller than the standard sound devices. The device can produce a maximum volume of 100 to 115 decibels.

PDA phone is also known as a handheld pc. The full form of PDA is a personal digital assistant it is a variety of mobile device functions as a personal information manager. It has the ability to connect to the internet. It has an electronic visual display and includes a web browser.

A photo Camera is a technical gadget that is used to take pictures. 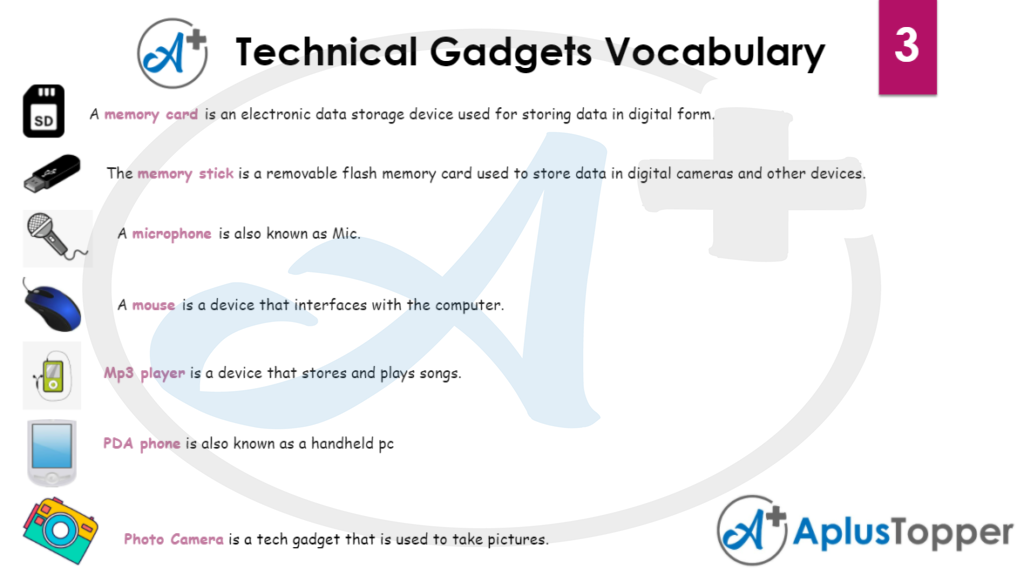 Remote control means controlling a machine or vehicle From a distance by using the radio or electronic signals. It is a piece of electrical equipment. We can see it has a TV remote, DVD player remote and other home appliances

A router is a switching device for networks that are used for internet access. It helps to connect multiple devices to the internet and connect the devices to each other. We can use routers to create the local networks.

A Smart board is a touch-sensitive board connected to the computer used for teaching the lesson. The user is able to click the buttons and highlight the points and it is a wireless device. 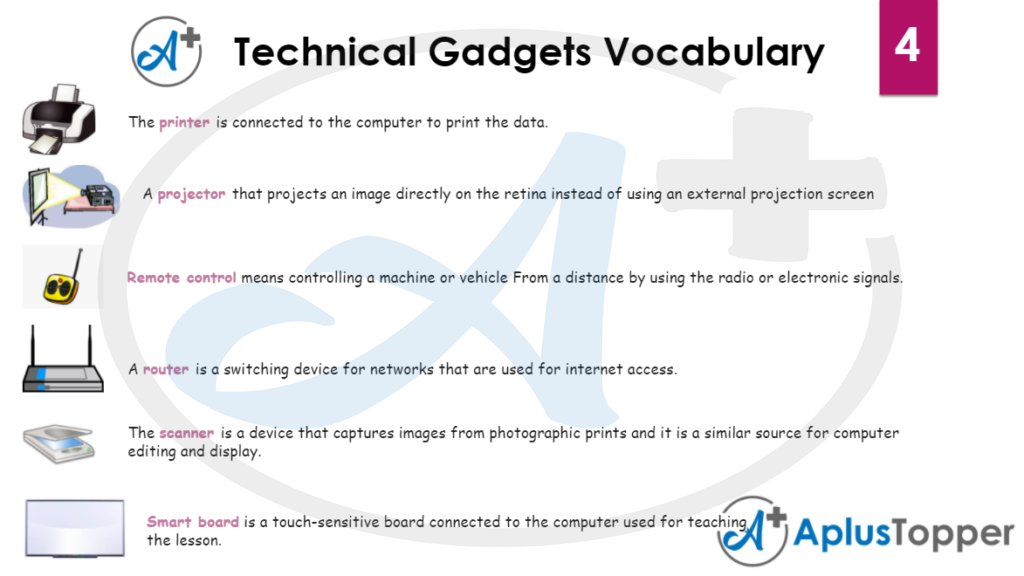 Tablet PCs are like computers. It is the middle size between the laptop computer and a smartphone. It uses a keyboard for input information. The operating system is like a mobile operating system and it has a touch screen.

A USB stick is a storage device used to store digital information. We can connect to the USB port of the computer or other devices. It is also called a USB flash drive. It has the ability to carry more information in seconds.

A video camera is a camera used for capturing the motion of an object. Video cameras stream the live video feed to a computer. It has two layers, the second layer is transmitting the video signal and the first layer is capturing the other image.

A webcam is a digital video device that is commonly connected to a computer. The main function is to transmit pictures using the internet and it is used for instant message services and for recording images also. It is also known as a network. 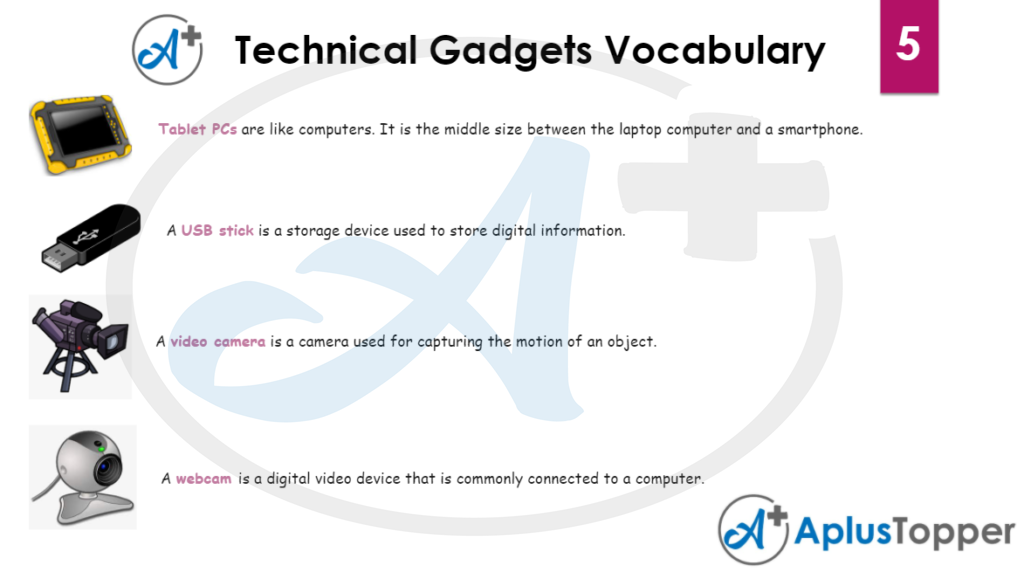