Suicide Essay: Suicide is the self-inflicted death people commit to ending their lives and escaping reality. Many people around you commit suicide. It is not easy to predict who it will be. Mostly the youths think about attempting suicide statistically.

Depression and suicide are rampant in today’s time and is a growing issue of concern. Depression is an illness that pushes a person to commit self-harm or even commit suicide.

We provide children and students with essays and an extended essay of 500 words and short writing of 150 words on the topic “Suicide” for reference.

Suicide is continuously talked about the subject in our society. There are multiple papers, books, journals, and other documents that discuss the topic. These topics discuss the personal experiences of a person who was suicidal or had to face the horror of losing a near and dear person to suicide.

Suicide is the cause of death for a wide range of illnesses like depression, anxiety, schizophrenia, among others. It is difficult always to comprehend the reason why a person commits suicide. It is because self-preservation is the strongest instinct of all living beings. We are obliged to know why others consider ending their life.

Suicide is especially a critical factor in our society during the ongoing pandemic. People are locked tight in their homes, with sometimes no one to share their woes. People who suffer from depression or have genetic vulnerability have more tendency to act on their suicidal thoughts.

It is not easy to know who is having suicidal thoughts unless they explicitly tell you so. Hence, mental health is such an important issue. People need to be made aware of the simple solution to their mental health issues. There remains a stigma in society about the people who visit mental health specialists. Many consider that mental health problems are not actual problems but are rather a fiction of their imagination. The thought creates fear among people who need to visit the specialist since they are afraid of being labelled as ‘mad’ or afraid they will be shunned.

Ultimately, the reality remains that the ambition to commit suicide results from disconnection with other people, tragic sadness, or great, unbearable loss. Many religions around the globe consider suicide to be a sin.

On a different note, euthanasia is also the willing termination of a person’s life, but it is much more understandable since they are in great physical pain. But such a thought in a physically healthy individual is often incomprehensible. We must extend our efforts to our friends and family and make an effort to understand their pain. We can lend an empathetic ear to their problems. Often, showing genuine concern about someone who is ill can encourage them to visit the doctor.

Suicide is an alien thought for most of us, but we can accept that such extreme feelings exist capable of making someone feel miserable. People who are suffering from deteriorating illnesses, therefore, must visit a mental health specialist.

The diseases of the mind are just as fatal as the diseases of our body. A person with a fit body cannot be called healthy if they have suicidal thoughts. Many people who suffer from depression speak of pain in different parts of their bodies they cannot describe. They are unsure of how they are feeling and try to separate themselves from other social contacts. Therefore, people should check for these signs in the people close to us and talk to them if necessary. Let us vow to make the people surrounding our lives healthy and happy, and visit the doctor if we have negative thoughts. Suicide is voluntary, taking a person’s own life. It can occur in every country, society, and culture in the world. It is a leading cause of early mortality in our society. Hence, it is a serious public health problem and a massive tragedy for the victims’ families and friends.

The leading cause of suicide is depression. Depression can range from feeling sad to extreme thoughts about taking one’s own life. It is a serious disease and may lead to death if not treated. More and more people are under stress and depression in today’s world due to our social structure.

Depression drains the patient’s energy and the will to live. A person suffering from depression is not easy to spot. Hence, it is crucial to extend our genuine concern to everyone around us. It will help people open up and speak about their problems, which is the first step towards preventing suicide.

10 Lines on Suicide Essay in English

1. Suicide is the voluntary ending of one’s life.
2. More than 90% of people who are suicidal or commit suicide to suffer from mental illness.
3. The most common reason a person is suicidal is depression.
4. Suicide is one of the leading cause of untimely death in the world.
5. Disturbing thoughts in a person characterize mental illness.
6. It is not easy to spot a person who is depressed.
7. Depression can be cured by visiting a mental health specialist.
8. The person who dies of suicide feels the pain only once, but the people around them need to carry the burden for their entire life.
9. Suicide can also be caused due to PTSD, stress, anxiety, etc.
10. If you feel a person is on the verge of committing suicide, contact a physician immediately. 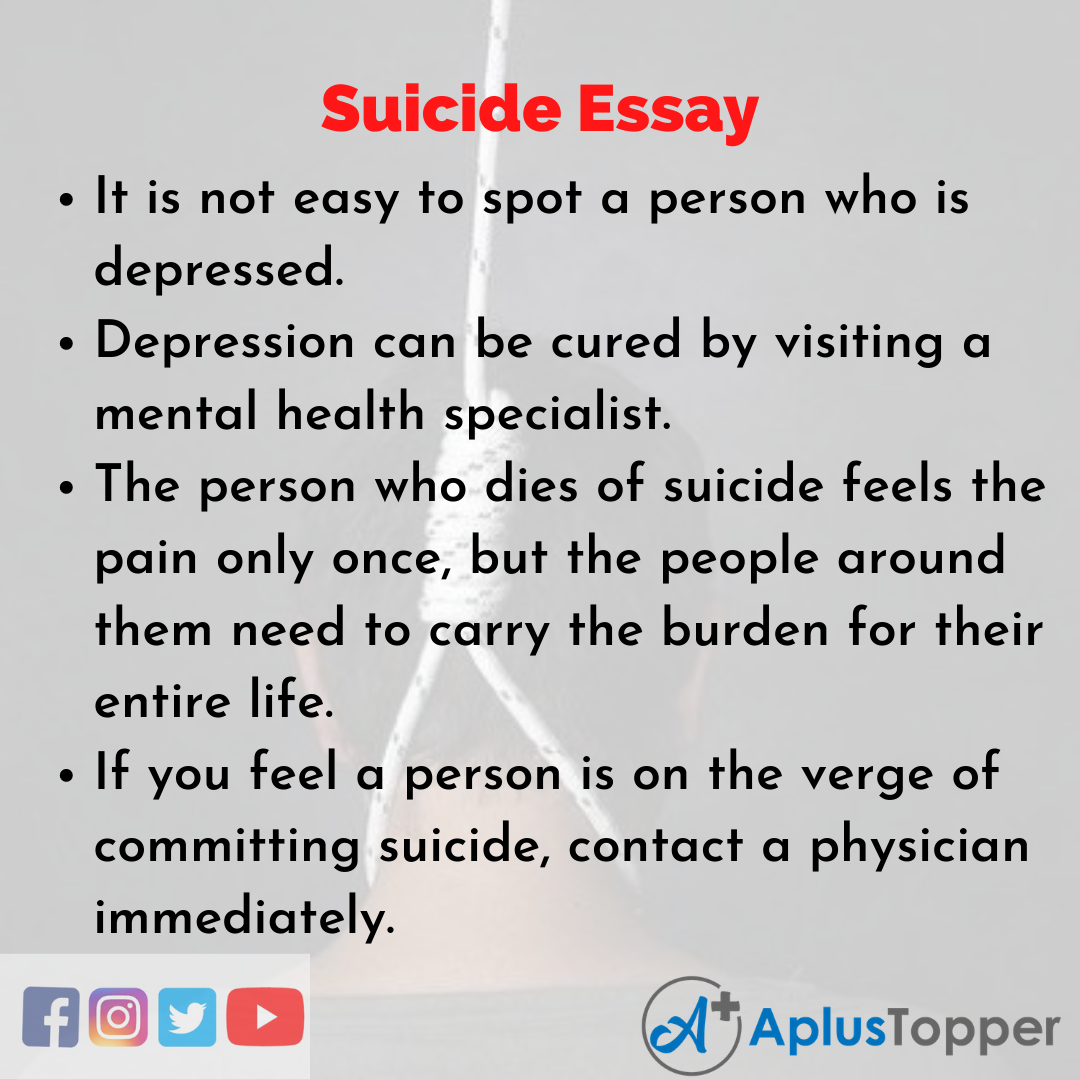 Question 1.
What is suicide?

Answer:
Suicide or suicidal tendency is the act of intentionally ending one’s life due to mental diseases, family issues, etc.

Question 3.
Which age group is most prone to commit suicide?

Answer:
Suicide can occur among all age groups, but it is most commonly seen among teenagers and young adults.

Question 4.
Why do people avoid talking about the topic of suicide?

Answer:
Suicide is a topic people actively avoid because it makes them uncomfortable. Our inability to face the harsh facts in the face has made talking about it so difficult for people suffering from depression.