Speech On Drug Abuse: The drug is a substance that can cause the death of an organism if taken more than the dosage. It causes a change in the physiological and psychological structure of the organism when it is consumed. There are various mediums through which one can intake or consume drugs like smoking, inhalation, injection, etc.

In pharmacy terms, a drug is a chemical substance, that is typical of a known structure, which, when entering into a living organism, produces a biological effect. The other name given to pharmaceutical drugs is medicine or medication. It mainly treats cures or prevents a disease present in a body. Pharmaceutical drugs should be used for a limited time, or it may cause severe disorders if taken regularly.

In this article, we provide a long speech for students and children on the topic of Drug Abuse with about 500 words and another short speech with 150 words approximately on the same topic.

These speeches can help anyone who is looking forward to presenting a speech on the topic as mentioned above, be it students, teachers, or any other research person.

Furthermore, we have also included ten Lines on the topic and some FAQs to make the content clearer to our readers.

Very good morning and a warm welcome to everybody present here today. Today, I will be talking on the topic of‘ drug abuse’.

The word ‘drug’ when it comes to one’s mind, is taken in a negative sense as it is often misused. If the drugs are used for serving a useful purpose, it could bring a considerable change in the lives of people.

The drug is not a dangerous substance itself. But people misuse it in many ways. It is highly dangerous and can cause serious health problems if one takes it on a regular basis. The drug has become a trend in today’s world. Today’s generation has become obsessed with following whatever is new or trending in the world. Such is the situation in case of drugs.

Pharmaceutical drugs are classified into the following groups that have the same kind of chemical structure, mechanisms of actions, mode of action of the same type of drugs, etc. The Anatomical Therapeutic Chemical Classification is the most popularly used drug classification system. It assigns a unique code or the ATC code to each drug. The ATC code is an alphanumeric code. It assigns that specific drug within the ATC system.

Another essential classification system that is widely used for drug classification is the Biopharmaceutics Classification System. This system classifies the drugs according to their solubility and permeability or absorption properties.

There are also different kinds of drugs. Among them, Psychoactive drugs play an essential role. It consists of chemical substances that are very harmful to the human body. It has a high chance to affect the function of the nervous system of a human being. These drugs can affect one’s stability of mind, inflict mood swings, etc.

These psychoactive drugs have a significant impact on people. These drugs mainly consist of depressants, antidepressants, hallucinogens, etc. and have been proven extremely useful. It has also gained huge success in treating mental disorders around the world. The drugs that are used in a wide variety in the world are caffeine, alcohol, nicotine and many more. These drugs are considered to be recreational drugs. Recreational drugs refer to the drugs that are consumed for pleasure and not for medical purposes.

Abuse of such psychoactive drugs can turn out to be very dangerous to the entire humankind. It can cause psychological or physical addiction. All these drugs have tremendous side effects; these side effects can later give rise to several diseases.

Thus, the government has come up with strict rules and regulations regarding the production of these drugs. This industry is closely supervised, so the smuggling of drugs can be reduced as much as possible.

It is our duty as responsible citizens of our country not to misuse the drugs as it will cost us our lives and follow the rules and regulations of the government appropriately. If we see any such crime, we should immediately report it to the nearest police station.

Thank you, everyone, for your patience and for giving an earful to my speech. I hope everyone has a great day ahead. 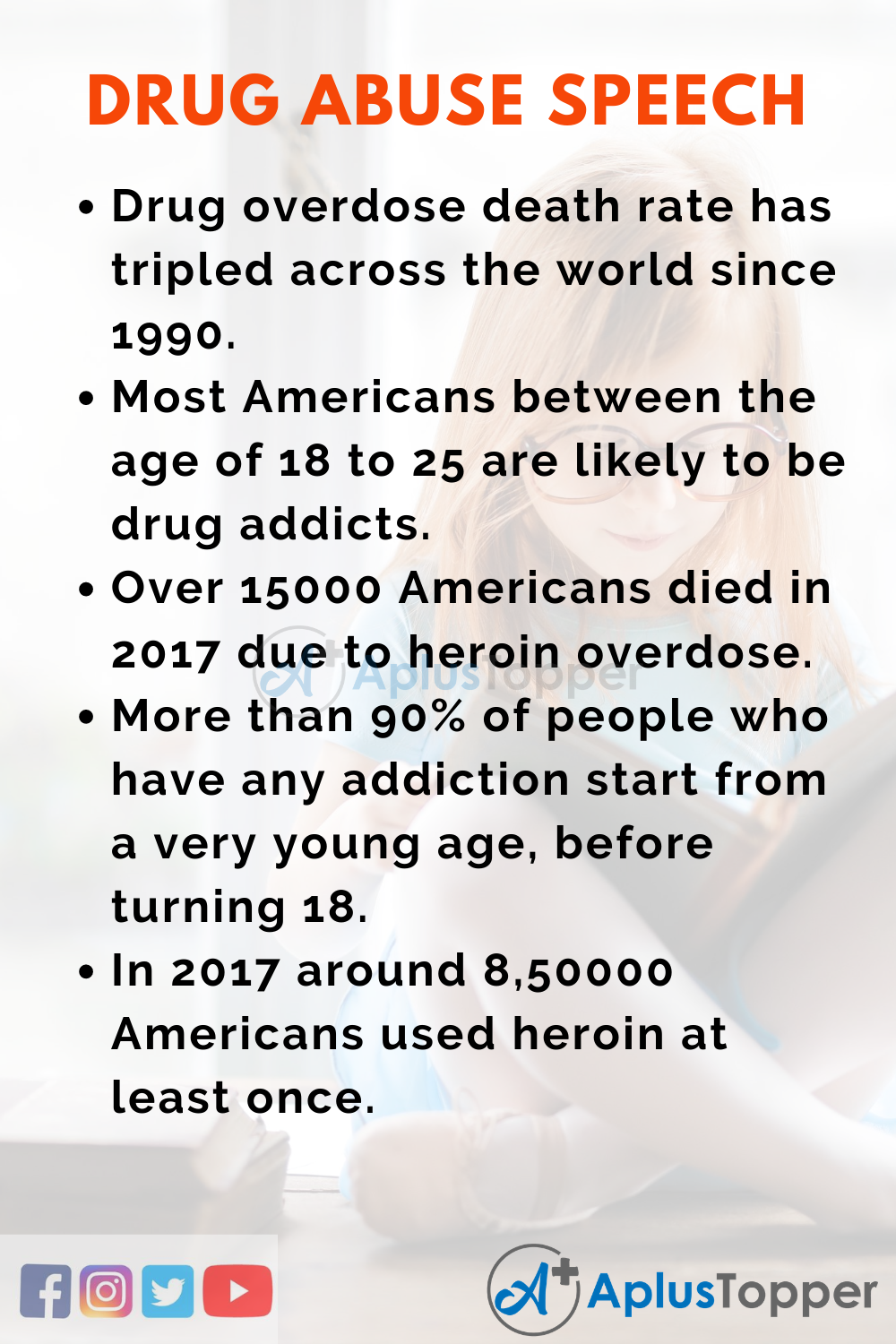 Good morning and welcome to everyone present here. I am here today to give a speech on ‘Drug abuse’.

The drug is not the kind of word that has an outstanding reputation of its own. It is mostly associated with spoiled teenagers or rich kids with a lot of money.

In reality, the drug has many positive sides. It is known to serve as medicines or medication of many chronic diseases. There are many kinds of drugs that help in the treatment of mental illness, depression, etc.

It can be proved to be equally harmful if it is consumed without the medical advice of a professional. It will not take long to convert the consumption of drug from an option to an addiction.

Thus, it is essential we maintain the balance and not consume drugs to destroy our own lives.

With this, I mark the end of this speech, thank you. 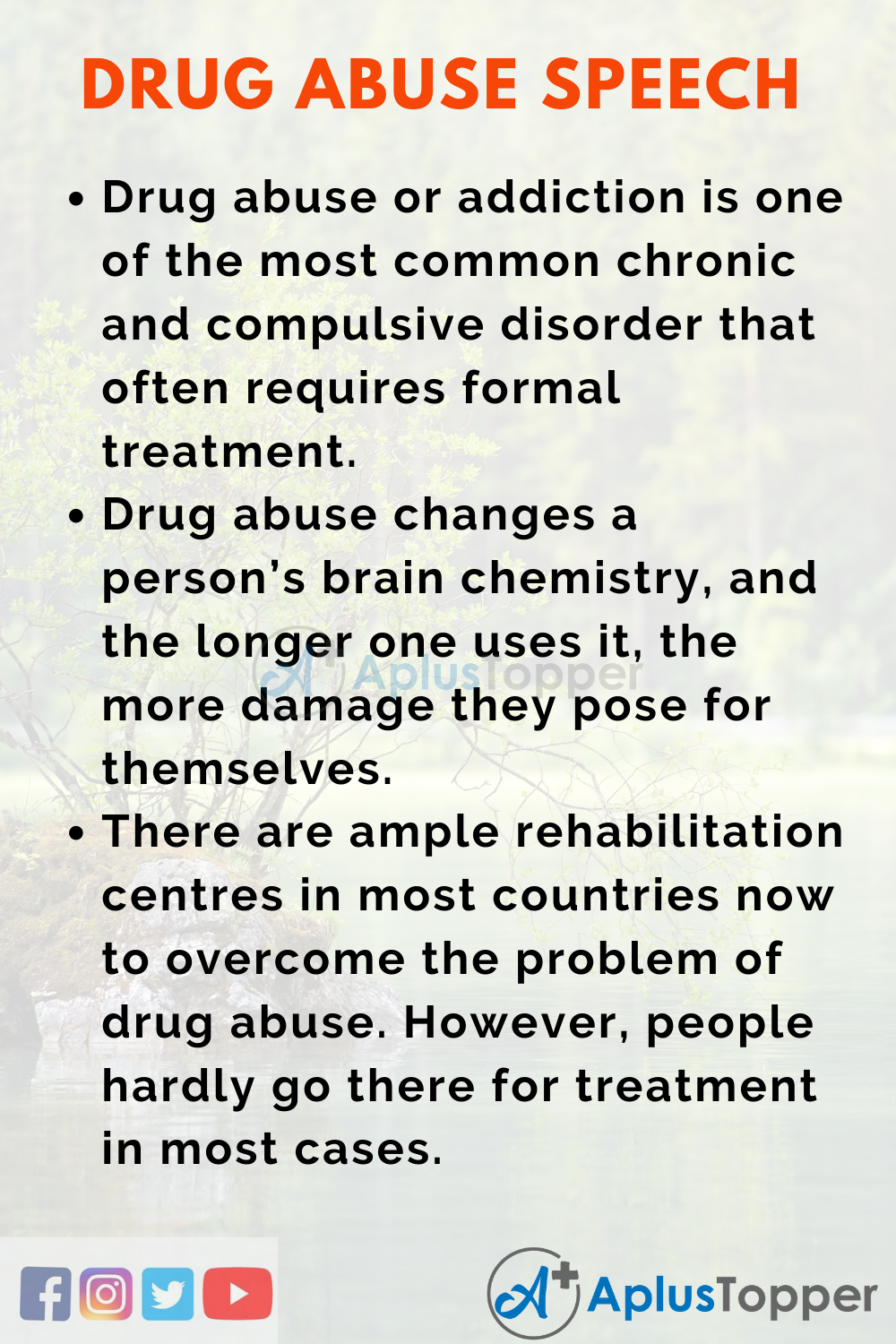 Question 1.
What is the function of NIDA (National Institute on Drug Abuse)?

Answer:
NIDA is one of the most famous scientific research institutes under the U.S department of health services. The institute addresses essential issues about drug abuse, drug trends etc.

Question 2.
Where can I get data on drug overdose?

Answer:
Data on drug overdose, addiction can be availed from various agencies such as NIDA in case of the U.S where they annually maintain reports od drug abusers.

Question 3.
Why do drug users keep using the drug?

Answer:
Being exposed to drugs for a very long time changes the brain’s power to get control over decisions, thus making it difficult to abstain from drug use.

Question 4.
What is drug addiction/abuse?

Answer:
Drug abuse is a chronic disease that changes brain circuits and is also responsible for other behavioural changes. Quitting drugs is one of the main problems of drug abuse as even with the strongest of opinions people fail to do so.