Sociology Essay: Sociology is a subject that covers vast sub-topics under it. The study of the society, the social changes, social lives and social causes is what is known as sociology. The word sociology has been derived from a Latin and Greek word. In layman terms, sociology means understanding human behaviour.

Auguste Comte, a French philosopher, is known as the Father of Sociology. The study of society has become an integral part of our lives and cannot be escaped. Sociology is important to understand why society functions the way it does and the relationships within it.

Sociology, to be put simply is the study of society, but once we go a little in-depth, it is not just that. Sociology covers the study of social lives, social causes and social changes. Sociology also means an understanding of human behaviour. Sociology stands amongst the sciences and falls under the category of general science. It is called a science as it involves the process of observation, verification and investigation. Sociology being a hybrid word, has been derived from the Greek and Latin words. The word has been derived from the words ‘socius’ meaning companion and the suffix ‘-logy’ meaning ‘the study of’.

Sociology is an extremely enlightening field of study, both on personal levels and communal levels. Social consequences and social causes of romantic love, family conflicts, racial and gender identity, religious faith, etc. are discussed in personal fields of sociology. Matters like poverty, wealth, law, crime, education, etc. are the topics that are discussed in the levels of societal sociology.

A French philosopher, August Comte, established the sociological studies and established it as a medium of study. Hence, he is called the ‘Father of Sociology’. Inspired by Auguste Comte, another French theorist names Saint-Simon coined the term sociology. He is also the founder of positivism, which is a topic that falls under the sociological studies and covers the three steps of verification, experimentation and observation. He established his theories on positivism through his book ‘Positive Philosophy’ (1839).

Sociology has its roots in philosophy and western knowledge. Sociology has such old roots that some of the earliest traces of sociology can be found in medieval Arabic writings. Hence some consider Arabic-Islamic scholar Ibn Khaldun of the 14th century from Tunisia to be the Father of Sociology although there is no solid evidence of his works.

Karl Marx denied Comte’s philosophy of positivism but set out to establish a ‘science of society’ and became an integral part in the establishment of sociology.

Albion Small in 1892 established the first formal Department of Sociology in the world in Chicago. However, it was Emile Durkheim who developed the institutionalization of sociology as an academic discipline. Durkheim also developed the theories of positivism although he disagreed with most of Comte’s theories.

Modern Sociological structure is mostly derived from conflict (Weber and Marx), and functionalist (Durkheim) approaches of social structure. Structural functionalism implies that everything within the system is a necessary function for the whole. Cohesive systems by functionalist theorists are contrasted with conflicting theories.

Sociology is highly dependent on the social structure of society. Everything related to society falls under sociology, starting from a small behaviour on how you sit at certain places.

Thus, we can say that sociology as emerged over the years as an important discipline which is an important response to the challenge of modernization. It is a social science-based of interaction between humans and the various processes that change them. Henceforth, sociology is regarded as one of the highest levels of sciences and is a subject that cannot be escaped. 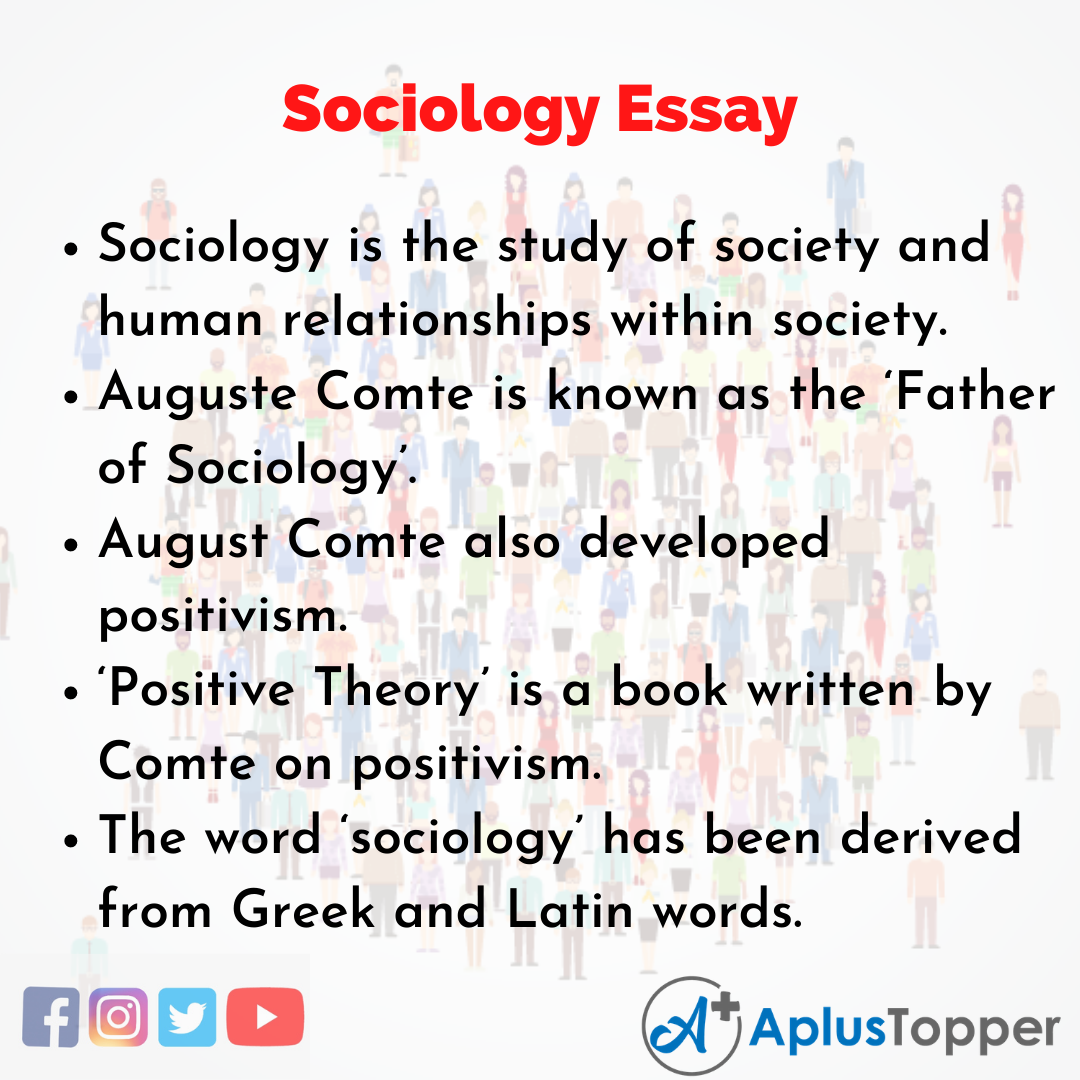 Sociology is basically what is known as the study of society and human interaction within society. It is known as a general science as it follows processes of verification, observation and investigation.

Auguste Comte, a french philosopher, is known as the ‘Father Of Sociology’. He not only established sociology as an institution but also developed his theory of positivism. Emile Durkheim is another person who has immense contributions in the field sociology.

The word sociology is a hybrid word of both Latin and Greek. Sociology follows both personal and societal boundaries. Another French philosopher Saint Simon, after being inspired by August Comte, coined the term ‘sociology’.

Social stratification, social structure, religion, family, posture, wealth, poverty, etc. are all part of the social studies. Sociology, with time, has become an extremely important discipline and affects every sector of each person’s life. Sociology is a subject that one cannot escape no matter what.

10 Lines on Sociology Essay in English

1. Sociology is the study of society and human relationships within society.
2. Auguste Comte is known as the ‘Father of Sociology’.
3. August Comte also developed positivism.
4. ‘Positive Theory’ is a book written by Comte on positivism.
5. The word ‘sociology’ has been derived from Greek and Latin words.
6. The word ‘socius’ means companion and ‘-logy- means ‘the study of’.
7. Sociology is general science.
8. The general science of sociology follows the steps of observation, verification and investigating.
9. In 1892, the first department of sociology was established in Chicago.
10. Modern Sociological Structure is derived from conflict and functional perspectives. 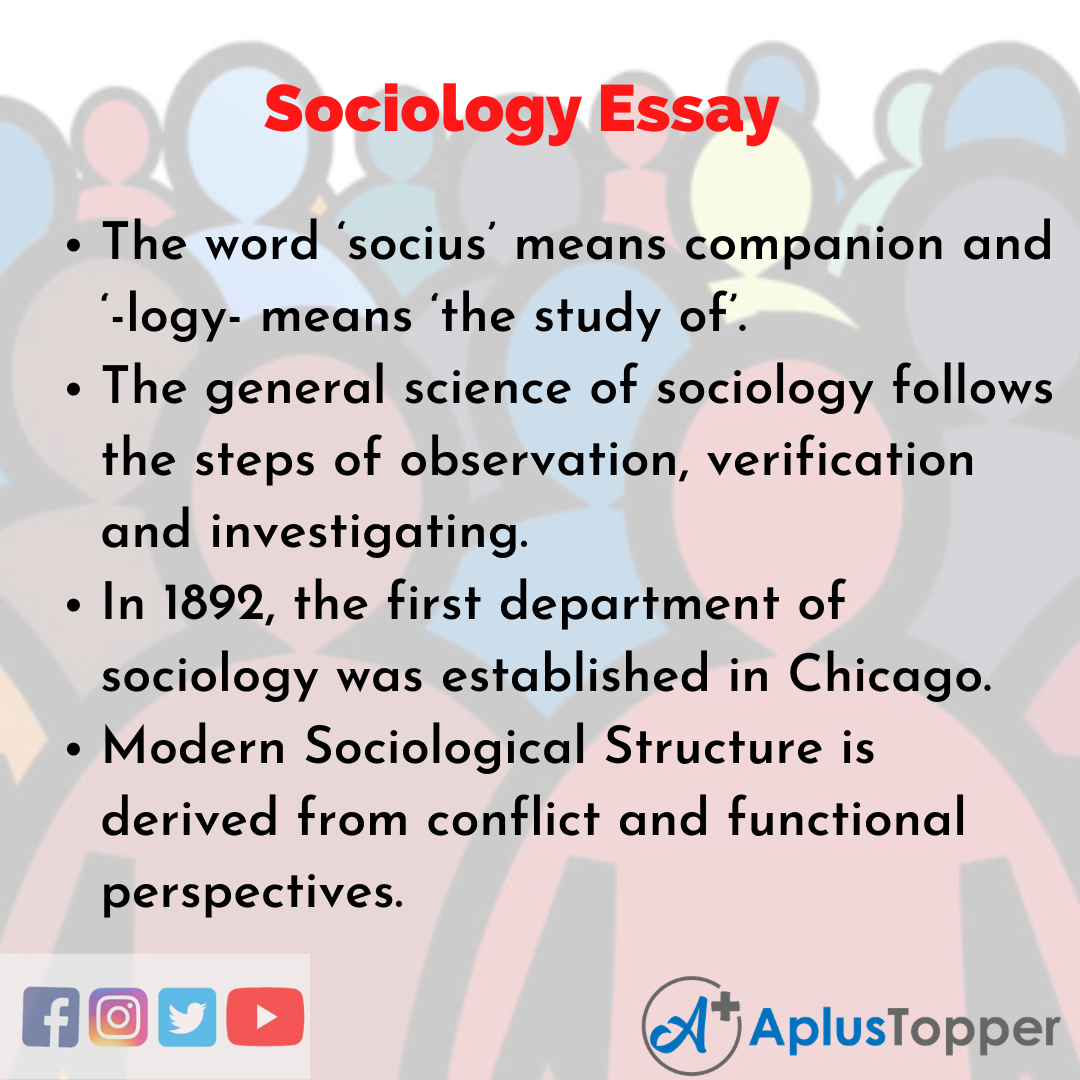 Question 1.
What is the definition of sociology?

Answer:
There is no particular definition of sociology. Sociology is the study of the societal structure and human relations within the structure.

Question 2.
Who is the ‘Father of Sociology’?

Answer:
August Comte is the ‘Father of Sociology’.

Question 3.
What is the meaning of the word ‘sociology’?

Answer:
The word ‘socius’ means ‘companion’ and ‘-logy’ means ‘the study of’.

Question 4.
When was sociology introduced as part of the academics?

Answer:
In 1892, the first department of sociology was introduced in Chicago.