It requires us to think ourselves away from our everyday routines and look at them anew. Sociological Imagination helps us to improve our thought process by seeing the world from many perspectives.

We are providing essay samples on a long essay of 500 words and a short essay of 150 words on the topic of Sociological Imagination for reference.

Long Essay on Sociological Imagination Essay is usually given to classes 7, 8, 9, and 10.

American sociologist C. Wright Mills first created the concept of sociological imagination. He named that term also. He wrote the definitive book about it in 1959 called “The Sociological Imagination.” He defined the sociological imagination as “the vivid awareness of the relationship between experience and the wider society.” Mills’s goal was to try to reconcile two different and abstract concepts of social reality—the “individual” and “society.”

When Mills’s first book was published, Mills’s work was not well received at the time. As a result of his professional and personal reputation—he had a combative personality. Today, the Sociological Imagination is one of the most widely read sociology books and is a staple of undergraduate sociology courses across the United States.

Sociological Imagination encourages people to replace the lenses they’re currently using to view their own lives and alter their perspective. Mills encourages every member of society to give up boxing their private conditions into isolated corners and open up to the world’s broader panorama.

Three components form the sociological Imagination. First, history: how a society came to be and how it is changing, and how history is being made in it. Second, Biography: the nature of “human nature” in a society. And last, Social Structure: how the various institutional orders in a community operate, which ones are dominant, and some rules and regulations of organization.

We can utilize the concept of sociological creativeness for any behaviour. Let’s take the easy act of drinking a cup of coffee. We ought to argue that coffee is no longer just a drink; however, it has symbolic value as a section of day-to-day social rituals. Often the ritual of ingesting coffee is lots of extra essential than the act of drinking the espresso itself.

For example, two human beings who meet “to have coffee” together are likely more interested in meeting and chatting than in what they drink. In all societies, consuming and drinking are events for social interplay and the overall performance of rituals, which provide a fantastic deal of concern matter for sociological study.

The most frequent instance of the sociological creativeness pertains to unemployment. An individual facing unemployment might feel defeated, depleted, and discouraged. At that time, that person can blame himself for his failure. But from another point of view, he needs to think that it’s not only his fault, but it’s the fault of others too. 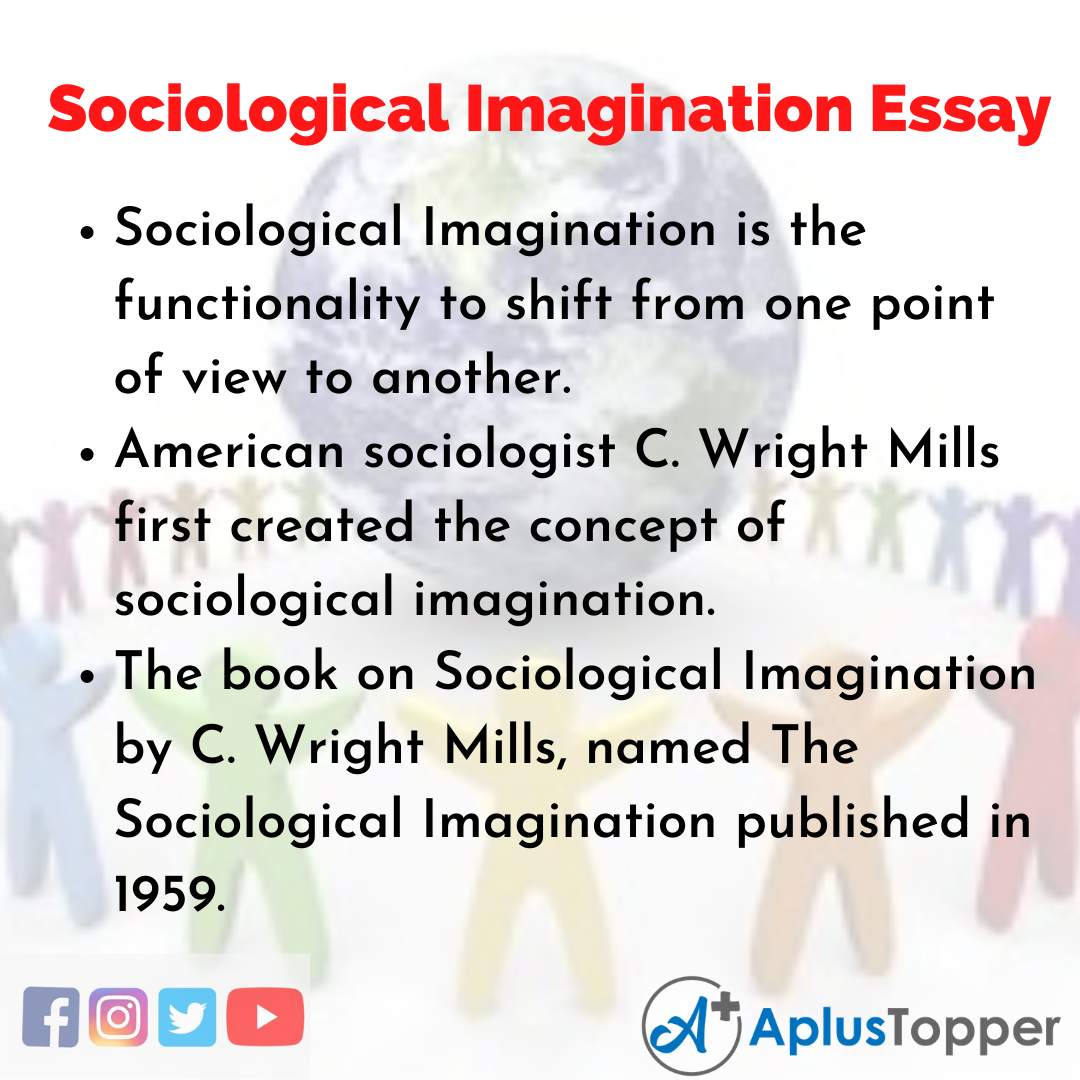 Nowadays, we judge people for no reason. We tag them with any social term or definition. We don’t even think of their perspective or their point of view. The sociological Imagination is an outlook on life that tries to break away from the monotony of daily life.

Three components form the sociological Imagination—first history: how a society came to be and how it is changing. Second, Biography: the nature of “human nature” in a society; what kind of people inhabits a particular society. Last, Social Structure: how the various institutional orders in community operate, which ones are dominant,

Through sociological Imagination, we can see what is real and what could become real should we desire to make it that way. 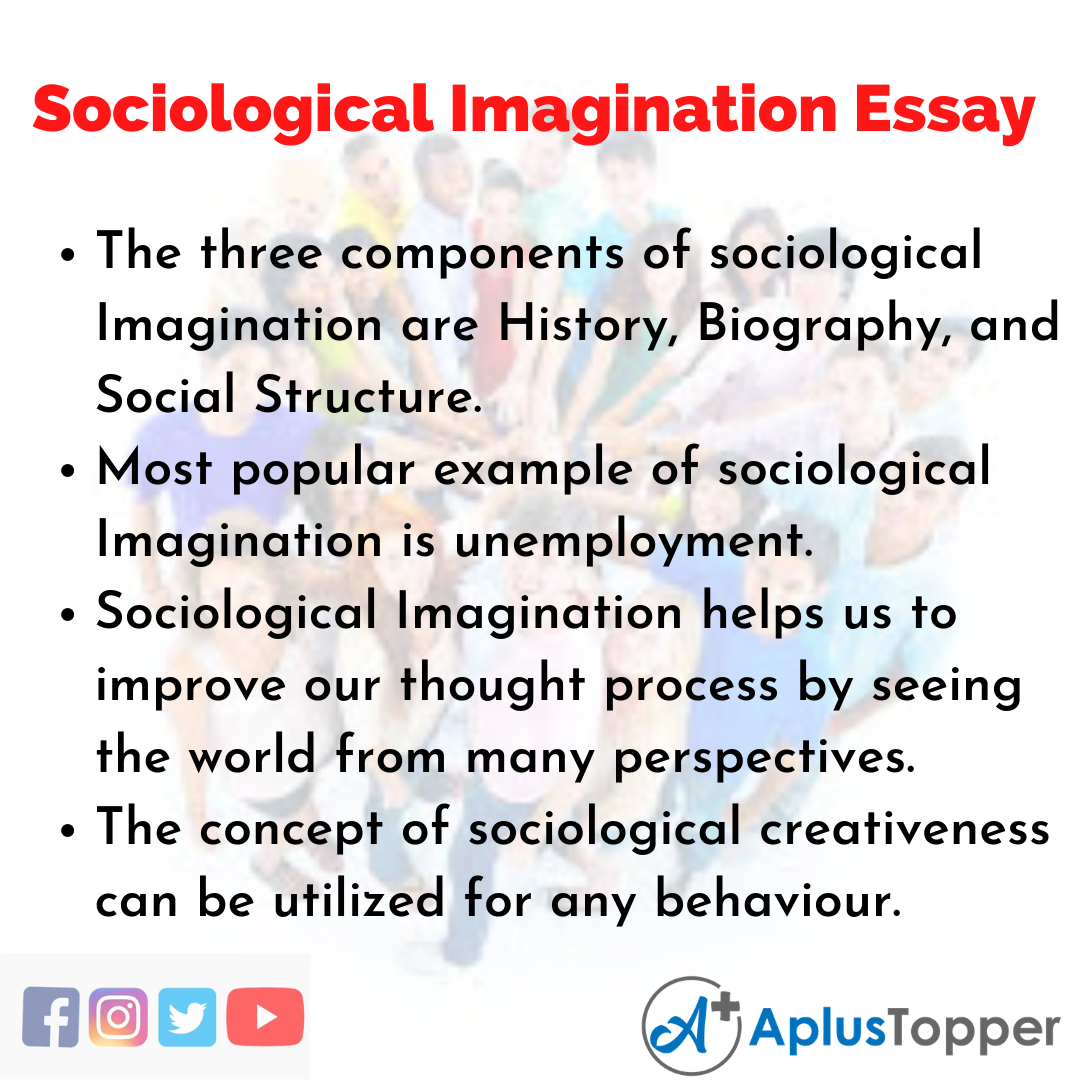 Question 1.
How does the sociological Imagination affect our lives?

Answer:
The sociological Imagination enables you to look at your life and your issues and relate them to other people, history, or societal structures.

Question 2.
What are the examples of social impacts a business can create?

Question 3.
Why is sociological Imagination important?

Answer:
The sociological Imagination enables us to think about others’ life with another view of point. It helps to judge any consequence or any situation.

Question 4.
Is divorce a social problem?

Answer:
Divorce is a complex process that can be viewed from different perspectives. It may unsettle couples economically, abuse mentally, and affect their status in society.