Smoke Essay: Smoke is a collection of airborne gases and particles. These are emitted when a material undergoes pyrolysis or combustion along with the quantity of appropriated or mixed air into the mass.

Smoke is an unwanted by-product of fires from stoves, oil lamps, candles, internal combustion engines, and fireplaces. Smoke inhalation serves as the primary cause of death of people who are victims of indoor fires. The constitution of the smoke depends on the nature of burning fuel.

We provide students with essay samples on a long essay of 500 words and a short essay of 150 words on the topic Smoke for reference.

Smoke is a collection of minute solid, liquid, and gaseous particles. Even though smoke can consist of hundreds of various chemicals and fumes, visible smoke is mostly consisting of carbon or soot, oils, tar, and ash.

Smoke is an undesirable by-product of fires but is also used for communication as smoke signals and pest control in fumigation. It also has defensive and offensive military capabilities as a smokescreen, smoking tobacco and cannabis or cooking. It is a part of rituals where incense, resin, or sages are burned to produce a smell for a magical or spiritual process.

Inhalation of smoke is the chief cause of death in victims of indoor fires. Nearly 75% of home fires victims lose their lives because of the effect that the smoke has on them rather than the fire.

Inhaling smoke even for a short period can cause immediate and acute effects on the individual. Smoke cause irritation to the eyes, nose, and throat, and the odour that it has maybe nauseating to some. Studies have some lung function changes in some people exposed to smoke, making breathing difficult.

Smoke is primarily composed of water vapour, carbon dioxide, carbon monoxide, hydrocarbons, particulate matter, and other organic chemicals such as the trace of minerals, nitrogen oxides, and several other compounds. Fuel type, the fire’s temperature, and the condition of the wind determines the composition of the smoke.

Smoke can be extremely toxic and irritating, and it also contains flammable compounds, which with an increase in oxygen, can ignite either through open flames or by their temperature. This leads to a flashover or backdraught effect.

Smoke inhalation can be deadly for a person depriving people of oxygen. Combustion can either use up the oxygen near a fire, leaving no oxygen to breathe. Smoke also contains carbon monoxide, which further limits the amount of oxygen in the air causing harm to the person by asphyxiating. Combustion can also form a chemical that injures the skin and mucous membrane.

Compounds produced due to combustion can cause cell damage in the body by interfering in the delivery or use of oxygen. Visibility is also obscured by smoke, making it difficult to evacuate from a fire. Disorientation and panic of people who get held in a fire, which is why people become unable to find a way out – which serves as a cause of death for many. 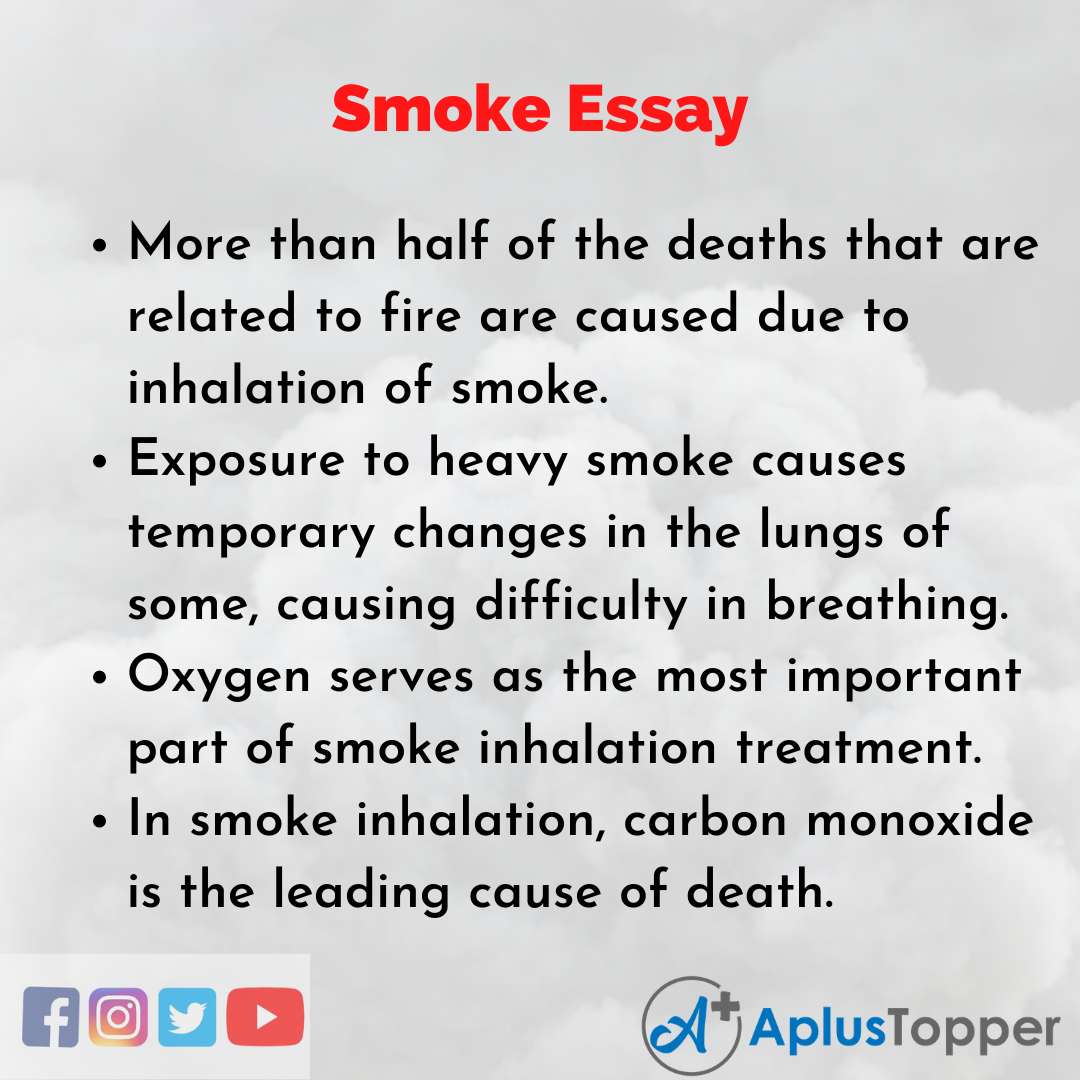 Smoke is a product of incomplete combustion, consisting of fine particles of carbon carried by hot air and gases. Smoke is a collection of minute unburnt particles, and each particle is too small to be seen by the eyes, but when they come together, they are visible as smoke.

Smoke from oxygen-depleted fires contains a significant concentration of explosive compounds. It is a cloud of smoke, coming in contact with atmospheric oxygen can be ignited either by its temperature or another open flame in the area. Inhalation of smoke is also a health hazard causing serious injury and sometimes even death. Many compounds of smoke consisted of fires are highly toxic and irritating.

The most threatening of them is carbon monoxide causing carbon monoxide poisoning. Hydrogen cyanide and phosgene sometimes add to the effects. Smoke inhalation can rapidly lead to incapacitation and loss of consciousness.

10 Lines on Smoke Essay in English

1. More than half of the deaths that are related to fire are caused due to inhalation of smoke.
2. Exposure to heavy smoke causes temporary changes in the lungs of some, causing difficulty in breathing.
3. Oxygen serves as the most important part of smoke inhalation treatment.
4. In smoke inhalation, carbon monoxide is the leading cause of death.
5. Carbon monoxide poisoning is treated by hyperbaric oxygenation (HBO).
6. The composition of smoke depends on the fuel type, wind conditions, and temperature of the fire.
7. Being exposed to severe smoke can cause wheezing, blue lips or fingernails, increased or rapid heart rate.
8. It is suggested to test the smoke and carbon monoxide detectors monthly, replacing batteries every year.
9. Smoke can cause more damage to any building than the heat or flames of the fire.
10. The initial colour of smoke is grey – smoke is carried away, and smoke particles drop – and eventually, the smoke turns white. Question 1.
What are diseases caused due to smoke inhalation?

Answer:
Inhalation of smoke can worsen heart and lung conditions and has a higher risk of permanent damage in diseases such as asthma, chronic bronchitis, chronic obstructive pulmonary diseases, and emphysema.

Question 2.
What are some symptoms of smoke inhalation?

Answer:
Shortness of breath, coughing, headache, chest pain, eye damage, soot in the nose and throat, and decreased alertness are some symptoms of smoke inhalation.

Question 3.
How is a person diagnosed for smoke inhalation?

Question 4.
How does leads to the death of a person?

Answer:
Smoke slowly kills a person by a combination of thermal damage, poisoning, and pulmonary irritation caused by hydrogen cyanide, carbon monoxide, and other products of combustion.