Slogans on Wildlife Conservation: Animals that are undomesticated and thrive in the wild come under the category of wildlife. They hold much importance as they provide balance to the environment, act as a gene pool and also have cultural and recreational importance. The wildlife tourism helps boost the economy of the country as well.

The main threat to wildlife comes from pollution and its corresponding habitat destruction. Wildlife poaching has also increased tremendously than what it was a few years back. Culling in the name of control also causes much threat to many species, like that of sharks in Australia.

Slogans on Wildlife Conservation in English

For the conservation of wildlife species several organizations like World Wildlife Fund, the Wildlife Conservation Society have come up. They aim to reconstruct the destroyed habitats and also look forward to raising awareness for protecting wildlife.

These organizations, with the help of the government, have established the Endangered Species Act, to protect wildlife. With the help of eye-catching slogans the movement to save these beautiful gifts of nature could be more intensified. 1. If you like to shoot animals, do it with a camera, not a gun. Our wildlife needs our help.
2. The lifecycle of every specie is intertwined. Today you are hunting them, and tomorrow they will haunt you.
3. We must take every measure to protect nature’s treasure. The lives in the wild are nature’s greatest gift to us.
4. Fur looks good on minks, not on you. Discard clothes of fur, and you will save numerous lives.
5. We will quickly perish if we fail to cherish; nature and its inhabitants are more valuable than your recreation.
6. Would you like it if an elephant comes to your home, stampedes over it, finally kills you and takes your teeth?
7. You clearly show the world who the real animal is when you kill wildlife. Realize this, that no wildlife means the death of human life as well.
8. Animals are not only those living in the wild. At times they live among us and have human skin too.
9. Skins and tusks look good when animals wear them; not when the walls of your home wear them.
10. Your one fur coat kills hundreds of squirrels and up to twelve seals. Their death is on your hands. Still up for it?
11. Please do not get fooled by your need; it is greed. Realize your mistake early, and there is still some time.
12. Our fashion statement cannot be justified by cruelty to animals. We are not the only species surviving on earth. Today it is them, and tomorrow it will be you.
13. Would you still call shooting a sport if it is you on the other side of the gun? Your idea of fun is a death sentence for many innocent animals.
14. A sport is one activity when both sides agree to play. Not when one side dominates over the other by taking lives. The animals did not agree to this.
15. Instead of neglecting, why don’t we start protecting? Let us pledge to rescue and take care of the wild. 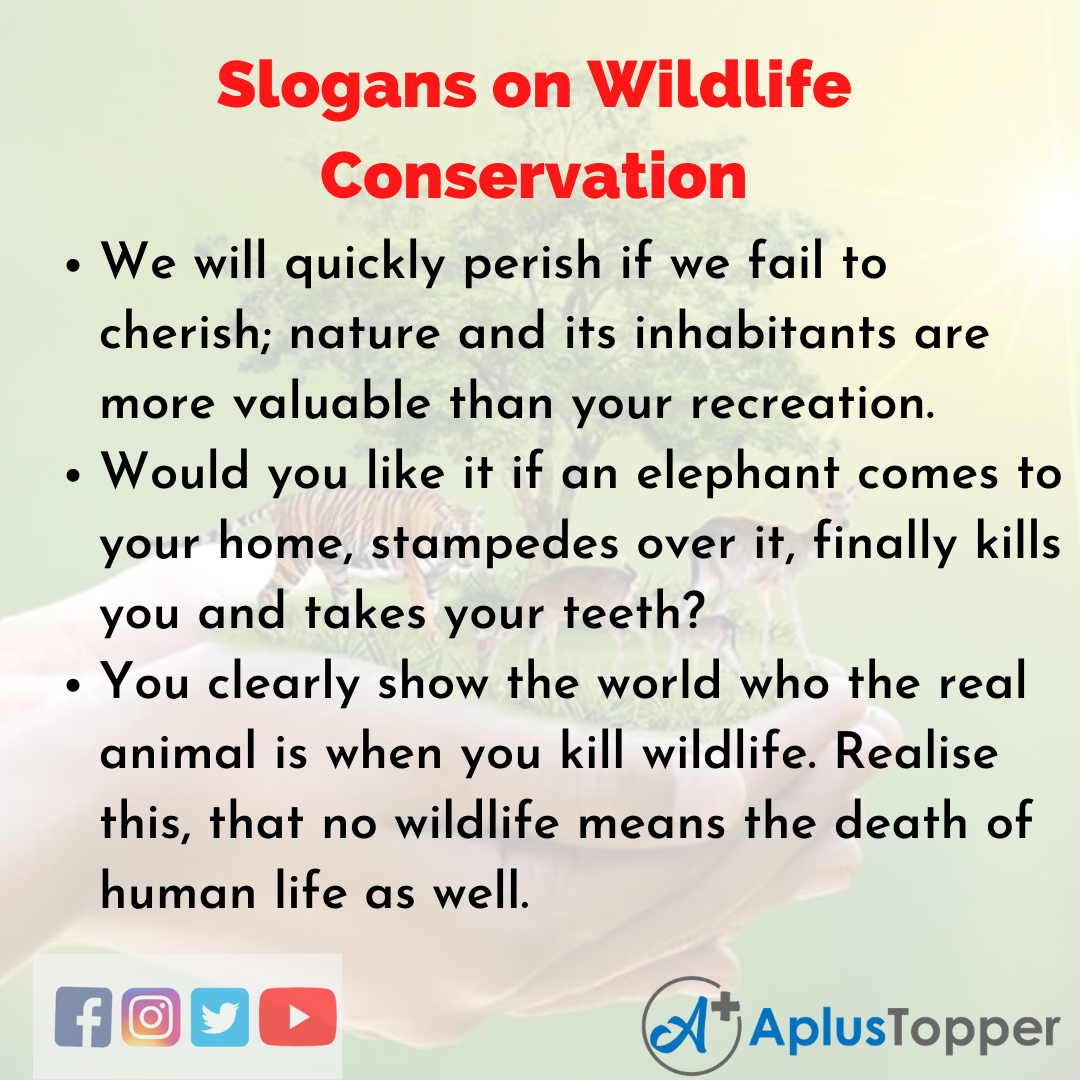 Question 1.
Are there any international efforts to take care of the wild?

Answer:
Several international organizations have sworn to act for the protection of wildlife. There is the World Wildlife Fund, which works for conserving the diversity on the earth. It aims to boost up ecological footprint as well. International agreements like CITES or Convention on International Trade in Endangered Species of Wild Fauna and Flora have also worked in favour of wildlife protection.

Question 2.
Which are the animals that face poaching?

Answer:
Poaching is an illegal activity where people kill wild animals for trade. The ivory tusks of elephants make them a target for poachers. Pangolins, animals that essentially are anteaters, are a target for their scales. Animals like snakes, apes, deer, tortoise are targeted for their meat. Even for recreational purposes, some animals are targeted, like birds, reptiles. These are captured live and are kept as pets.

Question 3.
What are the animals that have gone extinct from Indian forests?

Answer:
In India, mainly, animals like Tigers and Rhinos are targeted the most. The Sumatran rhinos are considered to be critically endangered, and their current numbers are around 300. At the same time, many animals like quails and pink-headed ducks have left the forests forever since the 1870s. The Javan Rhinos are another species to have gone extinct. Asiatic Cheetah has also vanished from India and is rendered critically endangered as it is now only visible in Iran.