Slogans on Animals: The term animal can be defined as a member of the kingdom Animalia. A multicellular body typically characterizes animals, specialized movement, specialized sense organs, have a response to the factors of the environment and have the ability to acquire and digest food.

Even though there are a few exceptions animals consume organic matter, breathe oxygen, are mobile and reproduce sexually. Animals have complex interactions among each other and with their environment forming intricate food webs. Zoology is the scientific study of animals. Animals are classified under sevens primary levels of classifications Kingdom, Phylum, Class, Order, Family, Genus and Species.

Slogans on Animals in English

Slogans are one-liners that have the motto of influencing the audience positively. Animals form an intricate part of the eco-systems rand it is essential to learn about them and their various types. Here we are providing fifteen slogans to educate the targeted audience about animals and their importance.

These slogans are informative and adequate to give proper knowledge about the topic. These one-liners intend to affect the readers. 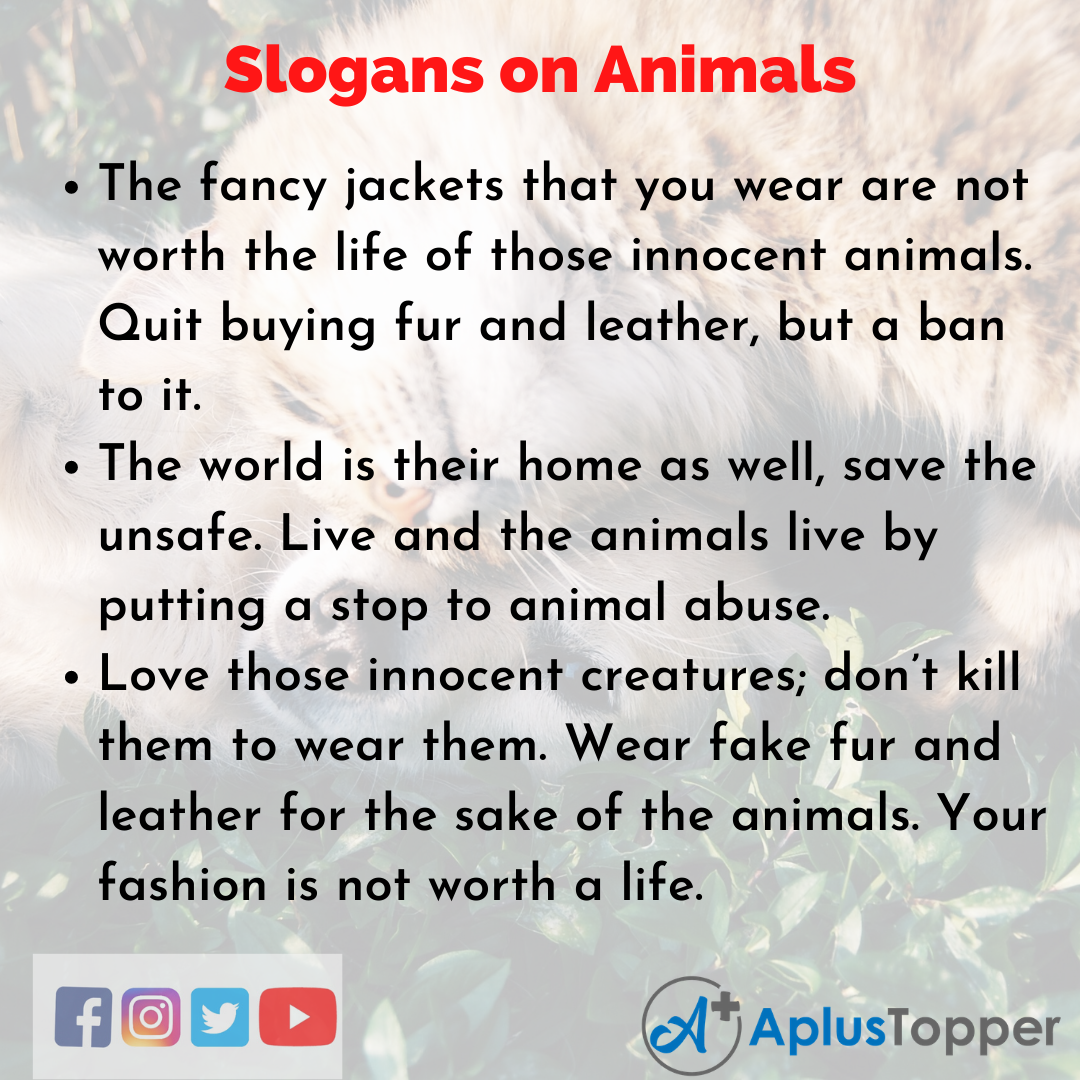 15 Unique and Catchy Slogans on Animals

1. The fancy jackets that you wear are not worth the life of those innocent animals. Quit buying fur and leather, but a ban to it.
2. The world is their home as well, save the unsafe. Live and the animals live by putting a stop to animal abuse.
3. Don’t cage the animals in a zoo; rather age the humans to abuse animals.
4. Love those innocent creatures; don’t kill them to wear them. Wear fake fur and leather for the sake of the animals. Your fashion is not worth a life.
5. Give meaning to the word ‘kind’ in ‘mankind’; stop caging the innocent animals for the entertainment of humans. Say no to abuse.
6. Researches have proved that animals experience the same range of emotions as we humans do.
7. When you are looking for a pet, why not adopt an animal that is waiting in a shelter for a home rather than purchasing them.
8. Saving one animal will not help in changing the world, but saving that one animal will change that animal’s world.
9. The scientist has found evidence – through indirect ways as it is not possible to observe another creature directly – in favour that mammals and birds do see dreams when they are sleeping.
10. Wildlife is the greatest gift that Mother Nature has given us. It is our responsibility to take to respect and protect what we have been gifted. Many species, one Earth, one opportunity, one future.
11. There are many species on this planet that have become endangered. Let’s save them before it gets too late, and they become extinct. Can’t we do anything to protect these innocent lives?
12. By caging the innocent, you are cruel. Start caging the cruelty, not the animals. Treat the speechless with kindness.
13. The animals don’t have any voice, and it is you who has to stand up for them, be vocal and save them. Big or small, let’s take the initiative to save them all.
14. Animals have souls and are believed to be a part of the life-death-rebirth cycle just as humans.
15. Save our majestic striped friends, don’t strip them apart. Save the tigers before they vanish. Question 1.
Which are animals that are considered to be the smartest?

Answer:
The following are considered to be the smartest animals in the world.

Question 2.
What are endangered animals or species?

Answer:
Endangered species is a species that is under the threat of becoming extinct in the near future that can be either worldwide or a particular political jurisdiction. Endangered animals may be at risk due to factors such as invasive species, habitat loss or poaching.

Question 3.
What are animal rights?

Answer:
Animal rights are a certain kind of considerations that animals deserve. Considerations are made on what is best for the animals, and their interest irrespective of whether they are ‘adorable’ or useful to humans, or they are an endangered species.

Animals rights is the entitlement of animals for the possession of their existence, fundamental interests such as the need for avoiding suffering – considerations should be afforded as similar to humans.