Slaves Essay: Slaves are people who are forced to work for other people and are bought and sold like objects. Slavery is injustice carried around against human will since ancient times. Historians have found slavery to be a part of every culture. Slavery not only meant that they ploughed the fields, but slaves were also from different classes of the society, due to division.

We are providing children and students with essay samples on an extended essay of 500 words and a short piece of 150 words on the topic “Slaves” for reference.

Slavery is the use of humans as an object and buys and sell them like objects. People use slaves all sorts of tasks like physical work, sexual work, etc. Slavery is one of the main reasons behind racism that exists in every culture. Slavery severely damaged the relations between America and people with dark skin.

Slavery has caused irreparable damage which still is evident from racism towards people belonging to other races and cultures. Slavery was abolished in the 1800s in America. The aftermath of it is that racial tensions remain among them. The abolishment of slavery made them drift apart. It gave rise to the thought that White people are supreme, and others are inherently inferior. It is a kind of racism that followed and still follows the event.

Human trafficking, the modern term for slavery, does tremendous damage and is one of the greatest social evils. We have still not found a way to eradicate such heinous people who operate such circles.

Hence, even though slavery is illegal for over 150 years, the scars left by it still haunt people. The enslaved haven’t forgotten their torture and the struggles of their ancestors. They still carry the resentment brought down from their ancestors.

There are instances of racism within a society that lead to inexcusable behaviour of people towards others. Such unjustifiable behaviour and actions are things like mental stress, social harassment, and even physical assaults, which are all the result of slavery.

Since slavery was implemented on people of colour, it makes them feel sorry for being born a certain way, of having a particular skin colour. Racism has no scientific explanation, and people are entirely ignorant about the feelings of other human beings. We should never judge others for the way they look for the way they speak, but slavery has instilled in many, the irrational fear or hatred of people of colour.

All people are born equal, and nothing should change that. Narrow-minded thoughts like slavery and racism should have extinguished with the increase in educated people and the intermixing of various races. Still, sadly, such behaviour is the harsh reality and shows no signs of coming to an end.

It brings shame to the human society to have allowed such a horrific activity. Millions of people are repenting for a crime that they never committed. White people are judged partially, and people of colour are seen as terrorists and judged harshly.

Slavery is a thorn in our history and has no benefits. We need to be aware of the reality that slavery has brought upon us. Slavery has only brought upon unnecessary and cruel tags for people. Let us unite and make the world a better place for every individual and stand against slavery and racism. 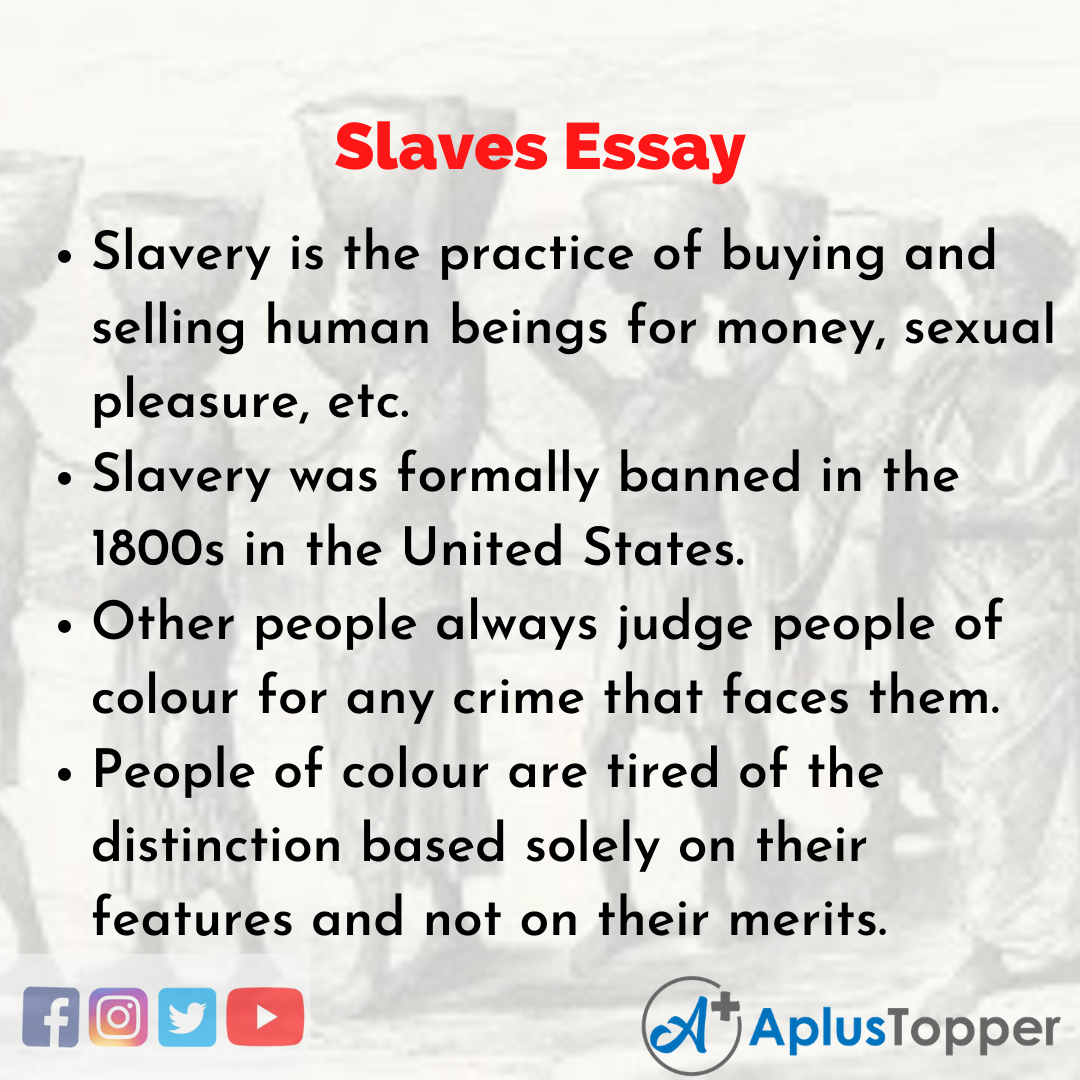 Slavery is an illegal practice of buying and selling human beings for money, physical labour, sexual trafficking, etc. It is the injustice carried against a group of people since the distant past. There is a mention of slaves in many religious texts. Hence, it is an ancient practice.

Since the Americans bought people from Africa and sold them as slaves in their native country, a misconception has grown in people that dark-skinned people are inferior to the white-skinned people and should always follow their orders.

Since the abolishment of slavery in the United States in the 1800s, the distinction between people of colour and others has not been much of an improvement. The people of colour still carry on the shame and resentment of their ancestors. White people suspect the coloured for every little crime, and the people of colour always see the white-skinned as their enemy. It is a vicious cycle which must come to an end. Let us vow not to judge people based on their skin colour or culture. Let us vow to be humans.

10 Lines on Slaves Essay in English

1. Slavery is the practice of buying and selling human beings for money, sexual pleasure, etc.
2. Slavery was formally banned in the 1800s in the United States.
3. Racism is an aftermath of slavery.
4. Other people always judge people of colour for any crime that faces them.
5. People of colour are tired of the distinction based solely on their features and not on their merits.
6. Though slavery is no longer legal, the enslaved haven’t forgotten their torture and their struggles of their ancestors.
7. The modern form of slavery is human trafficking and sex trafficking.
8. Slaves have to do all that is asked of them, without any pay, hence exploited.
9. Slavery is a barbaric practice that did no good for human society.
10. We still have to pay the repercussion of slavery-like racism and human trafficking. 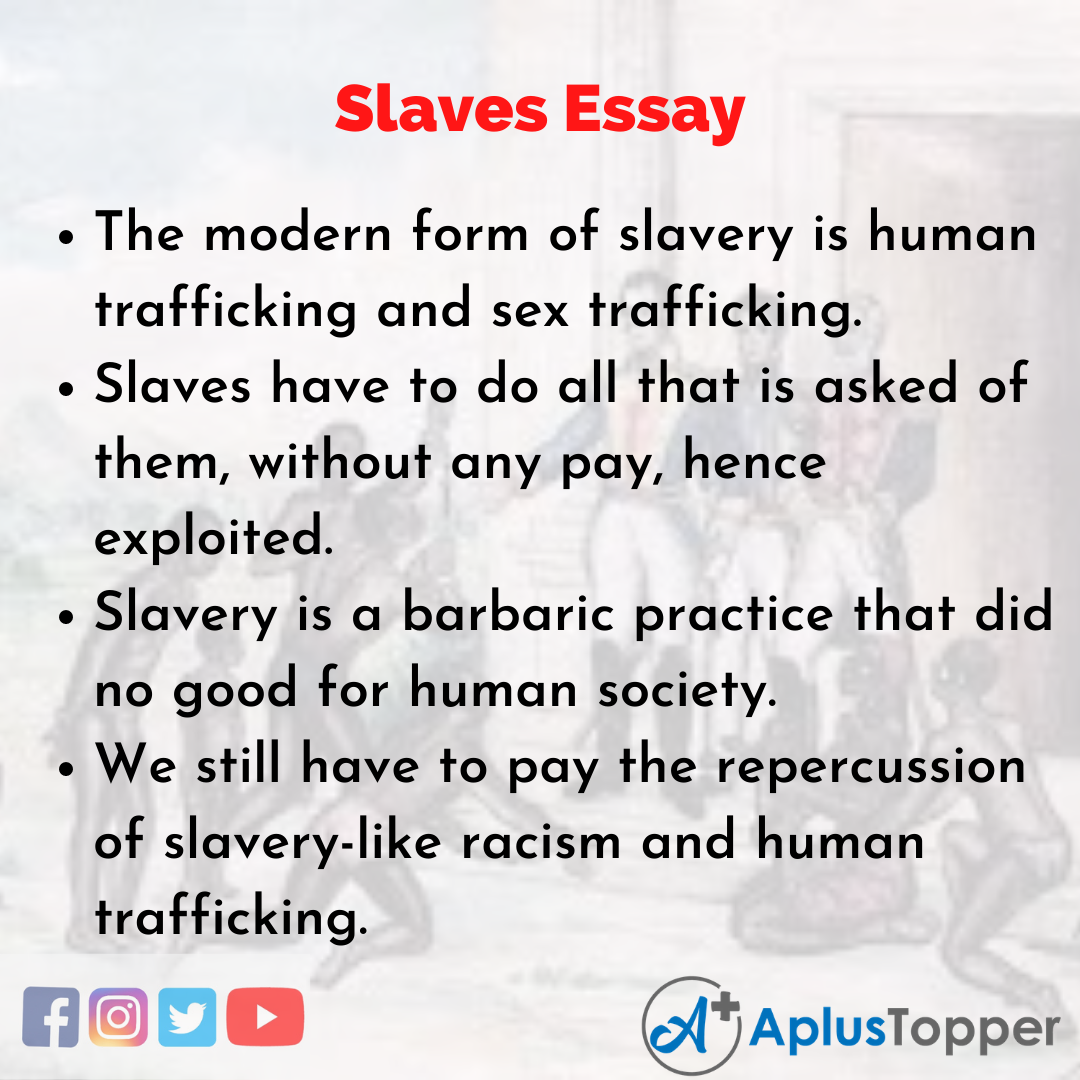 Question 1.
What is slavery?

Answer:
Slavery is the practice of selling human beings like objects for money and buying them for physical labour and sexual pleasures.

Question 2.
What is racism?

Answer:
Racism is an aftermath of slavery which spreads hate towards people simply because of their differences. It is the unjustified fear and apprehension about the other races.

Question 3.
When was slavery abolished?

Answer:
Abraham Lincoln abolished slavery is 1861. It is an illegal practice which has taken the name of human trafficking.

Question 4.
Why is it relevant to talk about slavery?

Answer:
Though slavery was abolished in the 1800s, we still are tormented by its scars. We still have to face racism, human trafficking, which are aftermaths of slavery. Hence, indirectly, we are still affected by slavery.