Shapes and Colors Vocabulary: It is a good idea to learn the shapes and colors vocabulary in English. You can improvise your communication skills with the help of colors and shapes name list. Most of us do not know the names of the colors but are familiar with them. Keeping this situation in mind we have enlisted the Shapes Name list and Colors Name list with the pictures. Scroll down this page and know the common names of shapes and colors. Some of the shapes that are discussed in this article are line, circle, arrow, semi-circle, rectangle, triangle, etc. And the vocabulary of colors is red, blue, green, white, yellow, black, navy blue, and so on. 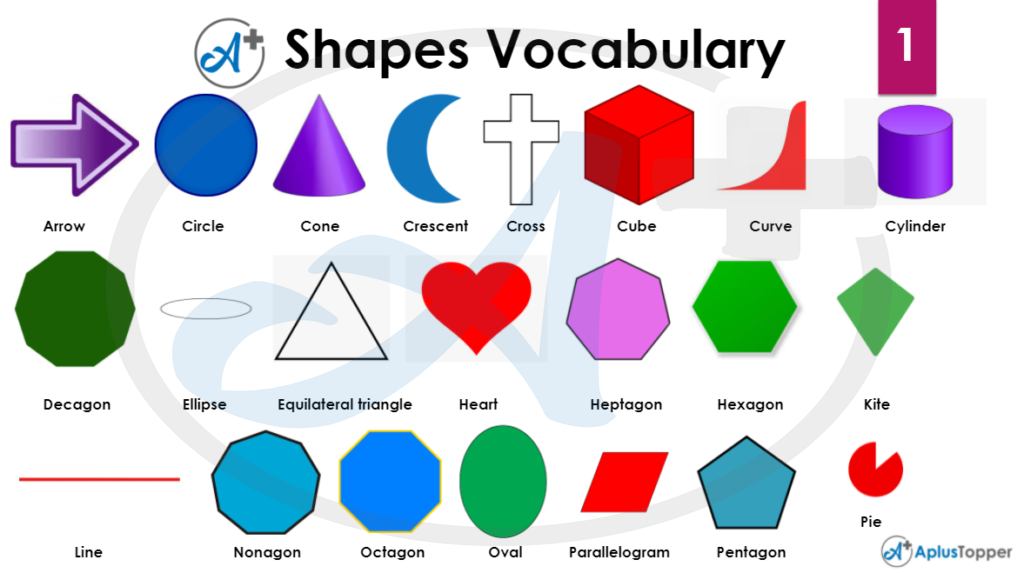 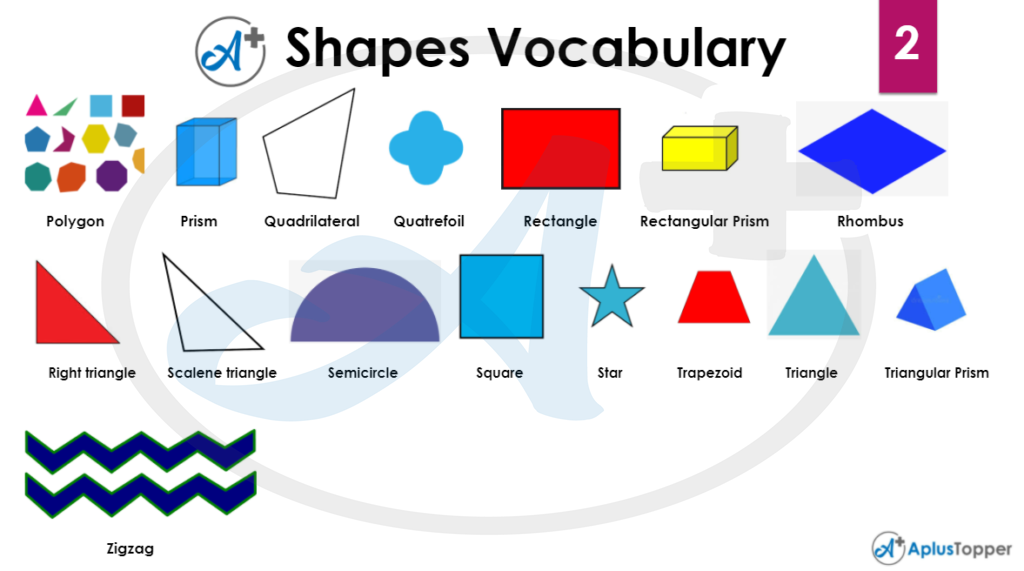 Here we have provided the list of shapes with pictures below.

Arrow is a graphical symbol used to point or indicate direction. The direction indicated by an arrow is the one along the length of the line or rectangle towards the single-pointed end.

The circle is the set of points in a plane that are equidistant from a given point. The distance from the center is called the radius and the point is called the center.

Cone is a solid or hollow three-dimensional geometric shape. The object appears like a circular or roughly circular base to a point. It is a two-dimensional object.

Crescent shape is a curved sickle shape of the visible part of the moon. Where it is less than half full. Some crescent-shaped objects are the moon, crescent ball, banana, chili, etc.

Cross is a geometrical figure consisting of two intersecting lines. The lines are perpendicular to each other or the line runs vertically and horizontally. It is in the shape of the letter x, +. 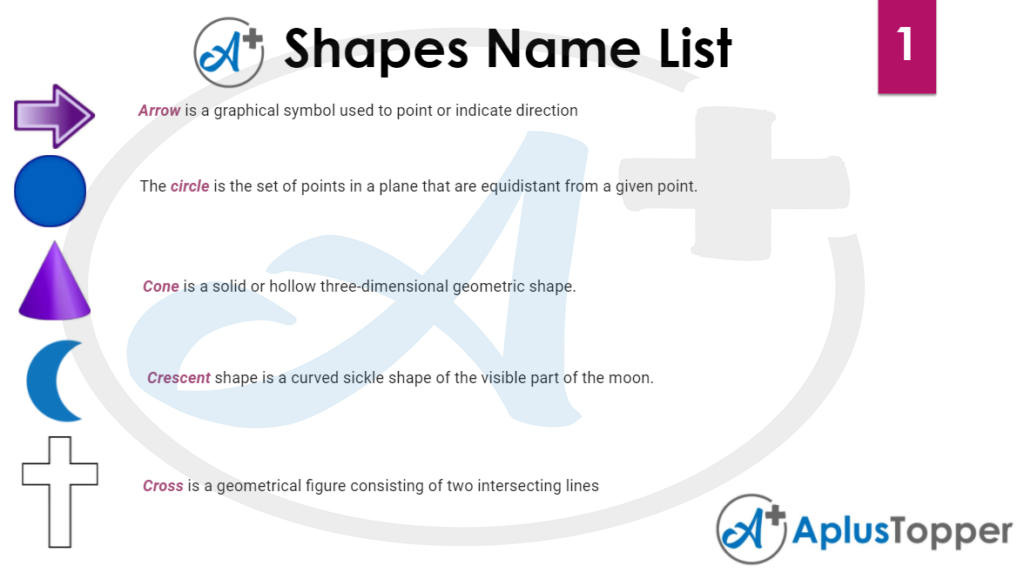 A cube is a three-dimensional solid object that has six square faces or slides. The cube is the only regular hexahedron and it has 6 faces, 12 edges, and 8 vertices.

A Curve is an object similar to a line. But it is not straight. The curve may be thought of as the trace left by a moving point. Some curves are algebraic curves, level curves.

Cylindrical is a three-dimensional solid shape consisting of two parallel bases of the cylinder is called perpendicular distance and is represented as height h.

The decagon shape is with ten straight sides and ten angles. All the sides and angles are equal. It is known as a ten-sided polygon or ten-gon. Decagons can be commonly seen in various things like umbrellas and drums.

Ellipse shape is similar to the circle that has been stretched in the direction. It also looks like an oval but it is not oval. An example of an oval shape is baseball.

An equilateral triangle is a triangle in which all sides and angles are equal in length. It is also known as a regular polygon so it is also referred to as a regular triangle. 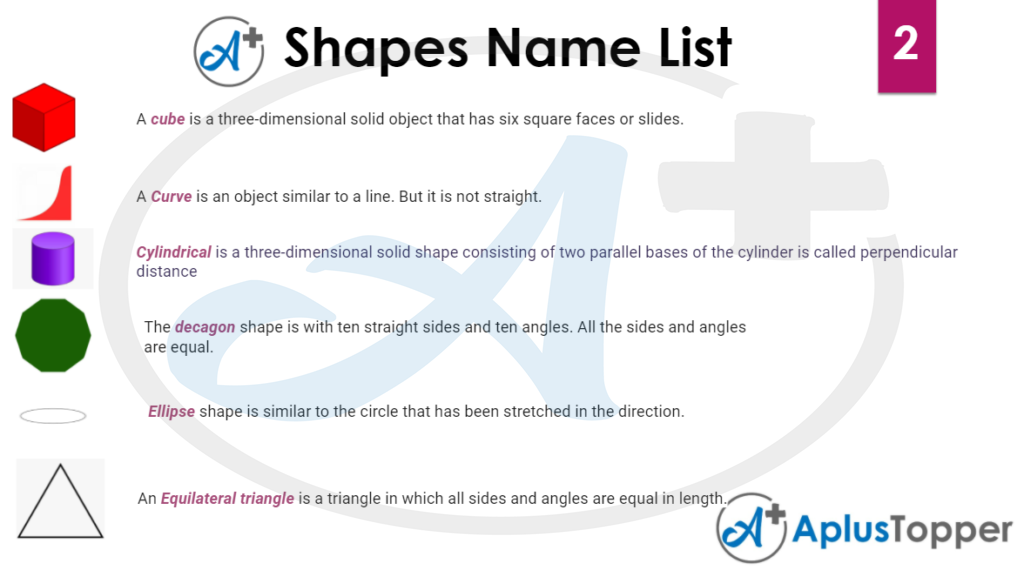 The heart is used to express the idea of the heart. The heart symbol is often used to represent the center of emotion including affection and love.

Hexagon is a 2D geometric polygon that has six sides and six angles. It has curved sides and all the lines are closed. The hexagon has four different types: regular hexagon, irregular hexagon, concave hexagon, and convex hexagons.

Kite is in the shape of a quadrilateral. Kite is a four-sided shape with straight sides. The two opposite sides are equal in length.

The line is a continuous extent of length, straight and curved. It has no breadth and thickness. A line is made up of an endless number of points, it is a 1D straight figure. 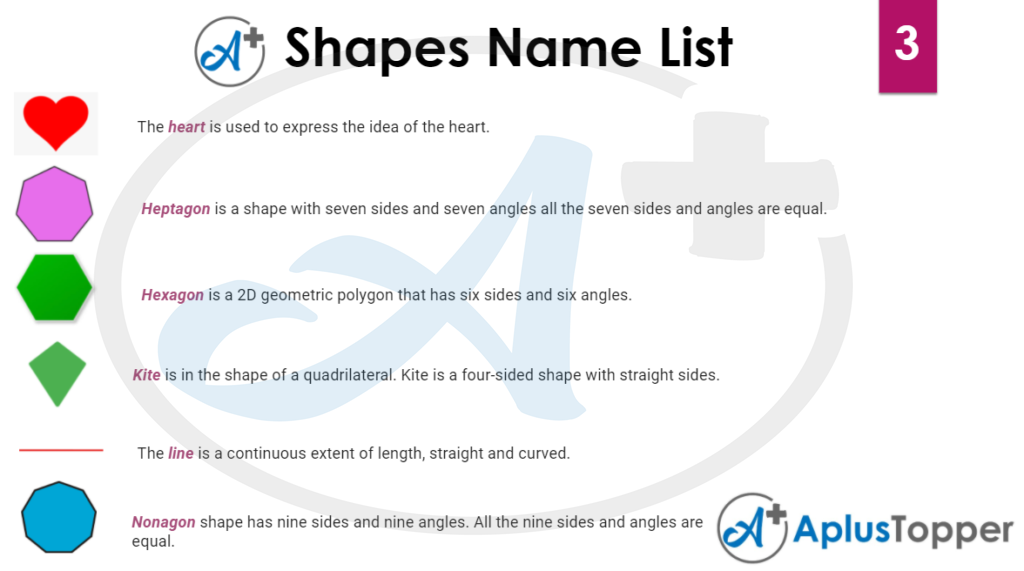 Octagon has eight sides and eight angles. It is called an eight-sided polygon; there are twenty diagonals in an octagon. Octagon shape is used as a design element in architecture.

The oval shape is similar to the circle. It is an elongated shape with no straight lines or corners, for example, the number zero is in the oval shape.

The Pentagon shape has five sides and five angles. The sum of the internal angles is 540. All the sides and angles are equal. School crossing signs on the roads are in the shape of the Pentagon

Pie shape is a part of a circle. The pie looks like a triangular prism. If the triangular sides are parallel and congruent. It is in the form of a wedge. Pie diagrams are used to represent the graphical representation.

Polygon shape is used in geometry. It is a flat and closed figure with three or more sides. It is a two-dimensional object. Examples of polygons are triangles, hexagons, pentagons, and so on. 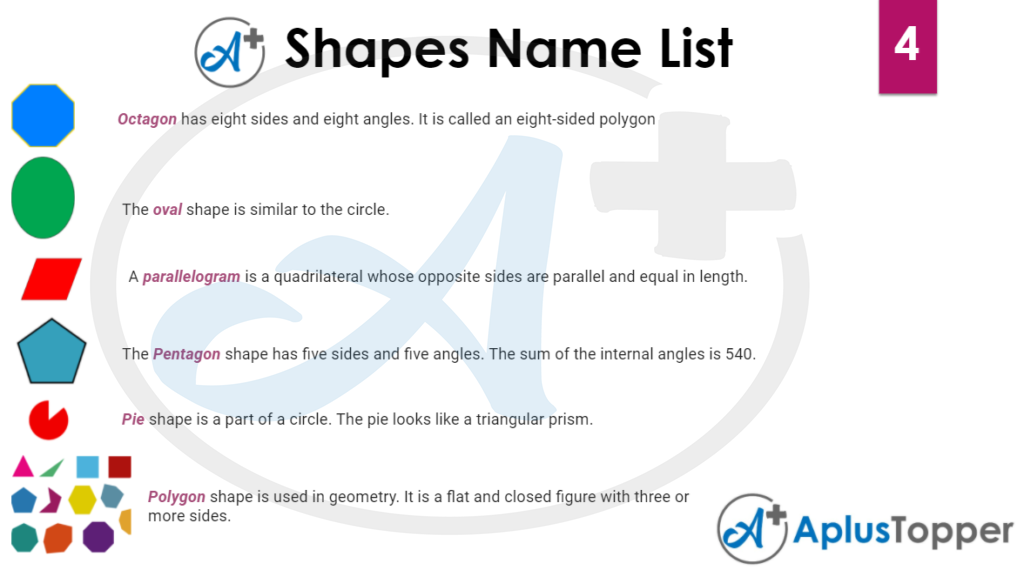 A quadrilateral shape is a closed figure with four sides. The opposite sides are parallel and equal in measurements. It does not have any right angles. It is a two-dimensional shape that looks like a kite.

Quatrefoil shape is an symmetrical shape that forms overlapping circles of the same diameter. It is found in art and architecture. It is a delicate and feminine shape.

Rectangle shape has four sides, the opposite sides are equal, it has length and breadth. And it also has four edges. It is a two-dimensional shape.

Rhombus is a quadrilateral, It has two pairs of opposite sides that are parallel and all the sides are the same in length measurement. The rhombus looks like a diamond, it is a two-dimensional shape. A ring is a hollow circular shape. The top view of the cone is like a ring.

Semicircle is referred to as half of the circle. The arc of the semicircle always measures 180 degrees. It has no vertices and the diameter of the circle cuts into two equal semicircles.

The square shape has four sides, all the sides are equal. It is a two-dimensional shape. It is in a closed shape. It has four right angles. For example, chess boards and bread slices are in the shape of squares.

Star shape is a star polygon. It has five corner vertices and intersecting edges. It is a type of decagon. Some cultures also represented stars more like they are seen in the sky.

Triangle is a two-dimensional geometric shape it has three sides and three angles. All the sides and angles are equal. It is also called a three-dimensional polygon.

Zigzag is a shape of the line. The letter z is in the shape of a zigzag. A line drawn in a zigzag shape makes a lot of sharp turns. The first turn of the line is zig and the second turn is zag. 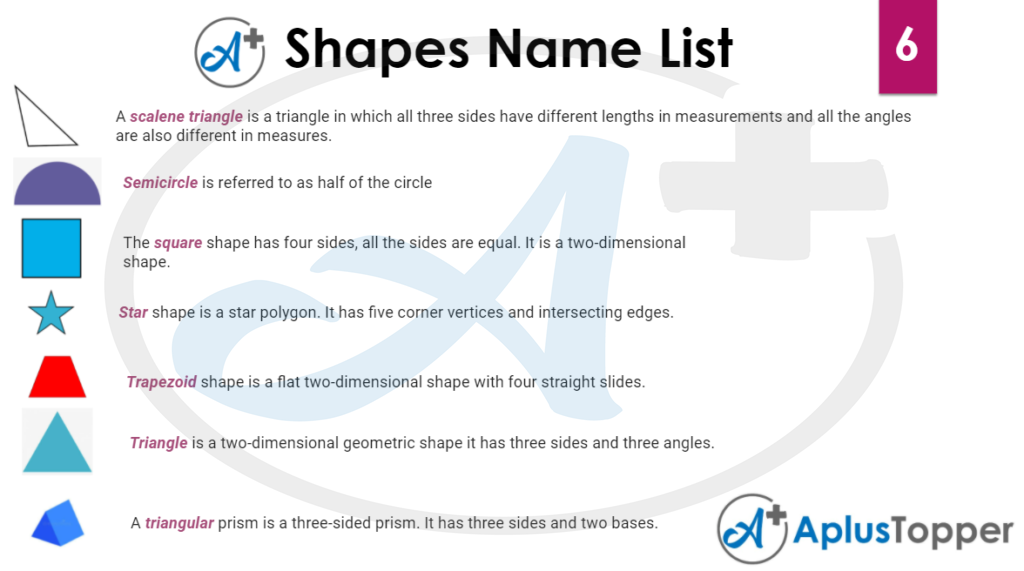 The name list of colors with pictures are discussed here.

Azure is the color between cyan and blue on the spectrum of visible light. It is described as the color of the sky on a clear day. Azure is created by adding a little green light to blue light.

Brown is a natural color associated with the earth. It represents wholesomeness, warmth, and honesty. We can also use brown to give the impression of a well-established heritage and a sense of tradition. Most of the chocolates are brown.

Blue is a calming color that represents intelligence and responsibilities. Blue is cool, relaxing, and peaceful. Blue is also the natural choice for professional networks.

Black is an incredibly versatile color and it is used for graphic design. It is associated with power, elegance, and sophistication. It is the favorite color of modern brands. Newspaper logos also tend to be in black.

Charcoal is a lightweight block of carbon. It is produced by strongly heating wood in minimal oxygen to remove all water and volatile constituents. Charcoal is used for outdoor cooking.

The coral color is a shade of orange. To get the coral we use different shades of oranges or red. It is a warm color.

The crimson color is a deep red color including purple. It is the natural color of Nepal. They are often used on Christmas trees in churches and Christmas homes.

Cyan is a color between green and blue on the visible spectrum of light. It is the primary color. It is also called greenish-blue.

Fuchsia is a vivid purplish-red color. The fuchsia plant has fuchsia-colored flowers. It is sometimes described as hot pink, reddish-purple, vivid pink, and light purple. Fuchsia is a mixed warm or cool color. Gray is a more mature, responsible color; it indicates professionalism, formality, and conventionality, we are more likely to see the gray color as a secondary color playing a supporting role to some other colors.

Green is universally associated with nature. The plants, grass, and trees are green. Famous brands like Starbucks and Whole Foods Markets use green shades.

Hot pink is a shade between light pink and dark pink. It can be created by mixing red, blue, and purple. It is seen in nature that the colors similar to hot picks are pink and violet.

The ivory color is a half-white color it is the material made up of teeth and tusks of animals. It slightly looks like a light yellow. The bird’s ivory gull and the ivory-billed woodpecker are in ivory color.

Khaki color is a light brown color. The khaki fabric is used for military uniforms. It is flattering and chic regardless of hair color and skin tone.

Lime is the color is the shade of yellow and green. The citrus fruit is in the lime color. Fire engines in the United States are lime-colored.

The magenta color is also called purplish-red, reddish-purple. It is the middle color of red and blue, the magenta and fuchsia are exactly in the same color.

Navy blue is the dark shape of the blue color. It is the color of uniforms for navies. Navy Blue indicates power, authority, and importance.

The orange color is vibrant and energetic. It can be a great choice for a youthful and creative brand that wants to be a bit different from the mainstream. It can be used as an accent color to catch the eye and promote activity.

Olive is a dark yellowish-green color. It is the color of olive leaves. It is used to represent the piece. Olive also looks like smashing with brighter tones such as purple, blue, and orange.

The peach color is named as the pale color of the interior flesh of the peach fruit. Peach is a warm shade of pink-orange. It can also be described as pale, yellow, and pink.

Purple is an interesting color, it indicates luxury, mystery, and spirituality. It is both warm and cool and combines passion. The purple dye is more expensive. 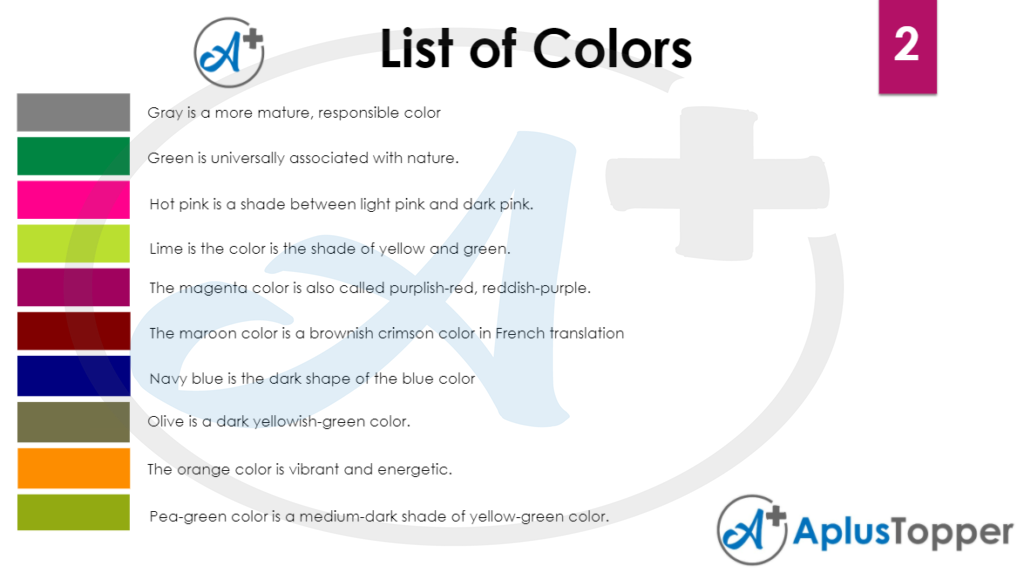 Plum color indicates the royal, romantic, luxurious and uplifting. It looks like a brownish-gray ting or reddish-purple. It is the average color of plum fruit.

Red is a color that is associated with the heat of energy, love, and passion. It is the color of blood. for danger zones, we use red color boards.

The silver color is a precious metal associated with riches and expensive jewelry. It has a little less luxurious coming in second place but it still represents grace and elegance. Silver is like a shiny gray

White indicates simplicity and minimalism and is also used as a symbol of purity it can be very simple, clean, and modern. It is the most natural color for all.

Yellow is a color of the sun, smiley faces, and sunflowers. When we see the yellow color it gives happiness and positivity. In traffic lights, we use yellow to represent ready to go. 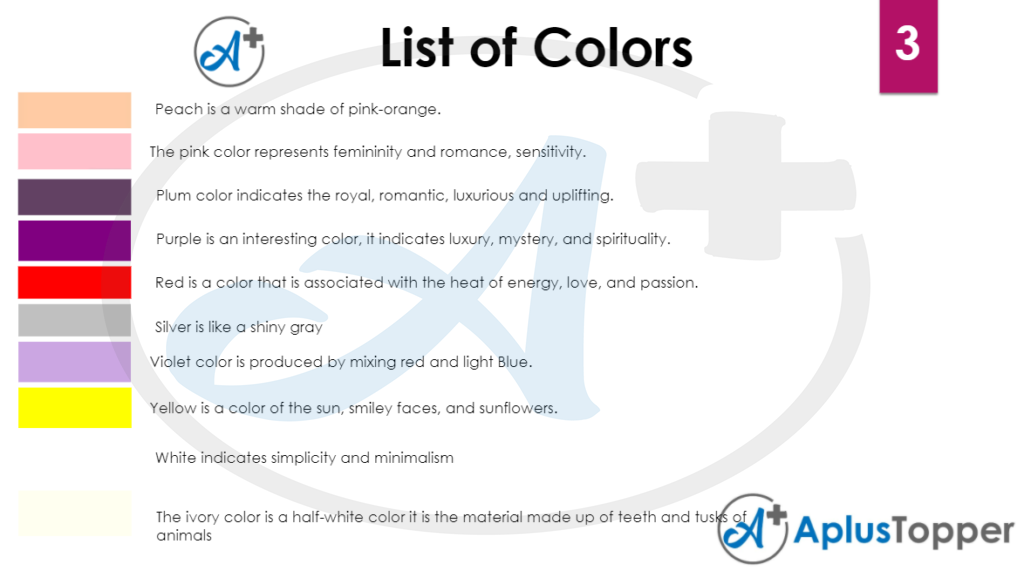