Sex Education In School Essay: One of the much debated topics across the world is the importance of sex education in schools. Sex education refers to a broad programme designed to impart knowledge/training regarding values, attitudes and practices affecting family relationships. The real purpose behind sex education is the transfiguration of a male child into manhood and of a female child into womanhood.

Long Essay on Sex Education In School 500 Words in English

Below we have given a long essay on Sex Education In School of 500 words is helpful for classes 7, 8, 9 and 10 and Competitive Exam Aspirants. This long essay on the topic is suitable for students of class 7 to class 10, and also for competitive exam aspirants.

It is the education that provides knowledge on physical, social, moral, behavioural and psychological changes and developments during puberty. It teaches the adolescents about the role of boys and girls in family and society, responsibility and attitude of boys and girls towards each other, etc within social context.

Sex education is never the most pleasant of the conversations for an adult and child to have. Yet, it is an essential one that many feel should happen in a responsible and safe environment. Due to increasing incidences of HIV/AIDS, RTIs/STIs and teenage pregnancies, there is a rising need to impart sex education. Parents and counsellors in Delhi argue that banning sex education is not a solution and will prove disadvantageous instead, given the exposure kids have to the internet.

There is an ocean of distorted information available at the click of a button on the internet. It hardly throws light on issues like gender equality, marital sexual relationships or even violence or abuse on sexual grounds.That is why schools should take up these classes starting from as early as class VI, so that the students are comfortable approaching their teachers before turning to unreliable sources of information online.

The sole aim of such an education would be to teach children to establish and accept the role and responsibility of their own gender by acquiring the knowledge of sex. Understanding the differences and similarities between two genders; in terms of body and-mind will set up a foundation for the future development in their acquaintance with friends and lovers and their interpersonal relationship. It will also help to develop emotionally stable children and adolescents who feel sufficiently secure and adequate to make decisions regarding their conduct without being carried away by their emotions.

A study on child abuse in India, conducted by the Ministry of Women and Child Development, reports that a good percentage of boys and girls surveyed, have faced some or the other form of sexual abuse. Therefore, sex education might help the vulnerable young population to be aware about their sexual rights and empower them to protect themselves from any undesired act of violence, sexual abuse and molestation. India’s National Population Policy also reiterates the need for educating adolescents about the risks of unprotected sex. It has been seen that various schools across different cities in India are organising workshops to create awareness among students on issues like health and hygiene. Unfortunately, a complete sex education drive on a regular basis is still to be introduced in the Indian schools.

If we wefe to go by the data published by WHO, sex education should be imparted to children who are 12 years and above. It has also been seen that it is the age group of 12 to 19 years that counts for some 34% of the HIV infected persons in the world. Experts claim that “Youth in India needs sex education more than the youth in any other country since child marriage ensures that one not only have sex at a young age, but girls also have teenage pregnancy”.

Basically, it seems that the taboo is in the head of the leaders, not teachers. This negative approach towards the concept of sex education starts from the authorities and through the trickledown effect reaches the students also, who then approach it in a similar way. In lieu of all the controversies, several states including Gujarat, Madhya Pradesh, Maharashtra, Karnataka, Kerala, Rajasthan, Chhattisgarh etc declared that the course content as suggested by MHRD was unacceptable and thus banned the programme.

On the contrary, there is more to sex education than simply dumping facts on students, which is why many schools have hired counsellors, who deal with the topic more effectively than the teachers. And all this talk about vulgarity, it is because of how the system is approaching the topic – it’s all in the head.

If a regular teacher tries to talk about this topic with students, it can get awkward and uncomfortable, but it can never be vulgar. These sessions are always held by people who are trained to do it. Counsellors who can talk about these subjects without blinking an eyelid, are the ones who help in making the students confident too.

Sex education is a part of the syllabus from class VIII onwards anyway, when the students learn about the reproductive system in their biology classes. There are so many other issues that kids of this age group face and need to be sensitised about – dealing with rejections, getting too serious in relationships – topics that parents want the school staff to guide their kids through.

Such guidance is much needed in the present times of information overload. In fact, parents feel that it is the schools that have to be proactive and arrange for classes and sessions like these, so that the day the child is curious, he gets the answers from trained professionals and not from some anonymous website. 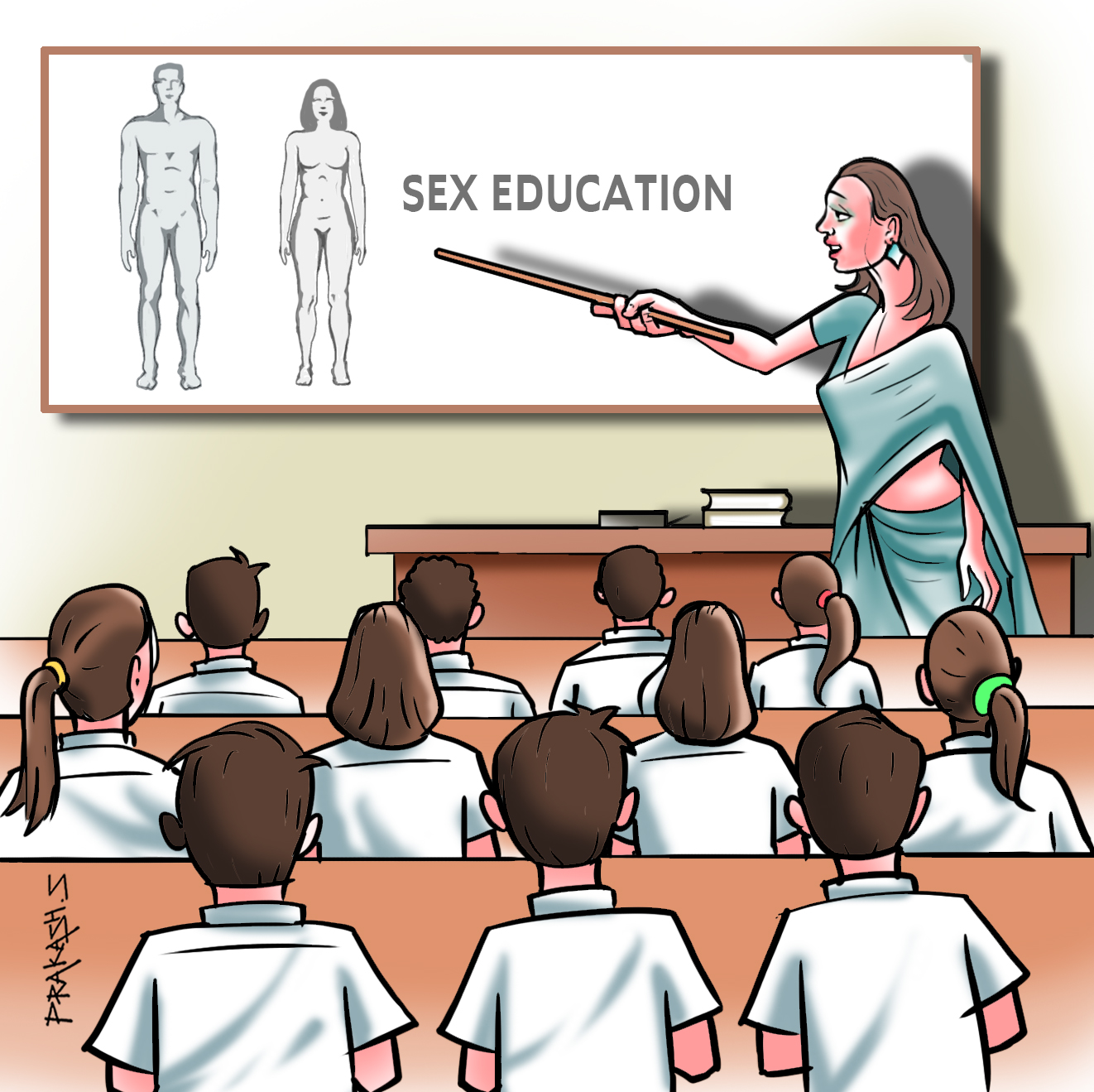 Short Essay on Sex Education In School 200 Words in English

Below we have given a short essay on Sex Education In School is for Classes 1, 2, 3, 4, 5, and 6. This short essay on the topic is suitable for students of class 6 and below.

The biggest advantage of sex education in India is perhaps, it will help the country fight against the tremendous spread of AIDS. Also sexual exploitation is spreading at a high rate wherein the small kids are the highest prone to such incidents.

If we go back to the history of sex education in India, we’ll find that spread of awareness was started as a result of the concern for population growth. Hence, family planning programmes were launched during the 1950s; but it was in the 1980’s that the government launched the National Population Education project. The project saw textbooks promoting the idea of a small family and highlighted the fact that increase in population leads to poverty.

Evidently, a comprehensive sex education can help the present generation live a secured life. Sex education cannot be a typical educational practice in school; it should cover all psychological, physiological and social issues that can force a person to think about the urgency for this kind of awareness among school goers.

Children reaching the teen phase, starts showing peculiar behaviour that can grow up into bigger problems in future, if not given the right knowledge at the right time. An effective sex education at school along with adequate communication between parents and children at home can bring about a lot of change.